The G.H. Mumm Champagne was flowing for Luna Rossa Prada Pirelli who sailed to victory today in the PRADA Cup Final. The Italians winning the Series 7-1 over INEOS TEAM UK, now move onto the America’s Cup Match, the ultimate goal four years in the making, starting in 12 days time.

Luna Rossa Prada Pirelli outraced the British team in today’s medium to light conditions that proved to favour the Italians so markedly.

For the second time in their six attempts, Luna Rossa Prada Pirelli have their name included in the exclusive list of just 36 challengers in 170 years that have made it to the America’s Cup itself.

As happened 21 years ago, the Defender Emirates Team New Zealand will face Luna Rossa Prada Pirelli on the Hauraki Gulf to decide who will win the oldest trophy in international sport.

All eyes were on the start. Based on the previous races in this PRADA Cup Final it was the opening stages of the race that frequently defined the result. 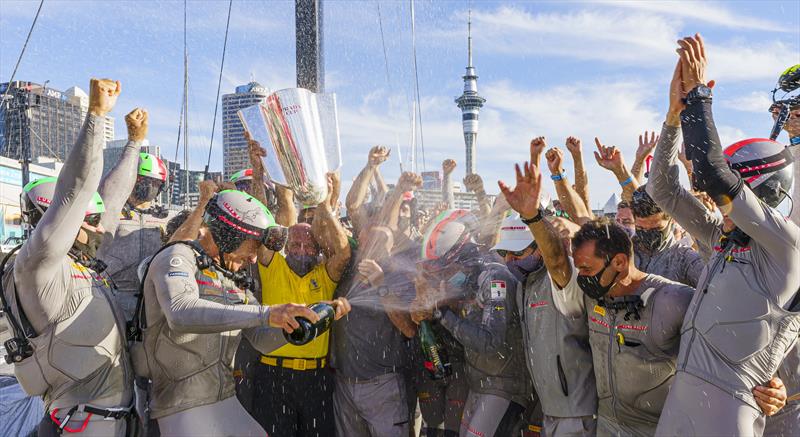 After facing five losses in a row, INEOS TEAM UK had shown that winning the start in race 6 could lead to winning the race overall.

Today, as the British led into the start line after having escaped the clutches of Luna Rossa Prada Pirelli just moments before, the early advantage was to INEOS TEAM UK. But it didn’t take long for that to change.

With both boats heading off the line on starboard, Luna Rossa was to windward in a tricky position as they tried to keep the pace on while sailing in the disturbed air off the back of the British boat. 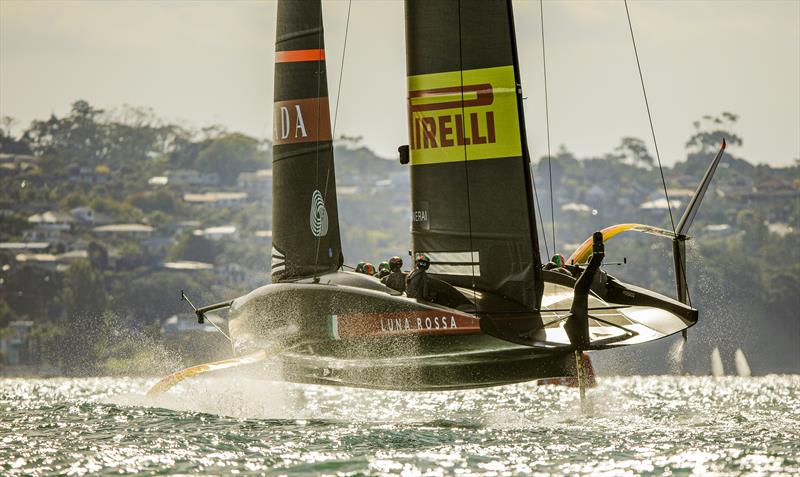 As both boats headed out towards the left-hand side of the course it was clear that the Italians had the extra mode that has been talked about during previous races allowing them to sail higher than their opponent while maintaining the same speed.

As both boats tacked at the boundary, Luna Rossa was still to leeward but now they were ahead. Their second punch was about to be delivered.

As they squeezed their way up to INEOS TEAM UK they did so without losing any pace once again and eventually forced the British to tack. Advantage Luna Rossa.

Complete confirmation came when the pair came back together the next time, Luna Rossa was clearly ahead.

From there the pedal went down to the floor on the Italian boat. They passed through the first gate 16 seconds ahead. By the bottom they had increased this to 0:21 and by the top for the second time they were now 1min 7sec ahead. Luna Rossa was running away with this race.

Meanwhile, since shortly after the start the wind speed had dropped from 15 knots at Rangitoto light house to just below 12 knots. INEOS TEAM UK Skipper and Helmsman Sir Ben Ainslie had made it clear after Saturday’s race that this was tricky territory for the British. ‘We know it, they know it, that’s the challenge,” he had said. This race was providing further evidence of this. By the last windward gate Luna Rossa were 1 min 45 sec ahead of the British and only a disaster would deny them a sixth victory. 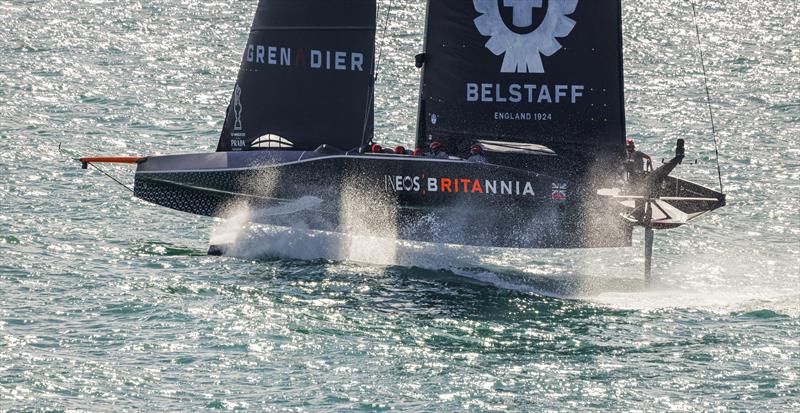 But the last leg of the race was executed as perfectly as the previous five and they crossed the line the same distance ahead. Just one more race and the PRADA Cup would be theirs. For the British, they had to win every race from here to do the same. The next race would be absolutely crucial.

“We’re super happy, for sure we are very close but we have to stay focussed,” said Luna Rossa’s co-helmsman Francesco Bruni after the finish. “We definitely have the high mode.”

For the British Skipper things had clearly got even tougher.

“We’ve got to win every race from here so it gets pretty simple,” he said. “We’ve been trying everything we can to get on top of it, but clearly at the moment we can’t.”

Seconds before the pre-start action began, the on board communications aboard INEOS TEAM UK between Skipper Ben Ainslie and his tactician Giles Scott suggested that they had a new move to try.

As Luna Rossa Prada Pirelli came charging into the start box on port, the British were quick to gybe as they entered the zone and chased the Italians out towards the right-hand side of the pre-start zone. 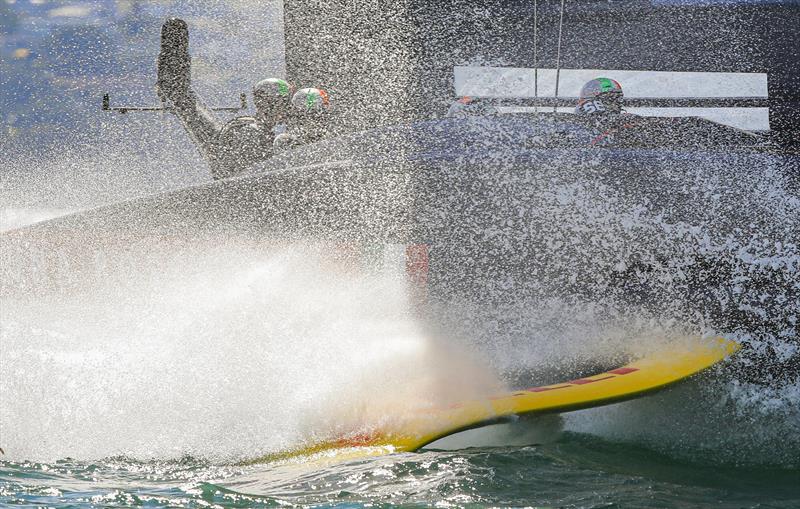 As the boats arrived at the right hand boundary Luna Rossa tacked around while INEOS TEAM UK gybed. The result was to create separation between the two, but it didn’t last for long.

As the pair headed towards the start line INEOS TEAM UK were ahead and to windward, Luna Rossa were chasing from to leeward, but both were early for the start. Slowing down was going to prove tricky, there was very little runway left, especially for the British.

Seconds before the start, INEOS TEAM UK tacked onto port and just managed to stay behind the line but most importantly just managed to cross Luna Rossa who were on starboard and had right of way.

But the close quarters action had seen Luna Rossa start with a penalty as they headed out on starboard leaving the British to head off on port tack.

But, despite having won the start and the first part of the upwind leg, when the pair came back together for the second time the advantage had switched, Luna Rossa were ahead as they crossed on starboard.

From here there was little engagement with each boat taking opposite sides of the course. As they came into the top gate Luna Rossa were on port and took the right hand mark, INEOS TEAM UK took the left hand mark. For the initial part of the leg the British had more breeze on the left-hand side of the course allowing them to stay close. The physical distance on the water was 160 m. 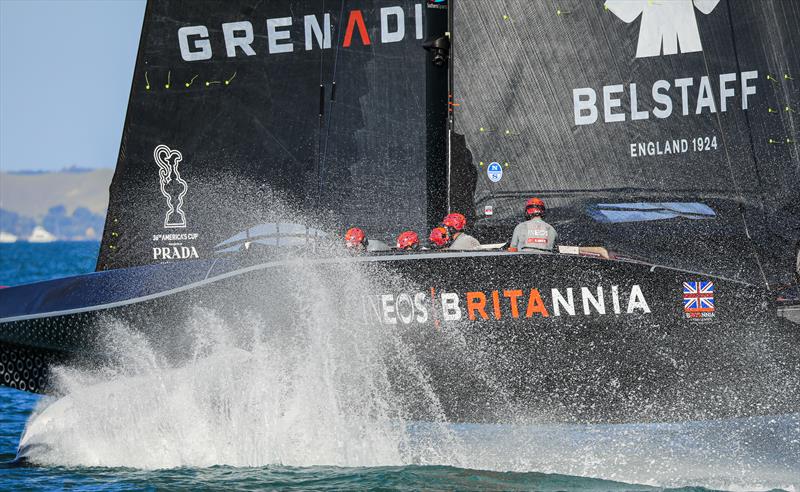 “We’re going to have to do something special here,” said Skipper Ainslie to his tactician over the on board comms.

Meanwhile, the breeze was staying steady at 12 knots.

By gate 2 Luna Rossa had maintained their leading margin of 12 secs as they rounded the left hand mark. In an effort to keep splitting from their opponents, INEOS TEAM UK took the right hand side of the gate.

On the second upwind leg the racing took place mainly on the right had side of the course, great for the spectators.

After the fourth leg, as the pair approached gate 3 Luna Rossa had increased their lead. As they rounded the left hand mark they were now 34 secs ahead a distance in the water of around 400 m.

Another lap of the course and the Italian lead had grown and never looked likely to reduce. By the finish Luna Rossa Prada Pirelli were 56 sec ahead. They had scored their seventh victory. They had now won the Prada Cup trophy.

Having resisted high fives and open displays of celebration in the races leading up to this point, now there was no holding back, the Italians were over the moon.

“We kept the mistakes down, stayed calm, made good decisions and the boat did the job.” said co-helmsman Jimmy Spithill.

“Pretty good day at the office,” he then said when asked on TV how he felt, clearly struggling to shake off the understated approach that had served them through the final.

Sir Ben Ainslie, INEOS TEAM UK Skipper & Team Principal congratulated his opponents. “Well done to Luna Rossa and well done to Italy. It’s a big deal in Italy to get into the America’s Cup again. So congratulations to the team, to Jimmy and Checco and all the boys, they sailed brilliantly and deserve to take the Final. Hats off to them we are obviously disappointed we didn’t get through but we are to go away, back on the drawing board and see what we can do.”