Pieter Taselaar’s Bliksem held off the competition and won the second event of the Miami winter series.

A happy Pieter Taselaar comments, “We were in first Day One, and it’s always a challenge to hold on to that. The pressure is on and we held our own.” The team now takes over the lead in the winter series that concludes in March.

In second place was Jen Wilson with Convergence. Although the team is not unfamiliar to being on the podium, the victory was made extra sweet by beating brother Don Wilson on Convexity in 4th. “We are all very competitive in the family……we are particularly happy to beat Convexity,” says a smiling Jen Wilson. “We came in a day early to get a little bit of extra practice and that certainly paid off.” 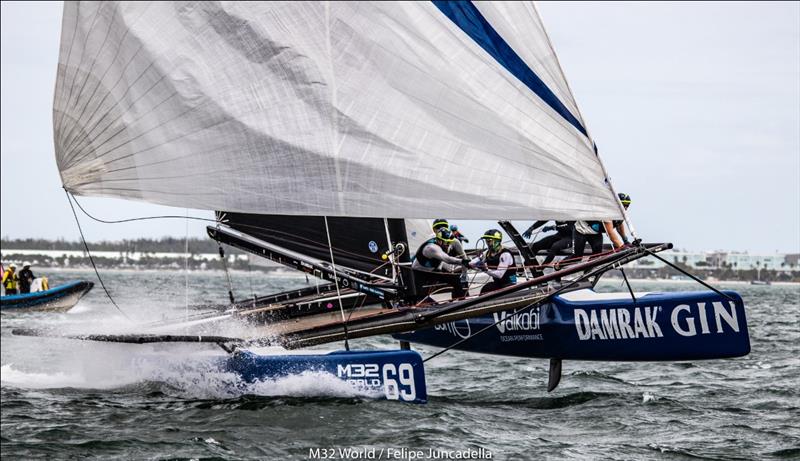 First time on the podium in Miami was Richard Davis’ Swiss team Section 16. The team showed good consistency in the big breeze on Sunday. “It was a solid day, keep the hammer down… got to be in it to win it,” says Richard Davies, who is also a board member of the M32 Class Association and adds, “We are going to keep building this fleet. It’s such a fun boat for owners to sail. The bang for the buck is really strong… ” 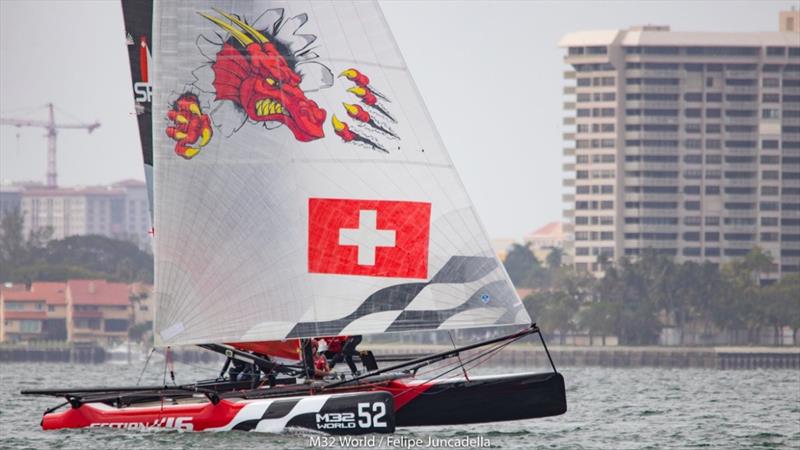 After the official practice racing on Friday, 10 scoring races were sailed over Saturday and Sunday. The Sunday racing was inviting for teams with sunshine and high winds. “Gusts close to 25 knots are at the high end of the envelope for the M32s,” says Class Race Officer Mattias Dahlstrom and continues, “I’m impressed with the skill you see by all teams handling the boats and making it some great racing to watch.”

The racing was run in the M32 racing style, with 20 minutes races, a reaching start, and short breaks between races. Two teams, Ryan McKillen’s Surge and August Schram’s Stella Maris, are both known on the sail racing scene but did their first M32 regatta and was seen at the front of the fleet in some races. Out of the 12 teams competing, 6 had a race win, and the distance from first to last boat at the finish is often very small.

The next event is March, and the Series is wide open with Bliksem one point ahead of Convexity. Not far behind is Convergence, followed by a group of six boats fighting for the podium. This group is led by Extreme2, Midtown and Inga from Sweden who have all displayed race wins in the last events. The winning team will bring home the highly sought after Rooster Trophy, which is given to the winner of the Miami Winter Series.

Although March marks the end of the fight for the Rooster Trophy, the fleet has extended their stay in Miami with another event in April. The “M32 Sandbar Cup” will score as a separate event and have more liberal rules when it comes to changing skipper and crew between races. “This will give teams an opportunity to invite friends and have them try the racing in a relaxed way,” says Dave Doucett of M32 North America. The M32 Demo Boat has proved a popular way for new teams to join the class and will be available for the Sandbar Cup in April.