Within the Gitana racing stable, the winter refit is on the final straight. In fact, in a little less than a month, the Maxi Edmond de Rothschild will leave her shed in Lorient and head over to the pontoons that make up the Base.

Once there, she will be equipped with a brand new starboard bow and, most significantly, we’ll get the chance to discover her new skipper.

Following the end of its collaboration with Sébastien Josse, which began some eight years ago, 2019 will see the five-arrow team opening a whole new chapter of a saga that spans more than a hundred years.

Since the origins of Gitana, and all the more so with the creation of Gitana Team in 2000 by Baron Benjamin de Rothschild and his wife Ariane, the passing on of knowledge has been of primary importance in the family’s commitment to sailing. With programmes heavily focused on singlehanded sailing over the past few years, punctuated by the Vendée Globe and more recently the Route du Rhum, team sailing had been put to one side, now the owners of the five-arrow racing stable intend to put it centre stage once more. 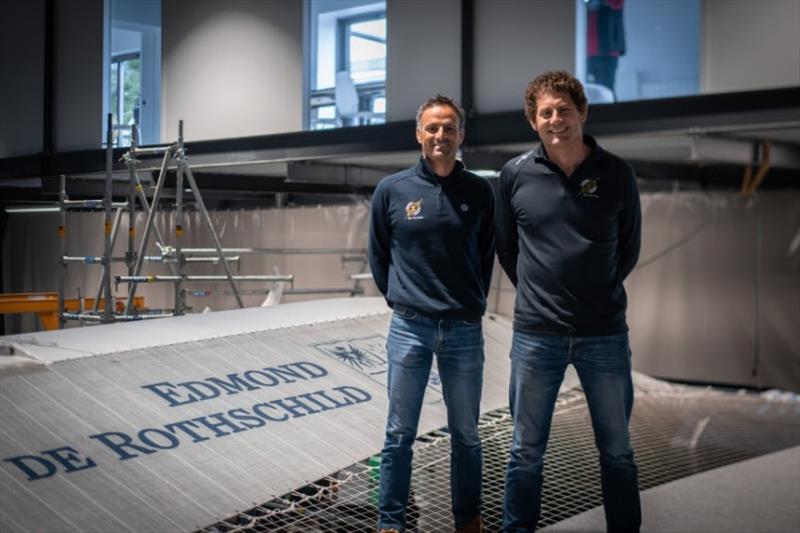 Combination is the solution

To make this happen, which they believe to be essential to success of the project, the team owners have opted for an innovative organisation in terms of the French offshore racing landscape. As such, it is not one new skipper who has been designated to take the helm of the Maxi Edmond de Rothschild, rather it is a pair of experienced sailors who will share the sports programme lined up for the Maxi Edmond de Rothschild.

Franck Cammas and Charles Caudrelier have been chosen to pull off what is an ambitious challenge from a sporting and technological aspect. Particularly considering that this latest addition to the Gitana fleet remains a pioneer in offshore flight.

They will work together with the members of Gitana Team, each of them with their share of the singlehanded highlights, but with the focus on numerous crewed races. These latest additions to the Ultim 32/23 class programme and notably the round the world race setting sail from the Mediterranean in 2021, now offer teams the prospect of creating a dynamic network akin to that put forward by the ORMA circuit nearly twenty years ago. This will enable emerging talent to be identified and trained, which is something Ariane and Benjamin de Rothschild feel strongly about. 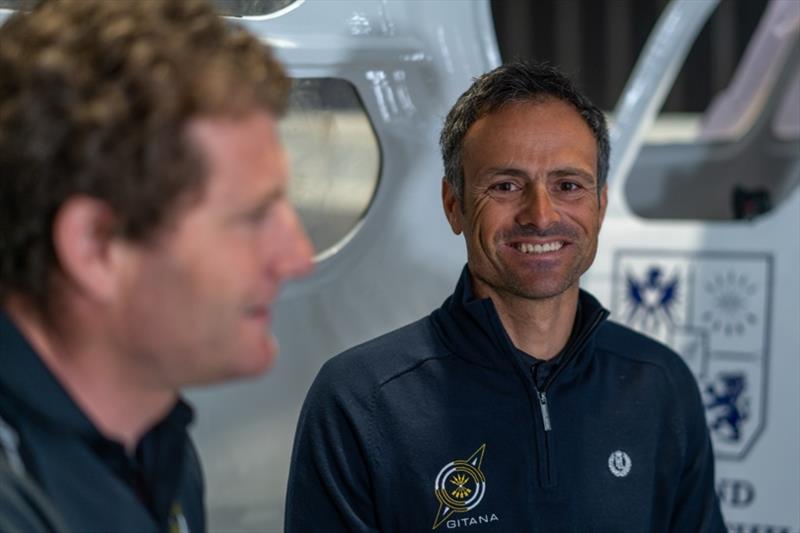 “I’m very happy to be welcoming Franck and Charles into the Gitana Team fold and more broadly into the fold of our Group. This choice marks the combination of two very fine talents as well as expressing our desire to ensure there is constant succession in all the activities we undertake. For the past two years, with the addition of the Maxi Edmond de Rothschild to our family line, Gitana has entered a whole new dimension, that of flying boats. The highly complementary profiles of our two sailors will be a great asset in supporting this fabulous craft in her development. I have a very deeply held conviction that there is strength in numbers and the announcement of this skipper pairing at the helm of Gitana 17 bears witness to this,” states the owner of the Gitana fleet.

Associating two great sailors around a common goal. This choice may come as a surprise, yet within Gitana this rather atypical scenario very quickly showed itself to be an obvious step forward, especially so with the personality and complicity of the two skippers lending themselves to such a set-up: “Following the end of our collaboration with Sébastien Josse we were looking for a skipper to take the helm of the Maxi Edmond de Rothschild. During the interview process, despite it being carried out on an individual basis, we very quickly got onto the subject of sailing double-handed as the main event of this sports season 2019 is the Brest Atlantiques, a double-handed transatlantic race spanning 14,000 miles, which is a half circumnavigation of the globe… This new event specially designed for the Ultimes will set sail on 3 November! That’s just around the corner and it’s a mighty challenge for a sailor who will be just discovering the craft in late May, early June. For this race, the duo made up of Franck / Charles fairly quickly became an obvious move, all the more so given that each of them immediately echoed a desired to work together. Over the ensuing series of discussions, another perspective began to emerge before us, one that involved a long-term pairing,” explains Cyril Dardashti, Director of Gitana.

Complicity, respect and complementarity… The reasoning behind the Franck Cammas / Charles Caudrelier association has its roots in these three words. These two sailors have known each other for a very long time. They have a deep mutual respect for one another and they have never made any secret of their desire to work on a joint project. Today it’s a done deal. Why did you agree to this unique arrangement that involves you sharing the helm of the Maxi Edmond de Rothschild?

Charles Caudrelier: “The primary reason is the pairing offered to me! I know Franck very well and I’ve always enjoyed working with him. We sailed our first races together, we share a strong complicity and we’re extremely complementary. He’s always brought a lot of energy to the plate table and it’s thrilling to be alongside him. The second reason is that with the Ultimes, we’re entering a whole new era. We’re beginning to fly and we’re discovering new things. These are big projects to carry so being part of a pairing is a dream, because when it comes to making decisions, it’s always interesting to share your viewpoint with someone else. In the bid to perform well, it’s a real luxury which just didn’t exist, but here we are in the perfect configuration to really get the best out of the boat.”

Franck Cammas: “I’ve agreed to share this project with Charles for two key reasons; the first is that it’s an exciting project with a well-designed boat with which we’ll be able to evolve in an interesting class with a high-performance team. The second, obviously, is that Charles and I know each other inside out. We’ve done a lot of sailing together and we’ve built some fine victories together. I really trust his intellectual honesty and the brainstorming we can do together. We know that we’ll never hide things from one another and that we’ll always try to help each other. Each of us is fairly humble with regards to what we need to do and our environment. We’re fairly curious and I really like his mindset and his way of working so this arrangement suits me down to the ground.” 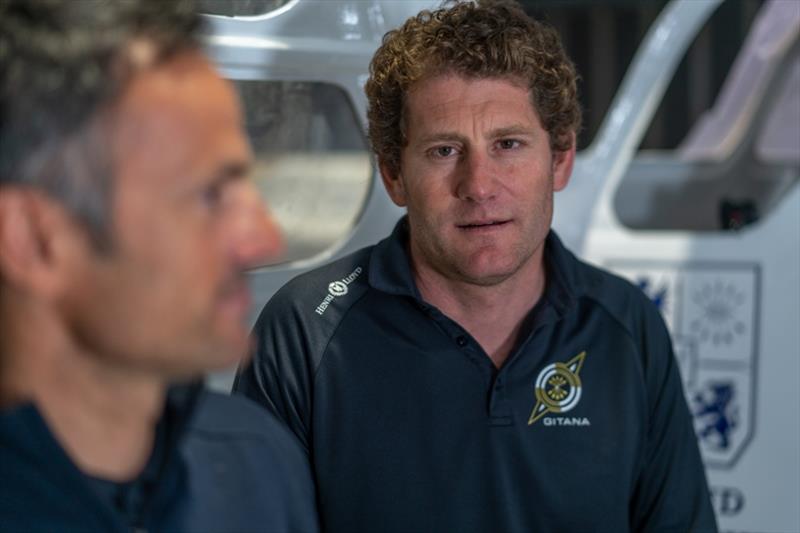 How do you envisage this future collaboration?

CC: “I’m very familiar with the Gitana team having sailed in it between 2013 and 2016 with Sébastien Josse. I know its strengths and weaknesses and I know how the team operates. Franck will bring a new take on proceedings, a new way of doing things. He’ll reenergize the team because we know he always pushes the envelope. He’s a mover and shaker, in the finest sense, who is always keen to innovate and drive a project forward. Franck has a massive amount of expertise and technical know-how, whilst I know how to create a mindset and lead men.”

FC: “I’m really lucky to be able to collaborate with Gitana Team. It’s one of the best competitive teams in France, internationally even, with genuine experience, a solid history and individuals who perform at an extremely high level. I know that we’ll be able to progress and pull off some ambitious feats together. From now on, we are the guarantors of a history, which Ariane and Benjamin de Rothschild have forged with their family for more than a hundred years through their boats. It is with very great pride and also a great sense of responsibility that we take on that mantle in the best possible way. We are all too aware of the weight of history and that adds a rather positive layer of stress to our mission and drives us to excel.”

What does the Maxi Edmond de Rothschild represent in your view?

FC: “The Maxi Edmond de Rothschild is the best there is for this size boat. She’s a quite exceptional boat, devised by a different architect to the rest of the fleet. The basic concept is very sound and something that isn’t shared by the other competitors and that in itself is obviously an advantage. Since her launch and in recent months out on the water the boat has shown real potential. However, like all boats, you have to constantly develop her and get her to progress; the competition is progressing and we must progress faster than them. I’m really keen to get back out on the water at the helm of the Maxi Edmond de Rothschild. It’s really inspiring to get back offshore again after an absence of more than eight years.”

CC: “The Maxi Edmond de Rothschild is a highly innovative boat, which is ahead of her time in relation to the maxi-trimarans from the same generation. She has posted some stunning performances and she’s a notch above the others, because she’s been devised without limits and with the genuine objective of flying, whilst the others have perhaps gone for a slightly more conservative approach with more Archimedean boats capable of flight. This boat has been completely geared around flight and the results today are extraordinary. We’re reaching speeds that nobody could have imagined being able to withstand sailing offshore, even at the start of the project. She’s an incredible boat and we know that we’re unbelievably lucky to be a part of this fine project.”