From humble beginnings 40 years ago, the Pacific Cup Yacht Race has grown into an event which attracts top-tier sailing talent from not just the San Francisco Bay area but from all over the United States and beyond. In the record-setting 2016 race, Jens Kellinghusen’s globe-trotting Ker 56 Varuna VI showed up from Germany and blitzed to Hawaii in less than six days to be the second boat over the finish line in Kaneohe.

Two years later in 2018, the equally well traveled and syndicate-owned Mills 68 Prospector arrived from the east coast of the USA to set not only the fastest elapsed time in the race but to also claim the overall win.

In 2020 we see a fleet of more than 60 yachts ready to leave their mark on the race, with the appeal of sailing to Hawaii again proving undeniable to boats from all over the west coast and even the Midwest and overseas! While the race always sees a number of boats from Southern California make the multi-day journey up the coast to San Francisco for the Pacific Cup, this year we see a surge in Seattle and Pacific Northwest boats planning to make the journey down to the Bay to take part in the 40th anniversary of “The FUN race to Hawaii”.

TP 52’s have long proven themselves as a threat to win any ocean race, and Marek Omilian’s Seattle based TP52 Sonic is no different. Recruiting navigator David Rogers from the 2019 Transpac overall winner Hamachi as well as a host of talented Pacific Cup race veterans, one can expect this newcomer to the west coast TP52 fleet to consistently point her bow in the right direction and be well sailed all the way to Kaneohe; truly a force to be reckoned with. With 2018 Pac Cup veteran Alex Semanis of Ballard Sails onboard as a watch captain and sailmaker, no stone is being left unturned in tricking out this former Med Cup boat with a thorough inventory of sails to cover all the wind speeds and angles. 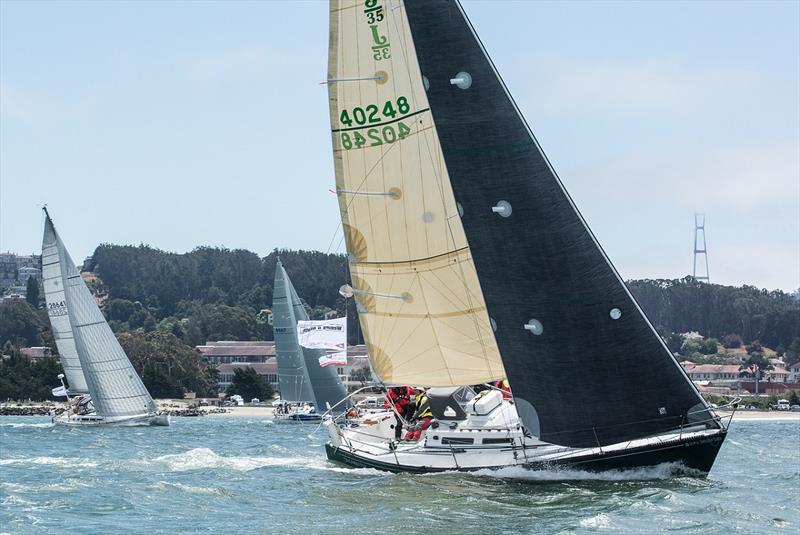 J35 Shearwater Pac Cup start 2018 © Erik Simonson feet smaller but arguably even more radical than a TP52 is Michael Schoendorf’s distinctive Paul Bieker-designed Riptide 41 Blue. A little 41-footer that rates with and races against 70-footers, Blue couldn’t quite sail to her rating in the relatively light conditions of 2018. If the breeze is up in 2020 and the little blue speedster can live on a full plane, Blue could very well surf her way to the top of the rankings. Of the big boats that also call the Pacific Northwest home, a couple of sleds are also chomping at the bit to lay down quick tracks to Hawaii and be in contention on handicap. Former race record holder Rage, Dave Raney’s Wylie 70 from Portland, is back again after sailing in the 2018 race while another Portland based 70 footer – the Santa Cruz 70 Pied Piper – has also entered just before this article went to press.

Almost certainly the fleet’s scratch boat and favorite to claim the fastest elapsed time in the 2020 Pacific Cup has to be Doug Baker’s Long Beach based Kernan 68 Peligroso. With a timeless hull form, a proven pedigree and no shortage of speed, Peligroso is a veteran of multiple Hawaii races. Sporting a highly-experienced and very pro’d up crew, Peligroso should be among the very fastest boats in fleet and a serious contender on handicap.

Also from the Northwest comes a group of ‘thirty-something’ J Boats that should be well positioned in the middle of the fleet. Karl Haflinger’s Tacoma, Washington-based J/35 Shearwater is back for her third consecutive Pacific Cup, but first as a doublehanded entrant. After a humbling race during the crew-and-gear-breaking 2016 race, Shearwater came back in 2018 and delivered a hard earned thumping of the competition to take divisional honors in the Weems & Plath B division against a group of larger racer/ cruisers. Although they will be in different divisions, Shearwater should have a good battle against Chad Stenwick’s fully-crewed The Boss, another Washington-based J/35 who will make the trip down for their first Pacific Cup. After sailing in the Victoria to Maui race in 2016 on a friend’s boat, Stenwick opted to buy his own boat and recruit some of his old crewmates to give it another go. Having already sailed a Vic- Maui, the crew was intrigued at tackling a new adventure and thus opted to deliver south to San Francisco and enter “The Fun race to Hawaii”. 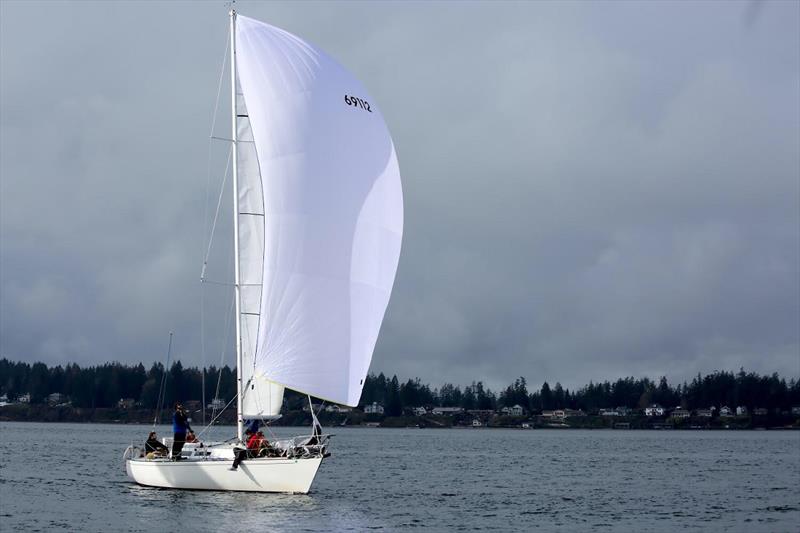 Sitting in that sweet spot of a 35-foot production racer/ cruiser, The Boss and Shearwater will likely have their work cut out for them as boats in this size and rating band always have a high number of entires in the Pacific Cup, including none other than another fully-crewed Seattle based J/35 in Jason Vannice’s Altair. Tolga Cezik’s Seattle-based J/109 Lodos told us that they are most looking forward to this Seattle show down across the Pacific. “We are stoked to race against several other local Puget Sound boats in the same rating band, hopefully enjoying warm sunshine from start to finish! We can almost taste the mai-tais already!”, said Cezik.

A cruisier entry also coming down from the Evergreen State is Steve & Sherri Smolinske’s Bellevue, Washington based Spencer 1330 True Love. Meticulously restored and brought back to life after 20 years of criminal neglect, this long-time group of friends and family will be sailing together again after many other offshore races on a variety of boats. This will be the first big offshore race for the crew on True Love, which was just recommissioned in 2018 after a four-year restoration. Among the crew is three couples and a father/ daughter combo!

International entries come from as far away as Switzerland and Japan, while David Herring’s Islander 36 Galatea is being trucked all the way from Wisconsin! A native San Diegan who’s always dreamed of sailing to Hawaii, he and his crew – veterans of several challenging Trans-Superior races – have decided to come out west and try their hands at a longer ocean race to Hawaii. Another first-time entry, this one from Southern California, is Ian Sprenger’s Santa Cruz 27 Wilder. A lifelong sailor who grew up in Sausalito dreaming of the Pac Cup, Ian had to put his dream on hold for 13 years while serving in the Navy. As soon as he got out and started his civilian job as a pilot, he grabbed a good mate and began preparing for the race. Wilder is certainly a good name for the disposition of anyone who chooses to doublehand a small ULDB to Hawaii; a unique staple of the Pacific Cup.

We wish all of these out of town boats, as well as the locals, the very best of luck in the 21st running of “The FUN race to Hawaii”! Stay tuned to this page for more articles about the race and the fleet as we get closer to the first starts on 29 June.