Ian Southworth’s Protis today won the 15th edition of the revived Quarter Ton Cup, after dominating the regatta from start to finish.

A full quota of nine races were sailed over the course of the three-day event, and Southworth’s team, which includes Led Pritchard, Lincoln Redding, John Santy and Mike Stannard, only finished outside the top three once. The icing on the cake was picking up the Coutts Trophy as the boat which won the most races, thanks to their four conquests throughout the event.

Speaking after racing, Southworth was delighted to have have finally got his hands on the legendary Quarter Ton Cup. “It feels absolutely fantastic. We knew after the first race today that we had won it and there was a lot of relieved smiles on board. It feels very good. Even today anything could have happened. Fortunately, we had a good day which sealed the project. The last race stands out to me. We were mid fleet and we ended up second in the end so it ended the event very well.” 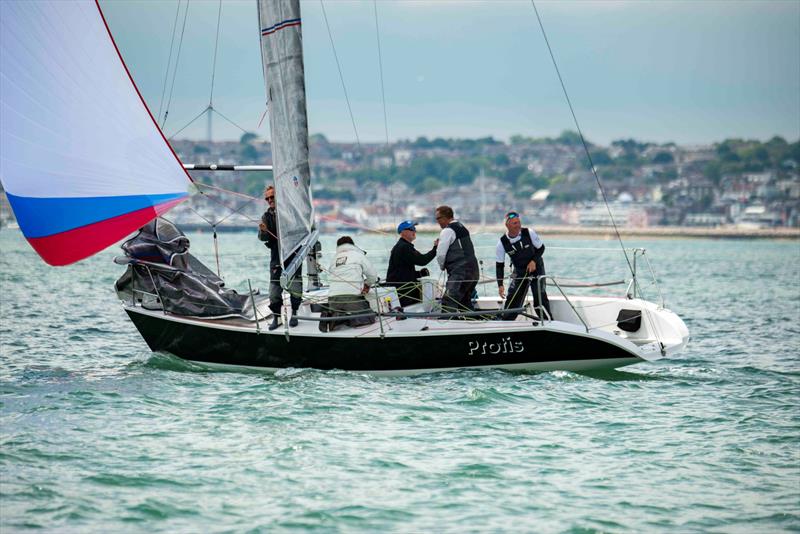 The battle for second place was fierce, with Sam Laidlaw’s BLT starting the day with a slim 2.5-point advantage over Louise Morton’s Bullet. An OCS in the days opening race for Laidlaw was followed by an OCS for Morton in the next race, with the pressure clearly showing. Two fifth place finishes today for Morton to Laidlaw’s 13th and 10th was more than enough for the two-times winner of the Quarter Ton Cup to take second place, and Morton’s crew which includes Nicky and Lucy Macgregor, Suzy Russell, Bethan Carden and Dave Lenz, ended up with a comfortable 10.5-point advantage over Laidlaw.

“The level of the competition has been amazingly tough. We knew that Protis would come out strong and we knew BLT was a new boat so we didn’t know how that would pan out. It turns out they are very quick,” explained Morton on the dock. “We went out today in a very solid third and thought we’d be content with that. Even though we were over the line in the last race we wriggled through so we are thrilled.”

The battle for fourth and fifth was equally as intense between Tony Hayward’s Blackfun and Olivia’s Dowling and her crew on Catch. The duo had a race win a-piece today and in the end it was Hayward who clinched it, seven points clear of Dowling.

In the Corinthian division for all amateur crews, it was Robert Stewart’s Hellaby who lifted the trophy, and impressively the team, which includes Jamie Blair, Nick Young, Barry Shotton and Simon Smith, finished 12th overall. 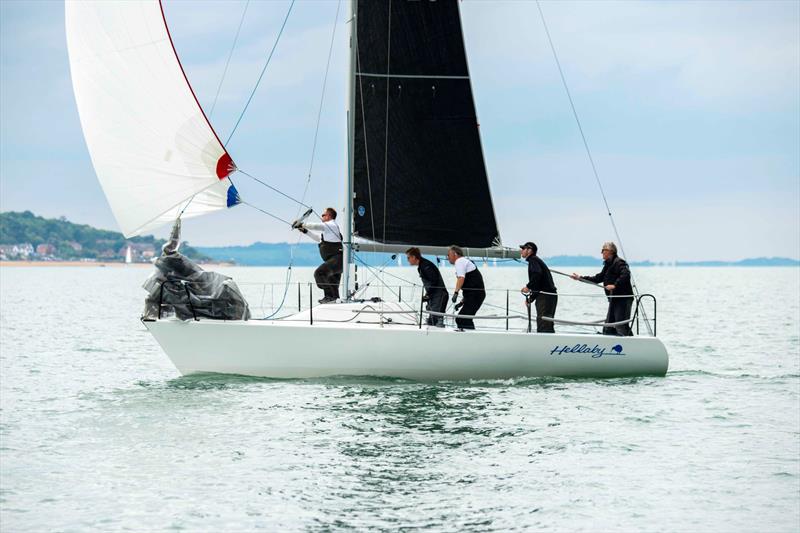 Having finished runner up in the Corinthian division in 2018 and third the year before, it was a long-overdue recognition of the teams’ talent.

“We’re pleased to have won the Corinthian division,” commented Stewart. “We were very pleased with everything up until last night, but today it went a bit wrong for us. We came down here hoping to win the Corinthian and get in the top 10. That was the plan. So we haven’t quite achieved it all but it’s been great racing.

“The level of competition is amazing. Most of these boats are extremely well sailed and if you can mix it with them and stay up there, then we’re very pleased. We are all amateurs and where else can you go and race the professionals. You can’t do that in many sports.” 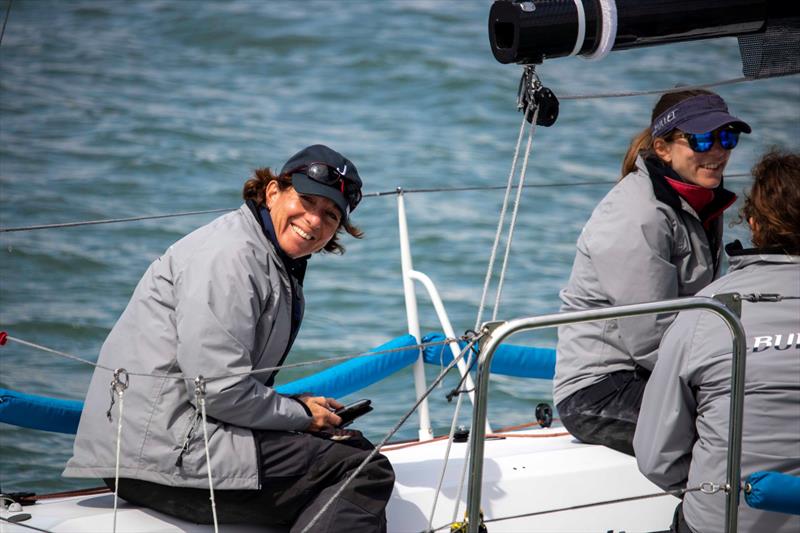 Second place in the Corinthian Division went to George Webb’s Flashheart who also picked up the Kemp Trophy as the team who most embody the spirit of the event, as Jim and George Webb have raced in all but one of the revived Quarter Ton Cups. Jim Prower’s Theseus were third.

As always the prize giving was a light-hearted affair with the Walking Stick Trophy for the oldest Bowman going to 64-year-old Jo Manser of Great Bear IV. The prize for the youngest crew went to Blackfun who have a combined age of 177, while in contrast, Ed White’s Joker picked up with prize for the oldest combined age of 288. In doing so the crew, which is quite the family affair and includes Ed, his dad Nick White and uncle John White, beat George Webb’s Flashheart by just 1-year. 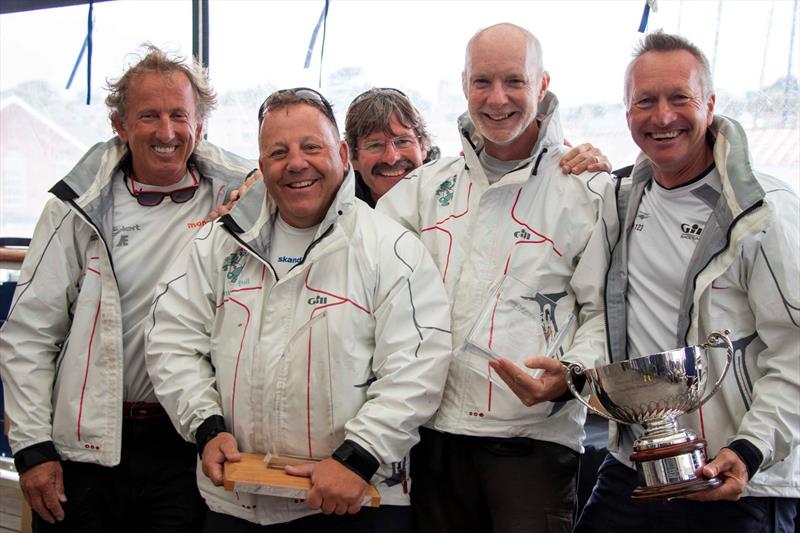 The Low Rating Division was won by Tom Daniel on Tiger, with Hellaby second, and the Marineware Concours d’Elegance Trophy for the best-presented boat was awarded to the 1974 Farr-designed Genie, sailed by Derek Morland the Tim Rees.

Class Secretary Louise Morton hailed the event a huge success, paying particular tribute to the drive and motivation of all the owners who take part. “I think the level of the fleet is very strong and the depth of owners being able to helm those boats plus the hours and the years that they’ve been putting into it is quite incredible. And the crews that they have got are excellent. The standard of the fleet is very high. I think the event has been a great success on and off the water.” 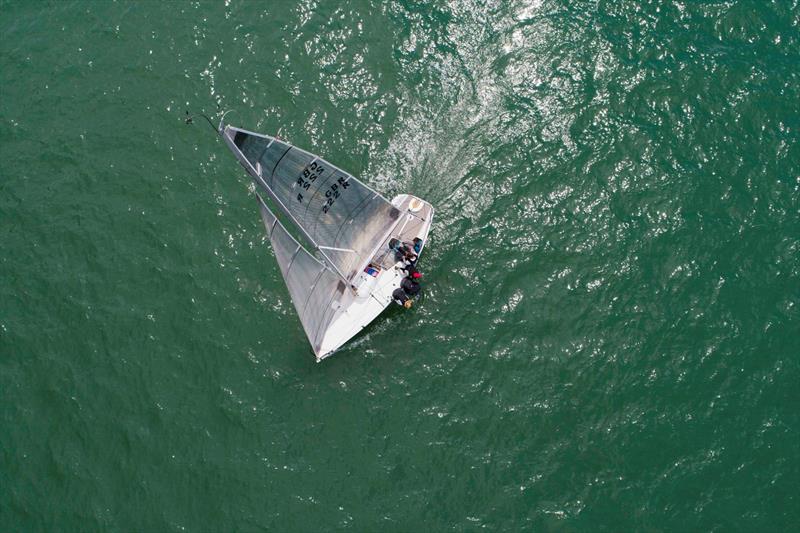 For the latest news, images and results visit quartertoncup.org