Tuesday was yet another day of extraordinary tales and adventure. The 42nd Rolex Middle Sea Race continues to live up to its billing as a blockbuster thriller.

Overnight the list of finishers had lifted from seven to 18 by 0900 CEST and is now up to 31 as more boats filed across the line. Some 40 or so crews are on the leg from Lampedusa to Malta and will be relieved to be on the last stretch home.

The weather is predicted to throw another curve ball in the next 12 hours. Winds are forecast to build substantially from the north-east thrashing the northern coast of Malta and the seas down to Lampedusa. The clubhouse leader has already changed. The British yacht Sunrise, winner of the 2021 Rolex Fastnet Race, sits atop the standings.

After Rambler ended her sixth rounding of Sicily on Monday morning, it was another 14 hours before the Volvo 70 I Love Poland, skippered by Grzegorz Baranowski and winner of 2020 monohull line honours, reached the finish. The Polish boat has been adopted by the Royal Malta Yacht Club Sailing School. The crew generously spending time with the student sailors – some as young as six years old – before the race, taking them sailing on their ocean-going maxi and then joining in some dinghy racing in Marsamxett Harbour. Lithuanian entry Ambersail 2 and the Slovenian yacht Way of Life (formerly Morning Glory, overall winner of the race in 2006) were next to finish.

The excitement really began with the arrival of Daguet 3 – Corum, which at one point looked a contender to topple Comanche. In the end, the localised weather system spinning its way from Lampedusa to Malta, on Monday, put paid to the effort. That same system is the one about to drive the ferocious winds. Its unexpected part in the 2021 Rolex Middle Sea Race overall result should not be underestimated. Frederic Puzin’s crew ended their assault at 0520 CEST and holds an unassailable lead in IRC Class Two, with Teasing Machine (FRA) in second.

“It has been an incredible experience. A phenomenal race and a lot tougher than expected,” said Neville, Commodore of the Royal Ocean Racing Club. “A major part was the leg from Stromboli. We tried a big kite for about an hour, but we could not hold it, broaching a couple of times. We then had some bad luck at Favignana, where we got shut down losing quite a few hours. Winning our class and maybe fourth overall on our first visit is a top performance for us. We look forward to coming back”

The first Maltese boat home on the water is always an excuse for the local sailing community to celebrate. When co-skippers, Lee Satariano and Christian Ripard, brought Artie III to the finish this morning the breakfast guests at the Royal Malta Yacht Club cheered their local heroes. A mere 11 minutes off top spot in IRC Class Three, after time correction, will be Artie III’s best result ever. It is someway short of the two overall victories secured by the Satariano/Ripard combo in 2011 and 2014, but this was still one to remember.

“We prepped the boat really well this year,” advised Satariano. “The race was the one we were hoping for, one that pushed us to the limit all the time. The crew were exceptional, we kept the boat intact and really enjoyed it.” 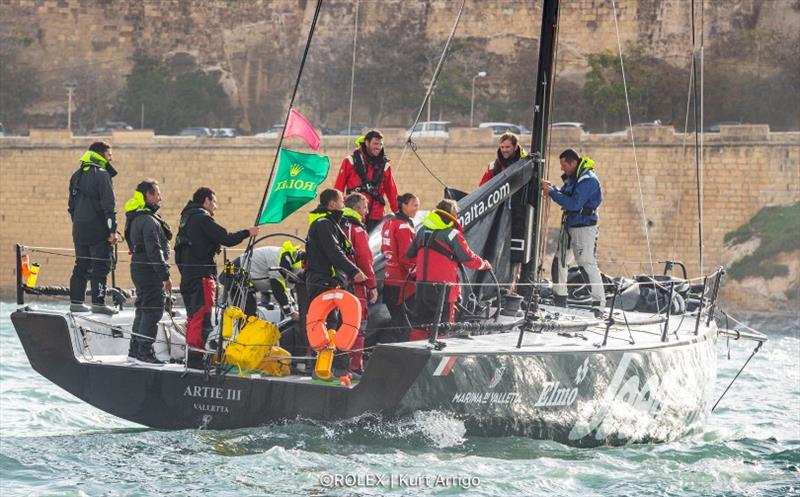 With the six best boats in this year’s 695nm Rolex Fastnet Race on the start line, competition for the podium places was guaranteed to be fierce. It looks, however, that one boat may have comprehensively outwitted the other five Rolex Fastnet boats and the entire Middle Sea Race fleet. Sunrise had been sailing a race two classes above its own, pretty well since the Messina Strait. Despite a tricky final few miles to and through the South Comino Channel, the JPK 1180 has squeezed into the overall lead of the 2021 Rolex Middle Sea Race and is on the cusp of a remarkable double. Needing to finish by 1338 CEST on Tuesday to beat Comanche, nearly three times her waterline length and rating almost twice as high, the British yacht passed Race Control at Tigné Point at 1323 CEST, to grab a 16-minute lead in the overall standings. Some 50 yachts are still competing for IRC Time Correction silverware, so it is a nervous wait for Tom Kneen and his crew.

“My ambition when I enter any race is to win my class,” said a clearly impressed Kneen, as he stepped ashore. “There are some really competitive boats in that class, Juno for example, and Rossko Racer another JPK 1180, who are very, very good. So, mission accomplished from my perspective.” The result is even more remarkable since Kneen had not planned to enter until Edward Bell (the owner of another JPK 1180, Dawn Treader) had agreed to share the burden of entering a race of this calibre. “Four of the people on board are Dawn Treader crew,” explained Kneen. “We sailed together for the first time on Friday afternoon for an hour. It is testament to how people pull together and how much effort we put in.”

Arguably all nine Sunrise crew were key individuals, but one stands out. Dave Swete has twice raced around the world winning the Hans Horrevoets Award for young sailor of the race on his first lap and was a Rolex Middle Sea Race winner with Lucky in 2010. Kneen was quick to pick out the critical part Swete played in ensuring the team stayed focused and motivated: “He absolutely worked his butt off, kept the crew together, kept the boat going fast and without him we would have been nowhere.”

Tom Cheney, the navigator, summarised the race: “From a navigational point of view, I think it was just chaos really.” Everything went as planned for the first part. A quick exit at Messina, on the last of the positive current, set Sunrise up for the leg to Stromboli where they stayed well clear to avoid any wind traps. The wild ride west started with apparent abandon before prudence and conservatism took hold just as the confusion took a grip. “South of Ustica, and completely unexpected to me, we had a complete 180 in the wind direction during the night,” said Cheney. “Then it was light and fickle around the Egadi Islands, and I had very little faith in our weather forecast. Even the last fetch from Lampedusa to Malta, we were left praying for a lift.” Whatever the final result, the young navigator leaves with some key takeaways. “It’s made me want to learn more about meteorology!” he quipped, before adding “I found it very stressful, and I did not sleep very much. I think it was fun, and I think it was worth it.”

On Wednesday we should know if the sun is shining on Sunrise.