Rossborough Round the Island Race 2019

Excellent conditions prevailed for the annual Rossborough Round the Island Race organised by the Royal Channel Islands Yacht Club, held earlier this month.

Despite a lack of sunshine, the mostly moderate westerly breeze coupled with a variety of favourable and counter tides produced an agreeably fast rounding for all of the twenty-one participants.

This very long-standing and popular event in Jersey’s racing calendar was generously sponsored by Rossborough Insurance for the fourth year running.

Starting at eight in the morning on Sunday 4th August, two hours ahead of high water, the fourteen-strong cruiser fleet was off to a clean start from St Aubin’s Bay, heading for the Diamond Rock buoy and, with spinnakers aloft, onwards on the flood to the Violet Channel buoy to begin the anticlockwise rounding of the Island.

In Class 1, Jérôme Desvaux’s Reflex 38, Captain Corsaire, was first to the Diamond quickly followed by Allen Brown & partners’ Melges 24, The Dog’s……..!, with Marc Noel’s Figaro II, Champagne, in hot pursuit. The leaders, having had a fast reach up the east coast and a tacking duel on the beat along the north, held these positions all the way to Grève de Lecq where Champagne overtook The Dog’s with Philip Burton’s Arcona 410, Arctic Tern, steadily closing the gap. Whilst the bigger boats sailed wide into adverse tide at Grosnez, The Dog’s gained by staying closer inshore. With Captain Corsaire still ahead, all chose to take the inner passage at Corbière, bearing away into the strong west-going tide and the final spi run to the finish in St Aubin’s Bay. Tactics were all!

With the wind having eased, boats were on a dead run and having to choose between staying out in the tide or going rock-hopping close inshore. Captain Corsaire opted to stay out, allowing her lead to slip but not to such an extent as to deprive her of a well-earned line honours, after five and a half hours, overall victory and the coveted Jesse Boot trophy. Champagne was a close second with Arctic Tern clinching third. The Dog’s, racing in the combined sportsboat and cruiser class, was the fastest boat on corrected time. 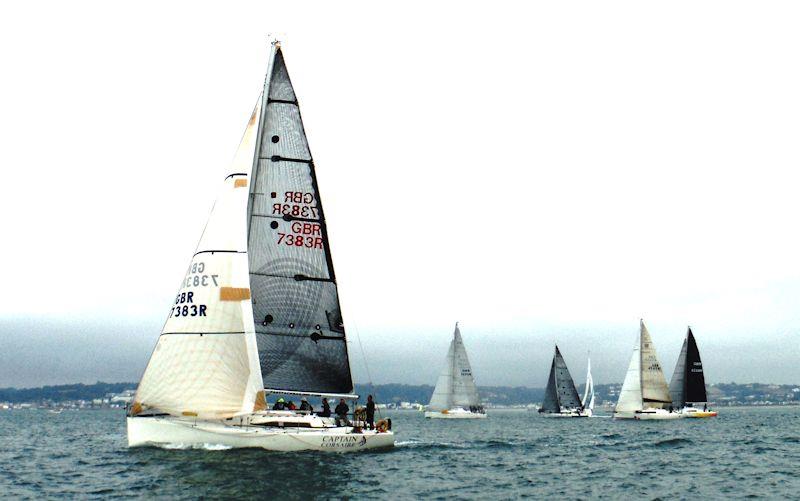 Jacques Minet’s Symphonie 29, Gwez Gwern, a regular competitor on the Jersey scene, piled on the pressure in Class 2, establishing an early lead that she held to take line honours in a little under six and a half hours. Ever close behind were Julian Barber’s Farr 727, Super Q, and Peter Crabb’s X-95, Paper Tiger with Tom Vallois’ Farr 727, MicMac, and Rodney Challinor’s Buchanan 41, Kalina, a constant threat. Most chose the inner passage at Corbière allowing the front runners to catch a number of Class 1 boats that had opted to stay out in the tide. It was Super Q, however, that clinched the race on corrected time, finishing thirteen minutes after Gwez Gwern, to win the Cabot Memorial trophy. With Farrs to the fore, salt was rubbed into the French boat’s wound by MicMac finishing second on corrected time, having gained hugely by hugging the coast on the final leg.

A seven-strong sport catamaran fleet came to the start line shortly after the cruisers were away. The three Wildcats, led by Andy Hart and Michael Kinross on Hobie 517 were well bunched at the Diamond and were quickly through the cruiser fleet as they sailed on to the Violet Channel buoy. Hart & Kinross maintained their lead just ahead of Adrian Jesson and Paul Martin’s Hobie 618 whilst Darren Stower and Graeme Monks’ Hobie 403 were a few minutes adrift at the mark. Hart & Kinross remained in the lead throughout the race to finish in just over four and a half hours. Jesson & Martin stayed well engaged with Stower and Monks battling it out whilst swapping positions as the race progressed. Finally, 618 passed 403 as they rounded Corbiere to hold second place.

The place prize-giving was held in the RCIYC that evening when Clive De la Cour, who competed in Class 3, Chairman of Rossborough Insurance, made the presentations and, to loud applause, announced that Rossborough will remain in the sponsor’s chair in 2020. Rear Commodore Kevin Newman thanked him and Rossborough Insurance on behalf of both the Club and competitors for their valuable ongoing support. 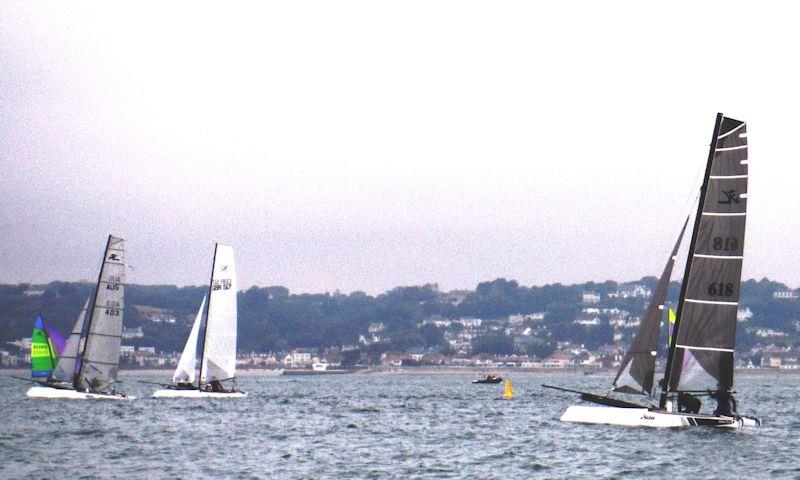