A number of newcomers joined the multitude of repeat offenders for the opening day of Townsville Yacht Club’s (TYC) SeaLink Magnetic Island Race Week (SMIRW), and although competitors waited for over an hour for the breeze to fill in, when it did, competitors agreed it was a superb afternoon of racing.

PRO Denis Thompson kept competitors updated and sure enough, shortly after midday, news came through that the breeze had filled in at 5 knots and racing was under way, the course shortened to reflect the late start.

New South Welshman Peter Lowndes is a regular here with his Wine Dark Sea. This year is different though. Lowndes’ partner in life and in the boat, Sarah Goddard-Jones, tragically passed away in June this year following a diving accident on the northern NSW coast. She would normally be at Magnetic Island with him, enjoying he five minute wind he and a mostly regular crew notched up in Division 2 today.

“The crew entry for this regatta was a six pack of French champagne in Sarah’s name,” Lowndes said this afternoon, apologising for his emotions which are always close to the surface. It seems perfectly fitting, as Goddard- Jones had a bubbly personality and the two loved sailing and cruising together.

“We have a new sabre to open the Moet,” he said, pointing to the shining silver sabre as a crew member demonstrated its use.

“We won the race by five minutes when the handicap was applied. It’s all in tribute to Sarah – and I have donated a trophy in her name too – it will reflect sportsmanship and good seamanship,” Lowndes ended after beating offshore racing veteran, ‘Sir’ Robbo Robertson to the punch for the win. 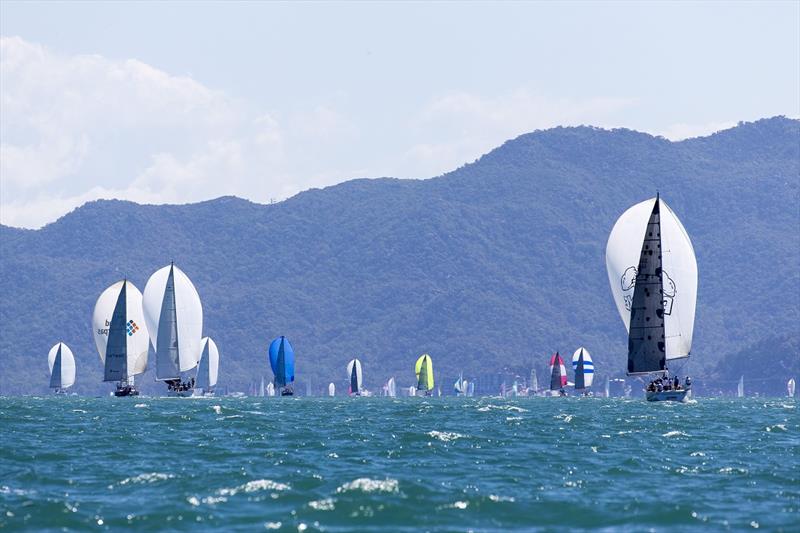 Robertson turns 80 in December, but as the old saying goes, you can’t keep an old sea dog down and so the Queenslander is here to try and add a third Maggie Island title trophy to his cabinet. He was wearing an ear to ear grin this afternoon having sailed his ‘It’s Time’ to second place.

Aboard Blue Water Tracks, their beautiful Moody 54DS, husband and wife team, Grant and Delma Dunoon from Victoria were pleased to get away from their cold local weather to take part in their first Magnetic Island Race Week.

“We first took the opportunity to be at the BBQ at Cape Upstart,” Delma said. “We thought, ‘oh well, another barby’, but it was anything but. It was so special and they went to so much trouble – even down to the fairy lights on the tables.

“The food was fantastic – the Barra (Barramundi) on the beach was the highlight for me. It was an unforgettable experience.”

Grant added: “We loved meeting people and introducing others, the quiet music and the bonfires.” 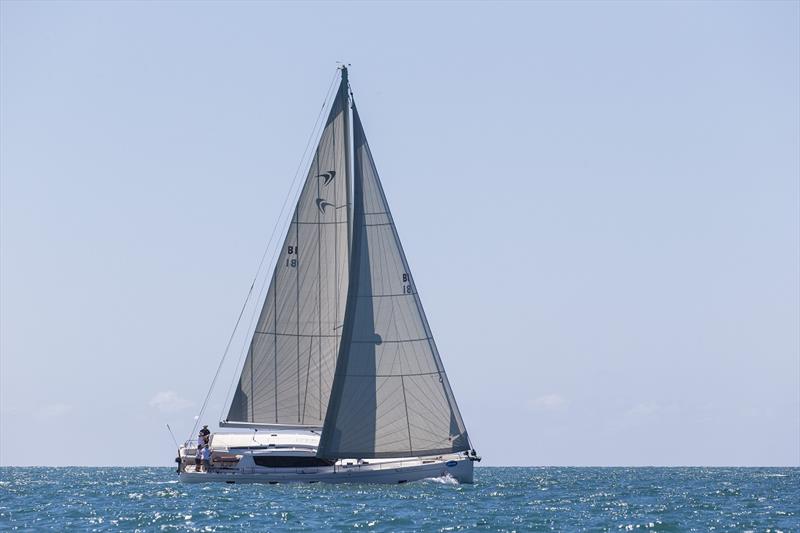 The pair is racing in the Non-Spinnaker division; a white chesterfield couch taking pride of place at the back end of their boat. “It’s our interview couch,” explained Grant, who with experienced sailor, Sue Bumstead, took on the 5500 nautical mile Melbourne Osaka Yacht Race last year and will add another Sydney Hobart to his credit this year.

On being at Maggie Island and partaking of all it has to offer, Grant commented: “We arrived at the Island after Cape Upstart, spent the day at Horseshoe Bay. We had a short race today, but it was a good race. We didn’t win, as it was too light for us, but we came here to relax, not so much to win.” They finished sixth from eight in the division that was won by Lance Denby’s Ostara.

The pair is staying on board Blue Water Tracks, calling it, “our five star accommodation.” And it really is. 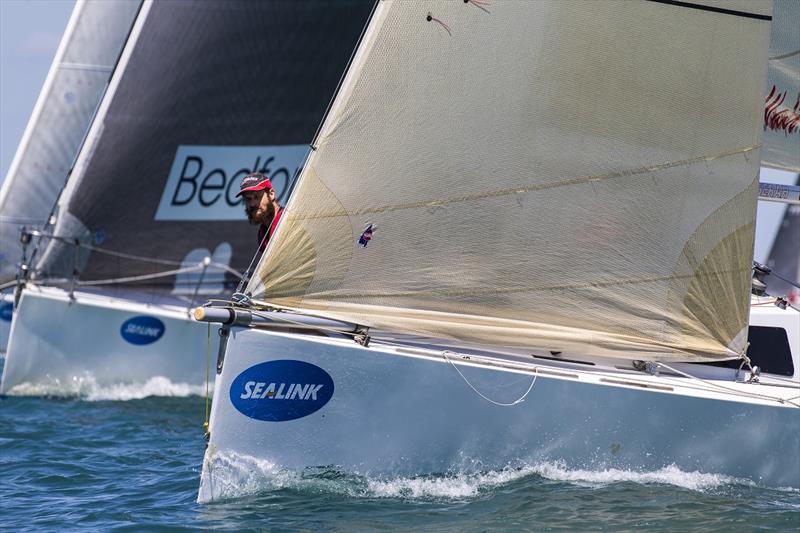 The last word goes to Mal Pirret, Event Chairman from TYC and owner/skipper of the well-named ‘Champagne’, which is racing in Division 3, won today by Ian White’s Kite from Lake Macquarie in NSW.

Pirret, who finished sixth from 18 entries, said of the day: “We expected the breeze to come in and build. It got up to 13 knots going to the top mark after being a bit light on at the start.

“We got gassed at the start and then kept away from the rest of the fleet. We had a good run though. Merlion (Eddie Mackevicius, Vic) went around the mark in front of us, with Popeye (Craig Douglas, NSW) just behind. It was a close finish between the three of us and a beautiful day on the water,” he said after the fleet set spinnakers for the run home.

Racing continues at SeaLink Magnetic Island Race Week tomorrow and is due to get under way from 11am. The event finishes on 4 September with boats racing across IRC Racing, Spinnaker, Non-Spinnaker, Multihull and Trailable Yacht classes.

For all information visit www.magneticislandraceweek.com.au