The Round North Island Race (RNI), proudly sponsored by Evolution Sails, is New Zealand’s most iconic yachting challenge and the 2020 edition will feature the biggest ever fleet with the maximum 40 entrants now confirmed, if all the boats make it to the start line.

This is 13th edition of the race, 43 years after the inaugural event was first planned by Sir Peter Blake and Martin Foster! The idea was based on Sir Peter’s experience in the Round Britain Race, and Martin’s experience of sailing around New Zealand in his yacht Truant.

The race starts in Auckland with the first leg to Mangonui in the far north (154NM), Leg 2 is from Mangonui to Wellington (550NM), Leg 3 from Wellington to Napier(200NM), and the final leg from Napier returning to Auckland (367NM). The race is expected to take approximately 2 weeks in total to complete.

With just over 200 days to the start the fleet of 40 boats has now been confirmed, with a diverse fleet. The largest yacht is Awen, an Imoca 60 sailed by Evan Davies and Sharon Ferris-Choat, while the smallest yacht is Moving Violation, an Elliot 7.9 sailed by Ben Beasley and Nick Gardiner. Thirty-four feet separate the smallest to largest boat, so the diversity of this fleet will bring with it not only great line honours racing for the larger yachts but an epic handicap battle across the fleet. With 18 yachts between 35 and 37 feet we can expect some very tight racing across this pack and each leg will go down to the wire on handicap.

Titanium, sailed by Shane Bellingham and Casey Bellingham, and Motorboat II sailed by Josh “Booboo” Tucker and Damon Jolliffe fresh off their successful first and second places in the Round New Zealand (RNZ) Race in March 2019 along with the entire fleet from RNZ will all be on the start line and are expected to be pushing hard to be at the front of the pack. 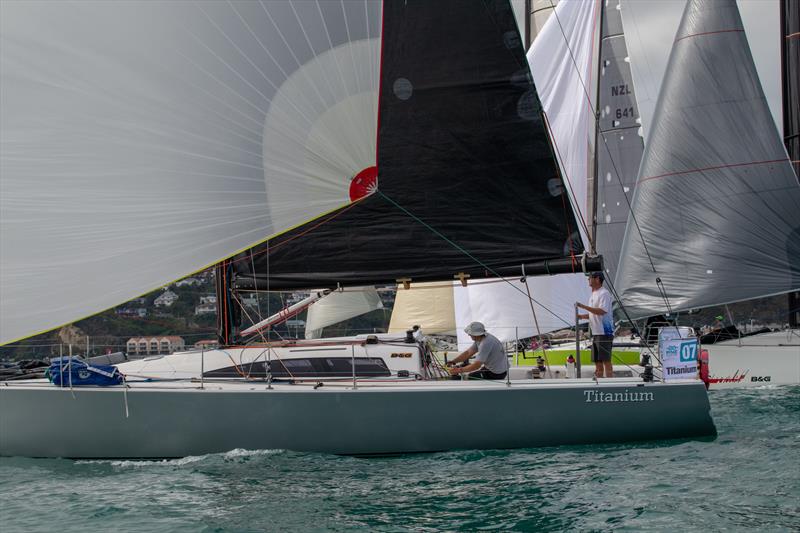 Titanium pictured at the start of the RNZ2019. She is also entered in the 2020 Evolution Sails RNI. – photo © Deborah Williams

“We have been blown away with the support from both Evolution Sails and the New Zealand Sailing Foundation for their event sponsorship and the local yacht clubs and Councils for each of the stopovers. The hospitality at Mangonui is legendary, Wellington will be amazing with the large yachts berthed at Queens Wharf, and the smaller boats at Chaffers Marina making for a great opportunity for the public to view the fleet. The team in Napier have done a great job and pulled off the challenge of fitting us in! The support from these partner organisations has ensured that we can put on this legendary race and have the biggest ever fleet on the start line.” – Jon Henry, Race Director

“We are thrilled to be part of this exceptional race, the history, talented sailors, and challenge that this race is, make it one of a few truly iconic New Zealand races and Evolution Sails are excited to be part of this event. With three members of the Evolution Sails Auckland team also racing in the event we truly understand the needs of the shorthanded sailor and welcome the opportunity to help these sailors get the most out of their yachts and sails. We can’t wait to be with the fleet on the start line in a few months’ time and are here to help with any sail needs they have!” – Rodney Keenan, Evolution Sails 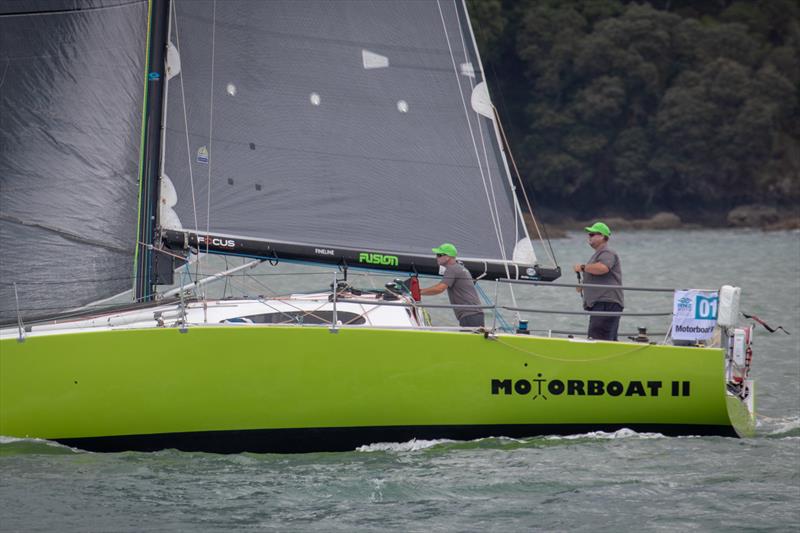 Motorboat pictured at the start of the RNZ2019. She is also entered in the 2020 Evolution Sails RNI. – photo © Deborah Williams

Making it to the start line of this epic race is a challenge in itself. Each yacht must have a Category 2 Safety Certificate issued by Yachting New Zealand, have completed a 250 Nautical Mile qualifying passage with both Co-Skippers on board. The Co-Skippers must both also complete Advanced First Aid training, Advanced Sea Survival qualifications, and provide a medical certificate deeming them fit to compete. Each yacht must meet an extensive list of safety requirements and have completed safety drills, all of which are in addition to preparing the boat to ensure it is ready for this epic race and getting as many miles under the keel as possible two handed before the race. Many of the fleet used the SSANZ Anzac Enduro Race as their qualifying race and will also use the SSANZ Lewmar Triple Series, PIC Coastal Classic and other races to build up two handed time on their path to the start. 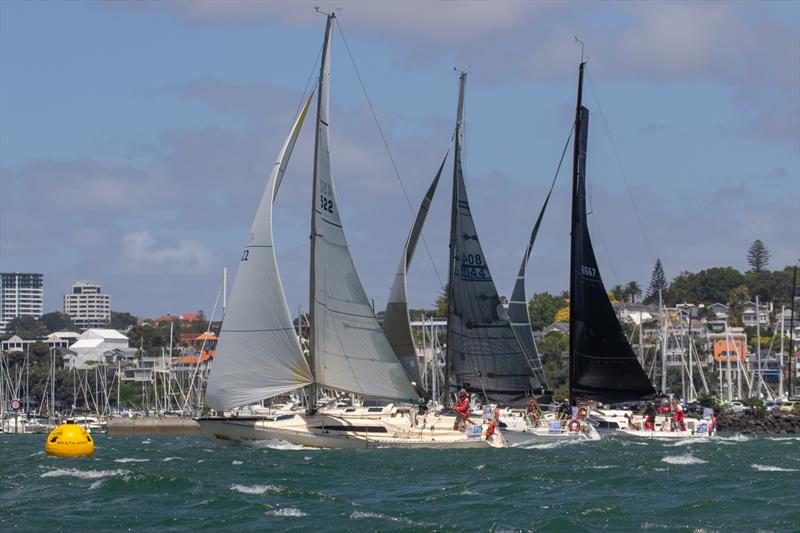 SSANZ Two Man Round NZ 2019 gets underway in Auckland. The three boats are pictured at the start of the RNZ2019 are also entered in the 2020 Evolution Sails RNI. © Deborah Williams

The first race was started on Tuesday 22 February 1977 by HRH Prince Philip off Devonport Wharf as part of the Queen’s Silver Jubilee tour. The race attracted forty-five entries and thirty-nine starters, we hope to beat this and have 40 boats on the start line for the 2020 edition. In 1977, first to finish was Sir Peter Blake and Graham Eder on the yacht Gerontius. The overall winner on handicap was the 25-foot sloop Marimba sailed by Eric Wing and David Anderson.

As HRH Prince Philip warned in his foreword in the programme for the 1977 Two Handed Round North Island Race: “This race is a serious challenge even to experienced yachtsmen, and completing the course without mishap will be an achievement in itself.”

This sentiment remains true for all those entering the 2020 edition of the race.