On 7 November, just three months after her launch in Concarneau, Brittany, the Trimaran SVR Lazartigue, a genuine flying boat, will take the start of the Transat Jacques Vabre, her first offshore race.

François Gabart will make his big comeback to the competitive arena aboard her in the Ultim category. Alongside him will be Tom Laperche, his young sailing prodigy. 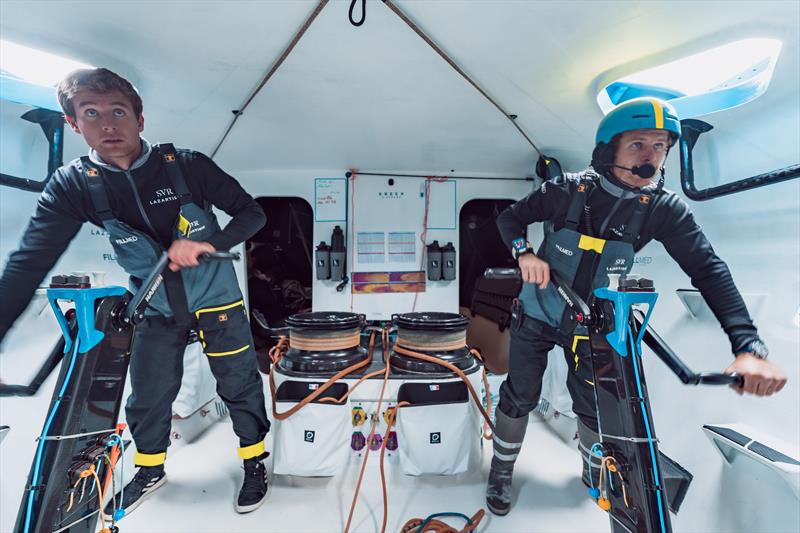 Take-off is scheduled for Sunday 7 November offshore of Le Havre in north-east France. Destination Fort-de-France, in Martinique. For the boats in the Ultim category, that of the giants of the seas, the journey involves 7,500 miles of racetrack, two passages of the equator and two transits across the Doldrums. The front runners are expected to make the finish after 16 or 17 days at sea.

Among the five Ultims lining up for the start of this 15th edition of the Transat Jacques Vabre, the Trimaran SVR Lazartigue is bound to attract attention. Fresh out of the workshops at MerConcept, where she was designed and assembled in her entirety, the large capri blue boat will make her race debut with her unique and sleek design to better cut through the air, her 36 m mast stepped onto a hull measuring 32 m long and 23 m wide, and her cockpit where go-kart steering wheels replace the traditional helm. 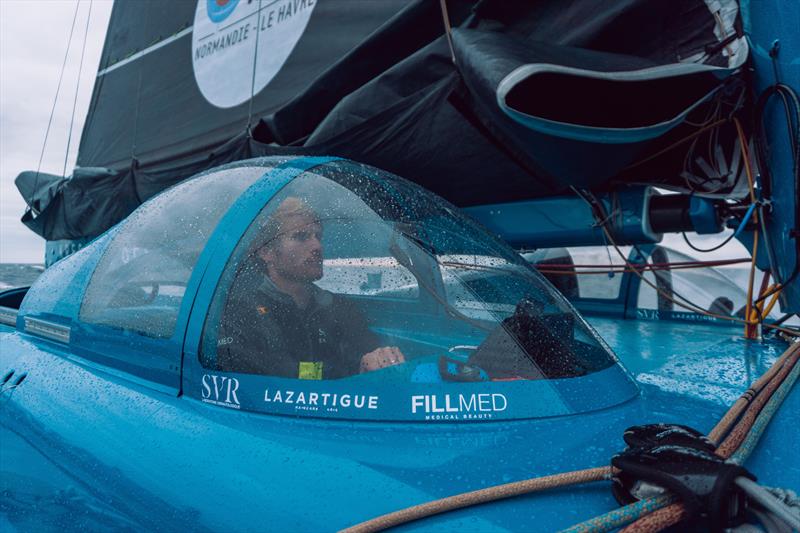 Launched back in July and christened in September by her patron Mélanie Laurent, the team was certainly up against it if they were to stand a chance of making the start of the Transat Jacques Vabre. Their presence is their first victory. “The initial aim is to finish the race, explains Gabart, winner of the Vendée Globe 2012 and singlehanded round the world record holder since 2017 (42d). We clearly won’t be the favourites, as other teams have much more experience on their own boats. We’re going to continue discovering ours over the course of the race. We’re probably the crew which will be on the steepest learning curve during the race. It’s down to us to ensure that the learning process is very quick so we can go for the win.” 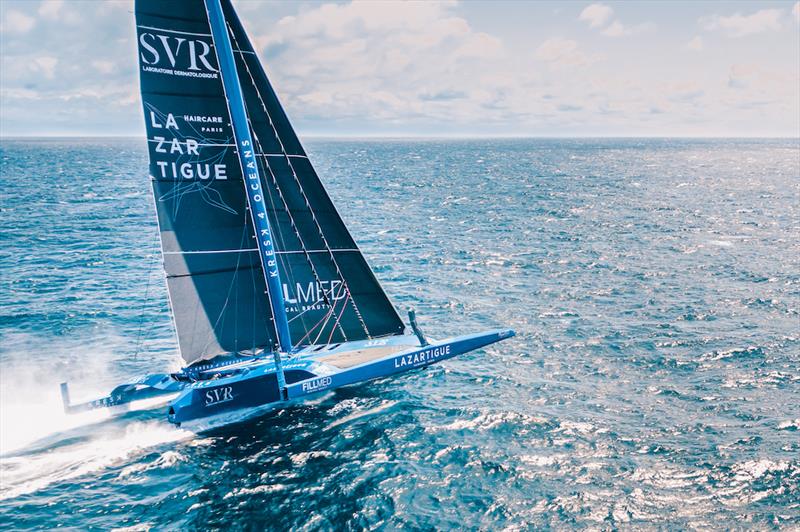 At 13 years of age, Tom Laperche made his first transatlantic passage bringing his father Philippe’s yacht back to Europe after the Route du Rhum. Less than 10 years later, at just 24, the sailor from the Morbihan in south-west Brittany has been selected to co-skipper the Trimaran SVR Lazartigue for the Transat Jacques Vabre, alongside François Gabart. “Sailing with François, on a new trimaran, is inevitably something you dream about, admits the youngster, armed with an engineering degree from the University of Technology of Compiègne. I feel both proud and grateful to have been chosen. Knowing that I’m trusted to take on this offshore race is really something. My eyes are sparkling. It’s a privilege to sail on this new generation of flying boats. For this Transat Jacques Vabre there are a lot of unknowns, a lot of adjustments, a lot of thought and that stirs up a lot of excitement. It’s bound to be a real journey of discovery, but I’m confident. As someone with a Class Figaro background (two podiums in the Solitaire du Figaro in 2020 and 2021), moving up to a boat like the Trimaran SVR Lazartigue, is like making the switch from go-karting to F1.” 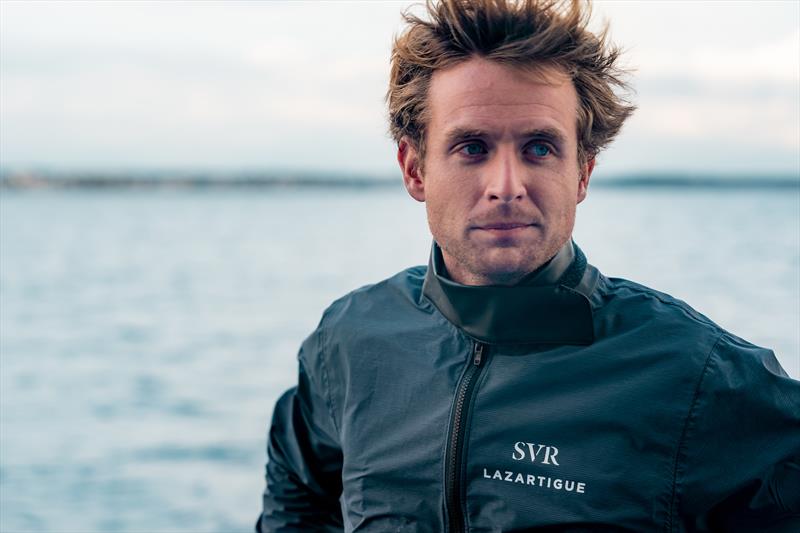 A boat designed to fly

Designed and assembled by MerConcept, who contracted the whole project, the Trimaran SVR Lazartigue belongs to a new generation of flying boats where aerodynamics is of equal importance to hydrodynamics. The development of new technologies in all the design domains, makes the Trimaran SVR Lazartigue a unique and revolutionary boat. “Our aim was to design a fast and reliable boat geared towards solo and crewed sailing in all kinds of situations, whether it be major offshore racing classics, a record campaign or a round the world race, explains the skipper of the trimaran and founder of MerConcept. Within the team, the philosophy was to create a boat where performance, safety and aesthetics are paramount.” 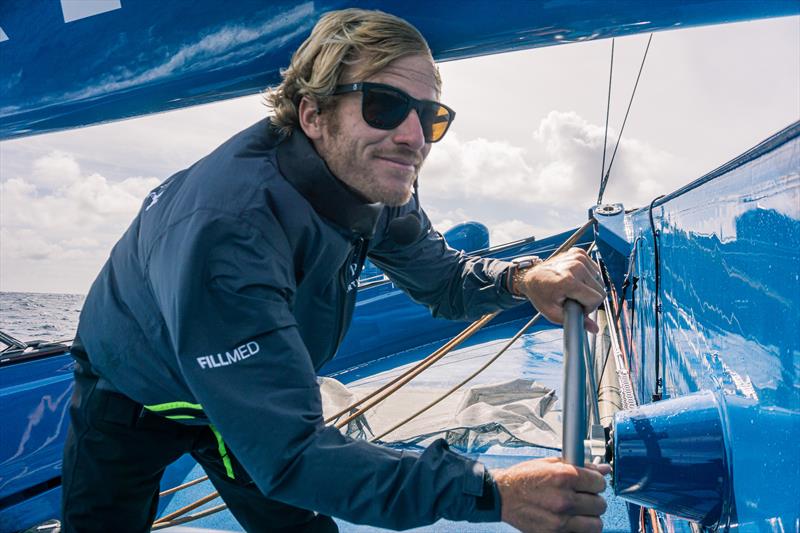 Initial sea trials aboard the Trimaran reassured the team in its choices. “The boat has massive potential, revels Gabart. Over certain sections, we reached some quite extraordinary speeds, peaking at 48 knots (nearly 100km/h). We now need to continue working to gain a better understanding of her. We have a lot of innovative systems so we need to make her reliable. We’re learning every day. The goal is to be able to post average speeds of around 40 knots for hours, days and even, and I dream about it, weeks. This boat is designed exclusively for offshore flight. We’re experiencing an extraordinary revolution.” 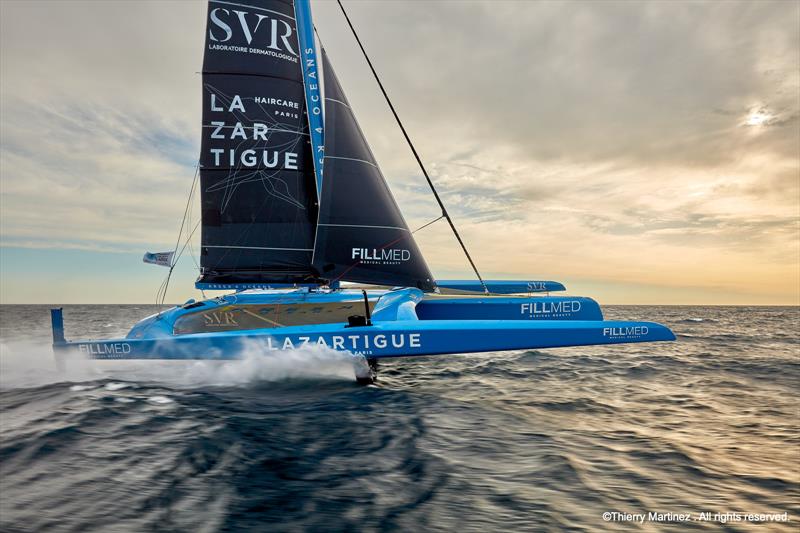 François Gabart heads back out to sea alongside Tom Laperche aboard the Trimaran SVR Lazartigue for the Transat Jacques Vabre © Thierry Martinez / www.thmartinez.com

Kresk commits to the oceans

In May 2021, the French cosmetics group committed alongside François Gabart, skipper of its new trimaran SVR LAZARTIGUE and the new ambassador for its SVR, Lazartigue and Fillmed beauty brands. “The Kresk group is proud and happy to be setting off on this maritime adventure with François Gabart and this boat, which is a technological challenge equal to our shared ambition, explains Didier Tabary, President of the Kresk Group. This marriage seemed to us to be a no-brainer, a marriage of passion and values associated with innovation and commitment. For our part, this union is also the next step in our development strategy for clean beauty and it’s a fantastic opportunity to take this approach even further.” With this in mind, the Kresk group, a pioneer that is already highly committed to making the transition towards more responsible cosmetics, is keen to further develop its action through the creation of the KRESK 4 OCEANS endowment fund.