Powered by the best breeze of the week – 10-15 knots at the start off Point Fermin – today’s final 19 entries in four divisions vaulted off the start line towards Honolulu, 2225-miles away, in the 2021 Transpac.

These are the fastest boats in the fleet entered in Divisions 1, 2, 3 and 4, and vary from 52 to 77 feet in length, with all expecting a speedy passage ahead. 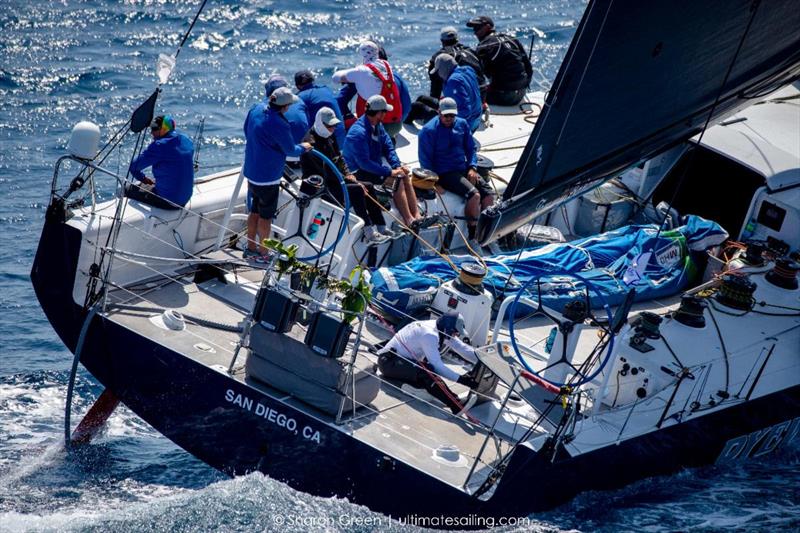 The current monohull course record set by the VPLP 100 Comanche in 2017 is 5D-1H-55M-26S, an average speed of over 18 knots. “A few days ago we got excited when the weather models lined us up for what looked like could be a record run,” said Peter Isler, navigator on Roy Disney’s turbo Volvo 70 Pyewacket (inset photo – Sharon Green/Ultimate Sailing) “This is less certain now, but it still looks like a fast race ahead if we can get off the coast tonight.”

So far this is looking good: the latest report on the YB trackers has Pyewacket heading west at close to 0 knots VMG with more speed expected as they reach the stronger coastal breezes offshore late tonight or early Sunday morning. 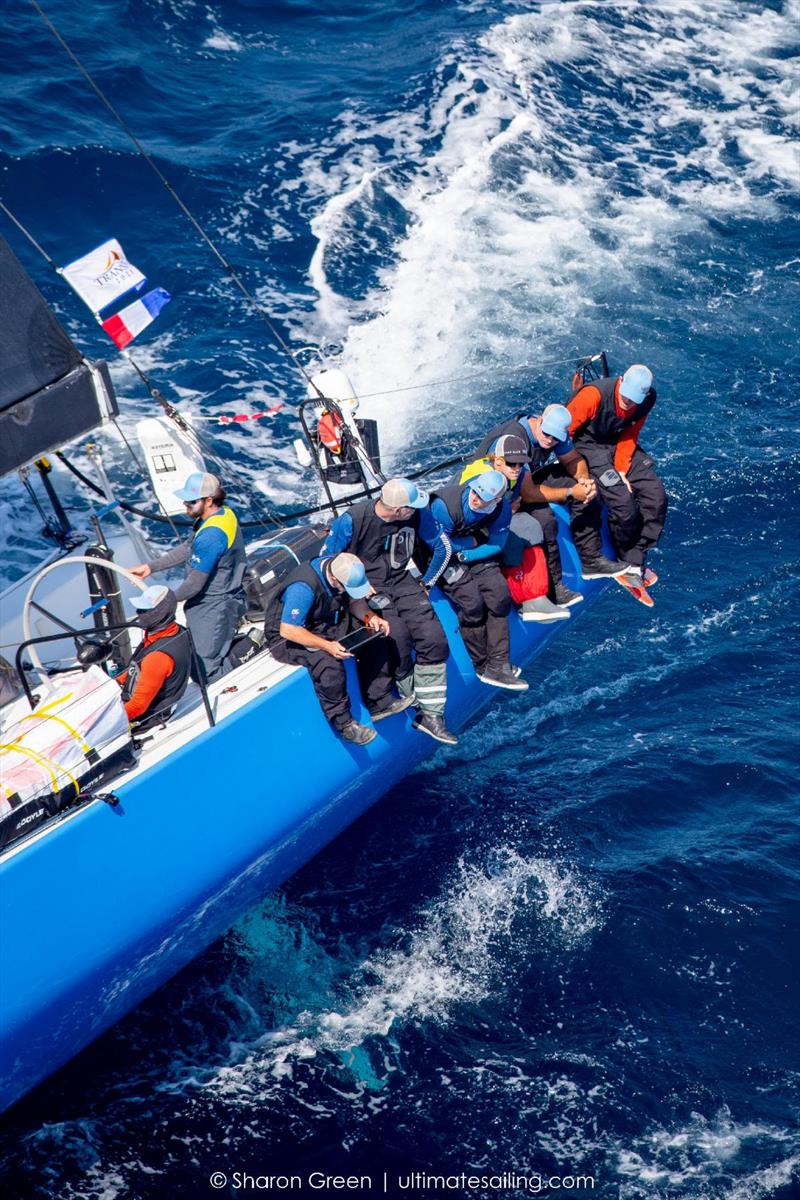 Regardless of record pace potential, everyone in today’s fleet was upbeat about the race after months and sometimes years of planning and preparation. Chris Sheehan’s Pac52 Warrior Won (inset photo left – Sharon Green/Ultimate Sailing) is from Larchmont, NY and has been planning for this race ever since acquiring his boat from the West Coast in 2019.

“The Transpac is the must-do race for ocean racers,” he said. “I’ve done many 600-milers – Fastnet, Middle Sea Race, Bermuda and Sydney Hobart in my prior boat – but yet to do a truly long distance ocean race. It’s a beast of a race in terms of distance but enjoyable in terms of conditions.”

Warrior Won is one of several Pac52 and TP52 entries, a high-speed, offshore-capable design concept developed by the Transpacific YC for this race some 20 years ago. 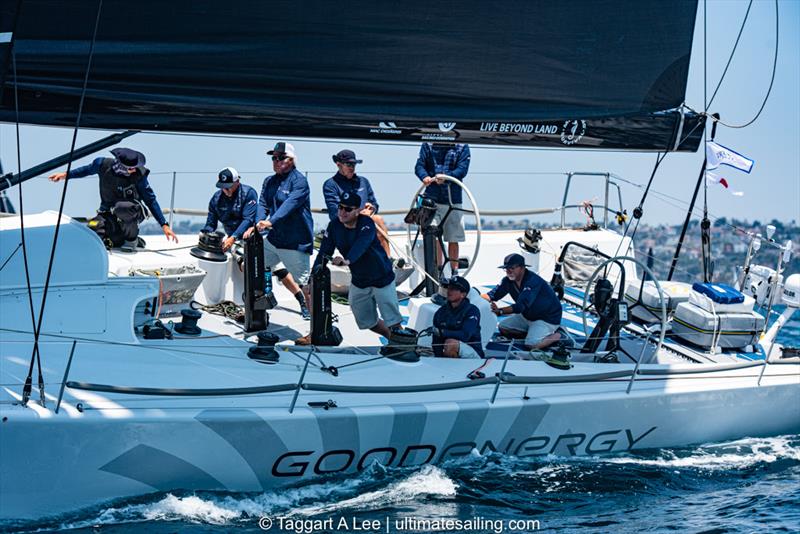 In contrast, George Hershman and Mark Comings’s Reichel/Pugh 63 GoodEnergy (inset photo right – Taggart Lee/Ultimate Sailing) is local-based in Cabrillo Beach, and pulled together their boat and team quite quickly, just in the past few months. Helmsman Chuck Clay explained “This boat was Loki, the Australian 2011 Sydney-Hobart champion, that became available and was bought on the East Coast, trucked out here and assembled quickly enough for us to qualify. We had a lot of work to do, like switching the winches from hydraulic to electric-powered, but its come together well. Our team is a lot of friends who have tremendous experience in this and other ocean races, so we look forward to doing well and having fun.” 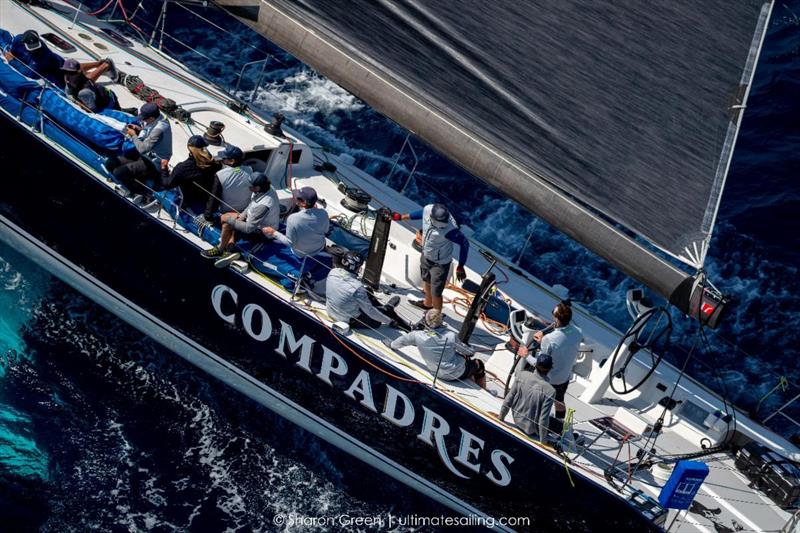 On a similar theme of racing with friends but also family as well, David Dahl, CEO of Transpac Heritage Sponsor Whittier Trust, is racing with his two sons Michael and Sean in a partnership arrangement with other owners of the aptly-named Andrews 77 Compadres (inset photo left – Sharon Green/Ultimate Sailing) based in Newport Beach. Saying that they’re doing the race because of “too many conversations in the Newport Harbor Yacht Club Pirates Den,” their goal is to have a race that will be safe, fast and fun. The team of 14 has been training for this race by competing in several distance races in Southern California and Mexico.

“Racing on the Pacific Ocean is a test of the human spirit,” said Dahl. “You never know what to expect – uncertainty reigns. You must be prepared to handle anything, with experts supporting you.” An appropriate analogy he makes to their client relationships at Whittier.

Out on the race course about 200 miles west, yesterday’s starters in Divisions 5, 6 and 7 are in a relatively tight group about 40 miles from front to back, charging towards Hawaii relatively close to rhumb line (right inset YB tracker image). Bob Pethick’s Rogers 46 Bretwalda is leading this pack, high-speed reaching at 10-11 knots in 20 knots of wind. This group will be closing the gap and likely overtaking the tail enders in the first wave of starters in Division 8 in a few days at the current rates of speed.

The boat closest to Hawaii now is Cecil and Alyson Rossi’s Farr 57 Ho’Okolohe, who is approaching the halfway point in about another day’s time at their current rate of about 10 knots in boatspeed. For them the wind is already starting to shift aft from beam reaching to broad reaching, and they are reporting weather this morning as “90% cloudy, 6-8 ft seas, 035 degrees TWD, 15-22 knots TWS, 1020mb pressure. Rough, shifty night with one good squall this morning, Amazing full rainbow on the bow after and it looked like an arch that we were aiming for. We thought of Gordo (former shipmate) calling us through the gap.”

Soon enough there will be more rainbow-chasers in this year’s fleet, a group of 41 entries that has already navigated so many challenges to be on this race course this year and are being rewarded with outstanding conditions – “Classic Transpac” is what Peter Isler called this weather in his description of the forecast.

YB trackers are on board all entries, with positions indicated on the YB website at this link: yb.tl/transpac2021. The positions have been delayed by 4 hours, except when within 200 miles of the finish, where they revert to real-time tracking.