There was no dock-out surrounded by thousands of fans and only a small spectator fleet as the IMOCA class got down to business for the first time this year with its unique “warm-up” race for the 2020 Vendée Globe solo round-the-world race in November.

All the skippers had come into the start area off Les Sables D’Olonne from their respective ports and then answered the gun at 15.30 local time with a fresh, 15-17-knot southwesterly breeze blowing in off a grey Biscay with occasional breaking waves. 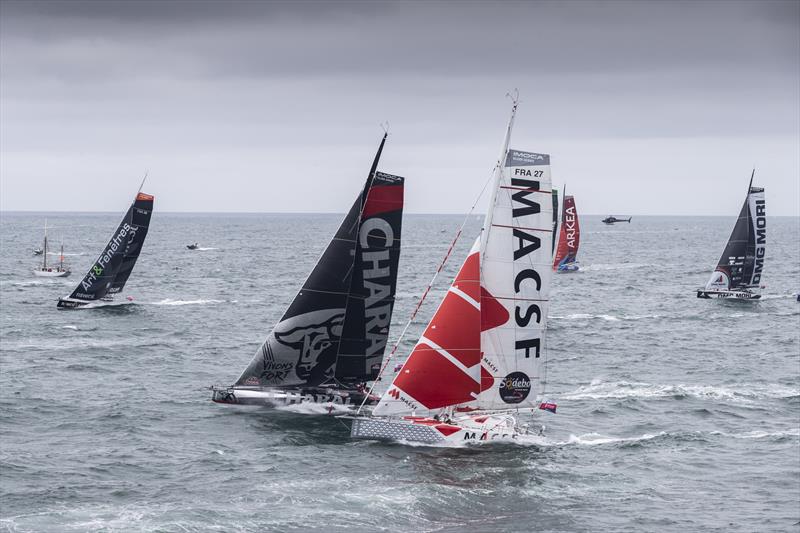 Under leaden skies, this gave the skippers a close reach on starboard tack to the Pasteur Institute turning mark, eight nautical miles south of the line. Leaving that to starboard, they then turned their bows north-northwest as they began their long voyage towards Iceland, somewhere this class has never been before.

Twenty-one boats had initially been entered for the race but Alain Roura on La Fabrique has remained ashore to be on hand when his wife gives birth. Another notable absentee is Britain’s Alex Thomson on HUGO BOSS who elected not to take part in this 3,600-mile course, which takes the fleet to the Azores after a turning mark off Iceland and then back to Les Sables d’Olonne.

The IMOCA fleet certainly lived up to its name for cutting edge design and speed as the monohulls headed away from the line, accompanied by media boats on the water and helicopters in the air above them, with boatspeeds in the late teens and up to 20 knots at times. 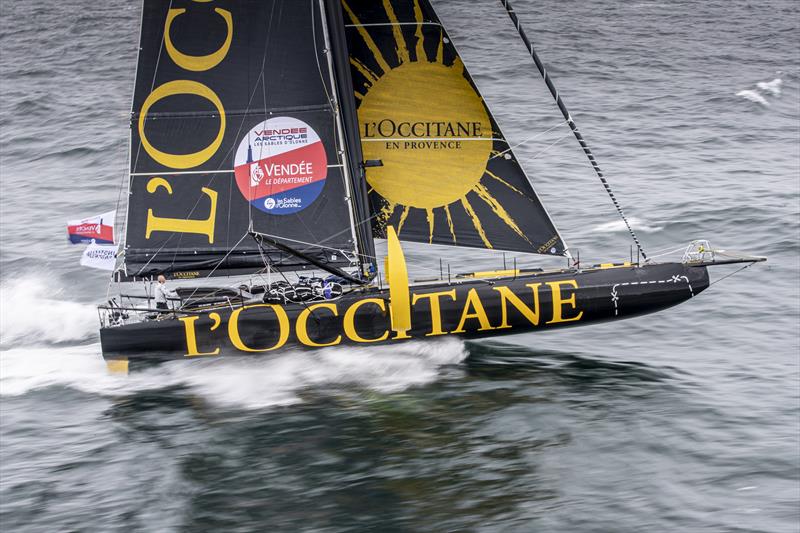 The big surprise early on was Armel Tripon at the helm of the brand new Sam Manuard-designed L’Occitane en Provence which was built last year by Black Pepper Yachts in Nantes and is using this race to formally qualify for the Vendée Globe. She looked fast and sleek at the head of the field, in her all-black livery and gold lettering, under one reef and a staysail.

Hot on her heels was one of the favourites for the Vendée Globe, Jérémie Beyou on Charal, flying a bigger headsail and one reef. Also in the leading group was Apivia skippered by Charlie Dalin and Kevin Escoffier on board PRB, two hugely talented skippers who will be taking on the Vendée Globe for the first time. 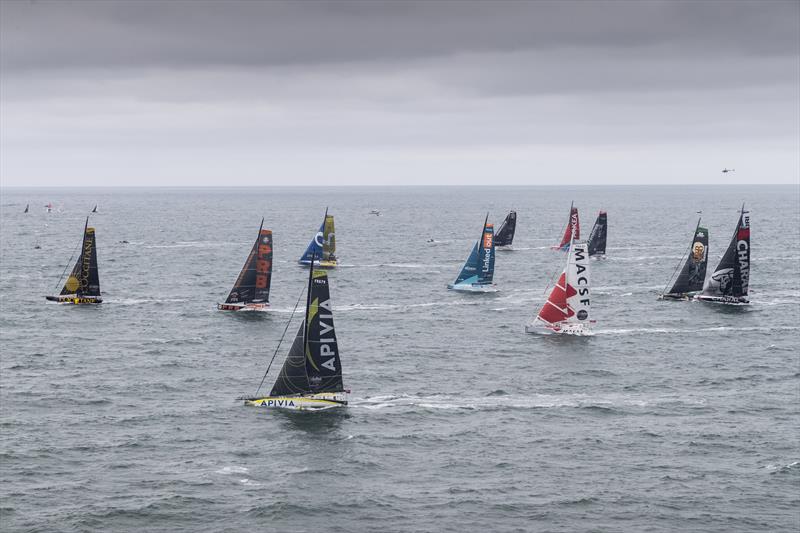 Elsewhere in the top half of the fleet were Sébastien Simon on ARKEA PAPREC, Boris Herrmann of Germany aboard Seaexplorer-Yacht Club de Monaco and Britain’s Sam Davies on Initiatives-Coeur.

The official ranking at the Pasteur Institute Buoy placed Tripon just ahead of Beyou with Thomas Ruyant on LinkedOut in third place, Dalin fourth and Escoffier fifth. 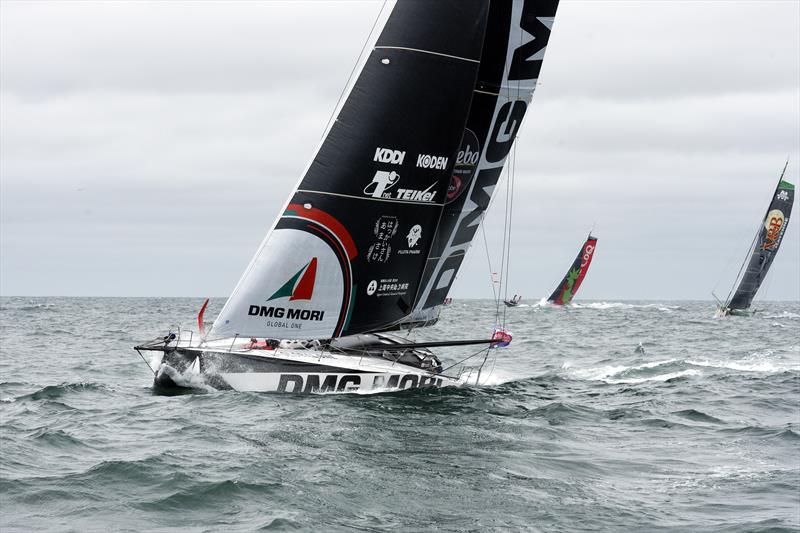 Five skippers are using this race to formally qualify for the Vendée Globe. In addition to Tripon, they include Isabelle Joschke on MACSF, Kojiro Shiraishi on DMG MORI Global One, Simon on ARKEA PAPREC and Clément Giraud on Vers Un Monde Sans Sida.

Ahead of the fleet lies an interesting and challenging voyage to the IOC UNESCO Waypoint that is located about 125 nautical miles southwest of the southwestern tip of Iceland. The boats will continue in this southwesterly airflow as they head past Brest and across the mouth of the English Channel with the wind increasing in strength. It is then forecast to drop off into the mid-teens from the north-northwest which will be hard on the wind.

This is a complex and busy stretch of water with plenty of commercial shipping and fishing boats for the skippers to keep an eye out for, meaning that there will be precious little sleep for any of them in the early stages of this race. 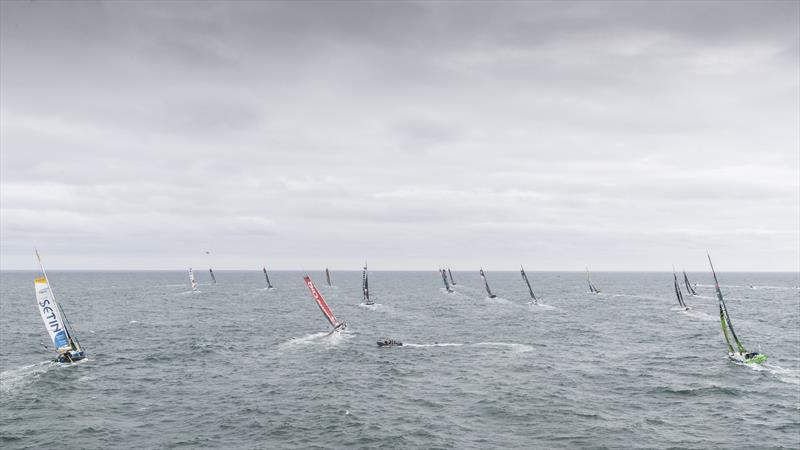 Two-and-a-half hours into the race Beyou’s Charal was leading, making 17 knots upwind, with Dalin’s Apivia second about half a mile behind, then Tripon (1.1), Simon (1.2) Ruyant (1.8), Escoffier (1.9), Herrmann (3.0) and Joschke (3.5). The backmarkers at that stage were Britain’s Miranda Merron on Campagne de France and Giraud.

Today at precisely 7.55pm, only a few into the race, Sébastien Simon warned his shore team that the starboard foil had just broken. ARKEA PAPREC was sailing at 17 knots in 20 knots of wind when the damage occurred. Sébastien was inside and the boat went down. The foil broke at the edge of the hull.

Sébastien is currently heading towards Port-La-Forêt, he should reach the port at midnight. The team is making every effort to make a precise diagnosis as quickly as possible. 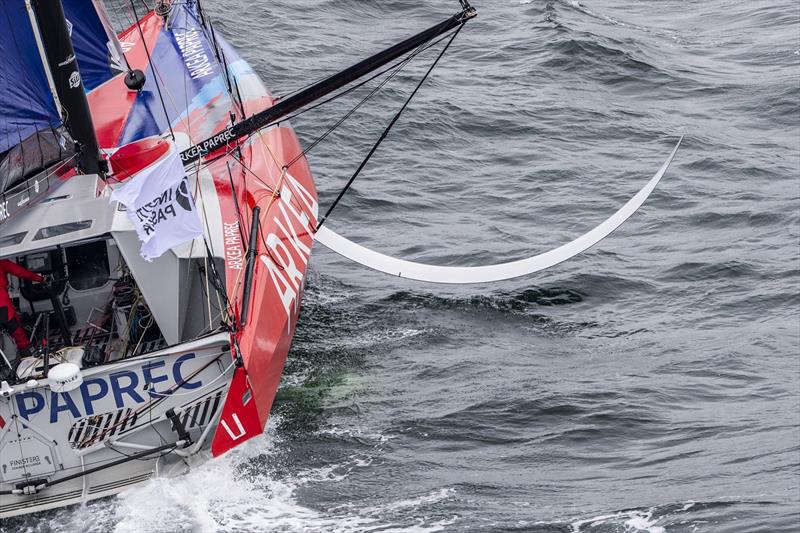