Jérémie Beyou knows a lot about how to finish a race in a winning position – a quick look at his glittering CV tells you that about a man who has won the Solitaire du Figaro three times.

He is also renowned for his ability to push a boat consistently at its optimum speed. All of which suggests that there is a good chance that, now that the Breton skipper from Finistère is back in front in the Vendée-Arctique-Les Sables d’Olonne Race, he will be able to stay there until the finish sometime in the early hours of tomorrow morning.

This morning Beyou, who overtook Charlie Dalin on Apivia by getting to windward of him after the Gallimard Waypoint, had just 234 nautical miles to go to the line and was hammering along at an average speed of 20 knots on a broad reach in a fresh northerly wind.

Beyou has led for much of this race but, even when he has been forced off the top spot, he has always been there or thereabouts and he was ready to pounce at the beginning of the final section of this extraordinary “warm-up” for November’s Vendée Globe solo round-the-world race.

The forecast suggests the breeze should hold up almost all the way to the line off Les Sables d’Olonne and there are not many options for those chasing him, although a park-up in the early hours is always possible.

But the 44-year-old Beyou – who was third in the last Vendée Globe – now has every chance of adding this race to a palmares that includes the Transat Jacques Vabre, the Fastnet Race and the Volvo Ocean Race.

Behind him – a distance of just seven miles – is Dalin who has Thomas Ruyant on LinkedOut breathing down his neck another mile further back and clearly visible. 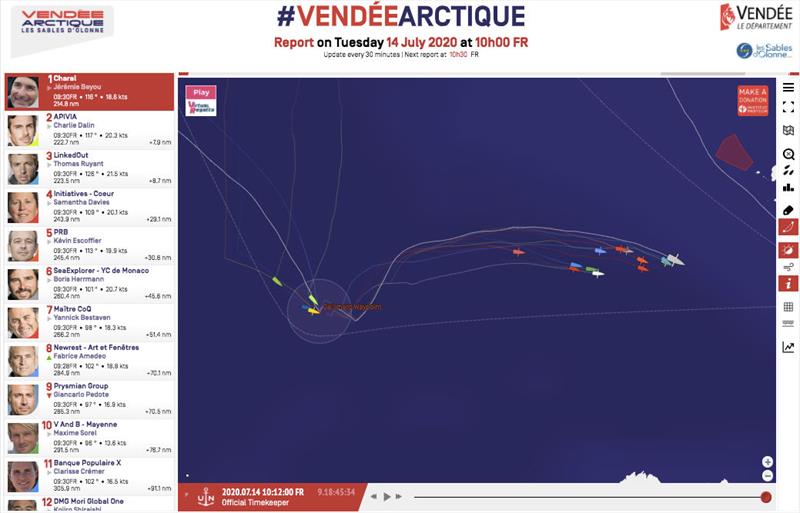 The data suggests that Ruyant has been moving slightly quicker than Dalin in this powered-up mode and the LinkedOut skipper will be working hard to overhaul his rival in the next few hours on what will continue to be a bumpy and violent ride to the French coast.

The next battle is 20 miles further back where the leading second-generation IMOCAs of Kévin Escoffier and Sam Davies are just over a mile apart in terms of distance to the finish, but are separated laterally by seven miles of ocean. This is another classic duel in boats that have proved they are going to be highly competitive in the Vendée Globe.

We have got used to the tight bunching of this fleet over the last 10 days and this morning is no different with the top-12 skippers spread out on an east-west axis of just over 200 miles.

Among the other skippers, Boris Herrmann on Seaexplorer-YC de Monaco is managing to hold onto sixth place (+47.3) while behind him, Maxime Sorel on Vand B Mayenne has managed to get ahead of Clarisse Crémer on Banque Populaire X for the first time in the race. Sorel was 14 miles ahead of his leading rival among the boats that are not fitted with foils.

There are only four boats left to round the Gallimard Waypoint with Arnaud Boissières on La Mie Câline-Artisans Artipôle expected to be the next to reach it. He will be followed by Clement Giraud on Vers Un Monde Sans Sida, Manuel Cousin on Groupe SÉTIN, and the backmarker, Britain’s Miranda Merron who was 365 miles behind the leader on board Campagne de France.