Vendée Globe Day 52 morning update: Compacting in the South Pacific Tunnel to Cape Horn. In the strong, following W’ly wind and with the leading duo electing to stay north slightly – around 50 deg- the top of the fleet have compacted slightly more.

Charlie Dalin (APIVIA) – who slowed yesterday to consolidate his foil box repairs yesterday – has caught back some 40 miles on Yannick Bestaven (Maître Coq) and Thomas Ruyant (LinkedOut) has returned more than 120 miles on Bestaven to be 202 nautical miles behind Bestaven. As Cape Horn beckons this weekend it is as well Race Direction has opened the race area more by moving the ice barrier south in this area as there will be significant race traffic!

Fortunately for this lead group they will be into a new NW’ly flow today from a system which will take them east to exit the Pacific. Overnight Bestaven was not particularly fast and Damien Seguin (APICIL Group) is now close to Ruyant.

who had to gybe north to avoid the AEZ did not make as much, Maxime Sorel (V and B-Mayenne) and Louis Burton (Bureau Vallée 2), but from Giancarlo Pedote (Prysmian Group) up the second group are only one short day’s racing behind the top duo. And with the new depression arriving from behind the trio Attanasio, Cremer and Burton should catch up more.

Passed under New Zealand at 56 degrees South there is the trio of the young Swiss Alan Roura (La Fabrique) now close to Arnaud Boissières (La Mie Câline-Artisans Artipôle) and Pip Hare (Medallia) racing along the AEZ. On the southern edge of a high pressure area, they can all lengthen their stride in a moderate NW’ly flow.

Good news from Stéphane Le Diraison (Time for Oceans) who had planned to sail to Macquarie Island to sort his mainsail track problems. He finally found a solution with the support of his shore team. He is back in race mode chasing the quick Jérémie Beyou (Charal) who emerged from the Tasmanian depression very well and can now press fast down from the AEZ. Alexia Barrier (TSE-4myplanet) has also picked up her pace after a fright when her backstay (which supports the mast from the back) block exploded! She was able to repair before passing Cape Leeuwin where Finnish racer Ari Huusela (STARK) also crossed last night.

Right now the initiative is with the hunters and many have the chance to make miles and de-stabilise the status quo. The weather situation around the Falklands islands does not look very stable at all for the early New Year and so there could yet be come very close finishes in Les Sables d’Olonne.

Charlie Dalin, APIVIA, this morning…”When you look at the globe and we look towards the Pacific side you only see blue. So Point Nemo the most isolated place on Earth feels like it looks. Here we realize the size of this Pacific Ocean! It is something to be here in this lonely corner. Currently I am 261 miles from Nemo point but I was even closer a few hours ago at the time of my gybe. But I hope that NASA are not planning to drop a satellite here to dispose of it. It would be a pity to be knocked out by space debris here! 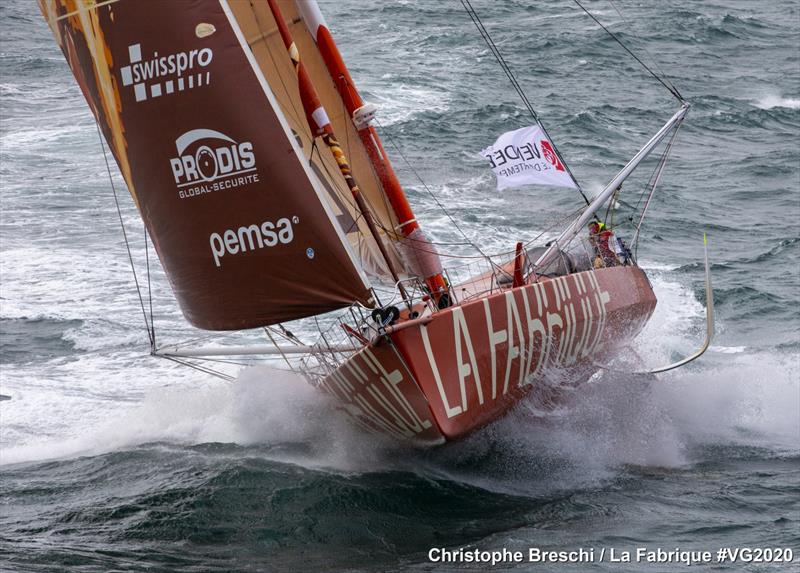 I had a little setback: I had a problem with my foil bearing which I had I repaired. I spent a little time fixing it up a bit more. I slowed down a bit before resuming my speed. And I have less than 24 hours left on starboard tack, which is pretty good news because I will be able to aim for Cape Horn on the other tack. In addition, the wind was easing a bit from behind. The situation is under control now.

Right now, we have more like 25-30 knots of westerly wind and I’m currently in a lighter phase of 25 knots. There is still a good wind. However, the seas are big, the heaviest I have seen since the start. It’s a beautiful Southern Ocean seaway like you see in the books. My port tack was difficult. I had a few broaches and got hit by breaking waves! It was very windy and it was pretty rough. I was never shaken up like this before in other lows. The sea was much bigger than usual. Fortunately, things eased a little later: now, I’m on starboard tack, heading for the AEZ. But the sea is going to get bigger as I move south.

I should be caught up by a front coming from the West: it should reach me tomorrow on December 30 and potentially carry me to Cape Horn in medium northwest. Night is falling (5.30am French time), and there is a beautiful light with squalls and heavy seas: it’s super beautiful! And then, at night, it is not completely dark: there is a moon even if we cannot see it too much, given the cloud cover. It’s nice for setting the sails and maneuvering: I don’t need a head torch.”