He is a Paralympic medallist who has been successful in many different racing arenas including Class40 and the Tour Voile. He grew up in Guadeloupe and is a qualified sports teacher.

Now Damien Seguin is taking on the biggest challenge in solo ocean racing.

In the beginning there was…..
“After seeing the start of the Route du Rhum in 1990 we started sailing in the Optimists with a bunch of friends. It was 30 °, the sea was 28 ° and we thought we were Birch, Bourgnon, Peyron. It was such simple fun, we pushed each other along, we had fun and the time just disappeared when we were on the water.”

Your studies and professional career outside sailing
“Well, really it is hard to separate the two. I followed what you would call a classical education in France before continuing my studies in Guadeloupe. After obtaining a scientific baccalaureate, I started studying biology but had to stop after one year so I could join up with the Pôle France at the national sailing school. Then, I got myself into studies of Staps (Sports Sciences) in Rennes. It was pretty intense. Then I got the CAPEPS at the IUFM to become a sports teacher. It was essential to have a job qualification while practicing high-level sport. ” 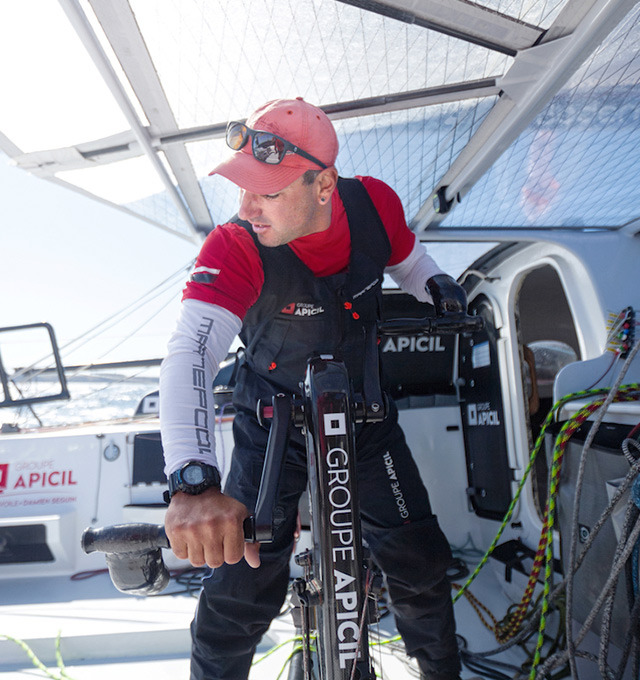 How and why did your desire to race offshore come about?
“The year after we moved to Guadeloupe, we went to the finish of the Route du Rhum 1990. I didn’t know anything about it but everyone was talking about it. It was a revelation. I remember these giant boats, the great sailors who were being asked for autographs. Florence Arthaud, Mike Birch, Alain Gautier, Laurent Bourgnon they were like rock stars. I wanted to do that very same thing, to follow in their wake. ”

At what point and why did it become your career?
“My initial project was to do the Route du Rhum. In 1998, I had a difficult choice to make: either I embarked on a Mini project or I started an Olympic programme. Pushed a bit by the National Sailing School I chose the second option, as I knew it was going to be good structure and foundations to get move into ocean racing. Then after four Olympics, it was the right time to change direction first in the Figaro, then into IMOCA. ”

The result or experience that you are most proud of?
“My whole Olympic adventure. When I took part for the first time, in Athens in 2004, I discovered a unique atmosphere, the world of disability and very beautiful human stories. They are all athletes ahead of being disabled people. They have become my family. And then there is the gold medal at only 24 years old, all the joys (3 podiums, 2 gold medals) and my role as flag bearer and captain of the French team in London (in 2012). It is all part of sports history and I got a tremendous boost from it.” 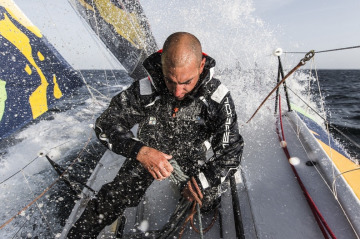 Tack, tack….
What is your main quality in life? “I’m someone who never gives up. My past experiences have blessed me with a very strong mindset and that shows when I am racing. Whatever problems Icome up against in this race, I will do anything to resolve them and keep on fighting. ”
What is your main flaw in life? “Those qualities can be a flaw sometimes. Being so resolute I find it difficult to release the pressure. Above all, I am very demanding of myself and those around me, which I have to say is not always pleasant to live with. ”

If you were an animal? “The tiger, for the eye of the tiger! That was what my coach saw when I was preparing for the Olympics. ”
If you were a plant? “Bamboo because I feel able to take anything and everything and keep going and growing upwards.”
If you were a movie? “Who Framed Roger Rabbit?, for me it is a cult movie! ”
If you were music? “For sure Queen, a toss up between between Bohemian Rhapsody and We are the champions”
Colour? “Pink, no comment! ”
Your dream of happiness? “It would be going with the family for three months, travelling by boat or going on an expedition to the mountains. I have enjoyed both worlds and find them so connected. To live a really timeless experience there with my loved ones would be great. ”
Your hero in life? “The skipper Thierry Dubois (who took part in the Vendée Globe in 1996-1997 and in 2000-2001). He has done everything I want to do: the Vendée Globe, the most prestigious ocean races in the world and now he spends his life on the water! I know him well: he was symbolically the godfather of my boat during my first Olympic Games. ”
A favourite saying or aphorism? “You should never hand over what you can do with one hand”
If you weren’t an ocean racer, would you be? “I would be a scientist”

VENDÉE GLOBE 2020
Your ambitions for the VENDÉE GLOBE : “Write a great story, in every sense of the word. Sporting-wise I aim to give myself the best chance of making the finish and making a good result to be proud of. And beyond that I want to be in the fight to be the top daggerboard boat to become the first sailor with a disability to complete the loop. I don’t know if I am a role model but I want to be prove what can be done. Then parents of children with disabilities can simply say, “we know that it is possible to achieve this, to break free of seeming limitations with one’s passion” ”

Weaknesses (that would keep you from reaching your goal, apart from breakages): “Nothing can stop me from reaching my goal. My weak points are independent of the goal I have set for myself. After that, there are the vagaries that make the beauty of this sport: the chances of being at the finish are the same for all boats, from the most expensive to the most modest. ”

Your special weapon: “My mind and the approach I have that comes from the world of the Olympics. That’s a matter of being very Cartesian, of mastering your goals, of being able to define them and surround yourself with the tools to do the job. That was my strength during my four participations in the Olympics and I prepare for the Vendée Globe the same way! ”

What would a successful VENDÉE GLOBE be for you? “To do the full circle, to get to the finish. And then I hope I can be in the match between the non-foilers and to be playing all my cards to the max! ”

What do you want to share? “As I said before, I want to tell the story above and beyond any result. I want to tell my story of this kid with a handicap who dreamed of the sea and the oceans and who goes on to race solo around the world in the Vendée Globe.”

In three short words, the VENDÉE GLOBE for you is … “The Ultimate Adventure! ”

Three images you have from VG:

1 / The descent down the channel. This is the curtain raiser before the difficulties that await us for two and a half months. So you get the reward even before suffering!

2 / Thierry Dubois or the image of the man upside down on his boat in the southern oceans. Bear in mind that in the Vendée Globe, you can be risking your life

3 / It is an image that does not yet exist but that will be mine a few hours from the finish. It is the image of seeing the boats coming towards me and being torn between the pleasure of crossing the line and the desire for that moment to stretch out for hours. ”

Which skippers inspire you? Thierry Dubois, Loick Peyron and Michel Desjoyeaux. Between these three personalities, you have everything: performance and success with ‘Mich’ Desj’, the jack-of-all-trades aspect in sailing and a detailed knowledge of the history of sailing of Loick and finally the adventurous aspect by Thierry. The perfect sailor is a clone of these three skippers! ”

You wouldn’t go around the world without ? “My favourite pig, which takes many forms on the boat (a figurine in the cockpit, an engraving on the deck). It comes from a regatta we won in Guadeloupe with Thibaud Vauchel-Camus at the end of the 1990s. My father told us: “you are good pigs”, referring to the film Babe