The Puig Vela Clàssica regatta, one of the main events in the Mediterranean for classic and vintage sailing, started today at the Real Club Náutico de Barcelona (RCNB). Over 500 sailors in 44 vessels are taking part in one of the most breathtaking shows of international navigation.

The opening day of the 12th edition will be hard to forget, thanks to the excellent sailing conditions and to the wise choice of the race committee with the regatta’s course.

At 1:00 pm, the starting signal got the two Classic fleets under way; followed by the Vintage gaff-rigged, the Vintage Bermudan and the Big Boats with three other starts. The established course had four legs, starting right off the Port Olímpic towards an outer mark across from the Barceloneta beach, a long running stretch until Masnou, and back to the Barceloneta mark close-hauled, plus a short final leg running back to the start zone. The five categories sailed an identical 18-mile course, which made for an easy follow-up of the race and offered some memorable moments as the different fleets got mixed.

If the course was beautiful and technically demanding, the conditions in the Barcelona regatta field were also superb. The south-west thermal wind was blowing at 16 knots at the start, gradually increasing to an intensity of 21-22 knots. But, fortunately for the small and medium length craft, waves were small considering the strength of the wind, which prevented the close-hauled leg from Masnou to Barceloneta from becoming a nightmare.

Marigold, Cippino, Guia, Argos, and Moonbeam of Fife lead overall at the end of the day.

Suspense in the Classic 1 fleet began right from the start line, when the favourites Guia and Emeraude made an early start and were forced to go back to start afresh, beginning the manoeuvre a little late and, thus, falling considerably behind.

But this initial setback served them as a spur to charge back and become the leaders of the race. As it turns out, Emeraude crossed first and scored third after time compensation, while Guia crossed second but achieved victory after the handicap correction. Between the two, Outlaw slipped in the second position.

In the Classic 2 fleet, Argos had no rival, dominating the final classification with an advantage of more than 6 minutes over Ojalá I, and more that 13 minutes over Madrifa. 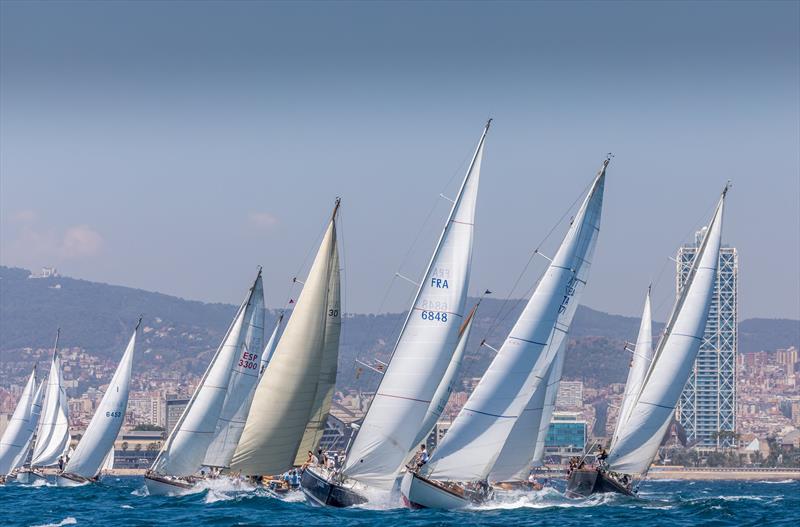 As if it were a Vintage Bermudian match race, the Argentinian Cippino and the Uruguayan Fjord competed and controlled one another unflaggingly over the near three hours it took them to complete the course. Crossing the finish line with a 17-second difference, Cippino raised the margin to 33 seconds after time compensation. The third position on the podium was for Argyll.

The Vintage gaff-rigged fleet saw Marigold as the winner of the day, after keeping Veronique at bay, with an advantage of 1’30”, while Marigan scored third.

The four Big Boats participating in the 12th Puig Vela Clàssica regatta had a clear leader in the Moonbeam of Fife, which knew how to take advantage of today’s strong wind to clearly beat the Halloween, while the Black Swan and the Nordwind didn’t finish the race.