“We had a big push last year, leading up until Christmas. After the break, everyone has come back fresher. Sometimes you need to have a break to make the gains moving forward.

“That certainly happened. The boat had a birthday, or more probably a Christmas,” he said in a video released by the team on Friday, after three days back on the water.

Strong winds which besieged Auckland for much of the Christmas break, eased back into the late teens, on Wednesday.

“It was a fantastic day to be getting back on the water again. We’ve made quite a lot of changes over the break. We had quite a few good hours ripping around the Hauraki Gulf, which was sensational. A fantastic credit to the boys in the shed to get the boat to a better space. 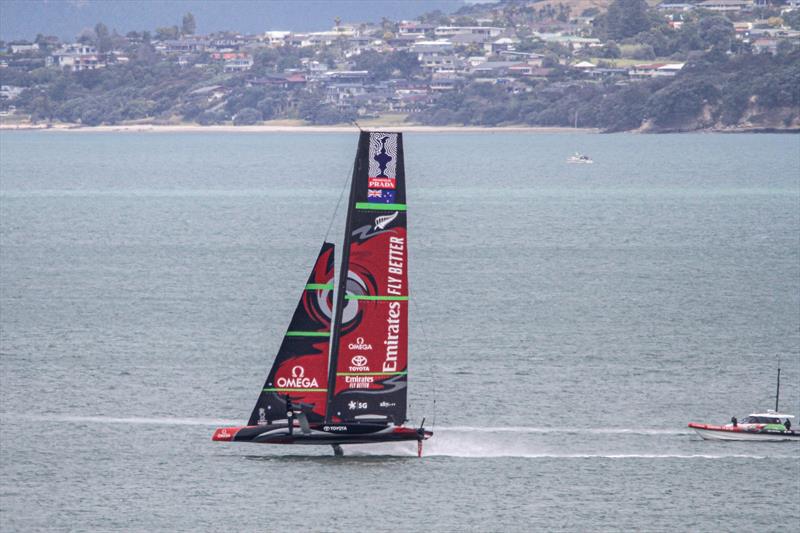 Emirates Team New Zealand in The Paddock – January 8, 2020 © Richard Gladwell / Sail-World.com”Getting back on the water with the changes and improvements has been fantastic.

For Cup spies, the process of trying to deduce the changes made has begun.

Hull shape changes are limited to a maximum of 12.5% of the hull surface, and it would be surprising if some refinements and alternatives had not been undertaken in this regard.

Most obvious is the non-appearance of the bowsprit used to attach the Code Zero extra sail set in winds at the bottom end of the range. The sprit is currently off the boat for reasons which are not entirely clear, particularly as the wind limits for the regattas have yet to be confirmed. The bow area where the sprit was mounted has been tidied up and is aerodynamically clean.

In the 2013 America’s Cup Oracle Team USA removed their bowsprit and Code Zero from the AC72, opting to tradeoff the use of the sail in winds of less than 10-11kts, against the weight saving and resultant easier foiling performance higher up the wind range.

However under the published version of the AC75 class rule for the 2021 America’s Cup, there is no weight advantage as in the AC72 in 2013, and if no Code Zero or bowsprit is carried the boat must carry compensating weight in a specified position in the boat.

The team’s intentions in this regard should become more evident when testing takes place in lighter winds.

The team also seem to have remained with the wide span wings they displayed at the launch, and do not appear to have opted for a shorter wing and ballast fuselage approach adopted by the three Challengers who have launched AC75’s.

In stern shots taken while the team set up yesterday at the entrance to the Waitemata, there were no major changes visible in what is a very simple and clear AC75 layout. One change that was evident on Wednesday was to the mainsail clew adjustment system, but probably more as a refinement of the existing system than a change in direction. Other refinements are also expected to have been made to make for easier and more accurate trimming and set up.

Most of the changes are expected to have been made below decks in the hardware driven by the on-board software and systems.

The team trained well out in the Hauraki Gulf on Thursday and Friday, and in The Paddock off Eastern Beach on Wednesday.

Surprisingly there was only one spy boat evident, with INEOS Team UK watching from a large logo’d RIB yesterday. 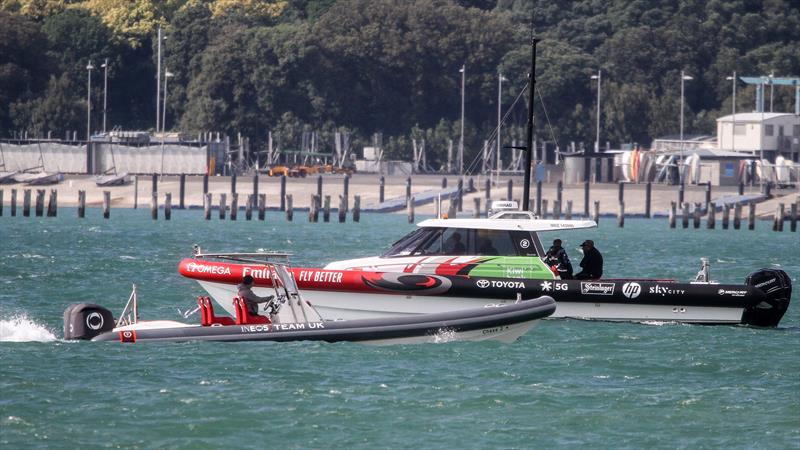 Due to shipping schedules for Cagliari ACWS Regatta, it would seem that Emirates Team NZ will miss sailing in Auckland through the 12month Cup Match period beginning on March 6.

In the past NZ Defences, this period has been used as a test run for the program to run in America’s Cup Match mode. It will be interesting to see how the team handle the lengthy time ahead when the first AC75, Te Aihe is being shipped to and from America’s Cup World Series Regattas in Europe.

However, Team NZ changed the playbook on that approach in the 2017 America’s Cup, being the last team to sail in Bermuda, and went on to win the America’s Cup. The other Challengers are expected to maintain a watching brief on Auckland conditions in the Prada Cup and America’s Cup Match period, with even sailing a permitted development boat in Auckland.

The final event in the America’s Cup World Series, scheduled for Auckland in mid-December, will be the final opportunity for the Defender to test their systems and operations in Match-Mode.

The Defender does have the option to sail two AC75’s against each other once the Prada Cup gets underway in early January 2021. Again Emirates Team NZ’s approach in this regard will be watched with interest.

While two boat testing was a feature of America’s Cups up to 2007 in Valencia, it has not been done in quite the same way since. In 2013 Oracle Team USA did sail their destroyed and reconstructed AC72 platform, skippered by Ben Ainslie, against their race boat. 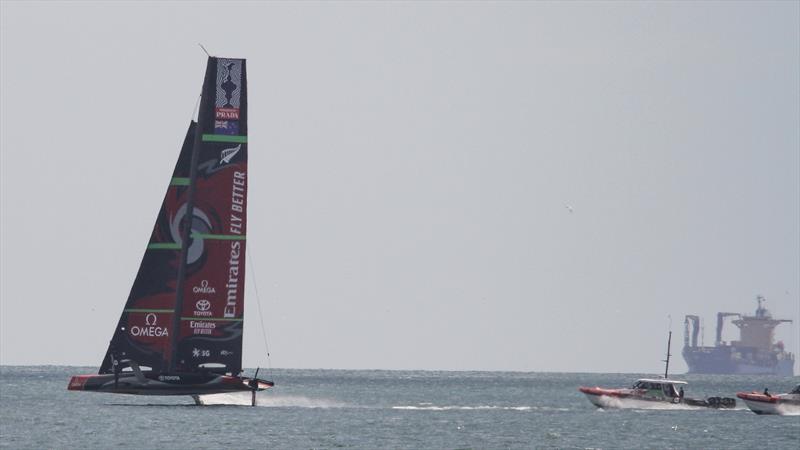 In 2017 a partnership agreement between the Defender, Oracle Team USA and Japanese Challenger, Softbank Team USA enabled both teams to train and information share right up to and through the America’s Cup match itself.

In theory, teams can launch their second AC75 in five weeks, on February 15, 2021. But given the delayed buildup to the current America’s Cup, most teams are expected to leave the launch of their second AC75 until mid-Spring in Auckland. They have the option of a launch at their home bases and freight to Auckland, or assembly, launch and first sail in Auckland.

Under the usually controversial Constructed in Country provisions of the Protocol governing the conduct of the 36th America’s Cup, only the hull of the AC75 must be constructed/laminated in the country of the challenging Club. Spars, sails, appendages and even replaceable bows and sterns may be obtained in any country. The carbon foil arms and the in-hull mechanism to raise and lower are supplied one-design parts.

Teams are expected to start occupying bases, currently under construction in Auckland, after the conclusion of the second America’s Cup World Series regatta in Portsmouth, UK, in early June 2020.