Sutech Musto Racing is the new Australian 16ft skiff champion, winning by the narrowest margin in an enthralling game of snakes-and-ladders on the final day at Port Stephens NSW.

The Manly skiff, helmed by Daniel Turner with Angus Williams and Matt Stenta, crossed fourth in the final and deciding race to finish on equal points with St George’s Brydens Lawyers (Lee Knapton). It was enough – just – to give them victory on countback, via an additional race win.

After a solid week of racing, ultimately it came down to two boat lengths and fewer than 10 seconds, with Tooheys Extra Dry hot on Sutech Musto‘s tail during the run to the finish. 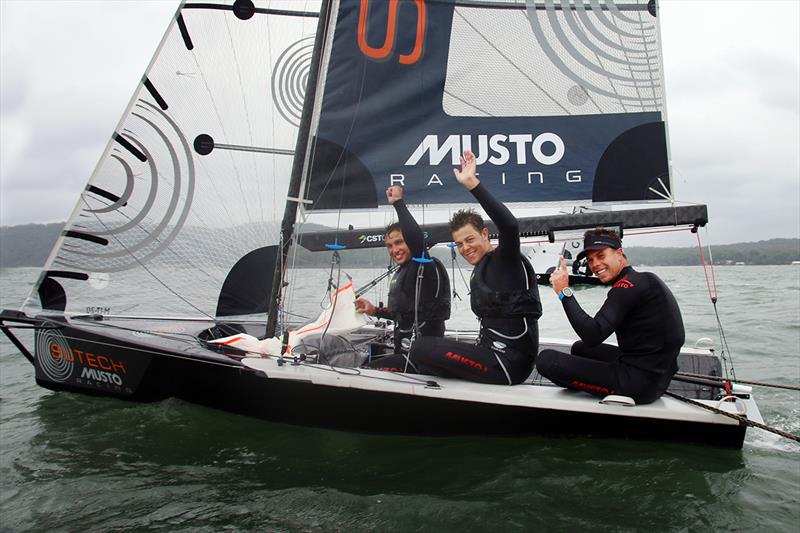 They call him “Roughie”, but Turner showed some smooth sailing under intense pressure to bring home the title.

“It didn’t look quite so smooth from our angle,” Turner later admitted. “We were a bit in-and-out of the groove, our rig decision was a tough one, but what can you say… we got there.

“We’re pretty comfortable in the range between top-end of the big rig, and lower-end of the little rig, so it didn’t faze us that much.”

Sutech Musto started three points clear of both Brydens and Koreman Marine Composites, which meant it couldn’t cover both boats. At one stage they drifted back to 8th, while Brydens led handsomely. 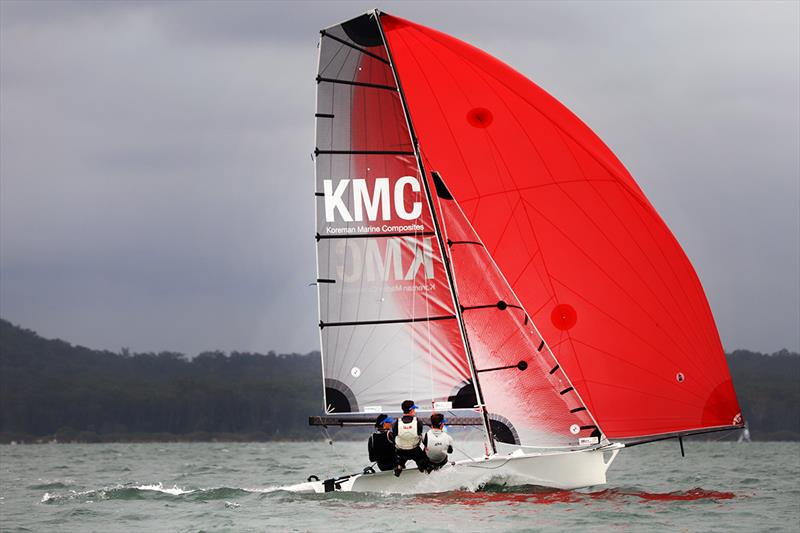 “That’s standard,” Turner joked. “But this bay has delivered give-and-take all week long, so you just have to make sure you’re on the ‘take’ side as much as possible. It was probably one of the hotter races of the week but we just worked on our own roles and tried to grind away.”

Sheethand and tactician Angus Williams said the last 100 metres were as nerve-wracking as it gets: “It was all on the line. We set up, hoping for the best, and once we crossed the line there was just elation. It paid off.”

The win meant everything to Turner, a third-generation skiff sailor whose brother, Joe, had also secured a national title. Sutech Musto had also been on the wrong side of the countback at the NSW titles.

“I’ve been sailing these things for over 10 years and had plenty of podium finishes. This year, a lot of things had to align to make it possible. It’s massive,” Turner added.

“There are some impressive names on that trophy, and it goes back a very long time. It’s a monkey off my back, absolutely. In fact, I said to the boys that I can retire now, but when you look at Lee Knapton’s resume I still have about 20 years left in me.”

Knapton, Peter Mackie and Ricky Bridge turned on a masterclass aboard Brydens Lawyers to take the championship right to the wire, winning by 3 mins 38 seconds over second-placed Imei on the day.

“It took us to the last race to do it, but that’ll do,” Knapton said. “We also left it to the last minute to decide on the big rig, and it was absolutely the right call.

“Before the start there was plenty on, but once we settled into race mode we were comfortable. Most of our gains came on the top part of the course where we hit the flatter water and it was a bit lighter.”

Knapton showed commendable sportsmanship when he learned that Sutech Musto had eclipsed them on countback: “Good on them,” he said. “It’s been close racing for the past couple of seasons, which is great for the class.”

“We had a decent start to come around the top mark in the top 12, then clawed our way through the fleet,” Wilmot said. “I got nervous at the end that we’d spoiled the party for Sutech Musto but I’m glad we didn’t. It’s good to bring the trophy back to Manly again.” 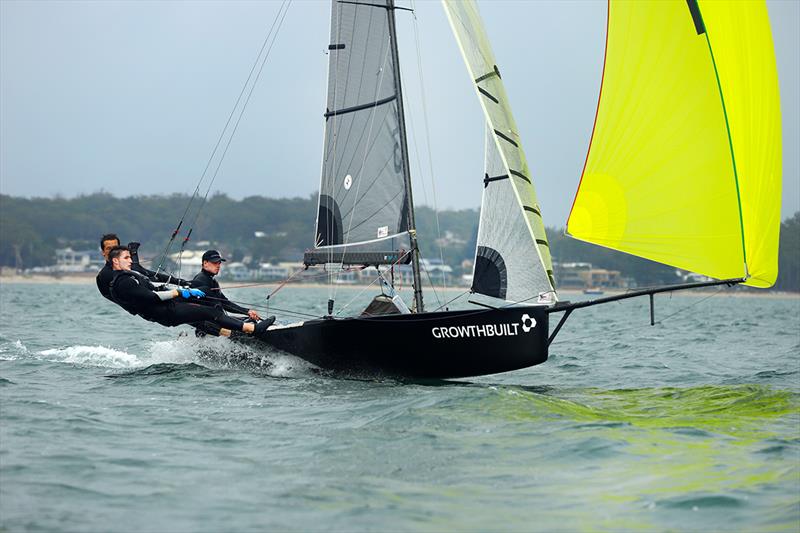 Race 9 Growthbuilt 3rd across line and overall – 2020 Australian 16ft and 13ft Skiff Championships – photo © Mark Rothfield
Growthbuilt finished 7th at the recent NSW titles and 4th at last year’s nationals, so Wilmot was rapt with the improvement: “We’re happy in all conditions really and nice to see that we’re climbing the ladder.”

Ryan’s cousin, Nathan Wilmot, finished 6th despite the 2nd placing in the final race, highlighting the remarkable depth of talent among the class’s top contenders.

In the 13ft skiff championships, young Manly skipper Harry Parker, on AWOL, also pulled off a Houdini by coming from 2 points adrift to beat James Downey’s Bigfoot Bags and Covers. AWOL’s race 9 victory proved the difference, as Bigfoot could only manage 4th.

Lara Quigley from St George was the handicap victor on One2Three.

The 2020 nationals will go down as one of the best in recent history, as the holiday destination of Port Stephens turned on a raft of challenging conditions for the fleet of fifty-one 16ft skiffs and seven 13s. Race Officer Hugh Lester and his team showed considerable expertise in setting courses and managing the on-water aspects.

Manly 16s won club bragging rights with four of the top 6 finishers, while Belmont boats rounded out the top 10.