The 43 year old winner of the last Vendée Globe took 2 days 5 hours 20 minutes and 34 seconds to claim the seventh stage victory of his La Solitaire career, one which now spans 20 years and two overall victories in 2010 and 2013.

While Le Cléac’h takes over the top spot on the General Classification after two stages, Britain’s Sam Goodchild delivered Britain’s first podium finish in the modern era of the race, certainly since Clare Francis won the final leg from Kinsale to Le Croisic in 1975. 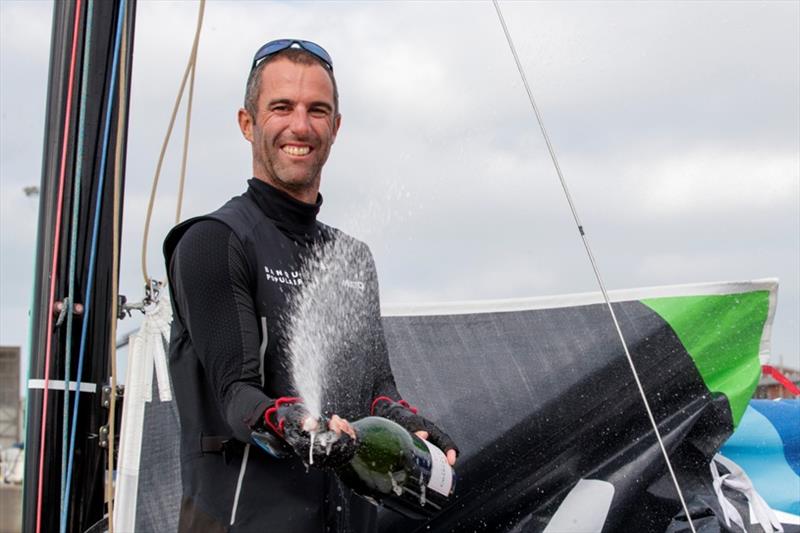 Thirty year old Goodchild, who spent the first six years of his life cruising the Caribbean with his parents before taking up racing as a teenager at school in England, finished second 34 minutes and six seconds behind Le Cléac’h and two minutes and 22 seconds ahead of three times La Solitaire winner Yann Eliès (Queguiner Materiaux-Leucémie Espoir).

Goodchild overhauled Eliès in the final miles to the line to find himself sandwiched between the only two multiple winners of La Solitaire. He moves into third overall 43 minutes and 59 seconds behind Le Cléac’h and just six minutes and 29 seconds behind second placed Xavier Macaire (Groupe SNEF)

“Passing Yann was the cherry on the cake.” Smiled an exhausted Goodchild who was ninth on the 642 miles first stage round Fastnet and back, “When I moved to France ten years ago I looked up to these guys and admired them. Yann was winning the Figaro back then and to be on a podium between the two of them today is pretty special. I didn’t expect it to happen and it’s really cool. I’ll try to keep the good work up for the rest of the Solitaire.” 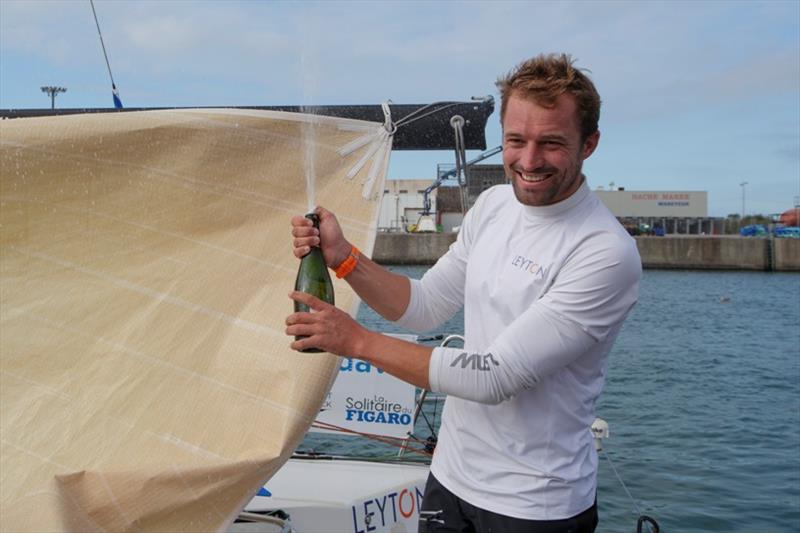 The British solo skipper is in his first year back to La Solitaire after a four year break, and is on course to better his 11th overall in 2014. Scoring a second and first in the warm up races before La Solitaire showed was on form despite this being his first season in the Figaro Beneteau 3.

His second place today came as a result of good speed, solid tactics and patience, picking off boats throughout the second two legs after rounding Eddystone Lighthouse in sixth.

Goodchild acknowledged “Armel has had an awesome race and led from beginning to end so it’s the best I think I could do after he called the right shot in the first leg. It was slow in coming. It happened with one move at a time and went boat by boat. I’m really happy with second for sure and I’ll just have to try not to let it put too much pressure on for the rest of the Solitaire.” 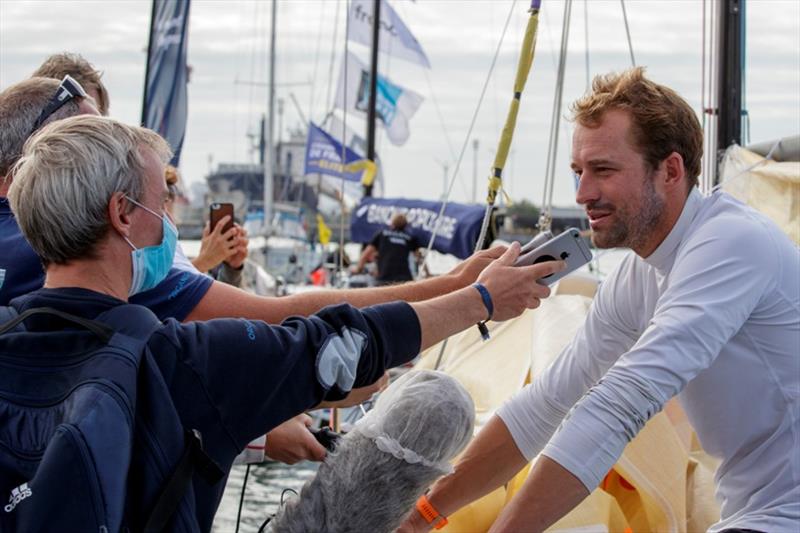 Le Cléac’h’s stage win is his first since 2013 when he won from Porto to Gijon but he appears to feel his game is reminiscent of his 2010 overall victory when he triumphed on three of the four stages.

“I have the feeling of being in harmony with the boat, with my strategy, but also of being good in terms of speed, an area in which I maybe was not so good on the first leg. I managed to do what I wanted. I positioned myself well and when I took the lead at Eddystone, I was happy with my strategy, it gave me confidence for the future.” The current Vendée Globe champion commented, “. I’m super happy, it’s certainly my seventh stage victory, but above all it’s a good stage victory, I am happy with the way it came, it was strategically built and after that, there was the good speed, everything was fine all the way, I am 100% satisfied.”

On the northwards climb across the English Channel to Eddystone Le Cléac’h made his winning move, erring furthest to the east where he was best positioned for the windshift which came as an occluded front dissipated.

After tacking his leverage to the north of the fleet proved definitive and he was able to lead at the turn off Plymouth, and was never challenged by the chasing pack on what proved a very intense final 100 miles gybing down a narrow corridor bound by the shipping lanes to the north, as they skirted the busiest shipping lane in the world.

“That choice, several routings gave it, but there was an element of risk of falling into a light winds, Armel went there, not the others”, admires Christian Le Pape, the boss of the Finistère Course Offshore Training group at Port-la-Forêt, where Le Cléac’h has been training since his beginnings in the Figaro Bénéteau almost twenty years ago.

“It was slightly gutsy, maybe, but I think he probably saw the cloud had moved away in front of him, suggesting the occlusion was going.” Suggested Marcel van Triest, who works on weather strategy with Le Cléac’h as well as Goodchild. 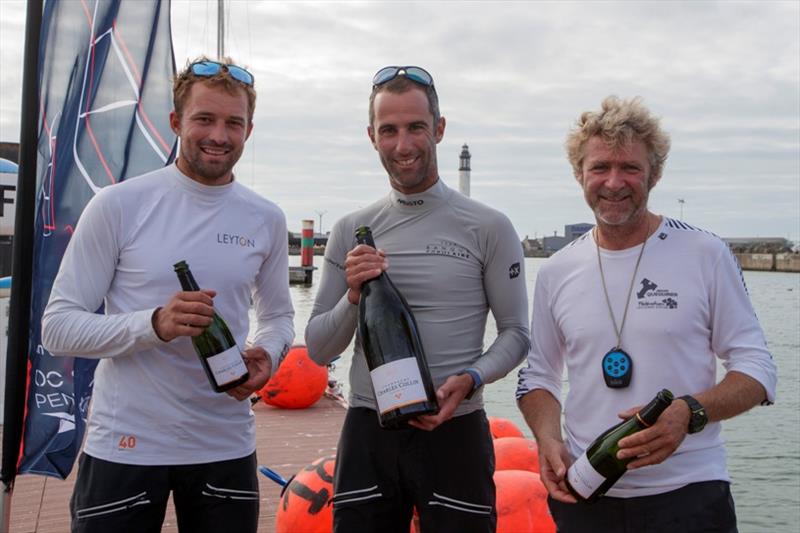 The winning French skipper reported this morning. “I was determined, fairly certain of my choice, I really wanted to position myself in the north of the fleet to anticipate the wind shift. It went well and allowed me to pass Eddystone in first place and to escape. When I felt that it was starting to slacken a bit ahead after Start Point, I took the opportunity to put press on, I steered a lot, because I knew that those meters were going to count double. ”

With this seventh stage win Armel Le Cléac’h leads overall and is the new man to beat in this 51st edition and given the determination and concentration displayed he has shown since Sunday’s start on the Baie de Saint-Brieuc he may well be on course to join the elite group of five triple La Solitaire winners.

Ireland’s Tom Dolan (Smurfit Kappa) retained an excellent level of consistency backing up his tenth on the first leg with an 11th to lie 11th overall. 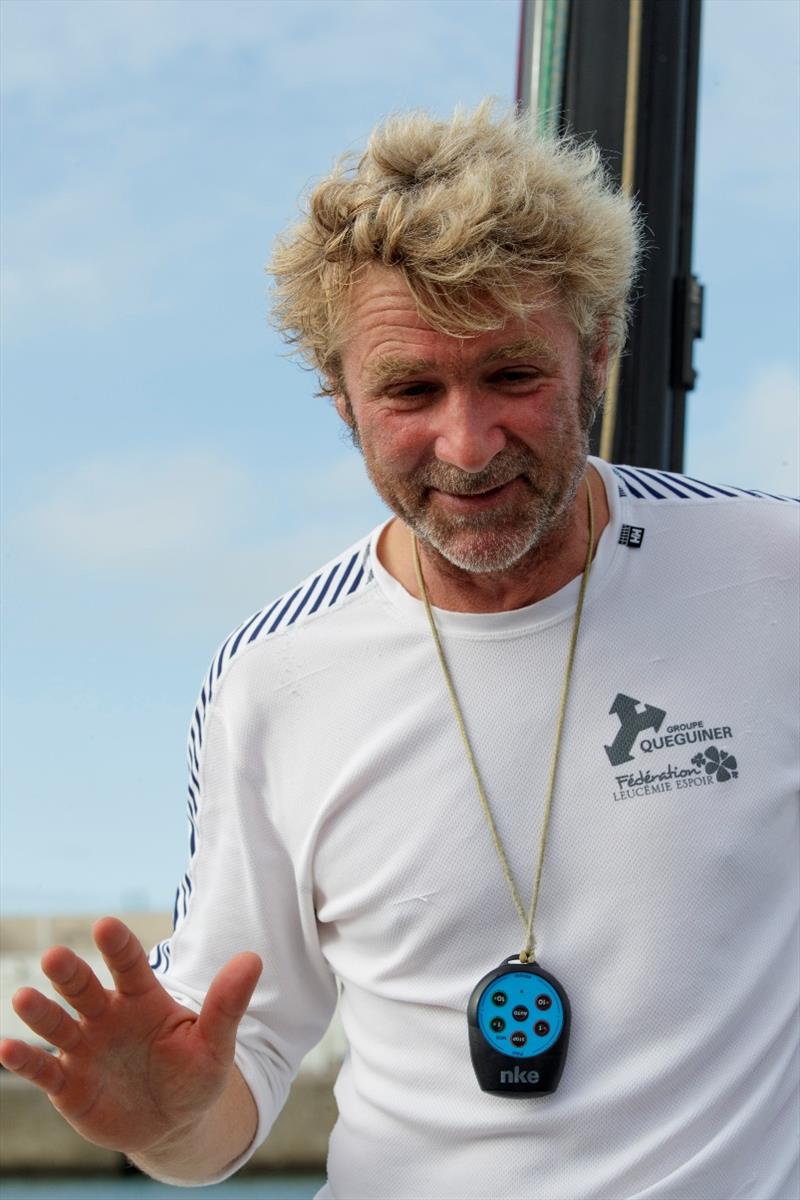