The Banjo’s Shoreline Crown Series Bellerive Regatta gets under way on the River Derwent this Friday night, with the racing expected to be intense across all fleets and divisions, none more so than the Division One Keelboat Racing Group.

Ed Psaltis (Midnight Rambler) is widely tipped to do well in the regatta and will be high on confidence after strong results in the Combined Clubs Summer Pennant where he leads Division One on IRC and on performance handicap and is coming second in AMS.

Psaltis can expect some stiff competition from the Mumm 36 fleet which is virtually a division within the division, with the locals challenging for the unofficial Mumm 36 Worlds Cup.

Local sailing identity and Bellerive Yacht Club stalwart, Jeff Cordell (B&G Advantage), holds the Mumm 36 trophy, but he will need to keep a close watch on Gavin Adamson (Madness), Matthew Keal (Heatwave) and Alan Nelson / Mike Woodward (Joint Custody) who each have their eye on the prize.

Heatwave skipper Matt Keal knows they have their work cut out to beat Cordell. “Jeff is probably the toughest competition on the course but Gavin has also had a pretty good season, but we will be doing everything we can out there to get our name engraved on the Cup – I think it’s actually our turn,” said Keal. 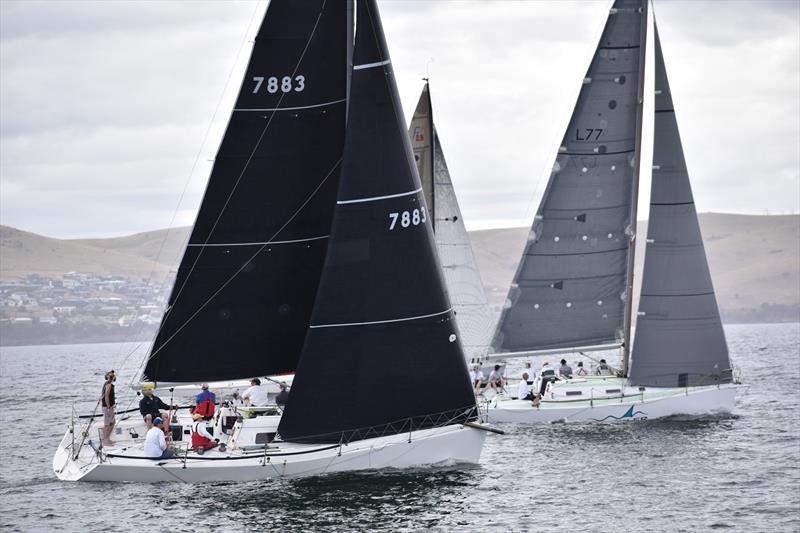 And Nelson is hoping for some beginner’s luck out on the racecourse. “We’re the new kids on the block so most of the pressure is on the other guys really. B&G is still the boat to beat but Heatwave and Madness will be keeping them honest. It’ll come down to crew skill and who makes the least mistakes on the water. We will have our best crew on board and will be giving it everything,” said Nelson.

The Mumm 36, designed by Bruce Farr under strict one design rules, scored the classy name from Mumm Champagne which was the Class sponsor for an international regatta many years ago.

The Bellerive Yacht Club’s unofficial Mumm 36 Worlds started as a tongue-in-cheek, gentleman’s challenge between Ian Stewart (TasPaints) and Cordell a decade ago.

According to Cordell, the rules are simple. “Whoever crosses the line first the most times receives a slab of beer from the one that didn’t. In the spirit of competition, this was to be consumed on the winner’s boat. Over the years it has brought together the competing crews and has initiated many friendships which are still close today,” said Cordell.

“In some years the competition has been intense with only 10 metres separating the boats on the finish line. It’s hard to predict who will be the favourite his year with all four boats having had their share of wins this summer, but one thing’s for sure, it will be hotly contested,” said Cordell.

Cordell will also been defending his 2019 Tasmanian AMS Championship win.

Sailing for Racing Group Division One starts on Friday night with a twilight race and continues through to Sunday afternoon.