Posted by: YachtBoatNews in Sailing & Yachting 10/05/2020 Comments Off on Energy Observer 37 Views

Energy Observer’s first transatlantic passage, from Finistère to Martinique, served as a test bed for this year’s key innovations in renewable energies aboard the floating laboratory.

Indeed, thanks to the optimised synergy of her new fuel cell system developed with Toyota, her automatic wings, her new solar panels and her innovative propellers, this long passage could be completed totally self-sufficiently in terms of energy with a hitherto unprecedented level of performance. 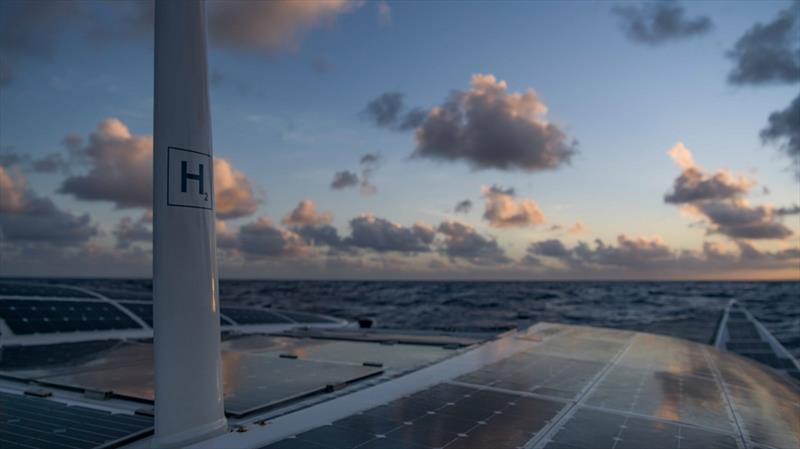 The first part of the course, from Brittany to the Canaries, involved headwinds and any hopes of slipping along in the trade winds were unfortunately replaced by hours of close-hauled sailing in tough seas. On this type of passage, the variable pitch propellers worked a treat, stabilising the air flow over the wings whilst consuming little electricity.
4kW injected into the engines enabled a 30% gain in speed on average, but above all it translated as an ability to sail at 25 degrees to the true wind instead of 40 degrees! As such, the gains were substantial, proving that the combination of H2-Wings-Propellers is highly complementary. Energy Observer has not been a sailboat for a long time. Indeed, the 35m” that make up each of the OceanWings® could not really propel the 35-tonne catamaran forward on their own (at least 350m” would be required, which is the surface area used by Sir Peter Blake to bring home the Jules Verne Trophy… albeit with a boat some 20 tonnes lighter!). However, the thick profile of these fully automated wings, backed up by electric propulsion, form a particularly efficient, economical and reliable combination. More than half of the passage was covered using this multiple renewable energy hybrid mode.

Hydrogen and the new fuel cell, key links in the energy chain

From the Canaries to Cape Verde, speed was king thanks to the downwind conditions and the mixture of Hydrogen-Wings. During the day, all the solar energy was injected directly into the propulsion to optimise speed. At dusk, with the batteries at around 20% of their capacity, the fuel cell kicked in automatically to instantaneously bring them back up to the standard level. In this way, the speed could be maintained whilst staggering the nocturnal peaks in consumption (meals, onboard life, data sending, hot water produced using the heat from the fuel cell). There were no bugs, no alarms (even though the boat features several hundred of them…) no anomalies and in fact the Toyota Fuel Cell System developed by Toyota and Energy Observer Developments put up a faultless performance in the Atlantic waves, starting up automatically and silently every night. In a matter of seconds, it supplied the floating micro-grid with precious calories and kilowatts with clockwork regularity.

Slowing to the speed of the sun

The last section as far as Fort-de-France was slightly atypical because, despite some regular trade winds, there were some unprecedented constraints due to the coronavirus. At risk of being confined on arrival in Martinique if the passage had lasted less than 14 days from Cape Verde, even though the crew had not been able to disembark there, the captain reduced speed towards the end of the passage by balancing it out using solar production alone. The latter often achieved an instantaneous 20kW, notably thanks to the latest generation vertical solar panels developed with Solbian. In upward of around 18 knots of downwind conditions, the additional thrust from the propeller becomes less productive. In this way, some new piloting rules were coded during this crossing. For example, when the sensors no longer detect sufficient torque on the propeller shaft, the latter is locked and the propeller blades automatically feather to limit the drag. It’s also possible at this stage to reverse the direction of the blades to produce electricity using hydrogeneration, which was tested during these fast periods, albeit at the cost of an obvious reduction in pace that has to be allowed for. 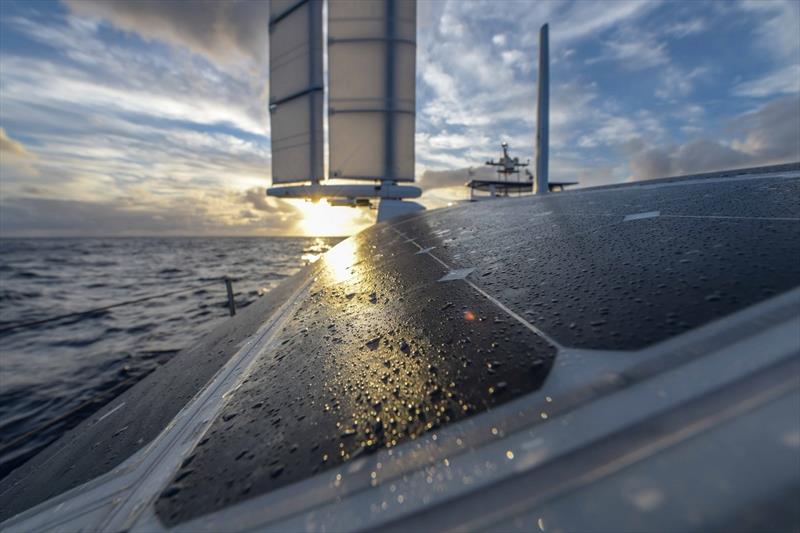 A passage completely self-sufficient in energy, without compromising comfort or safety

These energy performances enabled the crew to feel confident about the passage, even though it was far from ordinary. Indeed, having set sail from France prior to the lockdown, other vessels were very few and far between, the crew only spotting one cargo ship and the rower Stéphane Brogniart, with no sails on the horizon until they were dockside in the West Indies. With all the ports being closed, it was impossible to stock up on fuel, water or provisions. However, the majority of sailboats or modern yachts that cross the Atlantic, despite the frequent use of small wind turbines or solar panels, need diesel to balance out their energy needs. With its multiple touchscreens, its automatons and computers, the thousands of sensors which send data about the various systems via satellite every 10 minutes, its three large refrigerators and cold rooms, its breadmaker and its multiples robots (SMEG is testing all its ranges aboard…), its 100% electric galley and all the equipment synonymous with a large vessel, Energy Observer enjoyed excess energy throughout the journey, with unusual levels of comfort.

Therefore, this transatlantic passage has validated the unprecedented levels of performance and reliability of this self-sufficient mini-network of energy. So much so, that one could now confidently envisage weeks of exploration in the most remote biodiversity sites, from the Amazon rainforest to the Galapagos, even when a stopover is prohibited and the majority of boats are pinned to the dock. That’s lockdown at sea then, albeit in complete autonomy thanks to the wind, the sun… and the features of the most common molecule in the universe: hydrogen.