The GC32 foiling catamarans are one week away from entering into combat for a fourth and final time in 2021 with the GC32 Mar Menor Cup which runs from 3rd to the 7th November.

This grand finale represents the first time the flying multihulls have visited Spain’s famous 170km² salt water lagoon located near Cartagena on the Costa Calida, within the Autonomous Community of Murcia. The event is being hosted by the Club Náutico Lo Pagán with the support of the Turismo Region Murcia, the Autoridad Portuaria de Cartagena and the local municipalities of San Pedro del Pinatar, Cartagena, San Javier and Los Alcázares.

The outcome of the GC32 Mar Menor Cup will decide the overall winner of this ninth season of the GC32 Racing Tour.

At present the favourite to take the title is Alinghi, the team of two time America’s Cup winner Ernesto Bertarelli. With Arnaud Psarofaghis helming, the Swiss team won the two opening events of the season in Lagos, Portugal and last month were on track to defend their GC32 World Championship title in Villasimius, Sardinia, until it was unexpectedly prised off them by Red Bull Sailing Team on the last leg of the last race. Nonetheless on the leaderboard going into the Mar Menor event Alinghi holds a solid three point lead over second placed Red Bull Sailing Team.

The team most strongly on the ascent in 2021 has been another from Switzerland, Christian Zuerrer’s Black Star Sailing Team. Helmed by New Zealander Chris Steele, they came close to winning the second event in Lagos at the end of July. “We made a big step forward this year and I hope we can continue,” said Zuerrer of their prospects next week. “We are still on the podium, but like at the Worlds, you can have a good day and be in front or have a bad day and be at the back. We are definitely look forward to Red Bull and will do our best.” 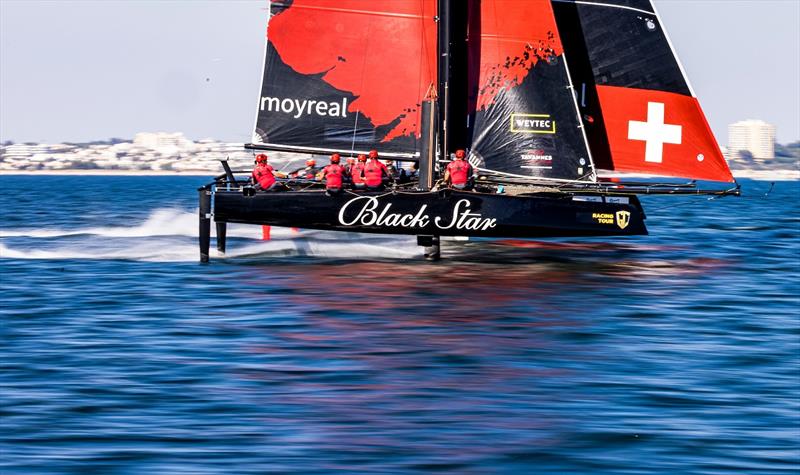 As the season has progressed the standard has raised across the entire fleet to the extent that all of the teams taking part are capable of winning races and since Alinghi’s run-away debut to the season in Lagos, all the events have been ultra-close. “For me it makes for interesting racing when you are close together and everyone can beat each other,” continues Zuerrer. “Hopefully, that will help attract other owners and other teams.”

The majority of the GC32 teams have not sailed or raced on the Mar Menor before. However being near-locked, separated from the Mediterranean by a 22km long sandbar ranging in width from 100 to 1,200m, means that the lagoon can provide not just the optimum windy, flat water conditions but also high salinity water enabling the flying catamarans to achieve their highest speeds approaching 40 knots.

Zuerrer personally has sailed on the Mar Menor only once before, on a foiling Moth and for fun, not racing, but acknowledges that it is a perfect venue for foiling boats. The team which has most experience of the lagoon is Alinghi, which has previously spent most of a winter training here. “It was really flat and we had good wind,” advises Alinghi’s Yves Detrey. “I have never seen anything this flat before. It is really good.” 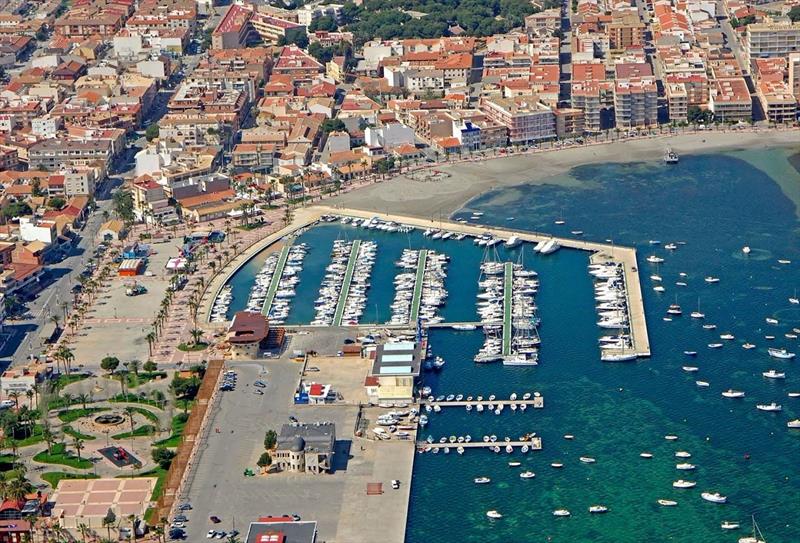 Racing will take place out of San Pedro del Pinata on the Mar Menor’s northern corner where the GC32 Mar Menor Cup is being hosted by the Club Náutico Lo Pagán.

The event is part of the Spanish celebrations marking the 500th anniversary of the circumnavigation of Ferninand Magellan, that was completed by Spanish navigator Juan Sebastián Elcano.