While it may have been their turn to be top scoring boat on day three of the GC32 Oman Cup, the maths is not looking great for Oman Air in their fight with Alinghi to become 2019 GC32 Racing Tour champions.

Going into the final day tomrrow, whichever teams comes out on top will win the big prize. Currently the local heroes led by Adam Minoprio are 10 points adrift of the formidable Swiss with potentially five races still to sail tomorrow and with the fleet down to five now following Argo’s untimely breakage yesterday. 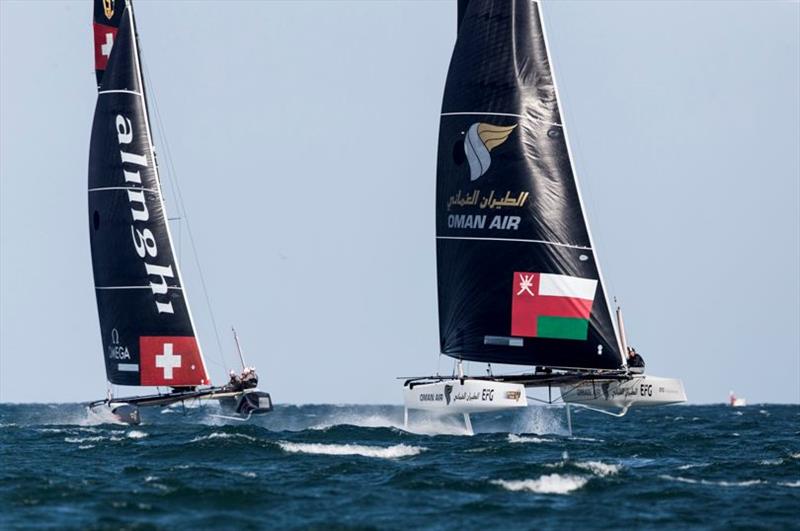 “If it is a fraction windier and we start cleanly – we are definitely strong in those conditions. So it is very doable,” says Oman Air’s long serving main sheet trimmer/tactician, Peter Greenhalgh.

Today the wind was the strongest it has been all week off Muscat’s Al Mouj Marina, building to 15 knots but bringing with it an increasing sea state, creating another challenging day for the teams, all of whom ‘went down the mine’ at some point. The increased wind provided the welcome opportunity for PRO Stuart Childerley to run reaching starts. Usually Oman Air is good at this these, but Greenhalgh admitted that today they weren’t. In fact in one race, the tables turned when Alinghi had match raced them and got them all tied up. “We were a sitting duck and made it all too easy for them. We have a lot to chat about in our debrief tonight…” admitted Greenhalgh.

With the wind 060-075 degrees, the right side of the course seemed to be paying on all fronts, and, apart from the larger sea state, the racing resembled Lake Garda with boats overstanding and coming back from the far right fully foiling. As Greenhalgh observed: “Our VMG on the foils with a good shift is just fine. You can get a double gain.” Then it was a case of going pedal to the metal on the run, without piling it in. “There were so many speed bumps and potholes on the race course and we all had our turn of falling into the potholes.” 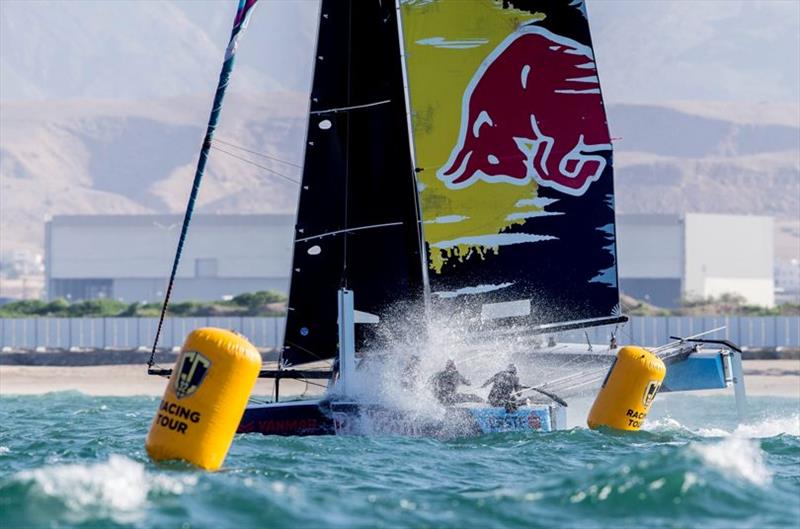 For Alinghi all is looking good, ending the day not only 10 points clear, but with another boat, Erik Maris’ Zoulou, nicely placed between them and Oman Air. Tactician Nicolas Charbonnier said they had started well, or at least much better than Oman Air, but their lay lines calls could have been better. “Our goal of the day was we don’t care if they are ahead of us, but we can’t lose too many points in one race.” In the end they scored 12 points today to Oman Air’s nine, masterfully luffing Red Bull Sailing Team on their way into the final mark in today’s second race -a move that won them the first of their two bullets today. 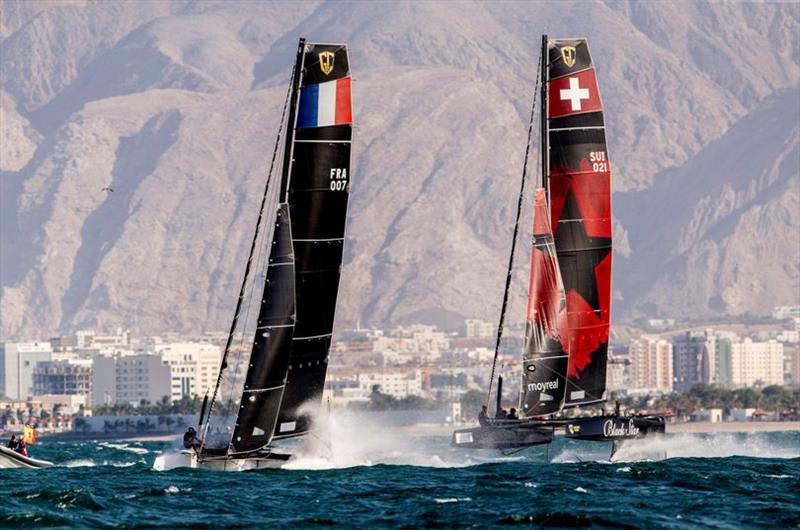 Alinghi was also foiling upwind, a definite advantage as it lessens the chances of being slowed by the waves, but Charbonnier added that they were not pointing high – that would have improved in more wind. “But then if it gets too bumpy. One race we were leading at the reaching mark and we nose dived and ended up fourth!” 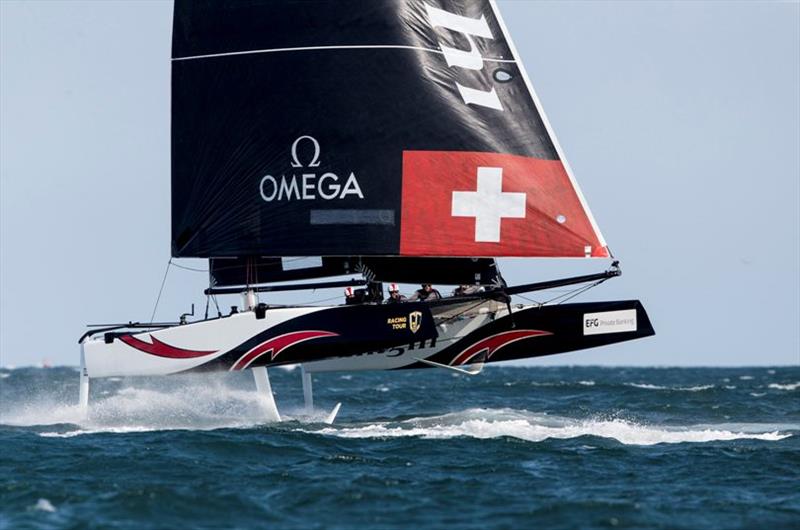 Elsewhere Christian Zuerrer’s Black Star Sailing Team had a difficult day, perhaps slower to react to the change to reaching starts and suffered at least one particularly bad nose dive. While the left was mostly not favoured, it did come good in the final race for Black Star Sailing Team which finished second behind Alinghi in a Swiss 1-2.

Zoulou also put in a solid performance with two seconds, with Erik Maris back on the helm, despite having only arrived in Muscat last night. 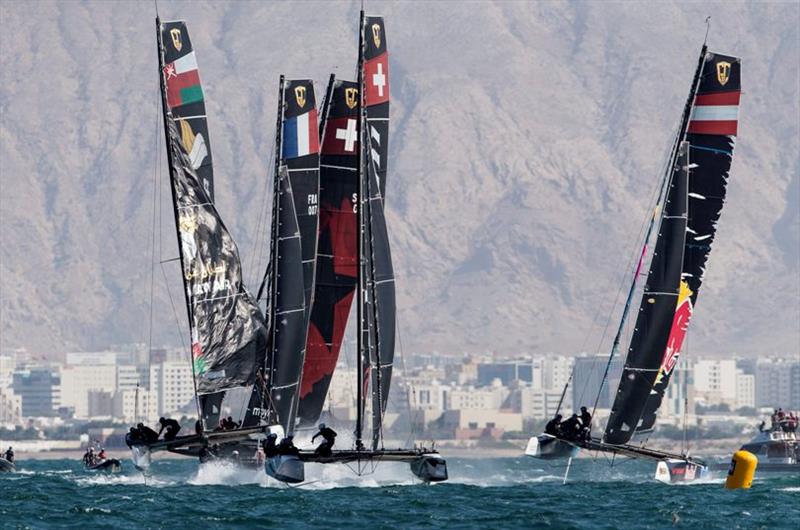 Red Bull Sailing Team looked set to win today’s second race until Alinghi got beneath them and luffed them en route to the final mark.

“It is always tricky to sail in these conditions, because the edge where you can go with this boat is very narrow, so you need to be very exact and if you make one mistake you can lose 100m,” said Red Bull Sailing Team’s Hans Pieter Steinacher. “In one race we picked up some plastic on our foil and then struggled to keep the boat foiling…” 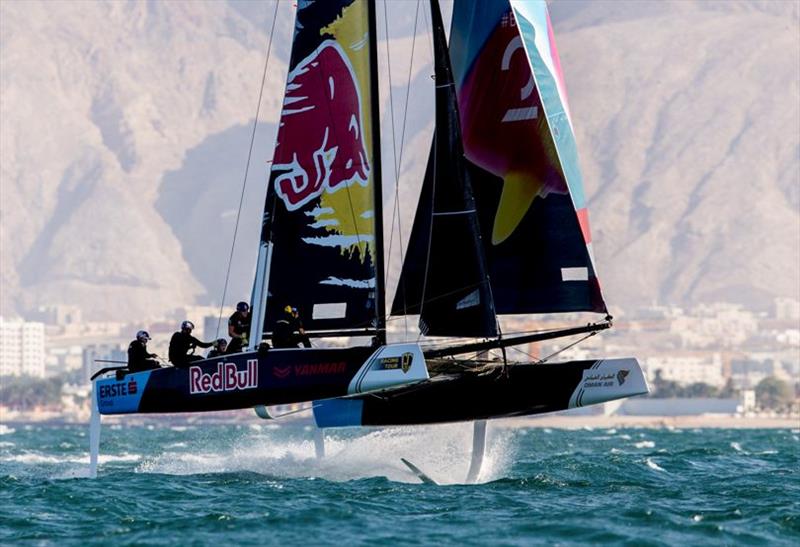 For tomorrow’s all-important show down, the forecast indicates that there might be more wind but more sea state too. It could be the most challenging day of the year. Greenhalgh ponders: “It will be all-on with both teams having a good old go at each other. We want to make so that they [Alinghi] have to fight extremely hard to win!”

Due to the forecast racing has been brought forward and will commence at 1000 local time. 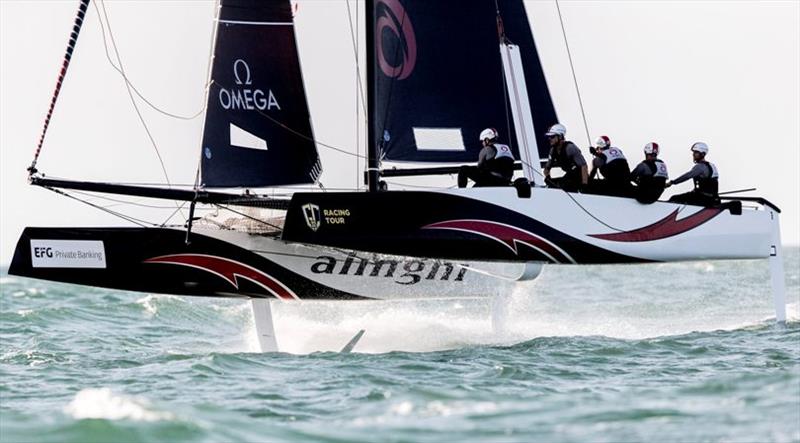 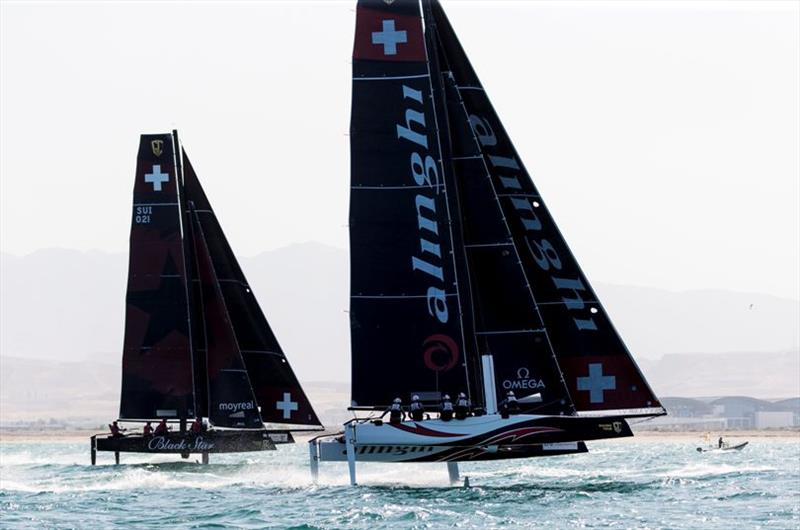 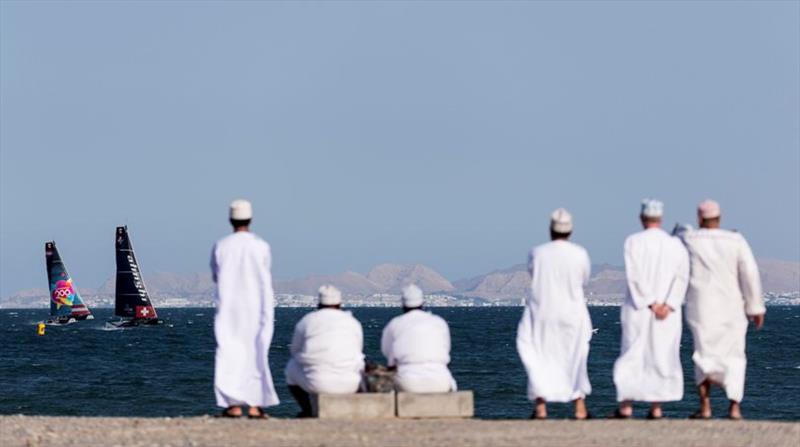