The 2022 Islands Race, co-hosted by San Diego Yacht Club and Newport Harbor Yacht Club, has been a known for a decade as the start to the offshore sailing season. The 142 nautical mile race around Catalina and San Clemente Islands featured 42 boats this year — the biggest turn out in its 13 year history. One boat in particular, Pyewacket 70, showed up ready to prove their preparation for the race is on point, and the set the pace for their offshore season.

Owned and skippered by Roy Disney, Pyewacket 70 is no stranger to success and doesn’t plan on surrendering anytime soon. Right from the start of the race, Pyewacket 70 gained a solid lead on the rest of the fleet. In fact, the team finished three hours before the next boat, with an elapsed time of 12 hours, 27 minutes, and 32 seconds. In 2021, the team finished almost two hours quicker. However, we all know one thing about the sport of sailing — we can’t always predict the wind.

Even with their win, Pyewacket 70’s race wasn’t without its own challenges. At the start of the race, the team was presented with a loud “bang.” The big winch that controls the running backstay had failed,” explained Tactician Ben Mitchell.

“With the wind straight out of the west, it looked like an easy fetch to the west end of Catalina Island for the first turn of the course. The goal was to sail close to the mark but to error in the fast mode…which worked well. The wind headed as the fleet approached the Island and our chosen course paid nice dividends. We finally caught up with all the boats that started ahead of us just as we approached the west end.” 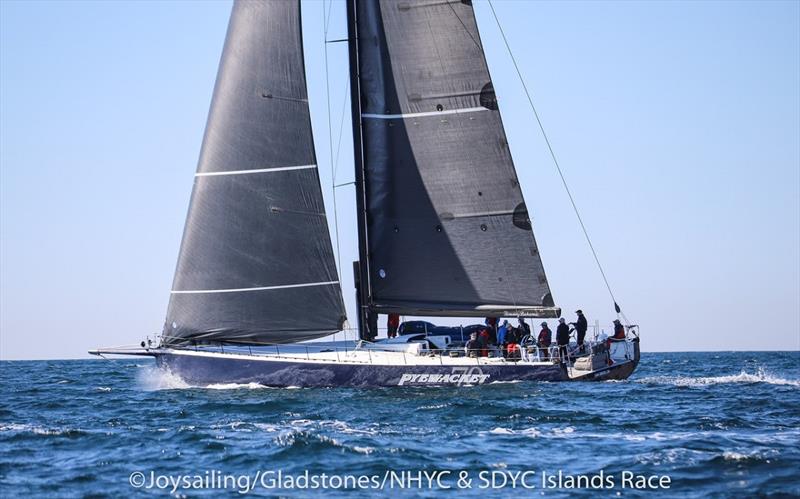 “Sailing a 70-footer with really big sails is always a challenge to execute maneuvers quickly and efficiently, but we have a really good and experienced crew. Other than the broken winch at the start, all changes went smoothly,” finished Mitchell.

Conditions on the race were mostly great. Sunny days, a clear cool night and relatively smooth seas were appreciated by the sailors. But the overall wind velocity was slow to build. The beginning of the race only saw about 7-9 knots eventually picking up to an average of 15 knots. Holthus reported sailing a fair 10 knots right around sunset on Friday evening. 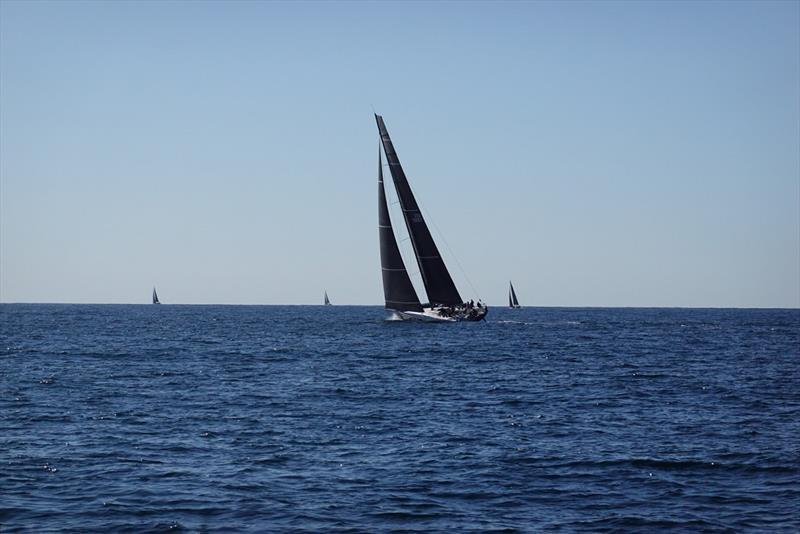 The Islands Race is commonly used as a warm-up race for the rest of the offshore season, including SDYC’s Puerto Vallarta Race every other year. Almost half the fleet for the Islands Race will be returning to the starting line in two weeks for the race down the Mexican coast.

One boat solely focused on the Islands Race, with no other planned races on the calendar, was Jack Jorgensen’s Picosa. Picosa was the winner of the ORR-E class. “We’ve done this race for the past couple of years, so we have some experience which is pretty huge. The race is three legs, Catalina, Catalina to San Clemente, and then the hardest, San Clemente to San Diego. I’ll need to look at the tracker to confirm, but we took a wide approach around San Clemente Island. After we got through the lead we sailed straight to the course, nothing radical. It’s a fun race we do every year, so it was great to get back out there,” he commented. 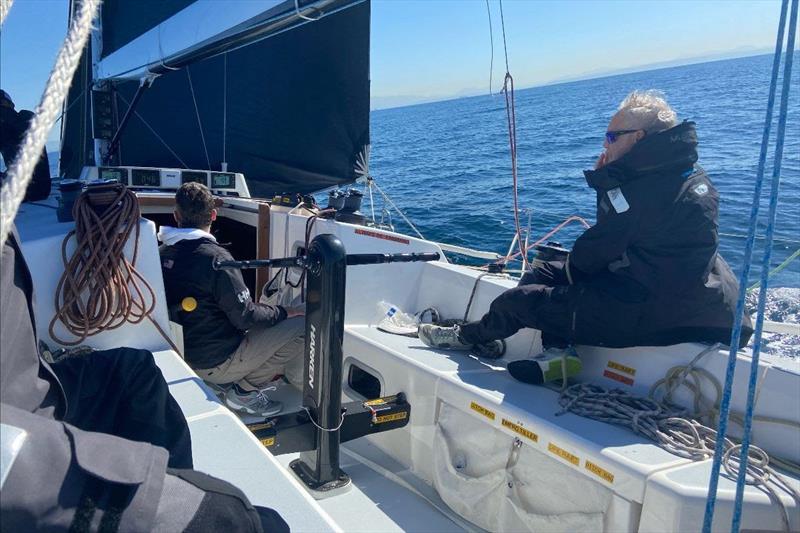 SDYC Waterfront Director Jeff Johnson explained, “Mark #1, Catalina, doesn’t present as much of an issue. San Clemente Island is a military training ground, thus the reason for the restricted zones and virtual marks of the course to keep the fleet well away from the action. It is important for navigators to accurately plot these virtual waypoints and effectively keep the helmsman sailing the fastest course while honoring the virtual marks. There is absolutely no indication if you are sailing into a restricted area, except your YB tracker showing up on the website every fifteen minutes.”

Boats finishing at staggered times through the day means there are no after-parties for the race. However, sailors who stuck around the Club after the racing were invited to participate in the awards ceremony around 1500 this evening.

To look back at the YB Tracker, click here.