Today saw a brief pause in what has been a particularly active race week.

We’re not racing! Evidently the bad weather being served up across France and western Europe is also extending its grip to the Bay of Saint-Tropez.

Race Management wisely took the decision to cancel the day’s races with over 30 knots of SSE’ly breeze sweeping across the edge of the race zone in the bay from midday. The thousand or so competing sailors will have to patiently wait until tomorrow before they can round off the racing in style in what has been a fantastic few days of excellent and contrasting sailing conditions, which have enabled all the boats the chance to really show what they’re made of.

The massive depression that hit Brittany last night is continuing to affect the whole of France and beyond. On its southern face, it’s sweeping along the Mediterranean coast now. Accelerating in the middle of the day, it’s been pumping out over 30 knots of breeze along the edge of the Bay of Saint-Tropez off Nioulargue, where the modern yachts race, and over 25 knots off Les Issambres where the Classic yachts cross tacks. “With over 2.50m waves, we deemed it wiser to keep all the boats in port,” explains Goerges Kohrel, Principal Race Officer. “No racing today then, but we have high hopes of some racing tomorrow. At this point in the event, the Modern boats have already validated three races, and the Classics two. If we race tomorrow, we’ll be able to congratulate ourselves on a fine and very varied week.”

Four-time World Nacra 17 Champion and skipper of the French boat on the Sail GP circuit, Billy Besson is sailing at Les Voiles as part of the highly competitive IRC B group, aboard an Artech 47, Prétexte. In this his debut appearance at the event, the native of Tahiti has had quite an eyeful and makes no bones about it. “As someone who’s used to double figure speeds, I must admit that sailing on a slower monohull is a very joyful discovery. I’m delighted and amazed by the atmosphere at Les Voiles. You really have a laugh at sea, and on shore, and there’s a surprising warmth and sociability. I’ve really got into it. I’m sailing with a group of mates under the leadership of Jérémy Lagarrigue, the owner of the boat, who knows the bay inside out. In fact, he pulled some tactical master strokes out of the bag on the first day. In general, the races are very tactical, with a lot of cut and thrust, close contact and strategy. The start phases are thrilling. I feel a bit like I’m holiday. I’ll definitely be back once the health situation enables me to experience Les Voiles in all her usual glory.”

Sailor Sidney Gavignet, the notable winner of the last Route du Rhum in the Class Rhum, who has gone on to become a personal trainer, is a regular at Les Voiles. “Saint Tropez has regained a certain serenity in the current context. Out on the water, the atmosphere is still just as much fun as ever. Our owner, Oren Nataf has gathered a fine team around him. We’re really enjoying ourselves, especially so during yesterday’s challenge day, with the wind coming from every which way resulting in lots of jockeying for position. Stiren is a very pleasant boat with a yawl rig according to a 1963 Sparkman and Stephens design.” 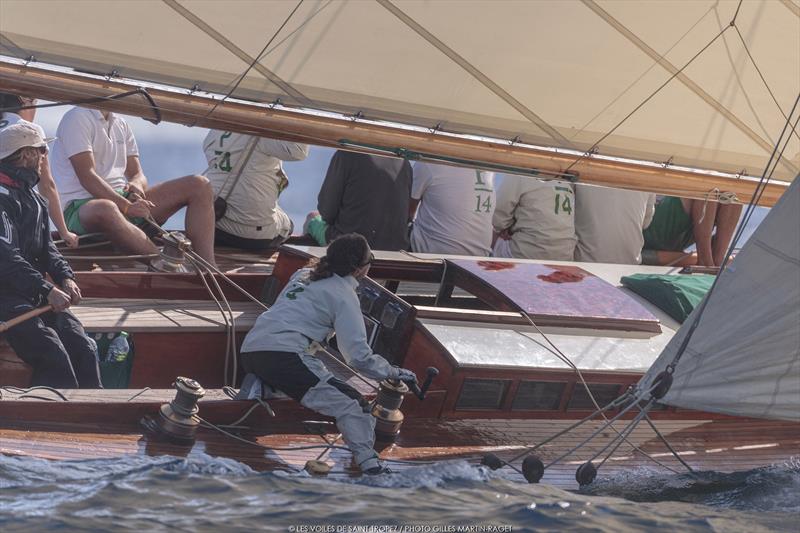 The first week of Les Voiles, dedicated to craft measuring up to around 20 metres from both the Modern and Classic categories, will take place tomorrow, Saturday, in Les Voiles’ race village, near the Harbour Master’s Office, from 19:00 hours. Due to the health situation, the prize-giving for around 130 boats will be invitation only.

A familiar sight at Les Voiles since her extensive (4-year) renovation in 2015, the 10mR Marga is really making life difficult this week for the P Class boats in the Period Gaffer group. Launched in 1910 at the Halstholm yard in Stockholm, she is the work of Swedish naval architect CO Liljegren. Marga participated in the Olympic Games of 1912 in Sweden, where she ranked 4th. Featuring a fairly aggressive form for a 10 Metre boat, Marga is an out and out racing yacht with a highly studied gaff sail plan. She has no winches aboard, all the manœuvres are done using brute force. Her refit was completed after a lengthy period of study and research, her creator CO Liljegren initially devoting his time to the design of super competitive race boats. He was trained by the Master himself, Nathanael Herreshoff.

SUZUKI MARINE and MARSHALL
For the fourth consecutive year, Suzuki Marine is providing support and expertise to the Société Nautique de Saint-Tropez with regards the organisation of Les Voiles. It’s an edition punctuated by the cooperation of Suzuki and its partners, with the rib manufacturer Marshall.
Marshall, a legendary Italian manufacturer, is making its comeback on the French market through an exclusive partnership with Suzuki Marine. Since 2018 and across the whole of Europe, the Marshall craft have been kitted out with the brand’s engines. As such, the Black Pearl, a fabulous 10.25m rib powered by two DF300APX engines is a unique craft developed from specifications detailed by Francis Le Goff, Director of the Normandy Sailing League, who also happens to be the Race Director of La Solitaire du Figaro.
To supervise the 200 classic and modern yachts participating in Les Voiles de Saint-Tropez 2020, no fewer than six Marshall ribs are out on the water. Among these are four 7.8m M6 Touring ribs equipped with a Suzuki DF300BTX engine. Alongside them are two 6.65m M4 Touring ribs, each of which boasts a Suzuki DF150APX engine on their transom. This fleet is also supported by two Marshall M6 and M4s, which the SNST already has at its disposal within the scope of its partnership with the manufacturer.