The outstanding series features footage of the AC75 dismasting, and all other key events for the Italian team, with the team members telling the narrative.

Debut screening on the team channels of the first season of the series ‘Challengers for Now’. The series gives a view behind the scenes of the Cagliari headquarters through exclusive footage and interviews with the team members.

This is a challenge without equal. Lasting 1000 days, involving 100 professionals, with one obsession – winning the America’s Cup and winning it for Italy.

The America’s Cup is the oldest trophy in the sporting world and since 1851 the most talented sailors in the world have been competing against each other to claim it. It is a competition between teams representing their countries in terms of sports, design, technology and culture. “Where winning is almost impossible, but not quite”.

For this reason, it represents one of the most sought-after trophies, and claiming it is a challenge filled with difficulties.

The web series consists of two seasons, with four episodes each, detailing the events that have defined the past year: from adrenalin-fuelled training sessions, to hull and foil development, from tense moments during a dismasting, to the return to training on the water. Viewers can follow the backstage activities on shore and at sea, through exclusive images available to the public for the first time. 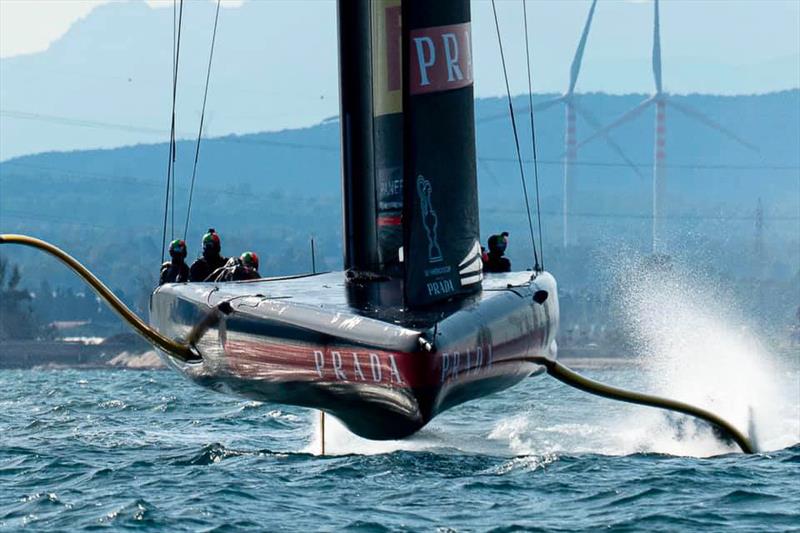 The story of this tricky and arduous journey is told by the sailors and team members, alone and unscripted.

“It’s an obsession” this is the opening of the first episode introducing the team. It shows how the team members are selected, and what it takes for a sailor to face a challenge that will see him committed nonstop for over than three years. And what are the secrets behind a “flying boat”?

The design team reveals these secrets in the second chapter.

The third episode narrates the unexpected, the immeasurable, the occurrences that happen despite the most precise calculations, and that force you to stop and repair the damage done. These are undertakings where every day you push your limits in order to understand them, considering that the margin for error is almost zero – and that time, the real enemy in an America’s Cup campaign, is never enough. Will the team be able to overcome the more unforeseeable obstacles?

We find out in the fourth episode.

Max Sirena (Skipper & Team Director): “Being challengers is what reminds us every day of our goal and pushes us to strive more and more to achieve it. This web series is a project our team really cares about, it is the story of the long journey behind a challenge as complex as the America’s Cup.”

Shannon Falcone (sailing team member): “In an America’s Cup campaign you don’t know what can happen until the end; the only sure thing is that the winning teams are the ones who work together to overcome the daily challenges. I hope this web series will show the public the story behind the long and exhausting preparation for the America’s Cup.”

Romano Battisti (new generation – sailing team member): “The big sporting challenges, as an America’s Cup campaign or Olympic Games, in which I have competed twice, convey strong emotions. I hope these images will be able to inspire future generations to get involved in the world of sports and to achieve their dreams, as happened to me twenty years ago.”

“Challengers for Now”, created in collaboration with the team’s creative partner M&C Saatchi, will continue the story with a second season, to be released after the summer, following the team up to its departure for Auckland.

Between January and February 2021 the Prada Cup will be held in New Zealand. This competition between challengers will select the team that will compete against defender Emirates Team New Zealand in the America’s Cup races of March 2021.

The webseries is available on this link

Chapter 1: What does it take to win the America’s Cup? You need a boat, a team, and a lot of willpower. It’s this need to win that pushes a team to fight all the way to the end. The America’s Cup is a challenge against oneself.

Chapter 2: How do you build a boat that flies? Luna Rossa is an amazing technological object. Not only is it a boat, it is an ongoing challenge in constant evolution. Sailing on her, with her, is a unique feeling, it’s almost like flying.

Chapter 3: Designing a new class means experimenting, pushing limits to the maximum, until you reach the breaking point. But only when you know how far you can push can you understand from where to start again.

Chapter 4: In an America’s Cup campaign time is the most precious commodity, where you have almost no margin for error. Time is also your worst enemy; the team works relentlessly around the clock to optimize every minute it has to be back on the water as quickly as possible. But every day there is a new challenge to be faced.