With clockwork precision, it was at 01 hours 33 minutes and 46 seconds UTC that the Maxi Edmond de Rothschild set sail this Sunday 10 January on a fresh attempt at the Jules Verne Trophy record.

In a NE’ly wind of around twenty knots on manageable seas, the six sailors left the island of Ushant abeam of them and bid a final farewell to Le Créac’h, the iconic lighthouse synonymous with this passage across the line. Having left their base in Lorient a few hours beforehand, just before sunset, Franck Cammas, Charles Caudrelier, Morgan Lagravière, David Boileau, Yann Riou and Erwan Israël had to wait a few hours offshore to absolutely nail their departure slot.

It was a timing of pinpoint precision skilfully calculated with their onshore weather router Marcel van Triest, the boat’s genuine 7th man, because in a record like the Jules Verne Trophy, every minute counts! Indeed, it must be said that with their reference time of 40 days 23 hours and 30 minutes, Francis Joyon and the crew of Idec Sport set the bar very high. To beat the record and become the 10th crew to etch its name on this monument to offshore racing, the men on the Maxi Edmond de Rothschild should be back offshore of the north-west tip of Brittany prior to 20 February at 01 hours 3 minutes and 15 seconds UTC. In the meantime, the crew has nearly 22,000 nautical miles to cover and a high-speed planetary adventure awaits. 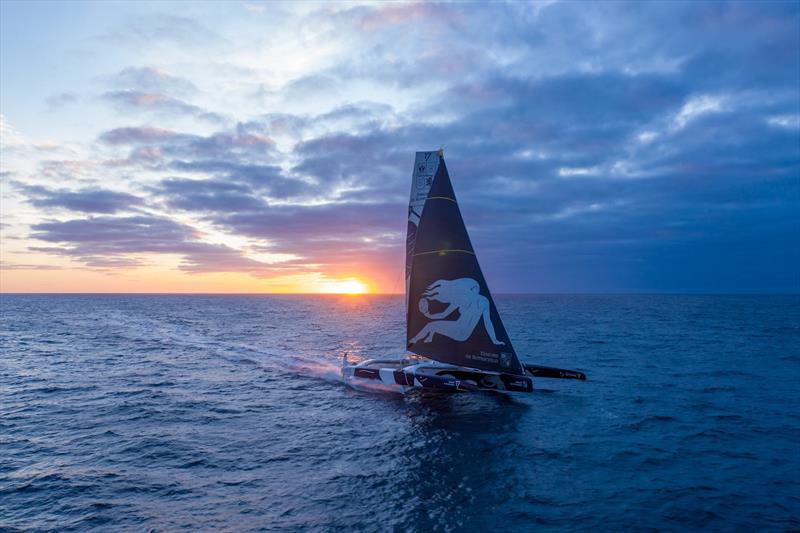 It would seem that moonlit departures are all the rage for the sailors on the Maxi Edmond de Rothschild. On 25 November 2020, for Gitana Team’s first attempt at securing the Jules Verne Trophy, the start line was crossed in the intimacy of a pitch-black night, at 02:26 UTC on the dot. A month and a half on, history is repeating itself. Under the cover of darkness, at 01 hours 33 minutes and 46 seconds UTC, Franck Cammas, Charles Caudrelier and their four crew once again set the stopwatch in motion for this planetary adventure aboard the first maxi-trimaran designed to fly in the open ocean.

It’s worth noting that in late November, the six men had to interrupt their passage down the North Atlantic following damage to the giant’s port rudder and foil after colliding with a UFO (unidentified floating object). Back in Lorient by early December, they were able to count on the reactivity of the shore crew to make a rapid repair and return to standby before the festive season. Since then, everyone has been awaiting the right weather window and in recent days the eagerness to get back out on the racetrack as quickly as possible has been evident.. 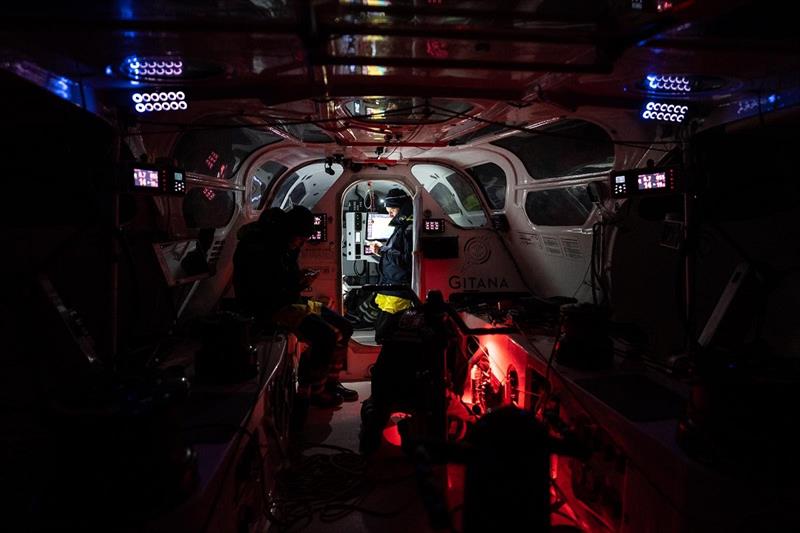 A rapid course and some compromises

“We’ll have a NE’ly breeze of 15-20 knots on the line, with a very manageable sea. However, things will fill out rapidly and the first 24 hours should involve quite a lot of wind and manœuvres, especially around Cape Finisterre, before we can hook up with the trade wind”, explained Franck Cammas briefly. Along the length of the Iberian peninsula, everything will already be about compromise and the crew will have to thread its way along a narrow corridor of breeze to gain southing, whilst ensuring they are neither too close to the coast where the wind could run out of puff, nor too far offshore where they may be subject to heavy seas that do little to benefit speed.

The real difficulty of this start of the Jules Verne Trophy attempt is to try to pinpoint and then get a handle on the highly decisive weather sequence between the north and south so as to get down to the Southern Ocean as quickly as possible. To do this, the Cammas-Caudrelier pairing and their four crew know that they must be precise in their trajectory if they are to keep pace with the tempo set by the weather pattern. According to the latest routing, the passage times for the first third of the course are promising. The equator is accessible within a sub-5-day time and Cape Agulhas could be in their wake in under 12 days. 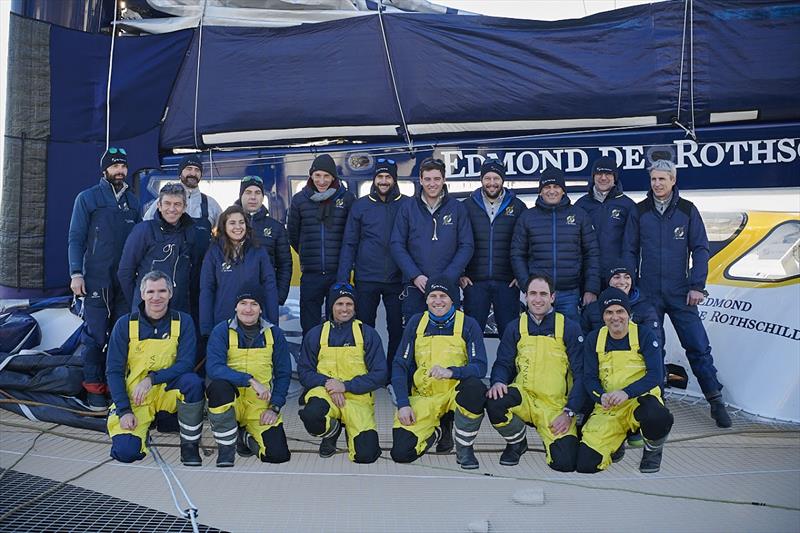 A whole team in their wake

Whilst the Maxi Edmond de Rothschild was preparing to cast off to the applause of a public who had come out in force despite the wintry atmosphere reigning on Saturday afternoon, Cyril Dardashti, the director of Gitana Team, made no secret of his delight: “We’re launching off on our second departure this winter and we’re very happy that this window is opening up to enable the crew to get out on the water and show what they’re made of. It’s been a month since the boat was repaired and we’ve been preparing to snap up a favourable opportunity. Taking on the Jules Verne Trophy is one of the main objectives in our programme. Together with Team Verdier, we devised and designed this boat for this type of major record with the goal of experiencing offshore flight. It’s a real pleasure to truly fulfil the brief. The times planned by Marcel van Triest and the routing are good to both the equator and Cape Agulhas, the crew and the boat are ready to go, so it’s safe to say that we couldn’t ask for more! The guys are keen to get going and our owners, the shore crew and all the associates of the Edmond de Rothschild Group are behind them. For the boat to set sail and pit itself against this fabulous record is just what we were all waiting for!” 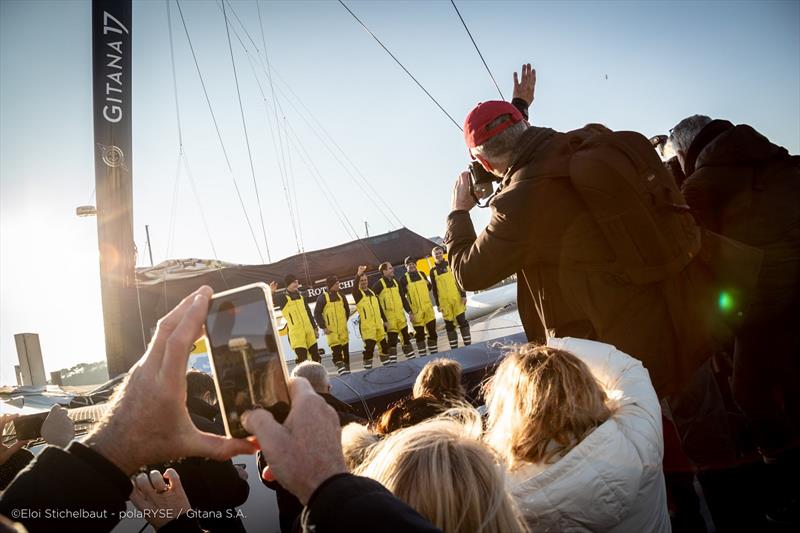 Franck Cammas: “We’re delighted to have this fine window opening ahead of us. It’s our second attempt and we’re approaching it with a great deal more hope than the first. Added to that, the conditions are in our favour for this nocturnal, moonless yet star-studded departure. It’s sure to be chilly, but we’ll very soon hook up with warmer latitudes. Everything’s going to play out very quickly. I hope that we’re going to be successful, even though it’s a lengthy adventure taking shape ahead of the Maxi Edmond de Rothschild’s bows. After the start, we have 24 hours with quite a lot of breeze and some manœuvres, especially around Cape Finisterre, before we hook onto the trade wind. It’s really nice to find ourselves in the thick of the action as a crew. Fingers crossed that we’ll make it back to Brest as soon as possible after fully completing our big lap of the planet.”

Charles Caudrelier: “It was a bit of a long wait. At Christmas, when the window closed back up, we were a bit worried. We could have set sail two or three days ago as the North Atlantic was very good, however the South Atlantic remained very average. We’ve tried to combine the two, which isn’t easy as there is still a degree of uncertainty. Again it’s not perfect, but we’re into January and we’ve rarely had such a good window. Our first attempt had the benefit of enabling us to get out sailing together in some boisterous conditions. Today, we’re more than ready and the team has done a fantastic job with great attention to detail. Beyond the performance element, we’ve made gains in reliability and that is essential for beating this record, which will be very hard to achieve. For the past week, our impatience to get going has become ever greater. We’ve been observing, analysing and shifting the departure slot every day. This will be my third crewed round the world following on from two Volvo Ocean Races, but the first one in record mode. It’s a whole new adventure and I’m delighted to get the opportunity to experience it and I realise just how lucky we are to be able to live out our dreams.”

Yann Riou: “On a personal level, I find this is more pleasant than the first departure; the weather’s good, it’s daytime, there’s a big crowd and our nearest and dearest are here so it’s really lovely to be leaving today. That said, it’s still a bit tough to bid farewell to your family when you set off on a round the world. However, I’m very happy to be stepping aboard this magnificent boat once again. I have a dual role in this Jules Verne Trophy as I’m both a sailor and a media man. Start days, like those related to the intermediate passage times for example, are very busy days. After sending off the departure images to enable you to get a real insight into the passage across the line in the middle of the night, I’ll be able to gradually get into my role as crewman and take up my watches! I cannot wait…”

Erwan Israël: “The Jules Verne Trophy may well be the finest sailing record there is and with it comes the opportunity to sail on some extraordinary boats. I know Franck and Charles very well having competed in the Volvo Ocean Race with them nearly ten years ago. To be sailing with them once again, aboard what is a fine machine for breaking this record, is absolutely brilliant!”

Track the team’s progress via www.gitana-team.com/en