Posted by: YachtBoatNews in Boat News Races & Regatta 31/05/2021 Comments Off on The Ocean Race Europe 134 Views

With two days to go till the first edition of The Ocean Race Europe sets sail from the heart of Sailing Valley in Lorient (13:45hrs local time, Saturday 29 May), Class IMOCA has selected a few choice utterances from the sailors…

“I’ve taken a fair old while to really recover from the Vendée Globe. For a long time, my sleeping pattern involved some very big nights and quite a few siestas, but today I’m doing well. To be honest, it’s good to be getting back into race mode so close to the round the world. It really perks you up. We’re all very keen for it to get going.

It’s amazing to sail in crewed format on the boat I sailed singlehanded in the Vendée Globe and it’s actually very pleasant. The manoeuvring is quick! Our boat has a wide cockpit so it’s fairly well suited to a crew. With regards each person’s roles, we’ve set up a watch system in pairs. In terms of manoeuvring, we’ve only had a little sailing time, so we each gave ourselves a role. I’ll be more of a ‘free electron’ with the navigation and coordination of manoeuvres as I know the boat inside out.

I’m delighted to be getting back into the fray. There are five IMOCAs at the start and though that’s not a lot, we have a quality line-up with a varied course. I think that what appeals to me is the opportunity to have with me my partners, who have provided me with lasting support and are enabling me to have a fairly long-term vision with Advens and LinkedOut. That’s a big driver.” 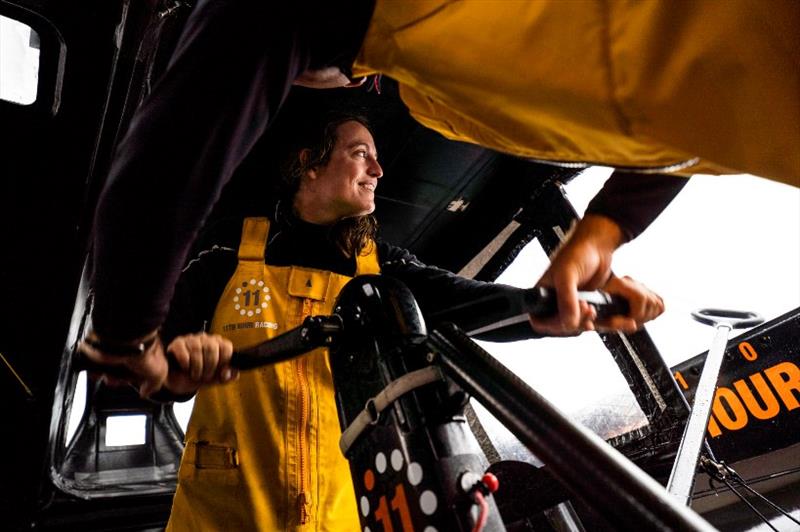 “After the Vendée Globe, there were really three months where I was still a bit lost, but now I have enough energy to get back on a boat like this. When Marcus Hutchinson (Team Manager of LinkedOut) threw me a lifeline by inviting me to join their team for the race, I immediately called up Thomas to accept. I was really tempted to do this race, as well as to discover Thomas’ boat, which is more demanding than the boat I had in the Vendée Globe.

“This encounter is an opportunity to shake things up a bit. With five of us, the rhythm aboard will be more intense, as you take less time to manoeuvre with no dip in the performance of the boat in the meantime. The pressure is shared by everyone and this time I’m not the boss as Thomas is the skipper and he’s responsible for the boat. LinkedOut hasn’t been modified for the race, but she already has a cockpit that’s very well arranged for the crew. We’ve just added two beanbags to the inside for sleeping and we’re trying to find a good way of working so we don’t step on one another.”

“I’m very happy to be back on the water and to be able to get out sailing again. I’ve found it hard to get the brain back into competition mode after the Vendée Globe, but I needed this to get up and running again. The boat arrived in Les Sables d’Olonne in France fairly early on. I’m just discovering crewed sailing on an IMOCA and it’s fair to say that it’s strange. You get jostled about a bit in the manoeuvres as these boats are designed for singlehanded or double-handed sailing. It’s also a good way to improve my English!

“I think the crew’s great as there’s a real mixture of experiences ranging from the Olympic Games to The Ocean Race and the Vendée Globe. Annie Lush is really bringing her experience of the manoeuvres into play whilst my expertise is more related to an IMOCA and navigation. Even though we’ll be the only non-foiling IMOCA in this race, the boat posts a solid performance. I’ve been able to compare it to the various polars from the Vendée Globe and in certain conditions we may be able to manoeuvre well.”

“Returning from the Vendée Globe wasn’t easy, but things quickly got going again with the refit. The days have been full-on for a while now to ensure we’re ready for this race. We’re working flat out! We’re happy to have got the boat back out on the water. We’ve been quick to go out for our first sea trials since she was relaunched. There’s still a fair few things to check before the start, but thanks to having a great team around me, we’ll be ready to go on Saturday.

“We have a fantastic crew with Sébastien Josse, who’ll be doing the Transat Jacques Vabre with me, and also Marie Riou and Benjamin Schwartz, who are bringing their fine racing experience to the plate. We’re all eager for it to start so we can stop with the odd jobs and get out on the water. Inevitably the whole of CORUM Sailing team is delighted to be able to take part in this great event and just getting the chance to compete in this race with a crew is a real pleasure.” 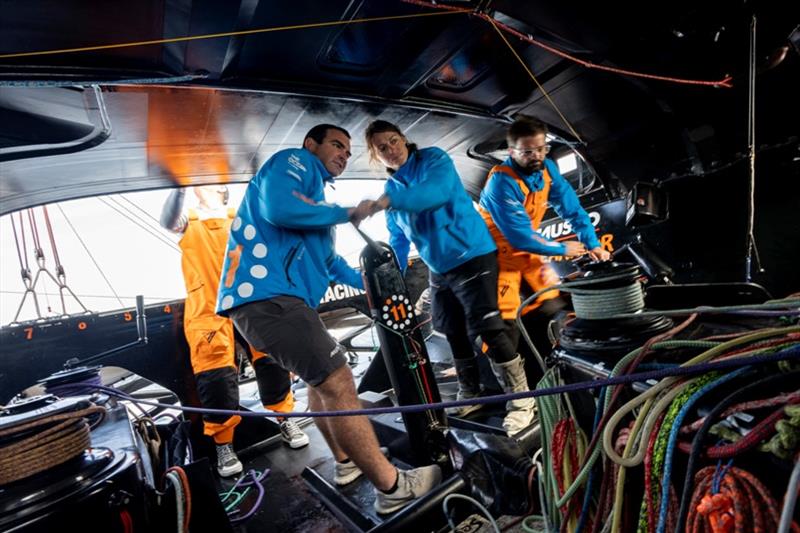 “We finally get to have a race start! For those of us who didn’t do the Vendée Globe, it’s going to be real thrill to rediscover competition. The boat is the one I finished 4th on in the Transat Jacques Vabre 2019 with Charlie (Enright), just ahead of LinkedOut in fact… It’s a boat which has since been used as a tester for the new boat currently in build.

“Several generations of foils have been tested and now we’ve received our new foils, which we’ve been trialling over recent days with other small gadgets and it’s really quite good in terms of performance, stability and use, so we’re fairly content! The boat will compete in the colours of 11th Hour Racing through until this autumn’s Transat Jacques Vabre with Justine and Simon (Fisher) and Charlie and I will soon have the new boat for the double-handed transatlantic. It’ll then go on to compete in next year’s The Ocean Race.

“And what about the autopilot? Well, the better it is, the less we helm because ultimately with four of us, it’s the kind of crew where you’re regularly paired up and it may even be that in a long race like The Ocean Race, there are bound to be phases where you’ll be alone on deck. A lot of work has gone into the autopilots so they perform very well over the distance. It’s also a good way to find the right trim and concentrate on performance.”

“For us, the aim is to succeed in this first clash with this particular crew. We’re going to have to manage the weather variations over the course and quickly find the right trim. We have a team which works well together, who trust one another and when you add the experience of everyone involved, we have a serious haul of skills. I’m stoked at the prospect of doing this race. We’re also doing the return delivery trip together, which will really help the team progress to the next level.” 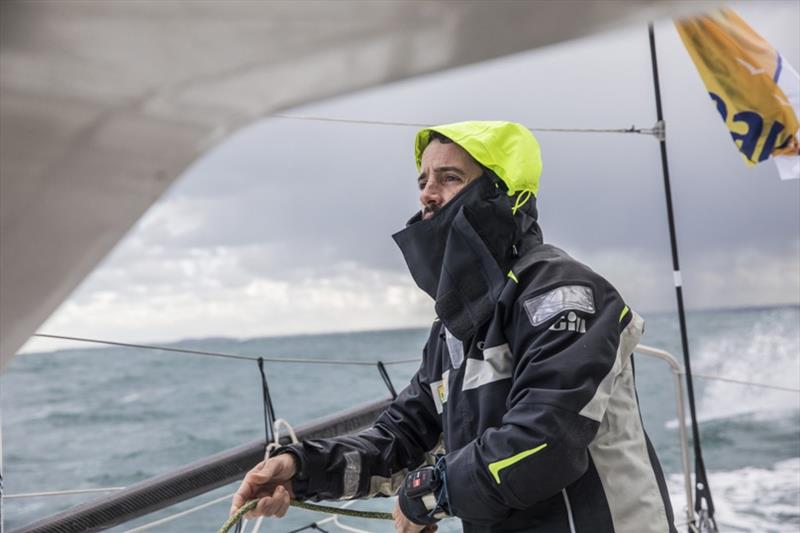 “We’re all very excited to be setting off on this race. We believe that the initiative to reconcile IMOCA and The Ocean Race is incredibly positive, dynamic and intelligent. We realise how lucky we are to be able to set sail on a little tour of Europe. I don’t think it could have been very easy to organise so I’d like to congratulate the organisers! We also realise how lucky we were to have been able to sell our boat to Pip Hare, to purchase this one (ex-L’Occitane en Provence) and then be able to launch her in time thanks to all the team rallying together. Everyone has been working from 8 in the morning till 8 at night, day in day out for over month for this.

“It’s fantastic that there are five IMOCAs at an event so close to the finish of the Vendée Globe. Congratulations to everyone concerned. I believe that over very tactical courses like the one in the Mediterranean, where you have to put in a lot of manoeuvres, the VO65s are sure to give the IMOCAs a run for their money. Even though there are two rankings and two philosophies, it’s still a fleet of 12 boats and it’s going to be thrilling to be a part of and to watch I hope.

“For the skippers who competed in the Vendée Globe, it’s going to be necessary to get into a very active rhythm from the get-go. Inevitably, the crew who come aboard and aren’t familiar with the timing associated with seriously anticipating things, will be the engines and the alarms. It’s not going to be natural or easy for us, as we still have the reflex actions of the Vendée Globe etched on our brains. Our sails are arriving on Wednesday so we’ll throw them onboard and immediately make for Lorient in whatever conditions we have. We are flat-out!”

“We’ve opted for a large crew, firstly because we’ll be finding our feet on the boat so we want to glean as much information as possible so we can work on her in the run-up to the Transat Jacques Vabre. We know that you have to respect the power of the different appendages and for now we don’t yet have much gen on the boat.

“On top of that, we’ve had a project for the past eight years which is called ‘Mer Entreprendre Espoir’. This involves selecting one youngster a year and the aim is to bring them out on the water, encourage them to participate in the major races and then hope it lasts. That’s the case for Arthur Hubert and Clément Comagnac, currently doing a transatlantic passage on a Figaro. And Pip Hare too, because we shared a great deal with her during the purchase of the boat and also because her profile in the Vendée Globe really appealed to us.”

“The battle between VO65 and IMOCA will be fun. Every boat has its advantages. We’ll be able to sail on an equal footing on certain tacks and, aside from when the wind is on the beam, we should be able to bring our ‘A’ game according to the weather.

“I really like the concept of the strict one-design, which reminds me of the Figaro, with the addition of this crew synchronisation element, which has required me to relearn everything. In VO65, we also have three or four experienced crews with skippers like Bouwe Bekking (Sailing Poland), Chris Nicholson (Akzo Nobel) and Simeon Tienpont (Team Childhood). We have four nationalities aboard, with some Anglo-Saxon sailors, some French Figaro sailors, sailors with backgrounds from the Olympics and the Volvo Ocean Race, etc. We have a very interesting mixture of cultures, with a real family-based atmosphere within the team and that’s something I cherish. We’ve trained hard to hunt down victory.”