Speeds are up and the boats are flying south towards the end of the seventh day at sea in the Vendée-Arctique-Les Sables d’Olonne race this morning with Jérémie Beyou back in charge on Charal.

After the extraordinarily close phase of the race during the light airs passage preceding the current depression, the separation between the leading boats has now increased somewhat.

Benefiting from a strong southeasterly airstream, the foilers have been powering southwards and this morning Charal’s bow was flying over the water at over 20 knots of boatspeed.

The triple Figaro winner was just under 590 nautical miles from the Gallimard Waypoint where the course turns to port for the run back to the finish at Les Sables d’Olonne.

The ranking is still influenced by the calculations of distance to go to the finish – favouring boats on the eastern side of the course – as much as position on the water, with Kévin Escoffier’s PRB listed as in second place five miles behind Beyou but he is also more than 30 miles northeast of him.

Third on the leaderboard is Thomas Ruyant on LinkedOut (+6.8), 15 miles to leeward of Beyou and looking good for that position, while former leader Charlie Dalin on Apivia is shown in 6th position (+13.2), another seven-and-a-half miles to leeward of Ruyant.

The other boats in the leading group are Boris Herrmann’s SeaExplorer-YC de Monaco in fourth place (+7.9) and Sam Davies’s Initiatives-Coeur in fifth place (+12.4). The tracker was showing Herrmann – who had been leading for much of the light airs phase – running off downwind this morning.

The route to the Gallimard Waypoint looks anything but straightforward with the breeze heading the leading boats and with more lightwind sections still to come which could compress the fleet once again. As several skippers have remarked, this race has felt more like a Figaro-style contest or even a giant round-the-cans sprint than a warm-up for the greatest solo race of them all – the Vendée Globe.

Isabelle Joschke, the Franco-German skipper of MACSF, is on her own in seventh position (+30.8), and then there is another group of six boats to the northeast of the leaders headed by Yannick Besthaven on Maître Coq (+36), followed by Clarisse Crémer on Banque Populaire X (+53), then Fabrice Amadeo on Newrest-Art et Fenêtres (+59), Kojiro Shiraishi on DMG Mori Global One (+61), and then Italian skipper Giancarlo Pedote on Prysmian Group (+64). The most easterly of those boats, but also the most northerly, is Maxime Sorel’s V&B Mayenne which is listed in tenth position (+58).

When this race started most of the skippers were talking about sailing within their capabilities and using the course to check and test equipment and systems, with a focus on reliability and just getting into an offshore rhythm in preparation for the Vendée Globe in November. Charlie Dalin apart, few of them talked about the competitive side of it. However the strong racing instinct in the skippers of the IMOCA class has taken over out on the water and we have been watching a thrilling spectacle, that has been far tighter than most long distance races of this nature.

In the course of a week at sea, we have seen the lead change hands on a regular basis and already at least five skippers have held the initiative. The question now is, who will master the meteorological transitions and boat management challenges best over the course of the remaining 1,150 miles to the finish at Les Sables D’Olonne?

At 07.25 utc Boris Herrmann on Seaexplorer – Yacht Club de Monaco had an issue onboard. The main headboard car broke and the main came down. Boris is fine and needs no assistance but he will be slower for the rest of the race. He has secured everything and at the moment is still sailing with the head sail and a much smaller main. He is trying to fix the issue with spares we have on board and he aims to continue the race but he will be much slower. The race management have been notified and are monitoring the situation. 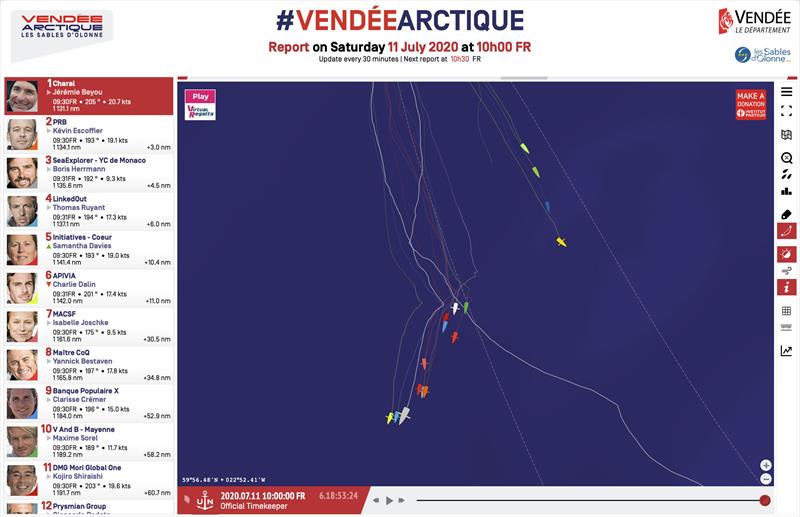