Having been slowed since around 1800hrs UTC yesterday evening to evaluate and then today to make some kind of repair to his port side foil system of APIVIA, Charlie Dalin has dropped to third and lost over 120 miles to his two nearest rivals, Thomas Ruyant and Yannick Bestaven.

But Dalin, Vendée Globe leader for 23 days up until last night, appears to be back in race mode this afternoon, making over 14kts south eastwards towards the south Pacific Ocean.

His team have so far only shared scant details about the problem, saying only that the damage is not thought to have been caused by a collision with an object.

Dalin’s communication said “The port foil remains whole. The damage is to the lower support, where the foil rests as it leaves the boat. Charlie has therefore been focusing on strengthening the foil attachment to make sure the casing remains secure.”

Meanwhile Ruyant, who himself has no working port foil on LinkedOut, has taken over the race lead again with a small margin of around 10 miles over Bestaven’s Maître CoQ as the leading group broad reach south eastwards towards the Antarctic Exclusion Zone before gybing to parallel the ice boundary and accelerate into the Pacific Ocean later tomorrow or Thursday. 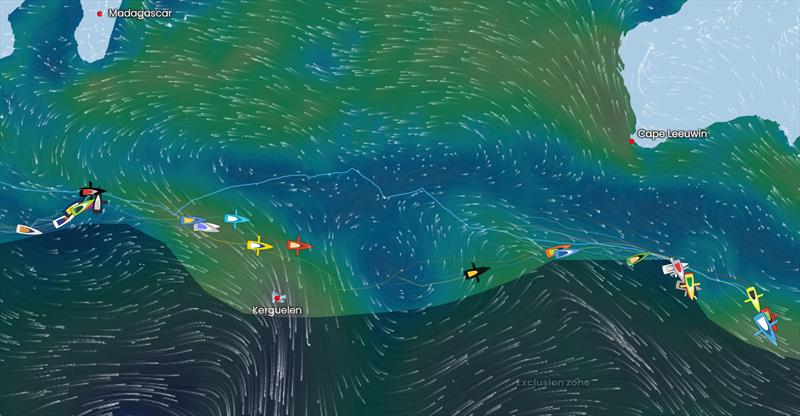 Over three hundred miles behind the leading trio, after 36 days and very nearly half of the 24,410 nautical miles course, five IMOCAs are racing within sight of each other in high pressure conditions more akin to the Mediterranean than 47 degrees south, some 1000 miles south of Adelaide, Australia.

Herrmann enthused, “It has been such an amazing day, I really had to jump on my pilot to not crash into Damien, we were kind of converging like magnets pulling the boats one to each other. Of course, we were observing for a long time but I really didn’t want to touch my pilot because my boat was on the perfect set up for going fast. Now, I can see 4 lights around in the total darkness, and this is pretty amazing, 5 boats inside half way around – this has never happened before! I was so close to Damian that I could talk to him boat to boat and look closely inside his cockpit and so on…And then we also chatted on WhatsApp.. it’s really nice – no more loneliness. My dream day! It was warm… part of the day I was working outside without a jacket: I made the stern of the boat my workbench and I was playing with the grinder and the drill and this and that… and gluing the sail back together. A really fun day for a change! With distractions and nice things to do. The boat was going nicely by itself while I was working! Still a bit to overtake them but let’s see how tonight goes. Not sure what happens with Apivia, seems like he has a problem with the foil case… but yeah, the Vendée Globe is always good for surprises! Like Francis Joyon says “Tu n’es jamais à l’abri d’une bonne surprise” = “today was really a nice surprise day”: warm and quiet. Gentle in any sense.” Watch the video HERE Herrmann’s objective for the day, to work through his job list while the benevolent conditions prevailed, was mirrored elsewhere in the fleet, although some jobs were achieved through sheer necessity rather than because of the conditions. Yannick Bestaven was ecstatic to have climbed his mast and patched his J2 headsail leech to make his workhorse sail serviceable again before the Pacific and therefore render his Maître CoQ back to 100% efficiency again. 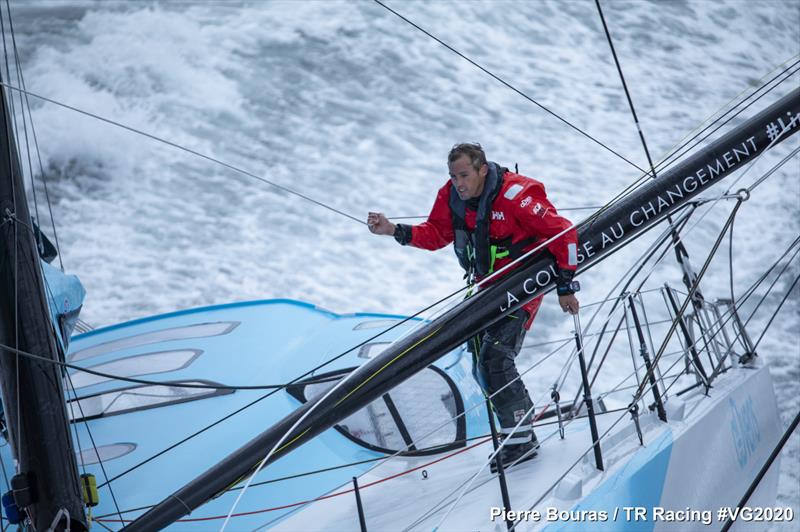 Bestaven said this morning “It is good for our little group as we never stopped. We’re going to get wind as we advance and we we’ll get more wind along the ice exclusion zone limit. We’re going to continue to build the gap on the group behind; that’s the aim. I had seen that the area of light pressure was catching up with us, that’s why I used the little gennaker, a bit on the limit, it wasn’t comfortable, and I had to be careful. I had to follow so as not to be caught up in the light patch with no wind behind. I did not know about Charlie (Dalin) but I could see he was slowing down. I’m not surprised! They are faster boats; they should have better averages than me. I suspected he had a problem, but I think Thomas (Ruyant) is doing well anyway. My foils aren’t very big, but they are strong!”

Further back in 11th place Maxime Sorel’s J2 repair was less than easy on board V and B – Mayenne. He had been working round the clock since yesterday. “I’m burnt out, I’ve just spent nine hours non-stop repairing my J2 (one of his headsails). I don’t have any hands left! I’ve repaired four metres of it. I started at 10pm GMT and finished at 7.30am. My only breaks were for gybes along the Ice Exclusion Zone. I did this listening to music and with lots of elbow grease! I slept for an hour and will sleep another hour before I take the sail out. It’s very stiff, all 100m2 of it. It takes up the whole boat! Once the sail is out, I’ll have to rig it on the cable. Then I’ll have to go back up to the mast to attach it. Given the state of the sea, I’ll have to do it now because the conditions won’t be so good afterwards.”

“Right now, it looks like the South Atlantic, it’s pretty cool. When I climbed the mast, I couldn’t understand the state of the sea: we’ve been sailing on rough seas for ten days now. As the sea conditions had improved, I had the impression that it was OK. But once I got to the top, it wasn’t so good! Now though it’s going a lot better, I’m going to take advantage of it. I listened to an evening playlist while tinkering about, I had the Fugees playing, a bit of everything really. I had enough hours to play the playlist several times!” Conclude Maxime.

“Mentally, it’s going pretty well. I’m settling more and more into my race, I’m feeling better and better. Technically, the last three days have been complicated: I had some problems with my gennaker furling system. I had to do some real acrobatics at the front to hoist and lower the sails. Physically, I get tired quickly when there is a difficult manoeuvre. And I get cold quickly… I need to sleep. I am making the most of the calmer weather to take a long trip around the boat, to check, repair… I’m not bored.

One important point to note is that I need to allow more time for myself. Really, from the very beginning of the race I have needed this, but it’s impossible. Either I have a cascade of problems or the wind calms down and I throw myself on my ‘To Do’ list of repairs. Or there is a lot of wind, so you have to be on it. I have to find a way to give myself some time. I can’t find my Kindle, but anyway, I don’t know how I could have found the time to read!

I need to get away from it all and the irony is that I have reduced energy because I have a broken hydro. Which means it’s not possible to distract myself with listening to music or watching videos. And my Kindle, which I normally always have with me, I can’t find anywhere. The other day I did some meditation, which works well for me. It’s probably what I should do a little more.

In this race, there are moments when things are on the up, on the competition side of things it’s going well, and then ” badaboom “, there’s something wrong and you have to fix it. It’s hard to gauge. I have been very lucky to be able to get back into the fleet, that’s what really motivates me and that’s why I am in attacking mode. In the race, it speeds up, it stops, it starts again, it stops again! I have to adapt. It’s better compared to the beginning of the race. If something breaks on board, I know that in the rankings I will lose some ground, but I also know that I can come back up again, so it affects me a little less.

Earlier, I aired the boat’s forward sail locker, the fresh sea air did a lot of good to the enclosed and wet air inside. The boat is totally enclosed. Since Kevin (Escoffier) sank, I have closed all the hatches. I felt that my boat needed to breathe, a bit like me! You have to keep the heat inside, so it’s very confined. So, when I come out, I breathe!”

“I am writing this just after dawn on what I think is a typically white, cold dank morning in this part of the Indian Ocean. I am cold, my clothes are all damp, my hair is matted and when I woke up this morning I had the imprint of the foam matting on my face where I had eventually fallen asleep on the floor.”