With less than 200 nautical miles to make to cross the longitude of the Cape Leeuwin, Charlie Dalin’s lead on the Vendée Globe fleet is a much more tenable 81 nautical miles after long periods slowed in light winds during the last three days of racing.

Quizzed early this morning he denied he has any technical issues on board his IMOCA APIVIA:

The leader’s elapsed time to Cape Leeuwin should be of the order of 34 half days, nearly six days outside of the outstanding record set on the last edition by Armel Le Cléac’h at 28 days 20 hours and 12 minutes. Le Cléac’h’s passage time back in December 2016 beat the previous record by 5 days and 14 hours.

But while the last two editions of the Vendée Globe had already been distilled down to head-to-head match races, this ninth edition is a much more open affair.

In 2012-2013 at Cape Leeuwin there were five hours and 49 minutes between the runaway duo Le Cléac’h and Francois Gabart. Alex Thomson was over one day and three hours behind.

And in December 2016 there were five hours and 16 minutes between Le Cléac’h and Thomson.

Today there are less than 100 nautical miles between leader Dalin, second placed Thomas Ruyant (LinkedOut) and third placed Yannick Bestaven (Maître Coq IV). Jean Le Cam (Yes We Cam!) is 130 miles behind Bestaven and he in turn has three skippers, Damien Seguin, Louis Burton and Benjamin Dutreux, all within 40 miles.

And at current speeds there is less than a day or just over 400 miles between first and 10th.

Louis Burton, who a matter of a week ago was in second, 140 miles behind leader Dalin, admitted today that his problems are more than just the autopilot issues which he detailed a few days ago. The skipper of Bureau Vallée 2 has dropped to sixth, now 246 miles behind leader APIVIA. He revealed that he has damage to his mainsail lock (hook) and to the upper part of his mast track to the point that the maximum hoist he can use the mainsail to is with one reef.

He explained, “I still have the J2 which is working fine, but the small gennaker is in bad shape so I don’t have a lot of headsails. I also have energy problems which are holding me back quite a bit. I’ve got a hydrogenerator stuck down which actually slows it down a lot, but I don’t have much choice since I don’t have enough fuel to finish the rest of the race using my engine (to generate power). That’s an extra worry. The problem with my pilot is fixed, and I’ve tried to make sure all those little fragile sensors are now watertight so that the problem doesn’t come back.”

Burton spoke of his 2016-17 race on which he finished seventh: “Compared to the last Vendée Globe, there is less wind, and the sea is calmer. But in saying that up until this point, the conditions have really been boat-breaking. Four years ago, when we passed through this zone, there were really high seas and the wind was much stronger, but there’d been more extensive weather systems, so fewer manoeuvres to make and therefore less danger for the boats. This time round, it’s really not been easy to manage. We’re now going to enter a zone that will be less wind between the Indian Ocean and the Pacific. It’s not the Big South as I like to imagine with the usual big depressions on which you can stay a long time. Instead, the conditions are very changeable and very trying, which also explains why the boats are coming back from behind. ” 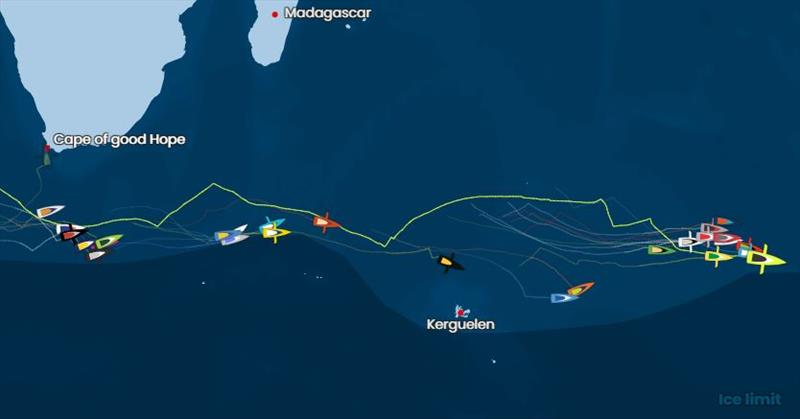 Good for hope, good for morale

The Finnish airline pilot Ari Huusela was the final Vendée Globe competitor to cross the longitude of the Cape of Good Hope today, 33 days and 22 hours after the start off Les Sables d’Olonne on Sunday 8th November. That he was some ten hours and eight minutes behind Sébastien Destremau mattered not at all to the 58 year old from Helsinki.

Indeed, he may be the 29th racer to cross but it is doubtful if any of the 29 ahead of him have been happier to cross this first of the course’s three Great Capes. He is on the threshold to the Indian Ocean on STARK, his Owen Clarke designed IMOCA which already has two racing circumnavigations under its keel, and that represents a big leap into the unknown for Huusela who has been planning his Vendée Globe for the best part of twenty years, and is in no hurry to have it finish any quicker than he would like it to.

“It feels so good to be passing this first Great Cape. It feels so good. It has been a lot of years coming since we started this project and so it feels really good. I am relieved. Next is Cape Leeuwin in two to three weeks. I am so, so happy today,” smiled Huusela, one of the three skippers in this race who might strictly be described as amateurs, that is to say deriving their primary income from outside of sailing, along with Didac Costa who is a full-time fire officer and Manuel Cousin who had a career in the automotive industry with Toyota.

Crossing Good Hope just ten and a half hours earlier than Huusela was Jérémie Beyou. The skipper of Charal who restarted again nine days after the original start was pleased to reach one of the little targets he had set himself, to be catching up with the back of the fleet by the Cape of Good Hope.

Beyou, whose passage to the Cape has not been easy as neither the North Atlantic nor the South Atlantic have been kind to him. His elapsed time is 24 days 9 hours and 14 minutes, 15th fastest of the fleet.

“It is not so much about passing competitors now which finally feels good but more just to have got back in touch with the race, to have made up the miles I was behind (1250 leaving from Les Sables d’Olonne on November 17), but at least now I am in the same weather system as others and I have people around me as I head into the Big South. I wanted to be here, catching the race by Good Hope and so I have done that and I’m happy.”

See the ranking in full