With nothing more than a handful of small miles separating them, the leaders of the Vendée Globe are engaged on a straight head-to-head speed test which may yet prove decisive, and which may finally show the ultimate value of a fully functioning latest generation foil package.

In what is likely to be a close reaching then reaching drag race up the Brazilian coast past Recife, 600 miles to the north of leader Charlie Dalin (Apivia), the actual speed potential – the combination of a working foil and J2 headsail – could deliver the key advantage which might then be carried into a North Atlantic sprint finish that presently looks relatively fast and straightforward.

Dalin, from his position about 60 miles to the East of Yannick Bestaven, has managed to eke out a gain to be 10 miles ahead Maître CoQ IV, sailing a faster angle with slightly more wind pressure. Louis Burton is holding steady in third at 23 miles behind. 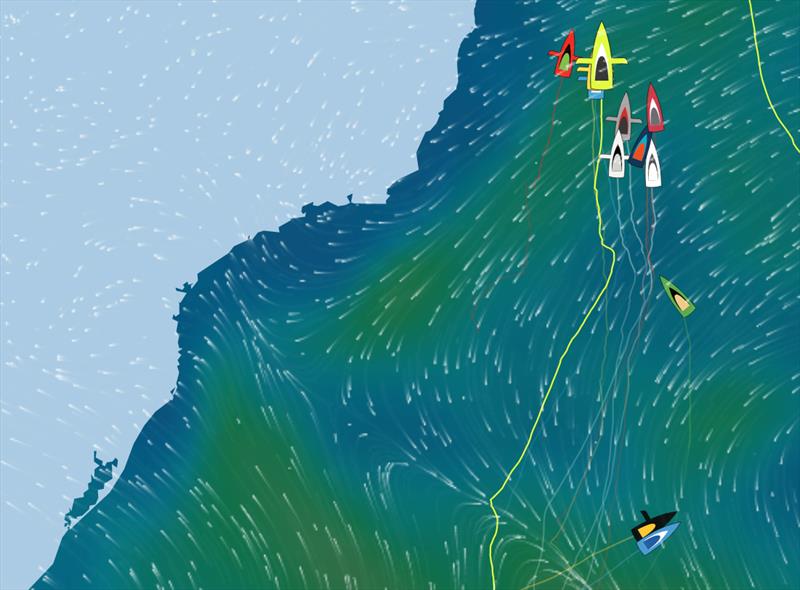 In terms of the various packages Maître CoQ IV has smaller less powerful foils as does Burton on Bureau Vallée 2. It is not completely clear if Dalin’s port side foil is compromised because of his repair to the box bearing. In fourth Thomas Ruyant has a truncated foil and lacks power. And already sixth place Boris Herrmann with big, new generation foils fitted to his 2016-17 boat is pulling back miles on Damien Seguin’s Groupe APICIL, first daggerboard boat which is tracking furthest to the East.

Speaking of what he considers to be his potential Boris Herrmann said early this afternoon, “I am normally a humble person but here I would say in theory our boat should have the best potential for the next eight days on starboard tack where I have a proper full port side foil, which should be better and more efficient than Louis Burton and Maître CoQ IV. I suppose, I don’t know how Apivia will go, it may be the fastest but we have really good potential in this boat, but it is now really in the hands of the weather scenario as well, how much the bungee stretches out and in what sequence and if we find the wind to use the foil and when. If it is 11-12kts and 13-14kts then we are onto the foil and can zoom up to the others.”

IMOCA Class president Antoine Mermod gave his own evaluation on the English Live show today, declaring the game wide open, “It is hard to know what the real state of each boat is. It is sure you need to have the best package for the next eight days on starboard tack, that means a good foil working well and a J2 (main genoa headsail) working well. I think for Thomas Ruyant we know he can’t use it and then I think it will be painful for him. And for Maître CoQ IV close to the lead he is ready to do well but with a small foil but with a good overall package. And from that point of view Boris with big foils and a J2 is in a good position. Remember that a one or two knot speed differential over 24 hours represents a big gain in this context.”

And while it is mostly going to be a speed race in the trade winds to the Doldrums at least, closer to the Brasilian coast there is more potential for disruptive rain squalls and also lighter spells of wind especially at night and in the early morning. This may especially be the case close in to Recife. But in the North Atlantic there seems to be the potential reward of a low pressure system for the leaders to hook into fast SW’ly winds which might offer a record paced passage from the equator to Les Sables d’Olonne.

Surveying the sunshine, the light trade winds the closeness of the fleet and the intensity of the race to the finish, Herrman smiled. “It’s kind of the same sailing conditions as when we train in Port-La-Forêt. The sea is flat, the wind is light, I have the impression of being in Brittany.”

He added, “Yesterday evening my routing with the GFS (American weather model) shows us getting to Les Sables d’Olonne in 13 days. Whatever it is, that is good for morale.” According to Vendée Globe weather consultant Christian Dumard although there have been long sections of what would be considered atypical weather on this race – not least a complicated descent into the Roaring 40s and a long spell of light weather in the Pacific – it appears the North Atlantic might finally deliver a climb back to France direct from the roadbooks, the NE’ly trades transitioning straight to a low pressure system.

Dumard concludes, “We could be looking at long starboard tack in the NE’ly trade winds up to the Canaries, a depression to hang on and a good SW’ly flow to reach Les Sables d’Olonne. It could be quick… ”

At 1303hrs this afternoon the skipper of Time for Oceans passed Cape Horn, a blessed release for a skipper who had to retire from the last race with a broken mast and who had four days of very stormy conditions this past week. So too for Didac Costa, the Catalan fire fighter who passed at 1602hrs UTC this afternoon in 19th place, his third time racing. And Japanese racer Kojiro Shiraishi should pass this evening for his fourth rounding.

Damien Seguin, Grupe Alpicil: “A few hours ago I was passing by Rio, and that of course took me back to our wonderful experience there 4 years ago with the Paralympic French team at the Rio Games, it was a really great moment, it was super. It has lived up to my expectations, in terms of what I was hoping for, the different emotions I’ve felt, the fighting spirit and commitment that is needed to stick it out. I’m really enjoying it even though it’s not always easy of course. You know I was a fighter back in the Paralympic formats of the sport, but I’m finding I am an equally strong fighter on longer formats of sailing like this. So yes, I’ve adapted, I’m loving it, and super happy to be here.”

Isabelle Joshke, MACSF: It’s going a lot better now, it’s calmer, it was really tense for 2 days, but now there’s sunshine, there’s some respite. But there’s still some water getting in. Until I touch land, I won’t be 100% out of danger. I’m still figuring out where I’m going to head to. For the moment it will be either Rio de Janeiro or Salvador in Bahia, depending on what will be the easiest route. I’ve received lots of messages of support, not only since my retirement from the race, but also during my race itself, loads of messages of encouragement.”