Racing some 35 miles off the NE corner of Brasil, at Recife this afternoon, speeds remain very even between the top trio of Vendée Globe boats, German skipper Boris Herrmann having moved into third place overnight.

The skipper of SeaExplorer-Yacht Club de Monaco has modulated his attack with the same patience and diligence that has ensured that he is playing with a full deck of cards, racing an uncompromised IMOCA 60 at very close to 100 per cent of its potential after he carefully protected it during a very tough month in the Southern Oceans. The German ocean racer rounded Cape Horn in tenth with a deficit of 805 nautical miles on the leader Yannick Bestaven.

Herrmann, the 37 year old skipper from Hamburg, has become a household name in Germany, his race being featured on main national news channels each evening in his home country that has no history at all of solo ocean racing. He has made steady inroads into the margins which French duo Louis Burton in second and Charlie Dalin, the leader have built in recent days. Herrmann has been slightly quicker thanks in no small part to the power of his big, 2020 generation foil set which he fitted to the Seaexplorer Yacht Club de Monaco in March last year, and his choice to stay slightly east – offshore – where the moderate easterly trade wind has been more even and consistent. 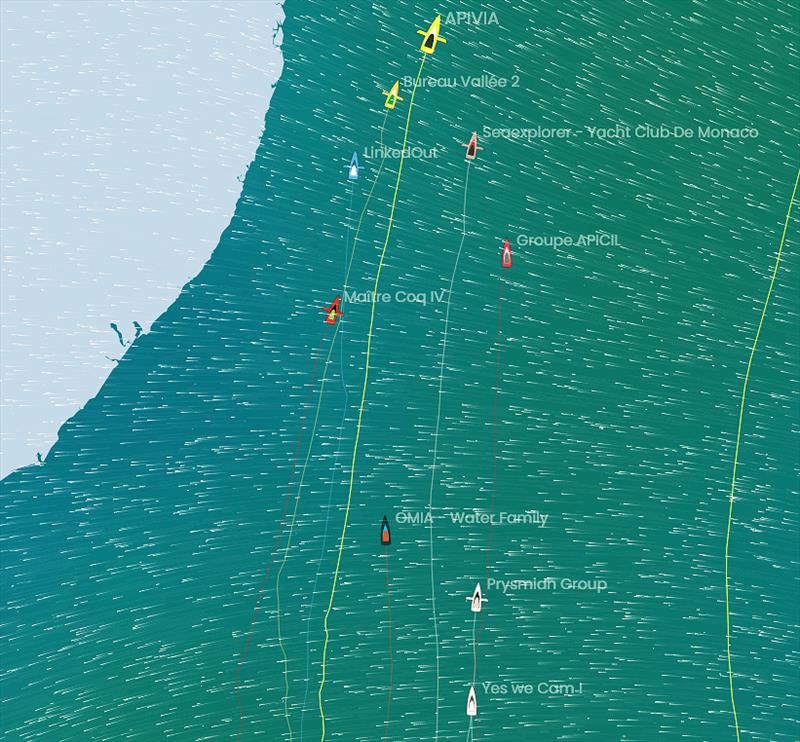 British Figaro solo racer Will Harris, Herrmann’s co-skipper on the Transat Jacques Vabre 2019 and a member of his race team, believes he can keep making small gains, “I think he is going well, mostly as fast as Charlie at least and Louis. I think Thomas Ruyant (in fourth) is struggling a bit more now for pace and Boris is well positioned.” Harris observed this Friday afternoon.

Herrmann has made 60 miles back on leader Dalin since yesterday (Thursday) morning and while the gains have stabilised meantime, Harris believes these small incremental gains should continue.

But Harris, who was a meteo expert on the last Ocean Race, agrees that the race will not be decided in the coming days, agreeing with Herrmann’s belief expressed on the Vendée Globe Live show today.

“I think the race will be decided in the North Atlantic weather systems and especially whoever gets to a cold front we are seeing at The Azores around the 23rd January. ” Harris notes, “They will probably see a fair bit of wind there and so it will be quite fast to the finish but it will be mostly downwind and so quite exciting. But until then it is very much a speed race after The Doldrums in the NE’ly trade winds, a week in the trade winds it will be small gains and losses in terms of boat speed.”

He adds “Boris does look to be in quite good shape, he has been consistently gaining miles and we do see him pushing harder now, he is in a good place. If he can keep gaining the same amount of miles then over a few days that can mount up nicely.”

“Boris definitely handled the South well.” Harris says, “He always had a bit less sail area than the others and there were plenty of us saying ‘come on Boris, push it harder’ but the benefit is now, he sailed smart and safely and is in good shape. It is not so much a Figaro race now in the sense that the Figaro really is about all or nothing for relatively short periods of time. The Vendée Globe is very much about planning and knowing how you want to be at 40 days at 60 days and then being able to step the game up and that has been Boris strategy all along. And so I think he is in good shape and when we watch on the dashboard we can see he is pressing harder progressively.”

Previous leader Yannick Bestaven (Maître CoQ IV) is now sixth at 105 miles behind leader Dalin. In fifth Damien Seguin (Groupe Apicil) is very much in the match at 60 miles from Dalin and just behind Herrmann’s windward hip, but with his older – daggerboard design – is not able to match the foilers’ speeds, making around 1.5 to 2 knots slower.

Isabelle Joschke who was forced out of the race on the 10th January when her canting keel retaining system failed on MACSF is in moderate wind conditions, sailing in safe mode at 1,000 miles from Salvador de Bahia, Brazil.

“The next week is looking head scratchingly difficult and which ever way I go there will be challenges; strong winds, no wind. I am nervous to make the right navigational decision and no matter how much I stare at the screen, plotting my theoretical routes to the east and the west, no magic pathway is appearing before me. My computer screen is bright with colour from the many routes I have generated, manipulating the data to send me one way or the other. One thing to remember is that my software does not care about me, it would send me through the most hideous conditions if it thought it would be quick.

“At this stage in the race more than ever i need to think about eliminating risk, preserving myself and the boat and back off from my competitive nature a bit to look at the long goal. This morning it has become pretty clear that my strategy for the next couple of days needs to be to sail safe and smart, not to go chasing after boats i should not be with on the race track anyway.”

Didac Costa, One Planet One Ocean:

“Now I hope that the storms will pass. The weather is a bit complicated for these 2 or 3 days. I’m approaching a storm that I won’t be able to avoid, I’ll pass it practically in the centre, and then I’ll be able to go East but with another squall coming from Uruguay. It will be a bit complicated and I hope it will be the last one in the South because I am already tired of dealing with so much wind. When I passed the Falkland Islands the sea was calm and now it is increasing. I have waves from the Southwest (SW) of about two meters, but they will grow with the wind up to three and a half meters.

“I have been in contact with Stéphane (Le Diriason) and we have talked about our time at Cape Horn and how the conditions are going to be for the next few days.

I’m starting to think about the finish, about finishing the race, but I’m trying not to think about it too much. I calculate that from Cape Horn to the finish line there is about four weeks, but right now I am only thinking about getting through these two storms and then reaching the Trade Winds. My time to Cape Horn was 66 days and was very good, much less days than last time and if everything goes well I could reach Les Sables in less than 100 days, which would be very good for me.”