With less than two weeks – perhaps even just ten days – until the finish of what is set to be the closest ever edition of the Vendée Globe it is still impossible to predict which three skippers will finish on the podium.

“To be honest we wont really have a decent idea until the first ones get to the entrance to the Bay of Biscay at La Coruña,” warned Jacques Caraës, Race Director this morning. Race veteran Jean Le Cam (Yes We Cam!), 61, in ninth place on his fifth Vendée Globe observed sagely, “I don’t make forecasts. We are always being asked to predict what we can’t predict. This story does not end until the finish line.”

Emerging from the Doldrums first Charlie Dalin (Apivia) and Louis Burton (Bureau Vallée 2) are taking slightly different options. Dalin may be computed to be 48 nautical miles closer to the finish than rival Burton but the skipper from Saint Malo is sailing over three knots faster and is actually more north than Dalin but is making a lower, faster angle and so diverging to the west. Their lateral west east separation is already 110 miles.

The speed race 800 miles northwestwards is towards the point where they each think it fastest and easiest to cross a high pressure ridge of light winds to connect with a North Atlantic’s winter low pressure arriving from Newfoundland.

The leading two contenders have entirely different programmes. Dalin is backed by insurance brand Apivia, part of the MACIF group which already won the Vendée Globe in their own colours with François Gabart in 2012-13. Gabart’s MerConcept company manages the project and as well as Gabart in his corner, Dalin has the counsel of Volvo Ocean Race winning navigator Pascal Bidégorry and a pool of top engineers and designers. He was hand picked as a Vendée Globe successor to Gabart for his record as two times French offshore champion with four consecutive podiums on the Figaro circuit to his credit.

But for all that the meticulous, super consistent Dalin has been feted in one of France’s best funded, top ocean racing stables, he has sailed more than his share hard miles and as young naval architecture student in England raced in the IRC fleet with the Bear of Britain training group. He became close friends with English ex Mini Class Racer and adventurer Nick Bubb who connected with race leader Dalin on today’s Vendée Globe Live show,

Bubb noted, “Back in 2002 Charlie was one of the youngsters who helped out anyone he could in the Mini fleet just to get a bit more experience. The first time we sailed together he was still super young and it was a four day delivery back from La Rochelle to the UK and the deal was he could skipper the trip, as long as he’d only speak French to me. Then he helped work with me on the build of the Class 40 I sailed the Route du Rhum on then and we sailed her back from the Azores together in what turned out to be a pretty heinous trip. It was late December on a fast moving low pressure sweeping across the Atlantic and Charlie was absolutely rock solid. I knew then he had it. His threshold for not only surviving big conditions but revelling in them was super high. A few years later he asked me to race the Mini Fastnet with him. I’d done about six or seven of them by then. We finished fourth. He had a pretty old boat, I thought we’d done well he just always wanted more. Later that year he won the 2nd leg of the Mini Transat and he never looked back after that.” 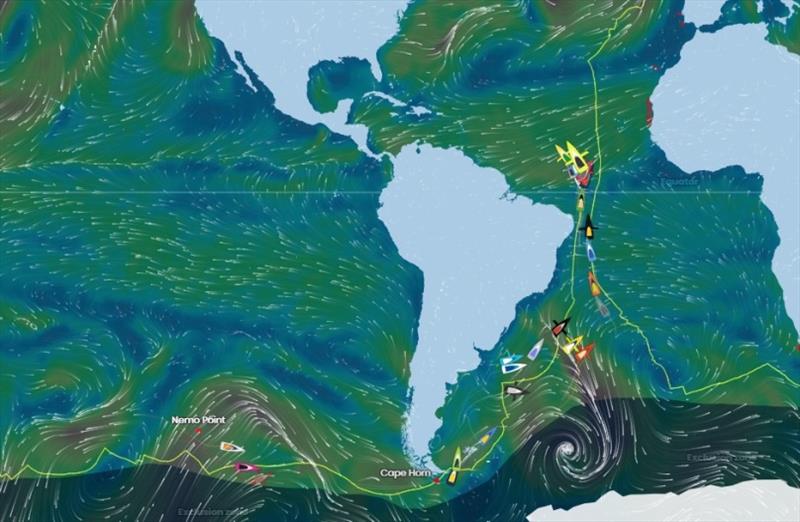 Burton, two years younger at 35, sails smart and makes smart choices but he has not risen through the same ranks – Mini, Figaro IMOCA – as Dalin did. After starting with a Class 40 he and his brother Nelson made a big impression early in the 2011 Transat Jacques Vabre in a new Farr IMOCA fading with technical problems they went on to finish 11th. Louis finished seventh on a brutally windy B to B race back from Saint Barths, his first big solo IMOCA race.

Theirs is a small team based out of Saint Malo from where Burton has mostly trained alone, selecting only key IMOCA races because of their relatively modest budget.

And while Mer Concept, and Dalin have developed, refined and optimised their latest generation Verdier design, the smartest decision of Burton and Bruno Peyroles – president and founder of French office supplies giant Bureau Vallée – was buying the perfectly proven, battle hardened winner of the last race Banque Populaire X before it has crossed the finish line four years ago tomorrow.

Behind them the chasing pack is regrouping and far from out of the battle, “The first are on a more westerly curve but their pursuers will have a more direct route which should benefit them,” explains Jacques Caraës. Some compression by the chasing groups is expected.

Germany’s Boris Hermann (SeaExplorer – Yacht Club de Monaco) dropped some valuable miles, snared in the Doldrums for hours last night. He retains a good position further north than his rivals and should now be able to outgun the other boats around him if indeed is playing with a boat at 100% as he contends.

“I had a very challenging 24 hours, very challenging psychologically, no wind at all yesterday and through the night, sometimes the boat spinning in circles, the pilot beeping like a mad thing, the sails flapping, still with huge sea state, a trough coming from somewhere. But I have have some wind now, it is super grey with rain, I am not out of the ITCZ but the wind is in the right direction, bit left maybe. But in these squalls you go in and sail in 27 knots of wind with upwind gear which was made for 11kts, lots of work and I am quite tense,” reported Herrmann early this morning.

Bestaven and Le Cam have or have had mechanical problems

For the nine leaders managing the final charge will be particularly tricky. “They will have to take care of their boats, the boats are tired and they are tired,” points out Christian Dumard, the Vendée Globe meteorologist. “Normally at this stage it is usually enough to be in a kind of safe, conservative mode to bring the boat home. But this time they are going to have to push and push hard in sometimes strong winds.”

At midday on the Vendée Globe Live show, erstwhile leader Yannick Bestaven (Maître CoQ IV) revealed that he had has had technical problems since the depression coming into Cape Horn. “I don’t have a pulpit anymore, no furlers and there are some sails that I can’t use anymore. These added to the difficulty of getting through the Doldrums but I feel like I’m coming out of it.” (Recall that Bestaven sailed low and SE after Cape Horn while Dalin cut the corner?) Jean Le Cam had also admitted having had recent problems with his engine mount.

Louis Burton (Bureau Vallée 2): “I am in attacking mode at the moment, doing everything I can. There’s a lot of strategic choices to make, negotiating the entry into the depression, having to pass the oceanic ridge, arriving in the Bay of Biscay, with boats that all have their advantages and disadvantages. So I’m really trying to make the most of all the advantages I have on board, and to look ahead to and plan for moments where it won’t be so simple. I have a boat that is well equipped to help me to get through all of that nicely. We’re going fast at the moment, on reaching, I have my foils.”

Yannick Bestaven (Maître CoQ IV): “I no longer have an intact boat and I have a lot of technical problems. When I rounded Cape Horn, I caught a big depression. I crashed violently which ravaged the whole front deck of the boat. I no longer have a pulpit, no furling system and there are some sails that I can no longer use. I tried to repair as best I could, to keep holding on, but I need a lot of sail changes and small weather sails that I couldn’t use. All this added to the difficulty of crossing the Doldrums. But I’ll try to finish in the best possible way”.

Jean Le Cam (Yes We Cam!): “At the moment we are in the famous Doldrums, the convergence zone of two weather systems. It’s a windless zone, and the further north you go, the faster you can get out of it. The first one to get out touches the wind, and can get a little bit ahead. It’s like the rich getting even richer! Anything is possible for the ranking! But I am not making a forecast. You are always asked to forecast what you can’t predict. And it’s never over until you cross the finish line.”