192 boats took part in the biggest Volvo Cork Week for many years, which incorporated the ICRA National Championships.

Teams from Ireland, France, Hong Kong, the United Kingdom, and the United States enjoyed a full five-day programme of racing both inside and outside of Cork Harbour. Established in 1720, the Royal Cork Yacht Club has an enthralling history as the oldest yacht club in the world.

Racing at Volvo Cork Week was held on five different courses for 14 different classes. The 2022 edition of Volvo Cork Week lived up to its billing as a huge celebration of Royal Cork Yacht Club’s signature regatta to celebrate their tricentenary. Close to two thousand sailors took part and the Royal Cork’s clubhouse in Crosshaven was buzzing after racing and into the evening.

The Volvo Cork Week Prize Giving was opened by Royal Cork Admiral Kieran O’Connell who commented to huge applause: “On behalf of the Royal Cork Yacht Club and our sponsors and partners, I would like to extend the biggest thanks to every single competitor from near and far that gave their time money and effort to attend one of the most iconic sailing events of 2022. As a competitor, I would offer thanks to all of the seasoned race officers and their teams on all five race courses, which in difficult conditions pulled off an outstanding display of race management.” 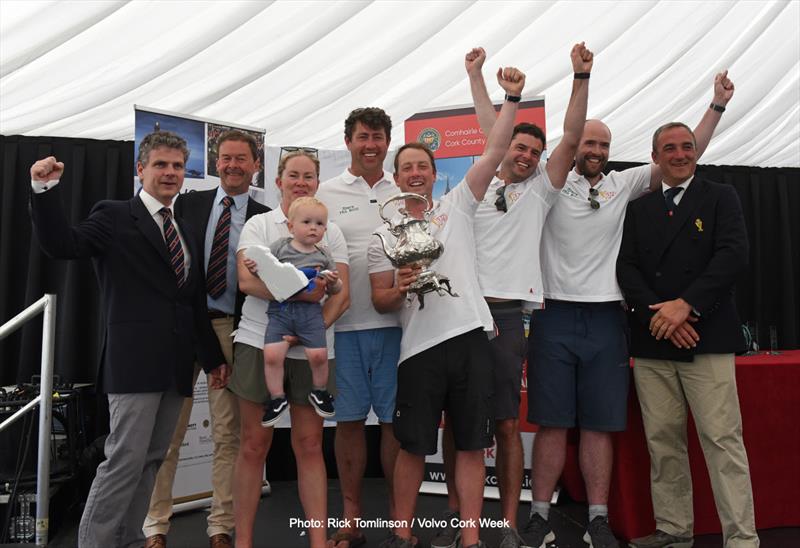 43 1720 Sportsboats raced at the biggest meeting for the one-design class for many years. The racing was as intense as the partying at the RCYC Clubhouse. Veteran 1720 sailors joined forces with younger crews for close racing for five days to decide the 2022 1720 European Champion.

“What a crew – the magic flows between us!” commented Ross McDonald. “There is a really good rhythm on board, which is very important. This fleet had some really good teams racing but we managed to hold it together. A big thank you to the race committee for organising great racing and also to April English, the team’s mum, for child care and a whole lot more. Let’s hope the 1720 Class springboard from this, it would be great to race in big fleets on a regular basis.”

Royal Cork’s Dave Kenefick racing Full Irish finished the regatta with a race win to secure second place for the championship. Robert Dix Elder Lemon from Baltimore SC was the top boat on the last day, scoring a 1-3 to make the European Championship podium. 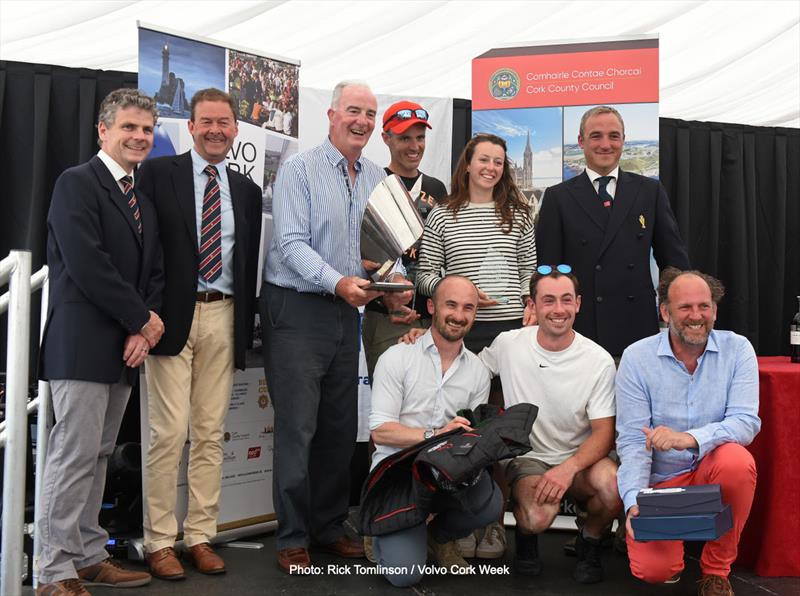 “In 1997 we won the first 1720 National Championships, so in 2022 to win the first Cape 31 Nationals has a special ring to it!” commented Anthony O’Leary. “There is a very high level of competition in the Cape 31s, and it was great fun as well. Every day we go out, we are learning so much. This has been a light airs week and we still have loads to crack in the medium and heavy airs. It is very exciting to be on this learning ladder, and we are having a ball, the boats are spectacular!” 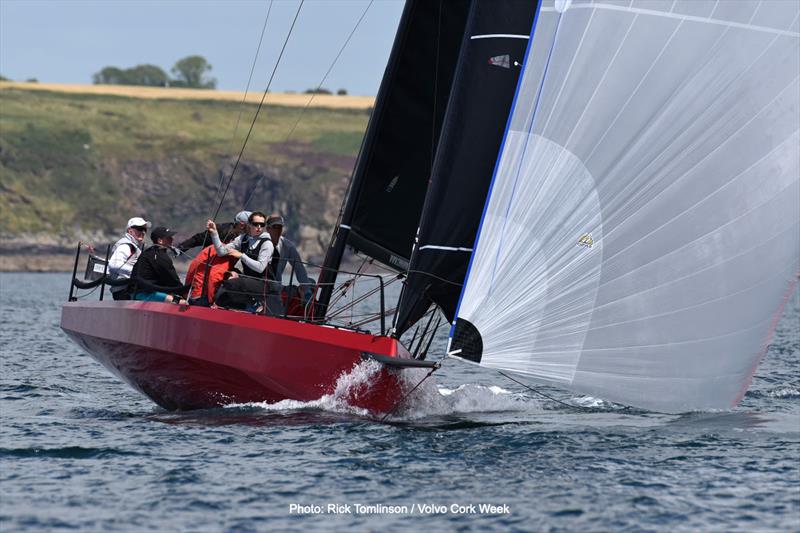 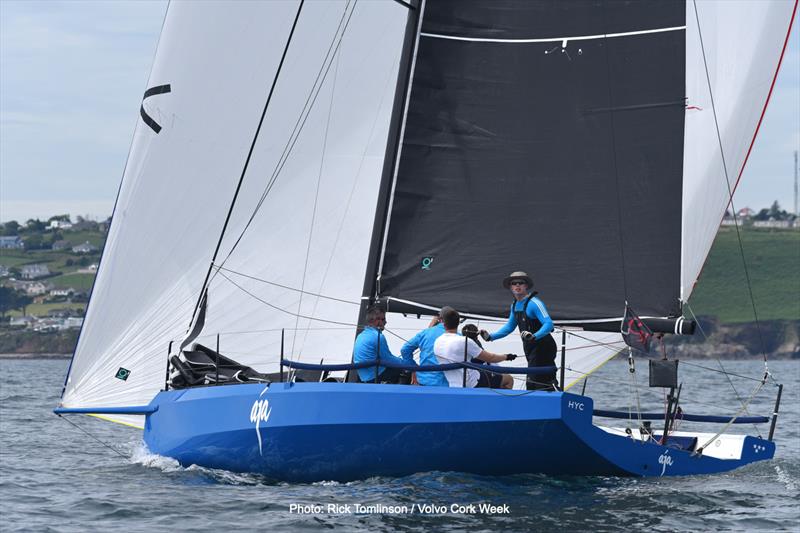 The third edition of the Beaufort Cup attracted teams from Ireland, UK and the United States for the Service Sailing Regatta with the winning crew take home the Beaufort Cup. The schedule kicked off with a 120nm race around the Fastnet Rock, followed by three exhilarating days of inshore racing. The top three teams all received thousands of euros in prize money for their chosen charities. The winning team, Crosshaven RNLI, together with funds raised on the Ladies’ Day Lunch at Volvo Cork Week, made over 20,000 euros for RNLI Ireland. 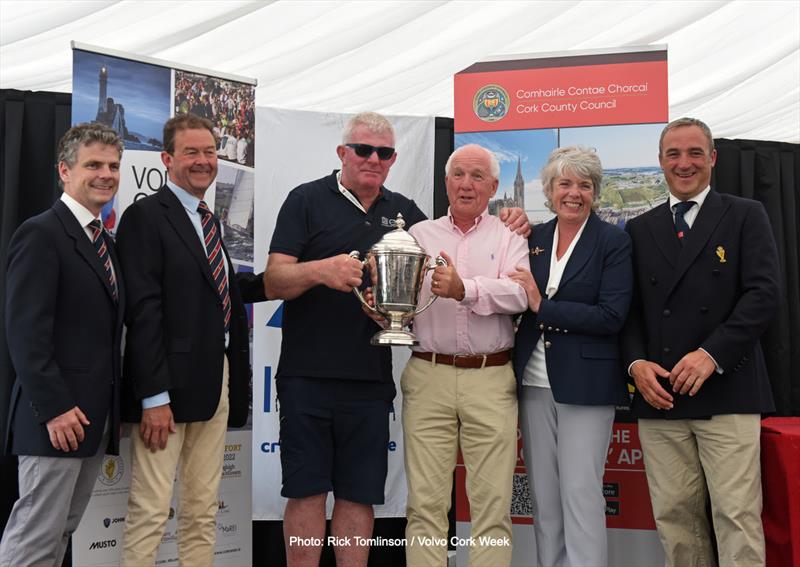 The Crosshaven RNLI won the 2022 Beaufort Cup on Annemarie Fegan and Denis Murphy’s Grand Soleil 40 Nieulargo. Despite taking line honours in the Fastnet Race, Nieulargo corrected out to fourth after IRC tie correction. However, inshore four wins gave the team victory for the series. Second is the British Royal Navy team racing J/109 Jolly Jack Tar, skippered by David Warwick. In third for the series is the US Marines Team skippered by Peter Quinn on First 40.7 Escapado. Tom Roche’s Defence Force Ireland team on Salona 45 Meridian is fourth. A special mention to the British Army team that won the Fastnet Race in Trojan with a Royal Engineers team skippered by Rob Duke.

“It is wonderful to have the teams from Ireland, America and Great Britain all racing together at the Beaufort Cup,” smiled Dennis Murphy. “We can actually see the RNLI Lifeboat from the Royal Cork Yacht Club and we are delighted to have won this, it is a fantastic event.”

Irish Defence Minister, Simon Coveney was racing again this year with the Irish Defence Forces team on Meridian. “We started the Beaufort Cup eight years ago; the idea was to bring people in uniform together. Bringing teams together and building friendships through sailing and competition. It has been a great success and we want to keep building it internationally.” 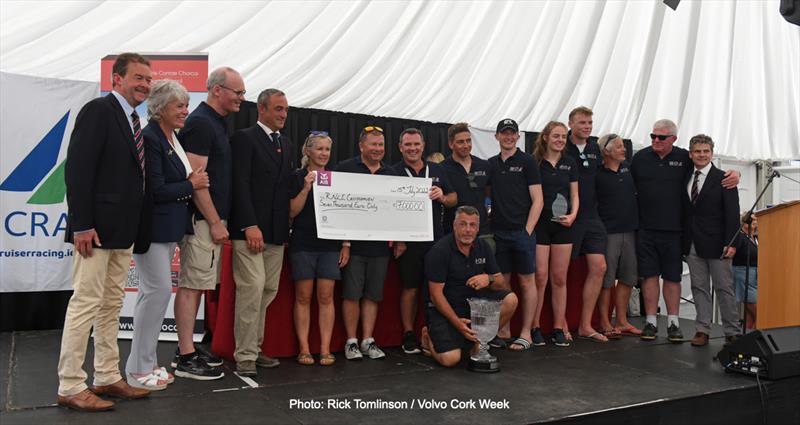 A huge variety of 21 boats competed under IRC for the Coastal Class enjoying five long races with courses inside and outside Cork Harbour. Every race was won by a different boat, Peter Dunlop & Victoria Cox with a team from the Port St. Charles SC, won the last race of the series to win the IRC Coastal Class. Jamie McWilliam’s Ker40+ Signal 8 representing the Royal Hong Kong YC had led for most of the regatta but finished runner-up. Robert Rendell’s Grand Soleil 44 Samatom from Howth YC is third, having held off a strong challenge from Michael O’Donnell’s J/121 Darkwood.

“We dismasted at Cork Week in 2010, so it is so good to get back and have so much fun,” commented Mojito’s Vicky Cox. “We were up against the big boys this year, and this is an awesome win, a great way to celebrate my birthday this weekend!” 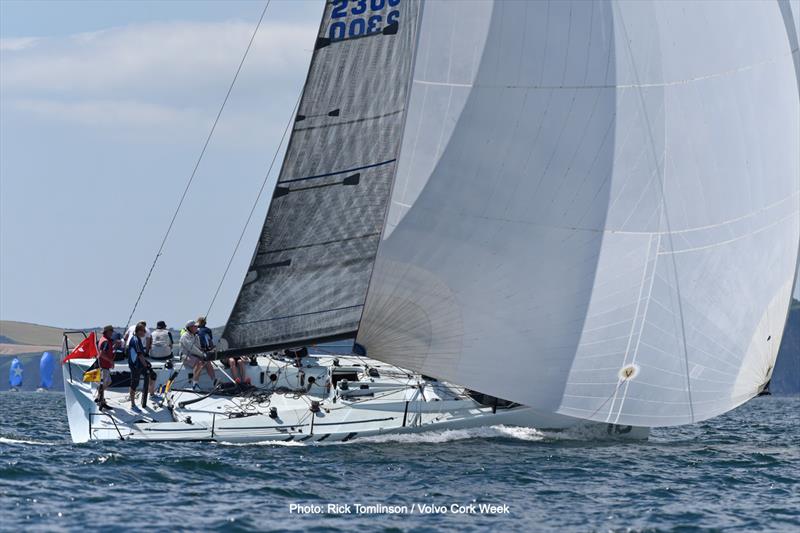 17 high performance racer-cruisers had eight races on a mixture of longer round the cans courses and shorter technical windward leeward racetracks. On Day two of Volvo Cork Week, the British J/112 Happy Daize was not even in the top three. However, four bullets and a second propelled the team to the top of the leaderboard. James Chalmers and his Knight Build team racing Happy Daize will be cutting some shapes on the dance floor tonight! Louise Makin and Chris Jones’ J/111 Journeymaker II from the Royal Southern YC finished in second. Nick Burns Royal Hong Kong team racing Mills 39 Zero II, scored their second race win on the final day to secure the final podium position.

“This is amazing to be honest,” commented James Chalmers, skipper of Happy Daize. “This event has always been on my calendar since I was a kid, so to come here has been just stunning. The team did so well, and our tactician had to be brave in the light airs and make tough decisions. The best thing about the boat is that it is good in all conditions and excellent in others, and this week we have been very lucky with the weather.” 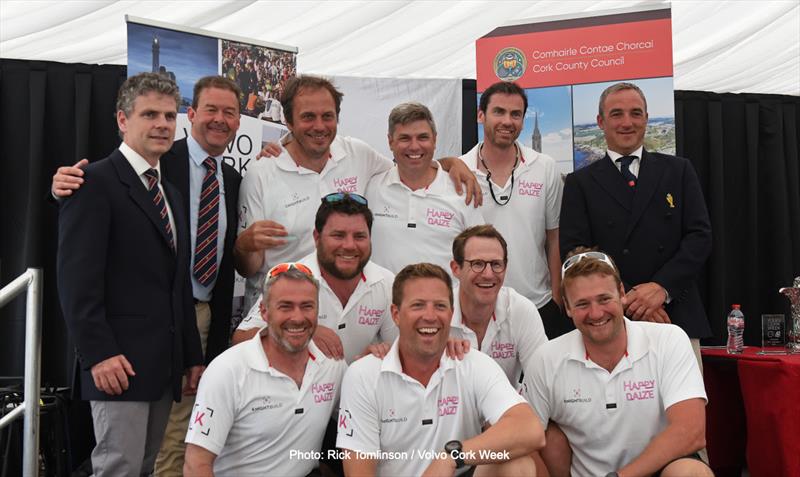 16 teams had windward leeward and round the cans courses over the five days. John Maybury’s J/109 Joker 2 with a team from the Royal Irish YC, is the class champion. Joker 2 scored four race wins and nine podium finishes in ten races. Second is Pat Kelly’s J/109 Storm with a team from Howth YC & Rush SC. Third is Barry Cunningham’s J/109 Chimaera with his Royal Irish team.

“We are absolutely delighted, we have had a ball all week,” commented Joker’s John Maybury. “I could not ask for more from my team, they have been brilliant, everyone did their bit. The weather was fantastic, the competition was tough, this has been an absolutely memorable regatta. Thank you so much to the organisers.” 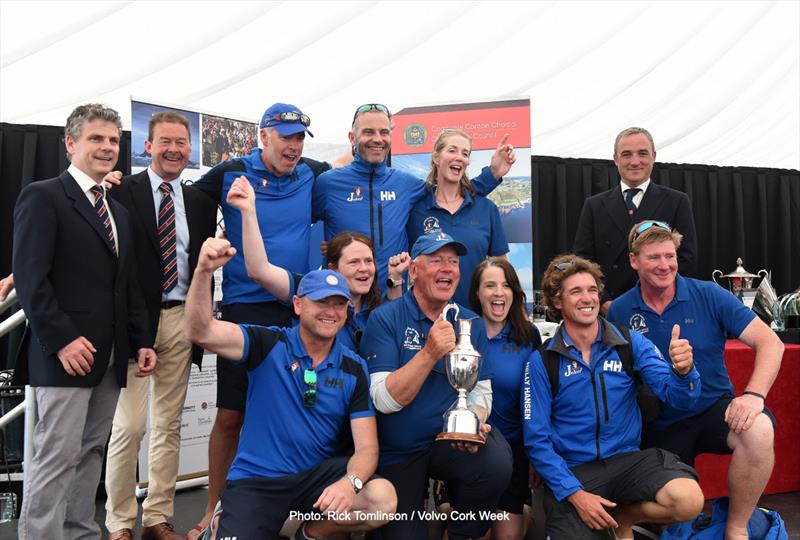 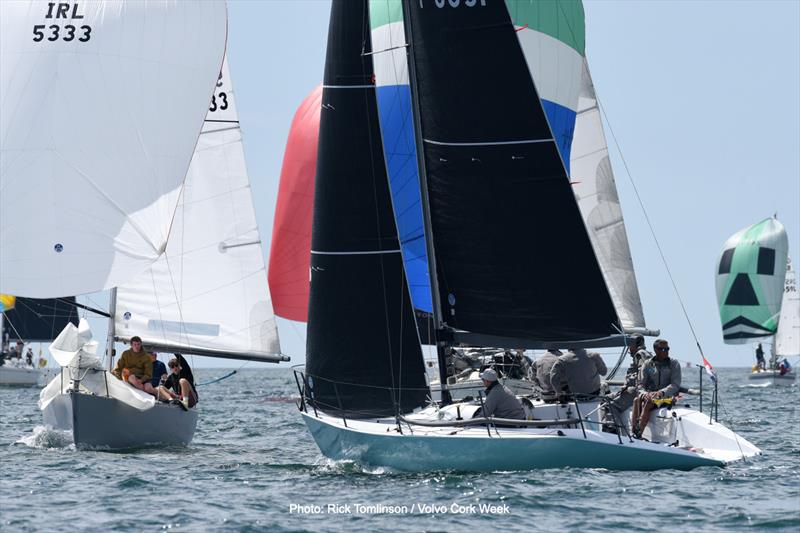 The Classics at Volvo Cork Week were a magnificent spectacle racing in picturesque Cork Harbour every day. Five races were organised for nine beautiful boats with superb vistas in White Bay and along the Holy Ground outside Cobh Town. The podium was filled by boats from France, Ireland, and Wales. JJ Ollu’s French classic Bilou-Belle, from the Atlantic YC, has won the Classic Class by just two points from Patrick Dorgan’s Cork Harbour One Design Elsie. Third is Dafydd Hughes’ Welsh S&S 34 Bendigedig, which also won the Prince of Wales 300th Anniversary Trophy.

“I have been here twice before, I thought why not come back and party and see how we get on, and the Prince of Wales Trophy is going to Wales!” commented Dafydd Hughes. “If the weather systems allow me, I will be racing Bendigedig around the world in the 2023 Global Solo Challenge. ” 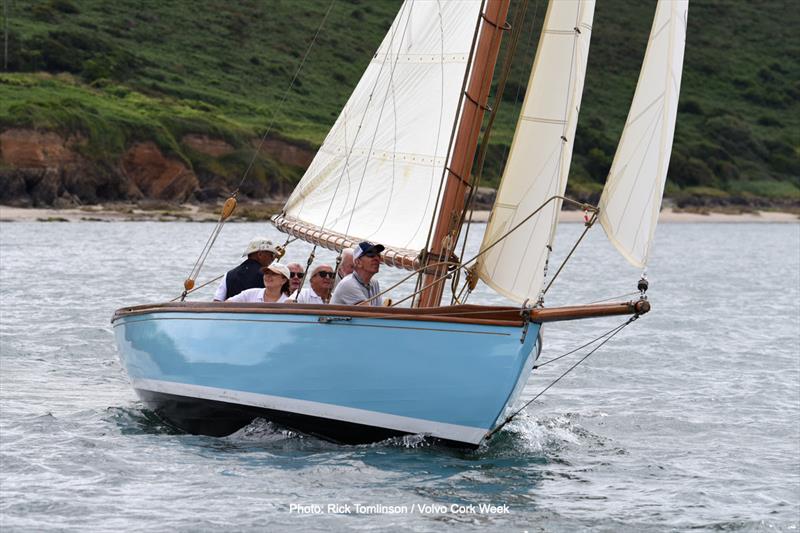 A blaze of Dragons raced at Volvo Cork Week with entries from Kinsale YC, Royal St. George YC, Royal Irish YC, and Glandore Harbour YC. Races were held on the Windward Leeward Course off Roaches Point. Cameron Good’s Little Fella from Kinsale YC scored three race wins in a huge variety of conditions to win the Dragon Class. Peter Bowring’s Phantom from the Royal St. George led after the second day but finished the six race series as runner up. Daniel Murphy’s Whisper from Kinsale YC is third by just a point from Phantom. 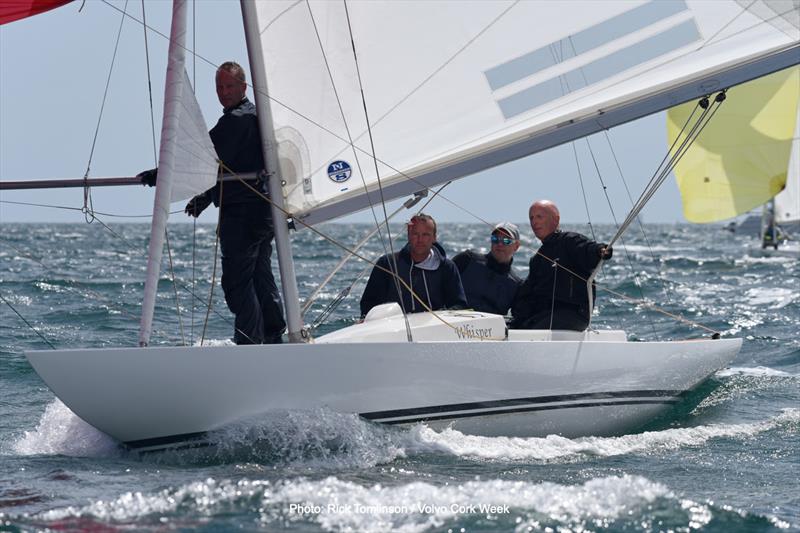 25 teams raced in two classes under the progressive Echo handicap system with rating changing from day to day according to previous results. Courses were organised in Ringabella Bay and Cork Harbour, specifically designed for white-sail racing. The beauty of the non-spinnaker classes is that boats do not require a huge crew to race, and it is a wonderful way to introduce new sailors to racing. The combined Non-Spinnaker Classes came from the Royal Cork YC, Kinsale YC, Waterford Harbour SC, National YC, Irish Naval Service and Whitehaven in the Lake District, UK. 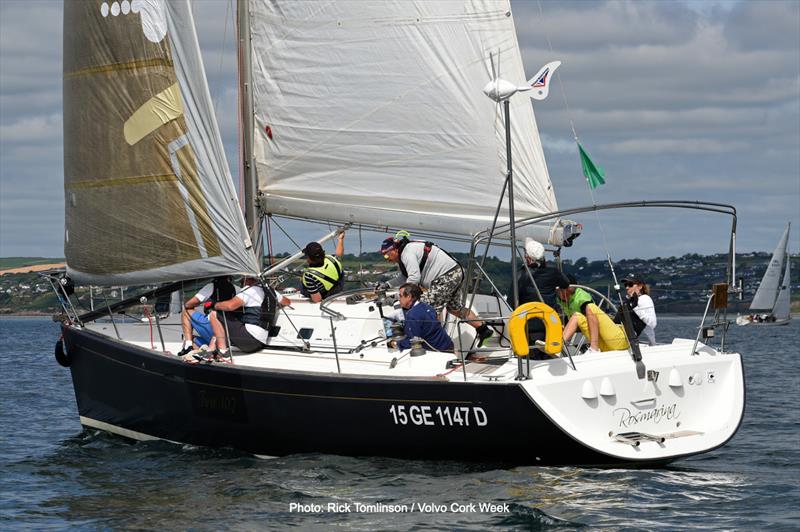 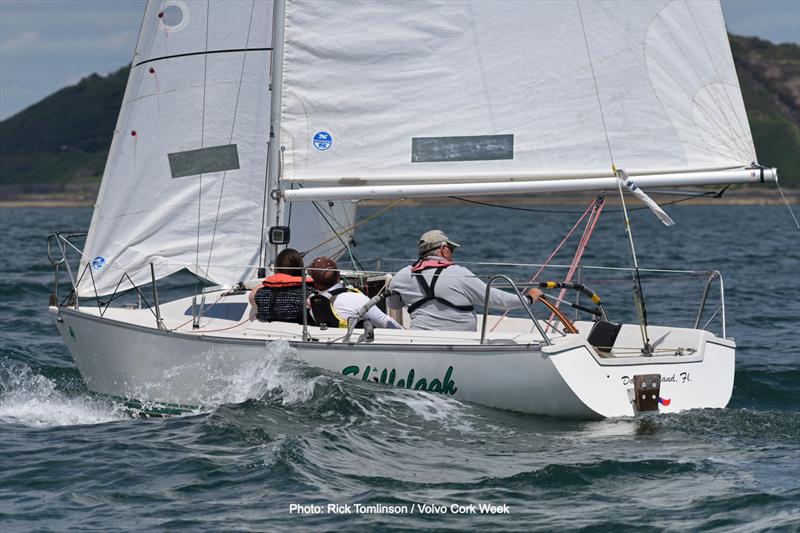 John Twomey is an Irish Paralympic sailor and has represented Ireland at 11 consecutive Paralympic games winning medals at three and is the President of Irish Sailing:

“Sailing is back, up and running and Covid is over,” commented John Twomey. “It is great to see so many boats and people at Cork Week, Irish sailing is on the up and up.”

For more details and information about Volvo Cork Week go to www.corkweek.ie