The Denmark SailGP Team, presented by ROCKWOOL, unveiled its supercharged F50 catamaran in Sydney on Tuesday, as preparations for the first SailGP race of Season 2 gather pace.

The Danish crew will join six other nations on the start line on 28-29 February as the adrenaline-filled, global racing championship kicks off for 2020 – and as the boat launched in Australia, the team revealed a special guest as part of the eye-catching boat livery.

The red and white flying catamaran features an iconic design on the 24-metre wingsail – an image of Danish national symbol and mythological warrior Holger Danske – ensuring that the boat will turn heads as the team starts its training for the opening race in Sydney at the end of the month.

Holger Danske, also known as Ogier The Dane, is a famous Danish knight. According to Danish folklore, he sits waiting in the dark cellar of Kronborg Castle – and, when called upon, will return to defend his country’s honour.

“Today is a huge day for the Denmark SailGP Team, for our title sponsor ROCKWOOL, and for Danish sport as a whole,” said helmsman Nicolai Sehested (30).

“We’re proud to be flying the flag for Denmark. It is something special to represent your country on a global stage like SailGP – and it gives us even more confidence to know that we’re going into battle with Holger Danske on our side.” 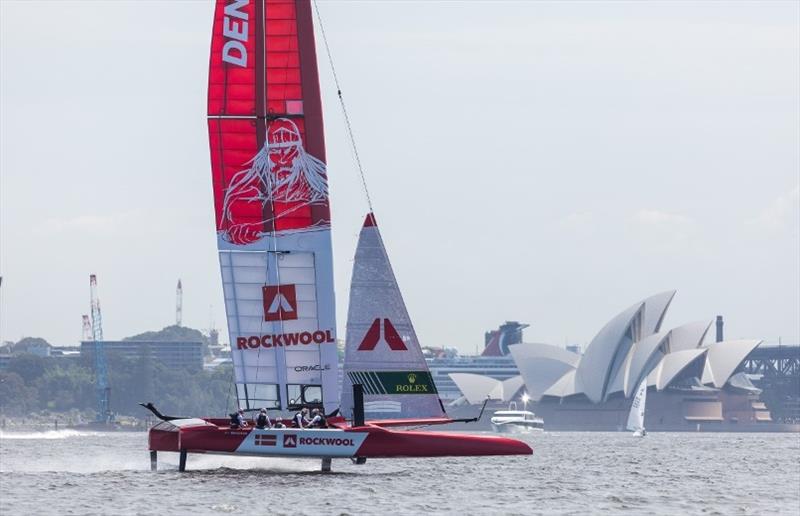 Holger Danske rises as Denmark SailGP Team launches boat in Sydney © Denmark SailGP Team is the youngest helm on the Season 2 start line, but joins the league having carved out a stellar reputation as a skilled operator behind the wheel, honing his talents in two editions of The Ocean Race and several seasons on the World Match Racing Tour.

Former America’s Cup and The Ocean Race competitor Tom Johnson (AUS) is the only non-Dane on the crew, and brings valuable experience having raced with USA SailGP Team in SailGP Season 1. The team is managed by Olympic silver medallist Jonas Høgh-Christensen (DEN).

“The crew has been working hard, in an extremely tight timeframe, to be ready for Sydney – and now the boat is launched, we can spend more time training in Australian waters before racing begins next week,” said Høgh-Christensen.

Mirella Vitale, Senior Vice President Marketing and Communications at ROCKWOOL, said: “It’s exciting to present the Danish SailGP Team in the iconic Sydney Harbor. We’re confident in the ability and experience of the team and believe they can achieve great things this season. This event provides ROCKWOOL Group a global platform to raise awareness and share our optimism around solving today’s sustainability challenges, especially in urban environments.”

Having announced its participation in December, the Danish team has had just eight weeks to prepare for the fastest sail racing on the planet. Sehested is positive that his crew can not only compete, but may even spring a few surprises.

“Our goal is to have a good race in Sydney, and continue to learn the boat and grow as a crew. We have to be realistic – most of the other teams have years of experience together, racing in these boats – and we sailed together for the first time last month.

“This is a huge challenge, but we’re quietly confident. We’re not here to make up the numbers. We know we can push the other teams right to the line and we can’t wait to get started.”

For the ultimate race companion, download the SailGP app from the App Store/Google Play. The 2020 eSailGP Championship will launch on 25 February, with training opening a few days before real-life racing kicks off.