A self-steering device is a piece of equipment that no offshore solo sailor can be without. But modern autopilots go way beyond simply keeping a constant heading.

The current breed of sophisticated systems is not only steering faster than most humans can manage, but changing the way that modern IMOCA 60s are sailed and even designed.

But for the public, with nothing to see on the outside and working silently on the inside, there are precious few visual clues as to the huge technical leaps that are taking place. So big in fact, that the sport as a whole could be facing a crucial decision as to how far mechanical assistance should be allowed to go.

Yet, whatever the outcome of this long-term conundrum, the bottom line is simple, modern autopilot systems are in the process of delivering one of the biggest changes in a generation across a broad swathe of the sport, for both racing and cruising.

Among the many reasons for this big step forward is the ability to keep tabs on the complex motions on board, particularly in a seaway. Understanding this motion in detail provides the first essential step in being able to anticipate what rudder movement will be required. In the past, fluxgate compasses provided a means of motion sensing, but by today’s standards and expectations they are too crude. Until fairly recently, for an autopilot to feel the boat sufficiently to keep a modern performance boat on the boil required an expensive gyro compass that only fully funded professional campaigns could afford.

Today, accurate motion sensing is far cheaper and more efficient, using solid state rate sensors, similar to those used in smartphones. Sensing pitch, roll and yaw, each in three different axes, these sophisticated motion sensors are now commonplace in many modern autopilot controllers. Being able to monitor the boat’s attitude at any given moment for any given set of conditions allows sophisticated software to learn how a particular boat behaves.

With the yacht designers’ performance predictions as a target, modern pilot systems do as much as they can to achieve the performance goal. And sometimes the ride for the humans can be quite lively. 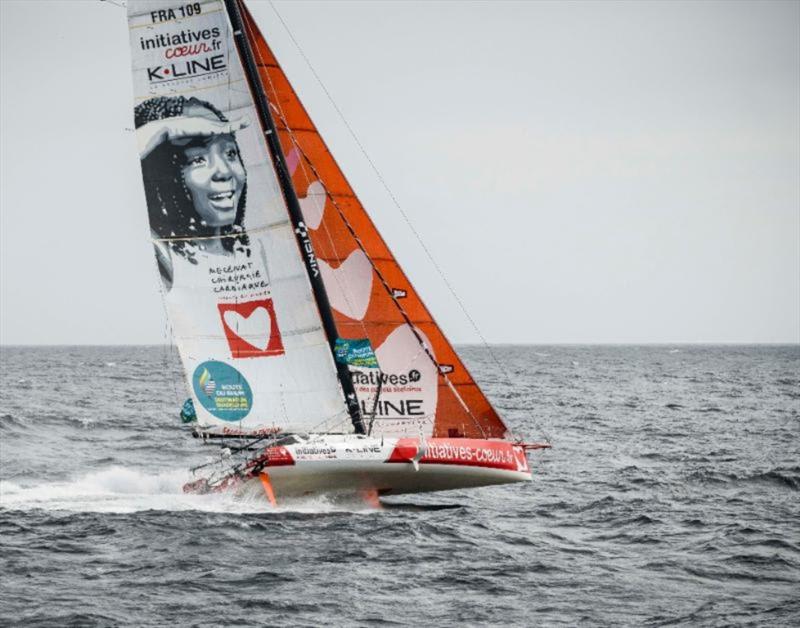 “I’ve been working with Madintech for the pilot system aboard my boat Intitiatives Coeur,” said skipper Sam Davies. “They provide pilot systems for many of the Ultime multihulls and among the various settings that are available there is one that steers the boat to maintain an apparent wind angle and speed that does things that I hadn’t dreamed of trying if I was steering – It makes for quite a violent ride at times.”

But it’s a ride that she and other skippers are learning to understand.

“My autopilot definitely sails faster than I do,” she continued. “When you’re sailing singlehanded or doublehanded there are times when you cannot trim the sails fast enough to keep up with the autopilot. The result is that you have to sail differently and there is a new style of sailing to be learned.” 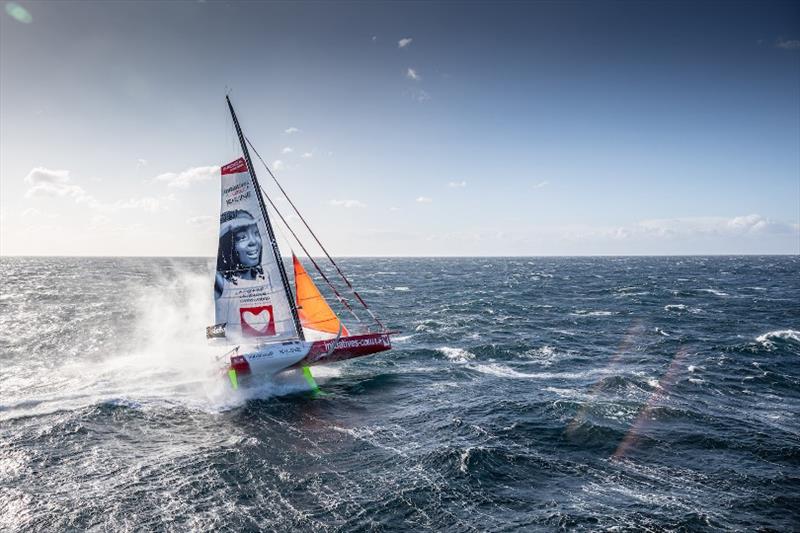 On top of this, with skippers unable to trim quickly enough to match the new motions that the pilot is putting the boat through, sail design has needed to change as well in order to create sail shapes that can work efficiently across a wider range of apparent wind angles without being trimmed all the time.

“It’s not a completely new style of sailing, but there are definitely things to get your head around because we’re going at speeds that these boats haven’t been going at before, especially when it comes to average speeds. We’re starting to feel the air drag that the boat creates a lot more and the sail trim is different. The differences in speed are bigger too. So, as you start to take off on the foils, you start to accelerate quickly which means you have to keep up with the trim. Sometimes you can’t, so your sail trim needs to be able to cope with this.” 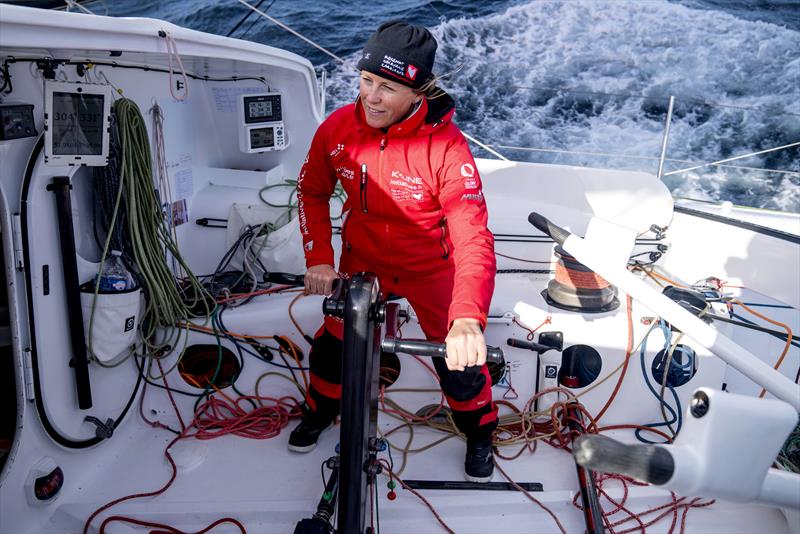 Changes to the way in which skippers trim the sails has in turn meant subtle changes to deck layouts and specifications to ensure that they can keep their boats at their optimum performance. Some of the core design features of the hull and underwater appendages have also changed as a result.

The growing number in the IMOCA60 fleet that are capable of sustained boat speeds in excess of 30knots means that designers have been forced to balance rudder blades in such a way to avoid them becoming dangerously twitchy at speed. But this makes them difficult to handle manually at lower speeds where the helm becomes much heavier. This not only means stronger components and mountings for the autopilot are required, but makes manual steering much harder.

The extraordinary development in foils and the performance leap in certain conditions that has followed has also been a big factor. Such is the nature of this new development at the leading edge of the sport that there is no form guide. 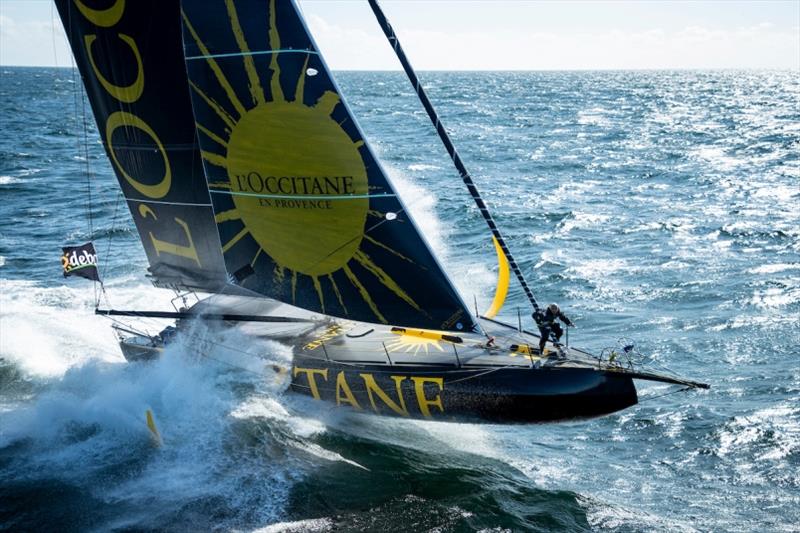 Furthermore, the IMOCA60 design rules prevent the foils from having flaps or aileron type devices to help control the amount of lift as an aeroplane’s wing might. The rudders cannot have T-foils either, further restricting the amount of control that’s available. The result is a wing like foil that is trying to make the boat fly, yet with few controls to help it stay in balance when it does.

Instead, one of the key controls is the rudder, so now, in addition to heading and performance, the autopilot needs to take flight into account as well. It’s a complex picture.

The net result is that gradually, as the technology develops and skippers’ understanding of how the systems work and how the boat will react becomes better understood, sailors are spending less and less time on the helm. This in turn is changing the layout of cockpits where crew protection doesn’t have to be linked to where the helming position is.

“Another reason why an autopilot steers better is because these boats are not designed to be hand steered,” continued Davies. “So, the steering position is not prioritized during the build and design, but crew protection is. At the speeds we’re travelling now you can’t stay in an exposed position for more than about 10 minutes without getting hit by a huge cascade of solid water.” 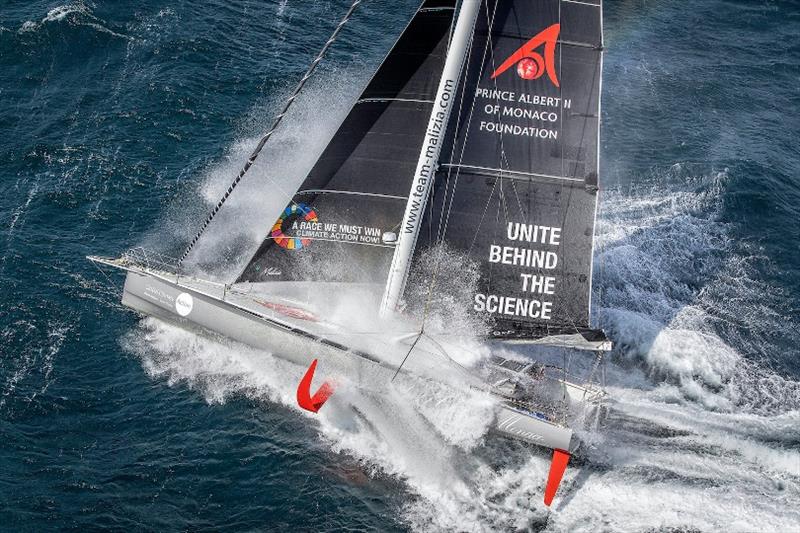 Aside from being uncomfortable, being hit by a wall of water doing 30knots could cause a serious injury too, it’s the stuff of nightmares for solo sailors.

The bottom line is clear. Modern, sophisticated autopilots are making a huge contribution to one of the biggest leaps in performance that the racing world has seen. And as history has proven, when there’s a big step forward in racing, the rest of the sailing world often feels the effects in time.

In this case, progress for the rest of the sailing world may not be in monohulls that fly or sustained speeds of 30 knots or more, but in intelligent autopilot systems that know how to sail our boats more efficiently, comfortably and more safely than we do.

So, while the debate as to whether mechanical assistance should be capped will gather momentum, surely few will argue with that.