With four wins on the scoreboard Luna Rossa Prada Pirelli comes away of the first PRADA Cup Final weekend having stamped their authority and with the first to seven going to the Match, INEOS TEAM UK path gets steeper and steeper.

A first tight races with Luna Rossa Prada Pirelli and INEOS TEAM UK displaying perfect one-on-one duels of tacks and tactics, was followed by a race in which the British team made one pre start mistake and were left chasing the Italians for the remained of the race.

With the boats performance looking pretty even, the start becomes a defining moment. The Italians simply sailed better and dictated both races to the British.

The races have been held today on ‘the back paddock’ – as the Race Course E is commonly called – with a north-easterly breeze between 16-20 knots in front of another large spectator fleet. 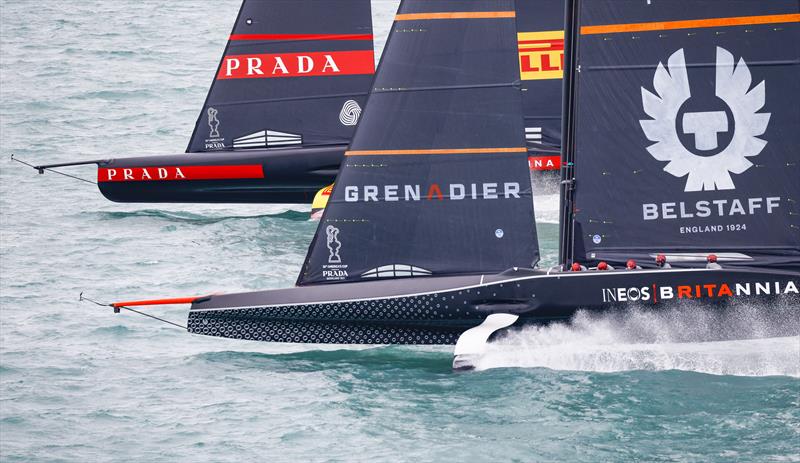 Both boats needed to tack onto port to cross the start line, but it was Luna Rossa Prada Pirelli that controlled the game up the first upwind leg. Although there were just seconds between the pair, the Italians seemed confident to play their own game even though they needed to cover their opponents.

At the first gate Luna Rossa rounded 9 seconds ahead. By gate 2 at the bottom of the first downwind leg the margin was down to 6 seconds. Both went around the right-hand mark, but INEOS TEAM UK turned around and tacked immediately, an impressive move.

Meanwhile, Luna Rossa Prada Pirelli headed out towards the right-hand side of the course, apparently happy to allow the British to split from them. Once again, another demonstration of the confidence aboard the Italian boat. 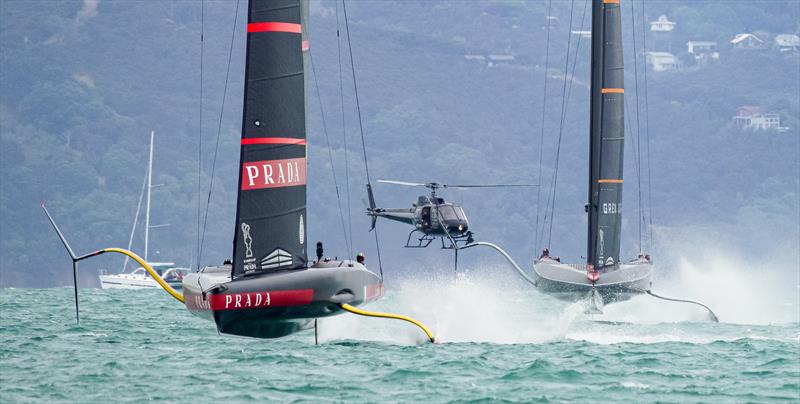 By gate 3 at the top of the second beat Luna Rossa had increased their lead to 18secs.

The next leg saw the British haul some distance back, rounding the right hand mark of gate 4 eleven seconds behind. Another tacking duel was in store for the last windward leg and by gate 5 the margin had reduced by one more second to 10secs.

Just one leg left. Luna Rossa Prada Pirelli needed to protect, INEOS TEAM UK had to attack but the options for the British were running out. A third of the way down the final leg a split occurred as INEOS TEAM UK gybed away and Luna Rossa didn’t follow. But when they came back together the Italians had gained, the right hand side of the course had paid once again.

A few seconds later and Luna Rossa Prada Pirelli crossed the line to take their third win in a row.

The pressure continued to build for both teams. INEOS TEAM UK needed to get a point on the board to break the run of the Italians, while Luna Rossa Prada Pirelli were keen to finish the day with a second blow to the British.

On the pre-start entry, Luna Rossa headed out to the right-hand side of the zone while INEOS TEAM UK chased. When they came together the British crossed Luna Rossa before gybing to leeward, but in doing so the British lost control and wheelied the boat. One mistake that gave the start to the Italians, but not by as much as it could have been. 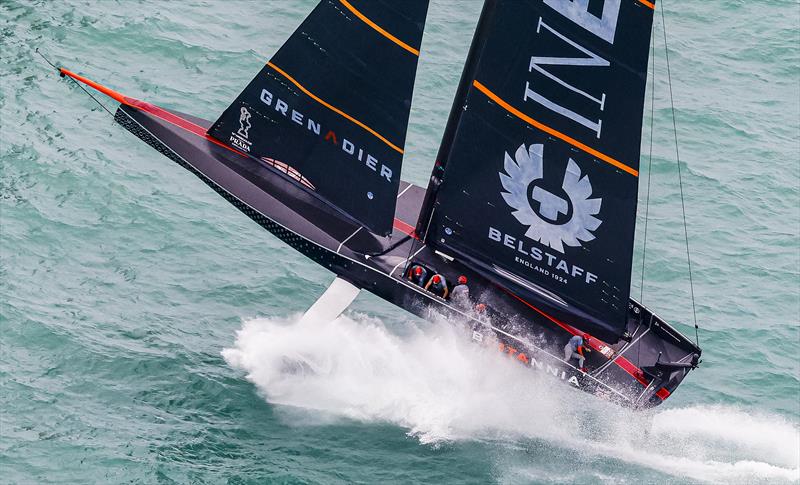 The Italians were early which allowed the British to recover some of the lost distance.

Just like the first race of the day, another tacking duel began as the pair headed up the right-hand side of the first beat, the Italians controlling the match as they covered their opponents.

At the first gate Luna Rossa rounded the left-hand mark 12 seconds ahead. INEOS TEAM UK took the same mark but gybed immediately to try to force a split. 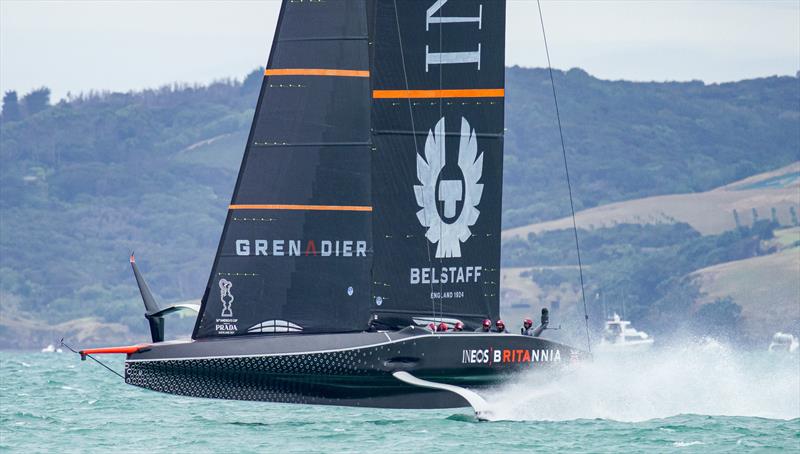 Once again, the dialogue on Luna Rossa Prada Pirelli was cool, calm and confident, taking their time before gybing to cover the British move.

Coming into gate 2 at the bottom of the first downwind leg, both teams went around the right-hand mark but INEOS TEAM UK chose to roll straight into an immediate tack as they discussed preferring the left hand side of the course.

Meanwhile, the Italians believed the right was the better side, but were happy to tack and cover the British.

As INEOS TEAM UK headed out to the left-hand side of the course they incurred a penalty as they infringed the boundary. Giving 50m away was not what the British wanted or needed. For the Italians, the unforced error was a bonus in this tightly contested match.

By gate 3 Luna Rossa was now 21sec ahead as they rounded the left-hand mark. By the bottom of the downwind leg they had taken another second. 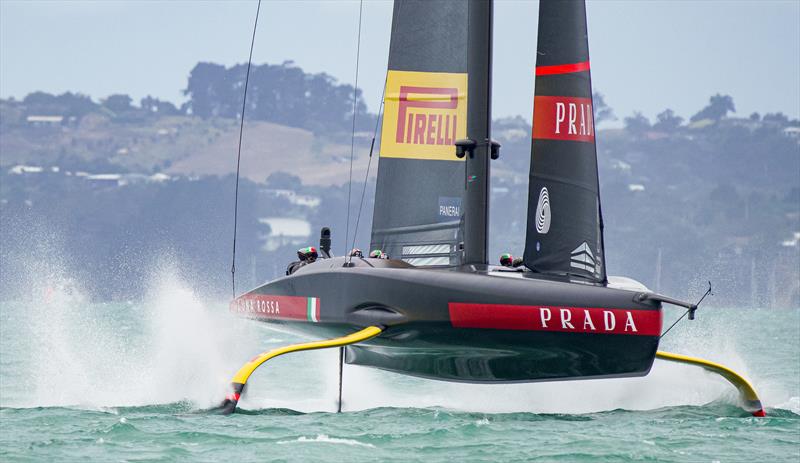 The breeze had swung more to the right and being the lead boat, the Italians were in a better position to benefit from it.

Meanwhile the British, while they knew the right might be better, were forced to split from the Italians. Following rarely works if your boat is no faster than your opponents and the British knew it, they had to try something different.

But up the last beat the better conditions continued to be on the right-hand side of the course. Luna Rossa had played this leg perfectly, just as they had with the entire race so far.

Passing through the last gate with just one leg to go Luna Rossa were leading by the biggest margin all day, 37seconds and with the breeze shifted to the right there were few options for the British to overtake.

Barring disaster, a fourth win was in the bag for Luna Rossa Prada Pirelli. Minutes later it was theirs.

Four in a row, the Italians were now over halfway to the Prada Cup.

Quotes from the Race Course

‘About the first race’
“Obviously we are super happy. The British are not easy to beat; even with the bad start they had, they were very close and they wouldn’t give up. In these situations tacking on your competitor or giving them space, is a very hard decision, but if you want to keep the game very close and to squeeze the opponent into a corner, you need to keep tacking. This is something the grinders don’t like, they don’t like this play, but today I think it was the way to do it. INEOS TEAM UK were pretty much in phase all the time and we had to stay with them.”

‘About 4 points in a row’
“We are happy but the focus must remain high. We must use tomorrow and Tuesday to improve, we have to keep improving. We can feel the Italians cheering for us. The support we receive is amazing. People think that Italy is all about football, but sailing is having a good fight at the moment.”

‘About the first race’
“In the first race we made a mess of the start but after that we had a good race. They did a great job keeping it tight, two pretty even boats, two great teams. We came out of the wrong side and we are not happy about it, although it was a good race. The grinders with so many tacks (17) are on the limit as they were really pushing hard. Checco is right they don’t like tacking like that, but this is what they train for, they do all the hours in gym for this. They say they don’t love it, but secretly they probably do.”

‘About the day’
“Tough day we are not happy with it, because we can sail a lot better than that, and we need to. We gave away two races to these guys; we were bad enough at the start line.

Credit to Luna Rossa they sailed very well and they didn’t give us really a chance to get back into it. At this level you can’t afford to make any mistakes and we made too many. So we have to go away and regroup and really get ready for Wednesday and come out swinging.”