It is with great excitement that The Race Around can today confirm the first competitor campaigning to be on the start line of Class40s new around the world race.

Having spend a decade on the Multi50 “Arkema”, Lalou Roucayrol embarks on a new adventure with Class40 culminating in The Race Around 2023.

From the Medoc region of France, Lalou Roucayrol the winner of the 2017 Transat Jacques-Vabre and numerous other offshore races (for further detail please see below), will compete alongside a number of co-skippers from his Lalou Multi training centre. The objective is to provide a platform for younger competitors to gain a full understanding of the values associated to ocean racing and the build of their own Class40.

Lalou Roucayrol, Skipper: “The Race Around offers the perfect opportunity to bring together what we have been building for several years with Arkema and Lalou Multi. Our projects have always been educational and the possibility offered by The Race Around to alternate crew at each stage of an around the world race is a wonderful way to develop talent. 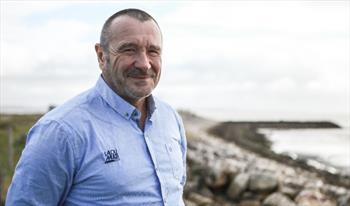 There are several reasons why we’ve decided to embark on this new project. First of all, the Class40 is a very similar state of mind to that of the Multi50. These boats are designed to be safe and fast. That combined with the ability to validate much of the technology we have been developing for many years, notably a boat built using 100% recyclable liquid thermoplastic resin. We also want to follow those that have gone before, to sail around the globe whilst achieving carbon neutrality.

With a Vendée Globe where it is increasingly difficult to find budgets for a winning campaign and the end of the Barcelona World Race, there is a place today for a competitive around the world race in Class40, where competition is key but budgets remain under control. The race follows a course and stops in cities historically lined to sailing, it gives meaning to what we do. For me that’s important. We’re extremely happy to be the first team announced and to be part of the history of what I truly believe fills a large gap within the world of offshore yacht racing.”

Sam Holliday, Managing Director, The Race Around: “Today is a hugely exciting day for The Race Around and a day we’ve been working towards for some time now. For The Race Around to have attracted a sailor with the pedigree of Lalou Roucayrol highlights the desire for a race such as this within the offshore racing calendar.

Lalou’s background as not only one of the worlds most experienced multihull sailors but as a boat builder and key figure within the yacht racing industry brings us real excitement. His campaign aligns perfectly with our goals and Lalou’s commitment is one of many announcements we’ll be making with in the coming months.”

The Race Around continues to develop

Almost 1,200 days sit between now and the proposed start of Class40s new race around the world. The organisers continue to work on attracting commercial partners to this multinational event. With conversations ongoing, several international companies have shown great interest with others already committed. Announcements are in preparation and will be released in the coming months.

The route is in the final stages of being confirmed, with the majority of the host cities now committed to hosting the first edition of The Race Around. The city of departure is still available however the organisation is in detailed conversation with two French cities.

Emmanuel Versace, French Representative, The Race Around: “Since the beginning of this adventure, the objective of The Race Around has been to put competitors at the heart of this project. This required the careful selection of host cities, the most important element is that of the safety and integrity of the course but cities must also correspond to the needs of our commercial partners and our competitors commercial partners. We have time on our side, we’ll look to confirm our choice of start city within the coming months. We must adapt and understand the political deadlines provided by the many mayoral elections before jumping into this. Key to the relationship will be the signing of a multi-edition agreement.”

As with any high profile around the world yacht race The Race Around aims to deliver competitive racing alongside a program minimising risk. Therefore a through qualification process will be important. The Transat CIC (departing Brest on May 10, 2020) will mark the first qualification race.

The organisation will require its competitors to complete a predetermined number of miles within a racing scenario and within the configuration they wish to compete. Full details will be defined within the Notice of Race.