After 24 hours of racing from two starting lines off the coasts of Newport and Norfolk, the four teams entered in the Spirit of Bermuda Charity Rally have made solid progress towards their common finish line in St George’s. According to their onboard YB satellite trackers, all have just exited their transits through the turbulent Gulf Stream, the strong current of warm water that meanders northeast just off the continental shelf of the US east coast.

While varied in direction – easterly on the North leg and southeasterly on the West leg – the wind strength appears to be similar for all teams at 8-10 knots.

Taking an early lead on the North leg is Alessandro Pagani’s Spirit 47 Luna, which he is sailing with his double-handed team mate Anthony Johnson. While shorter and rated slower than their leg rival, Hank Schmitt’s Swan 48 Avocation, Luna appears to have simply sailed less distance up to this point in the race, and the two are converging quickly as they exit the south edge of the Stream. Luna looks well-positioned to catch a favorable southeasterly push from the Stream over the next few hours.

On the West leg, the larger and faster Swan 59 Icebear, skippered by Sean Westoby, has legged out well ahead of her smaller and slower leg rival, the Swan 48 Isbjorn skippered by Vincent Matiola. Both are facing headwinds now on their southeasterly tracks out of the Stream, but the northeast quadrant of a cold-core eddy directly in front of them may also impede their progress for the next several hours.

YB trackers show the positions, tracks and wind fields on the North and West legs of the course. This image is from 13 EDT today, 22 hours into the race – Spirit of Bermuda Charity Rally – photo © Sailing Yacht Research Foundation

For the next 24 hours the wind is forecast to maintain strength but shift ahead to the southeast for the North leg competitors, and shift to the south and lighten for the West leg teams.

Race director Larry Rosenfeld of the Sailing Yacht Research Foundation (SYRF) is not only monitoring progress of the teams in real time, but is also using each team’s ORC certificate polars, the wind and current data from the legs, and routing software to determine each team’s optimized route to the finish. Comparing this to the actual route forms the basis of the SYRF Offshore Scoring System methodology that is being used to score the race.

“It’s a little early to tell, but so far it looks as though most teams are following the optimized routes pretty closely,” he said. “The change in conditions as they traverse south of the Stream will be interesting, I’m looking forward to seeing how they react.”

Having punched through the Gulf Stream early yesterday but now facing light air and headwinds, the fleet on both legs of the Spirit of Bermuda Charity Rally have made slow progress in their second 24 hours of the race, organized by the East End Mini Yacht Club (EEMYC) and the Sailing Yacht Research Foundation (SYRF). 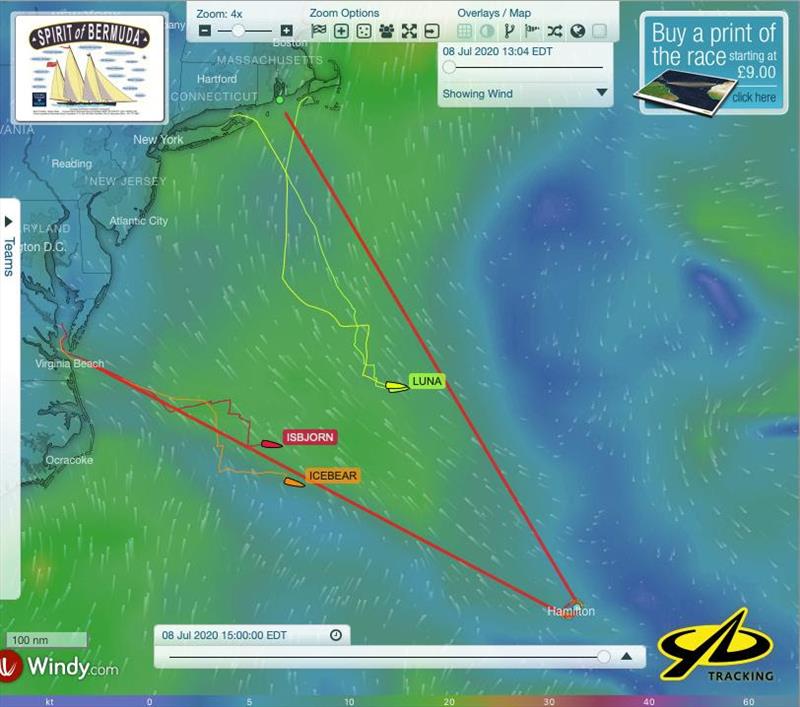 At 1500 EDT today the two entries on the West leg – the Swan 59 Icebear, skippered by Sean Westoby and the Swan 48 Isbjorn skippered by Vincent Matiola – have managed only 102 and 97 miles, respectively, towards Bermuda since this time yesterday. The two are sailing generally in about 8-10 knots of southeasterly breeze, on a track to remain just north of a field of very light air that lies just south of their rhumb line course to Bermuda.

At 1500 EDT Icebear had 353 miles and Isbjorn 393 miles to go to the finish line just outside Town Cut at St George’s.

Of interest to Bermudians is that Isbjorn is on a bit of a homeward journey: this boat was first owned by prominent Bermuda-based offshore yachtsman Warren Brown and named War Baby, one of numerous boats Brown owned with this name over the decades he was active racing and cruising around the world. Before his passing in December 2014, amongst his many acts to help promote Bermuda’s sailing culture was being a supporter of the Bermuda Sloop Foundation (BSF), the charity being supported by this race.

As BSF’s Alan Burland explains, “We have some great trophies for this race, and are able to use one donated to BSF by Warren Brown, Sr from a race he won on War Baby in Monaco in 2003. We are renaming it the Colin Clarke Memorial Trophy for the father of fellow Rally organizer Mark Clarke’s father who was a founder of the EEMYC and a sailing advocate. It will be awarded annually to the overall winner of The Spirit of Bermuda Rally.”

Meanwhile on the North leg yesterday brought some excitement for the double-handed team on Alessandro Pagani’s Spirit 47 Luna, who reported they chose to use their engine to motor away* from a nearby waterspout they encountered in the Gulf Stream. They are currently locked in a boat-for-boat battle with Hank Schmitt’s Swan 48 Avocation.

“All is well on Luna,” reports the team. “Navigated around several squalls and now the wind has freshened to 14-16 kts. You should have received a report of motoring for 55 mins when wind died below 5 kts last night.

“Forecast looks like it will be an upwind slog for the next 300 nm! You’d be happy to know we are in visual contact with Avocation, only 4 nm NW of us!”

*Since the Rally is using the SYRF Offshore Scoring System and able to score the teams by only their miles sailed, motoring is permitted so long as the transit times are reported to the race directorate. This clever scoring feature is thus able to have the teams meet their preferred times to arrive in Bermuda despite light air or other factors that might otherwise impede their progress.

To follow progress made in the Spirit of Bermuda Charity Rally, visit the event website at spiritofbermudarally.org.