The 1968 Sunday Times Golden Globe Race made history delivering the first ever solo non- stop unassisted voyage around the world. Nine started, one finished, one died, one boat was lost. The legend of this amazing adventure was born.

It was not a race like the America’s Cup. It was a challenge and display of the human spirit. A testament to human courage in the face of extreme challenge, great isolation and relying on one’s own ability to get the job done no matter what. It was also a great feat of seamanship, borne from experience, mixed with large amounts of common sense.

The objective was simple. Get around the world by yourself and don’t stop. The planning was not complicated, Bring food! Neither was the preparation if you knew what you were doing. Learn to navigate! The execution was also uncomplicated, just incredibly hard. Get to the finish!

In 2014 I had the idea of trying to recreate this event that was part of my life for 40 years. Sir Robin Knox Johnston, the only finisher in 1969 is one of my boyhood heroes. In 2018 the Golden Globe set off again for the first time in 50 years. It could never be identical to the 1968 edition for many reasons, but we held true to the core principles. It was a success in the eyes of those who understood the challenge.

Like the first edition, the 2018 Golden Globe was a game. The rules are set. Entrants decide if they want to play and volunteer to be part of that game. 18 set out, five finished, four boats were lost. The legend was back. It was life defining and life changing for entrants and many followers. Some not for the better. It was an extreme challenge that for players hits the core of who you are and what you believe in, even why you exist. Most are proving something to themselves. It was not an answer to the meaning of life, but it sure tested them and even followers around the world. Some entrants were shocked by the experience and still are to this day. It was not to be what they expected, even after years of preparation. But that is the name of this game.

The GGR is as tough as it gets. You can make up your own mind on that. All the sailing races around the world make this claim, but look closely at the GGR before you brush it off as a throwaway line. Start with 8 months of isolation and work it back from there.

The game has real risk, the biggest attraction to players. It’s harder and more excruciatingly painful that even entrants imagine. Don’t try to think about that issue too long! It is hard to grasp, but it is.

In a game of cards, you use skill, chance and luck. Most understand that in the GGR you can make your own luck through good planning, preparation and then seamanlike execution. But you still need luck. That wild card is the same today as it was in 1968. So too, the feeling of the players when they finally get a GREEN CARD to play the GGR game. They dreamed of that moment and finally the game is on!

The GGR game recreates an important element from the 1968 Golden Globe. Bernard Moitessier sailing JOSHUA had no radio. Just a slingshot and flashing light to pass messages to the world. He sailed through the Canaries looking to pass messages, then down to Trindade Island in the South Atlantic to do the same, unsuccessfully. He made for Cape Town twice, firing his messages and film cannisters to the deck of anchored ships. In Hobart he waited hours for a passing fishing vessel to take his letters to the Royal Yacht Club Tasmania.

Robin Knox Johnston sailing SUHAILI had a radio, but it failed. He sailed up into Victoria, Australia to pass messages to the pilot vessel and arrange a message drop in New Zealand. He anchored in Dunedin New Zealand, waiting for his contact to arrive with letters from home. Under the rules of the game, they could not be delivered. They were opened and read to him from a boat alongside. This was the game in 1968. 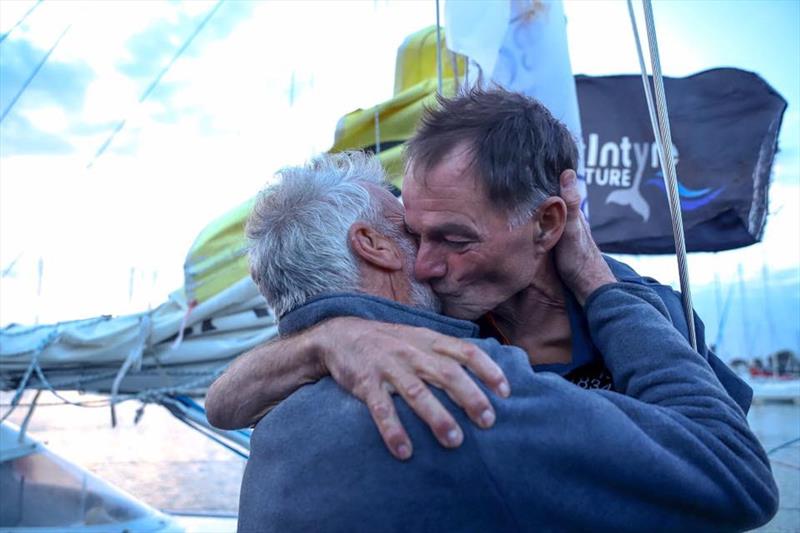 The 2022 GGR game is the same. Players must drop letters and films at Lanzarote in the Canaries. They leave Trindade island in the South Atlantic to port. They drop letters and film in Cape Town and stop in Hobart Tasmania exactly the same as Moitessier. Instead of New Zealand we have Punta del Este in Uruguay.

Sh*t happens in life just the same as accidents. There are always reasons for them and we learn from them. Sadly, Guy deBoer sailed his yacht SPIRIT straight up onto rocks a few hours after rounding the GGR film drop mark in Lanzarote. Fortunately, he was not injured and was able to walk ashore. He did not drift there and was not trapped on a lee shore unable to sail off. He had all the charts and navigation equipment to know exactly where he was. There were lighthouses clearly visible. The weather was mild and sea state low. It was night and visibility was good. He has not yet explained exactly what happened, but we know it was an accident.

Accidents will always happen in any game and on any ocean.

In the GGR game you must listen only to cassette tapes. You can only use HF SSB radios. You must use wind up clocks. For safe navigation, it is not a game. Players have every device and skill you need to know where you are, all the time, giving you all the information needed to act in a seaman like manner, all the way around the world and NOT hit rocks on the coast. There is also an emergency GPS if needed. This is an explanation for those not familiar with the rules of the GGR game, NOT any criticism of Guy deBoer. Some may now think following Guy’s accident that the GGR rules put entrants at risk. They do NOT!

All skippers in this game are responsible for their own wellbeing and the safety of their ship at all times. None are forced into unsafe practices because of the game. The challenge and difficulty are obvious to entrants who love facing that. They alone make the decisions on how much sleep they need, what course they sail and when to give up. This point runs to the core of why they are doing it and why they love it. There will be winners and losers in any game. But the GGR game itself is safe. Maybe safer than your own day to day existence and the risks you face without even knowing it.

Accidents happen to us all. Even in cars. It happens in, motor racing, mountain and ice climbing, parachuting, motor cross racing, glider flying, helicopters flying, trike flying, gyrocopter flying, scuba diving, Antarctic expeditions, open boat expeditions. Same too in solo around the world yacht and mini solo transatlantic yacht racing. I know, as I have done them all. I accepted the risk and did everything to mitigate them before the event. I used my best value judgments in every decision I ever made during the activity. Maybe I was lucky? I have never had an accident (touch wood), but I was always happy to play the game as a volunteer and feel truly alive and satisfied with my life.

Jane and I are very proud of the GGR and the GGR family around the world that helps make it what it is and what it stands for. A chance for any sailor to play the game. The GGR gives followers something to dream about, a display of the human spirit in all its Glory. We are very proud of all the entrants, including GUY, who follow their dreams and do everything they can to live life. Without a spirit of adventure and responsible risk takers, the world would be worse off. Thanks for following the GAME!