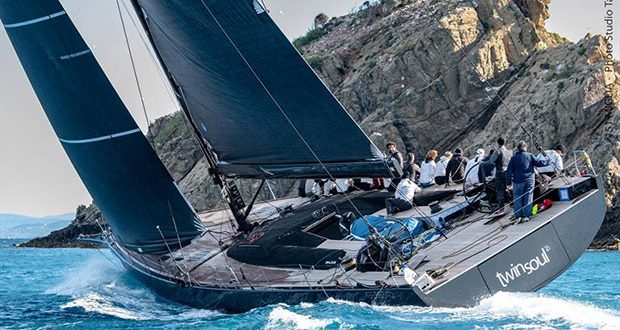 After a challenging night at sea, early this morning the 100ft maxi ARCA SGR was first to cross the finish line off Punta Ala to take line honours in this 12th edition of the 151 Miglia-Trofeo Cetilar. This is the third event of five in the International Maxi Association’s 2020-2021 Mediterranean Maxi Offshore Challenge, following the Rolex Middle Sea Race and the recent Regata dei Tre Golfi.

As usual the 151 mile course took the boats from the start off Livorno, north to a turning mark off Marina di Pisa, southwest to the Giraglia rock off northern Corsica, then southeast to a southerly turning mark at the Formiche di Grosseto rocks before returning north to Punta Ala.

The Trieste-based maxi ARCA SGR, campaigned by pro sailor Furio Benussi, finished at 6:37:09 CEST this morning to collect the Challenge Trophy for being first home. ARCA SGR’s elapsed time of 15 hours and 42 minutes was just under two hours outside the blistering race record of 13 hours, 50 minutes and 43 seconds set by George David’s Rambler 88 maxi in 2019. 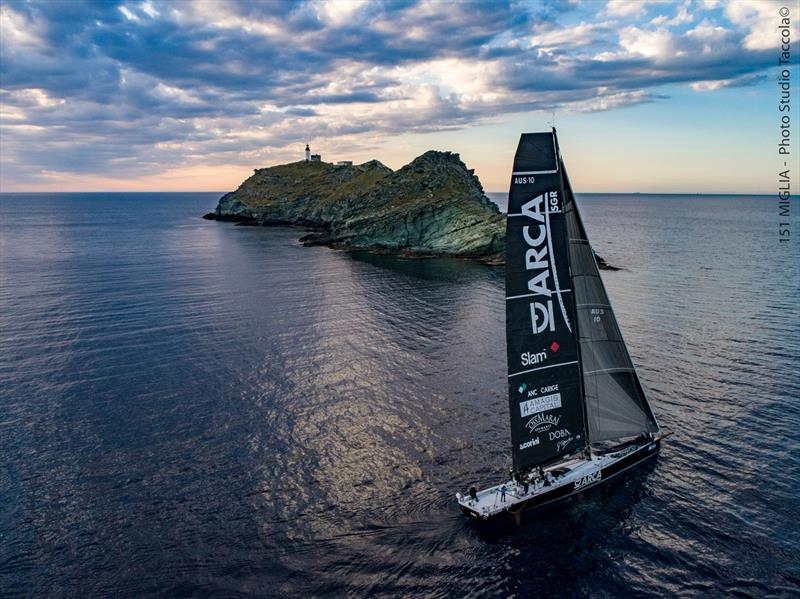 “I am very satisfied with the results, the performance of the boat and with the crew’s effort,” said Benussi, who sailed as helmsman and skipper with a crew including top sailors such as tactician Lorenzo Bressani, Nacra 17 Olympian Vittorio Bissaro, Stefano Spangaro and Andrea Caracci.

“Winning line honours in the 151 Miglia was one of our goals and part of a bigger project,” continued Benussi. “My congratulations go to organisers of this wonderful event. The race course is simply magic.”

As racing in the 151 Miglia-Trofeo Cetilar has proved time and again, minimising losses proved more important than maximising gains on a race course notorious for its complex land-sea breeze interactions and wind holes. Benussi said ARCA SGR encountered two of the latter. The first of these, off Giraglia yesterday evening, lasted three hours, roughly one fifth of their elapsed time. 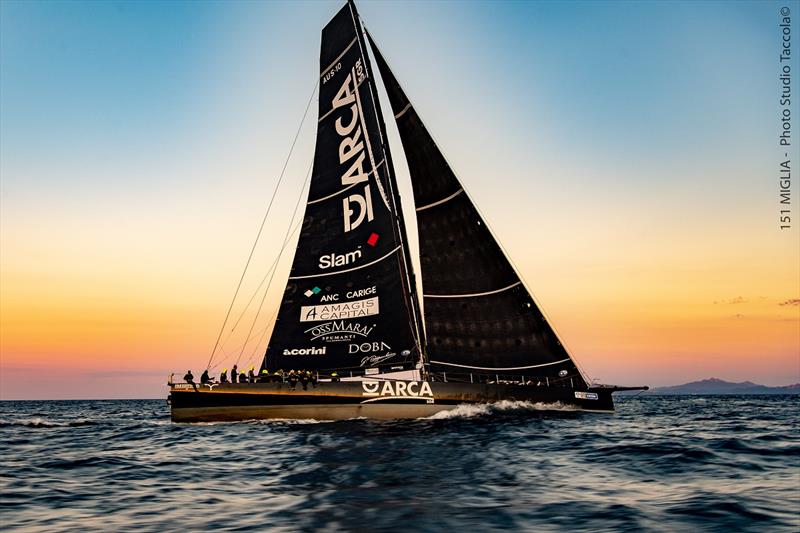 “When we managed to get away, it was like a restart!” he continued. “The second shutdown was at Sparviero [the island immediately off Punta Ala]. At roughly 0500 this morning, the wind went from 20-22 knots from 70 degrees to…nothing, no wind at all. We lost some 40-50 minutes there.”

Benussi said that up until Formiche di Grosseto they believed they were still in with a chance of breaking Rambler 88’s record.

Tactician Lorenzo Bressani added: “This was my very first 151 Miglia-Trofeo Cetilar and of course our goal was to win line honours and to break Rambler 88’s record.” Bressani, a former Melges 24 and 32 World Champion, echoed Benussi’s thoughts about the race, saying that the crew had been ready for very variable conditions, with winds ranging from zero to 25 knots. “The most stressful part was at sunrise on the last leg between the Formiche rocks and Punta Ala. I am very satisfied with the boat’s performance.”

After the Giraglia park-up another area where the leaders were held up was immediately to the west of Elba. While ARCA SGR made the best passing of this island, at 0200 this morning the trio chasing her – Pendragon VI of new International Maxi Association member Carlo Alberini, Mylius Yacht’s President Luciano Gandini on his Mylius 80 Twin Soul B, plus the canting keel Mylius 60 Guido Paolo Gamucci’s Cippalippa X – were all pointing in directions more than 90 degrees to their desired southeasterly course.

Twin Soul B was first to break free. Having done well to stay north beforehand, she made a big dive south where she was able to key into breeze before her rivals. “That enabled us to get a good advantage on the rest of the fleet, including Pendragon and Cippa Lippa,” explained Gandini of the extreme moves demanded by tactician Roberto Pardini and navigator, Mauro Montefusco. “We had carefully studied the weather forecasts before, but we were also lucky.”

From here Twin Soul B managed to hang on to her advantage, finished second on the water just under two hours after ARCA SGR in an elapsed time of 17 hours 37 minutes and 42 seconds. This was a strong performance from Gandini’s crew as although Twin Soul B is the second longest boat in the 151 Miglia-Trofeo Cetilar, she is essentially a fast cruiser rather than a thoroughbred racer. As a result, while other maxis have still to finish, Twin Soul B is looking likely to win the 151 Miglia-Trofeo Cetilar’s IRC Over 60 (maxi) class under IRC corrected time, for which Gandini will receive the International Maxi Association Maxi Trophy.

“My congratulations to the organisers – what a wonderful race this is!” Gandini concluded. 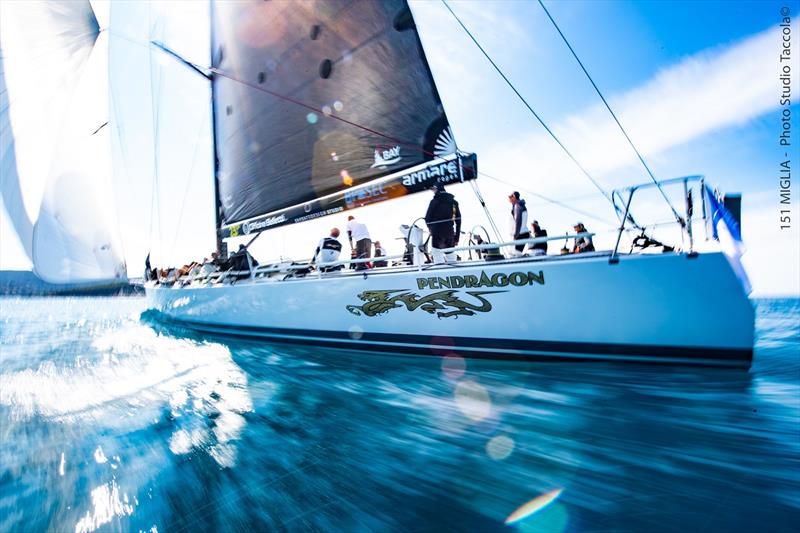 “My thanks first of all to Roberto Lacorte and to the Race Committee,” said Alberini. “The race was very well organised and, even if the start was delayed for about one hour when the wind changed twice as it went through 180 degrees, we had good fun. We started in a very good position, immediately behind ARCA SGR, but then unfortunately we fell into the wind hole off the Giraglia, like the other boats, and we parked there for two to three hours. Then we found another wind hole off Elba. Here Twin Soul B made a very good strategic choice, a different strategy to us, and this won.”

From here the maxi fleet continues on to the Rolex Giraglia (due to the pandemic, starting this year from Sanremo on 16 June, and finishing in Genoa) before the Palermo-Montecarlo, starting on 21 August, concludes the 2020-21 IMA Mediterranean Maxi Offshore Challenge.

Progress in the 151 Miglia-Trofeo Cetilar can be followed on the yb tracker.