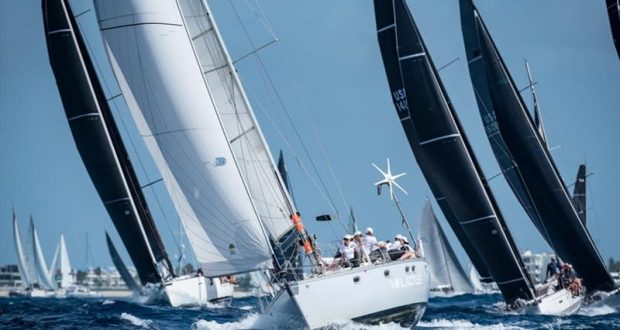 From the earliest beginnings of yacht racing, one of the most controversial aspects has been the creation and implementation of rating rules.

The idea behind rating rules is to “level the playing field” by handicapping the fleet so a wide variety of yachts can compete fairly and equitably with one another.

Elsewhere in the watery world, rating rules come and go. But not in the Caribbean, where the longstanding CSA Rule (so named for the Caribbean Sailing Association) has been in operation for decades. It’s the rule under which the St. Maarten Heineken Regatta is contested, and one of the reasons the close, tight racing has always been the reason it attracts so many dedicated competitive sailors. And it will once again be the rule of choice for the 40th edition of the regatta, which this year takes place from March 5-8.

“I am always fascinated looking at results in some races (under the CSA Rule) where a few boats come within seconds on a standard race,” said naval architect and CSA Chief Measurer Bastien Pouthier. “The CSA Rule is actually a very old rule, I mean 60-plus years old. A retired British fighter pilot designed a mathematical formula to be able to race between friends fairly. Obviously, the rule has been developed and updated yearly, with a number of major revamps in between.”

Pouthier said part of the reason for the CSA Rule’s success is that it was especially developed for the ideal Caribbean weather, “and was optimized for the conditions we encounter here, steady 15-knot trade winds.” He explained that the Rule was designed for displacement cruiser/racer-type yachts, the majority of Caribbean race boats, but also works well in varying breezes and with today’s lighter displacement flyers. “I am convinced that the CSA Rule works the best for our Caribbean events like the St. Maarten Heineken Regatta. We can get a new entry and within 2 hours of measuring and 15 minutes of inputting our software, we can get them racing. No other rule can deliver that.”

With regards to the fleet in the 40th edition of the St. Maarten Heineken Regatta, Pouthier said to keep an eye on the boats in the middle size ranges. “The Performance Classes between 35-feet and 48-feet, typically split into two (divisions) by rating, are amazing classes. These are the boats that will travel around the Caribbean to many different events and will fight repeatedly on the racecourse. The St. Maarten Heineken Regatta will be a highlight of the season as it has been many years in the past. Of course, the 40th will be a special one!”

The CSA Rule is actually four rules, to cover monohulls, multihulls and classic yachts. As Chief Measurer, Pouthier has final say on matters, but he also oversees an impressive team that also consists of specialist Chief Technical Officers for the monohulls and multihulls. The CTOs are trained yacht designers with vast experience in designing, building and racing yachts, and who work with an impressive group of 15 other measurers who also are hands-on, veteran racers and cruisers.

Pouthier himself is a lifelong sailor whose career began in Normandy, France, racing Optimists in the Channel Sea. By 18, he became a sailing instructor and began his studies in engineering, with the notion of becoming a car designer. But he soon switched disciplines and matriculated to the famous Southampton Institute, which led him to a position in Trinidad as a naval architect. That’s where and when he not only got bitten by the racing bug, but also got involved with the technical aspects of the CSA Rule. And now he is in charge of overseeing it.

Pouthier passed along the following websites for those interested in learning more about the CSA Rule, or getting a rating for their own boat. There’s plenty of time to do so, and it’s fast and easy. And you DO NOT want to miss the epic 40th anniversary of the St. Maarten Heineken Regatta.

Here’s Chief Measurer Bastien Pouthier’s advice on how to get started:

There is a page on website that is informative: caribbean-sailing.com/csa-rules/get-a-csa-rating

You can also have a look at this overview here

Then, get in touch with the measurer present on your island. The regatta Organizing Authority and website lists the measurers on each island. The measurer will be able to advise you whether the boat must be emptied or can be measured in racing trim and will explain what these terms mean.