Only one race was possible on the first day in Helsinki, despite plans to sail two. The scheduled 12.00 start was delayed over two hours while the fleet waited afloat for a light sea breeze to build. Eventually something approaching a sailable breeze filled in over the race course and after a further short postponement for a wind shift, Race 1 got away. 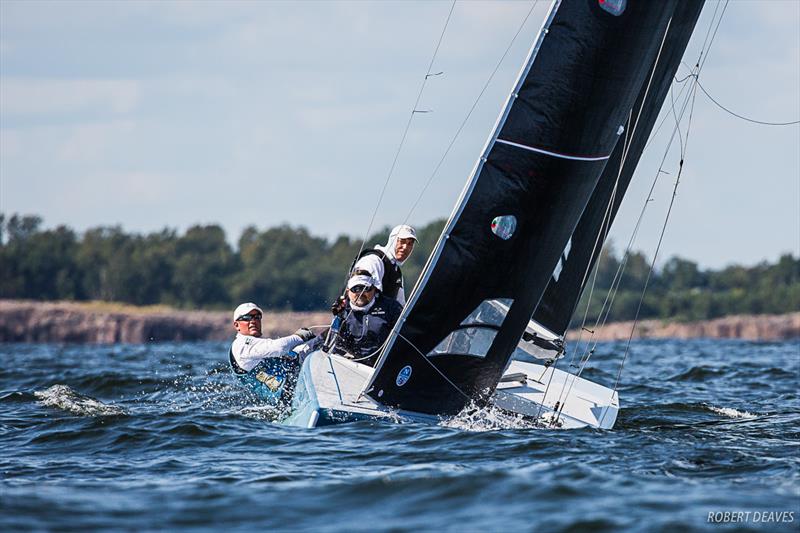 It wasn’t exactly a stable breeze with the pressure varying between three and eight knots and with lots of shifts and puffs across the course, but it was a breeze nonetheless, which some made better use of than others. Starting four boats up from the pin, New Moon immediately tacked off the line and played the shifts up the middle to round the top mark with a comfortable lead. Otto rounded second having gone further right, and the oldest boat in the fleet, Trial (FIN 4 Ville Harkke, Sami Ekblad, Pete Lindström), rounded third after going even further right.

New Moon had so much clear air, the race was almost theirs already and they extended to take a huge win. Otto initially dropped back, behind Caracole (SUI 214 Bernard Haissly, Nicolas Berthoud, Daniel Stampfli) and 5Billy5 (ITA 79 Hemming Hanses, Melker Lundberg, Isak Nordlund), but then recovered on the final beat as the wind went further right. John B crossed in third at the other end of the line just seconds later. 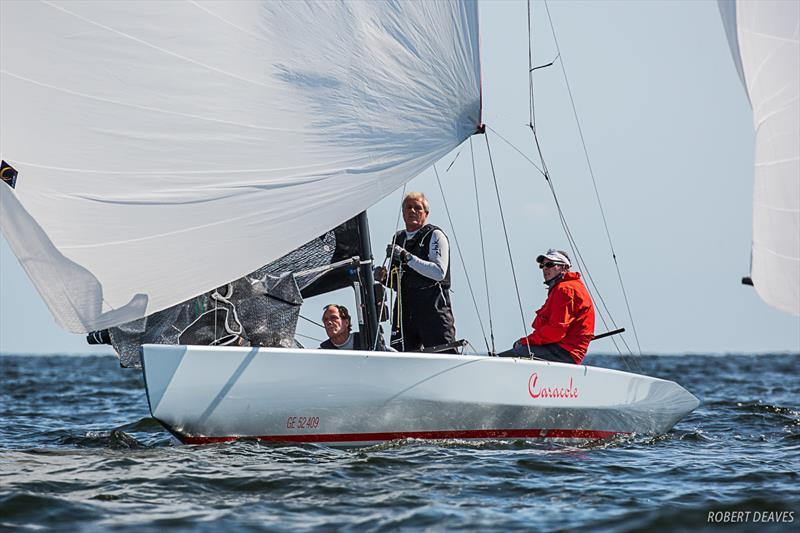 There were hopes a second race could be sailed but the wind was getting even more unstable and patchy, so the fleet was sent back to the club.

Christoph Burger, middle man on New Moon, “The wind wasn’t really meant to build to more than seven knots and at times it dropped down to three knots, with shifts and patchy parts on the race course. We managed to have a good start and played the shifts after that. A keeper for sure but it’s a long way to the end of the week.”

“Coming off the start line was a bit messy because you would see wind shifts right after the start and boats heading in all different directions. The key there was certainly to be no the right tack, and stay as long as possible but not to be shy to change that when you go into a big header or see some pressure elsewhere and have to go there. So I think staying in the middle playing the shifts, compared to some guys going really into the corners early, really paid off.” 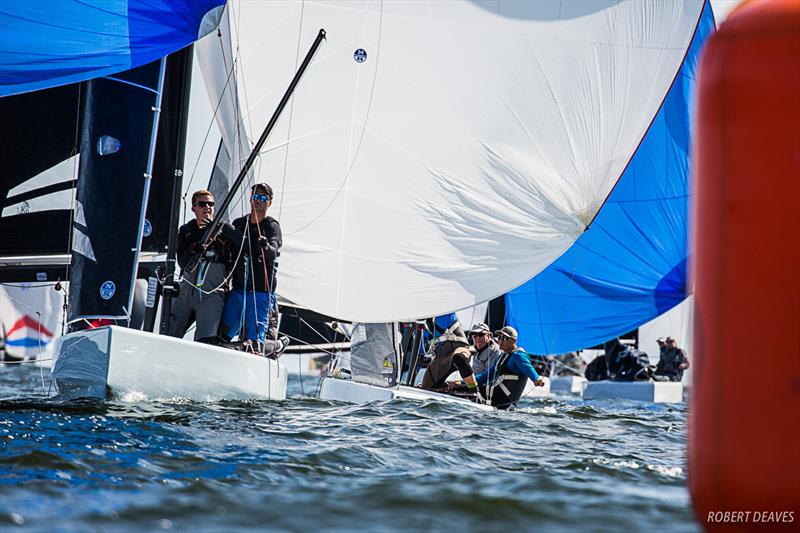 After a disappointing performance last week in the Scandinavian Gold Cup, New Moon has started the world championship in the best possible way. “We needed a few starts again and a few routine buoy roundings and tactics and talking to each other to each other in the right way so everyone felt comfortable. And we had a bit of a briefing yesterday evening and we went through the essentials that were important to us and we were quite confident that we could do it still and we proved that today, so we are on a good track.”

The fleet boasts one of the largest fleets of Classic 5.5 Metres to be found in recent years with no less than 10 on the start line. The oldest, Trial, dates from 1951.

Ville Harkke, skipper of Trial, explained their race. “We had a not so good start and realised the entire fleet was going the wrong way, tacked immediately and took the right side of the track and ended up rounding the first mark in third along with the Moderns, so that was nice, and then we had a fairly consistent race after that, so I’m pleased.”

“All the forecasts said that the wind will turn right. I can’t understand why the fleet went the wrong way, but, OK, my tactician was perhaps bolder than them.”

Trial has been in Finland since being built, by L. Wilenius, in Porvoo, to the east of Helsinki. Harkke said, “The boat was originally built in 1951 to qualify for the Helsinki Olympics [in 1952]. She didn’t. She was second in the qualification races and she has been sailing in the Helsinki area until the late 1990s, and then deteriorated pretty badly until a few years ago we started a renovation project. The renovation was finished in 2017 and this is the third season of her new life, and she appears to be pretty fast for one of the first constructions ever in the class.”

Harkke has only been sailing 5.5s for three years. After previously sailing offshore boats such as Melges 24 and X99s, he says that 5.5s are more manageable.

“It is a wonderful class. It’s technical, the boats are beautiful and fast and as a project they are manageable. You can tow the boats with a car, so it’s a manageable sized project and great fun.” 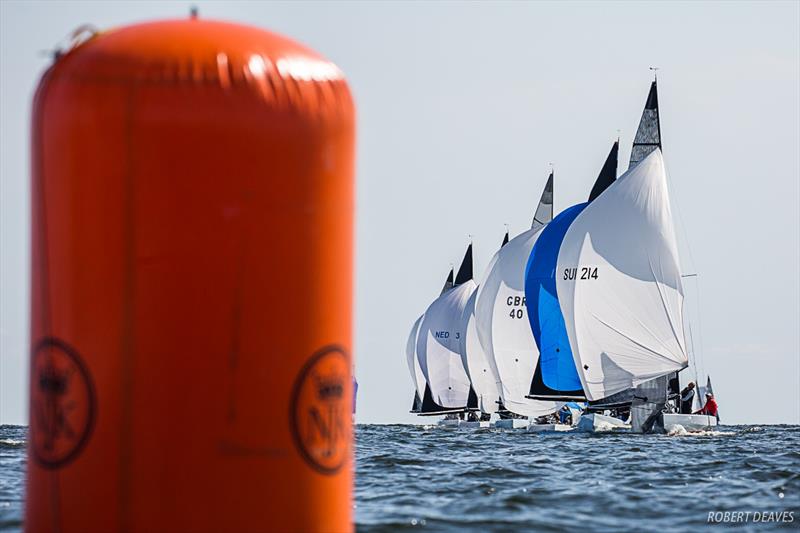 And a lot of other Finnish sailors clearly think the same with a growing Classic fleet across the country, of which eight are racing here this week.

“There are a lot of Classic boats in Finland right now. There are a number of renovations still going on; they didn’t get their boats done in time for this event, but, yes, we have a pretty nice classic fleet here in Finland.” 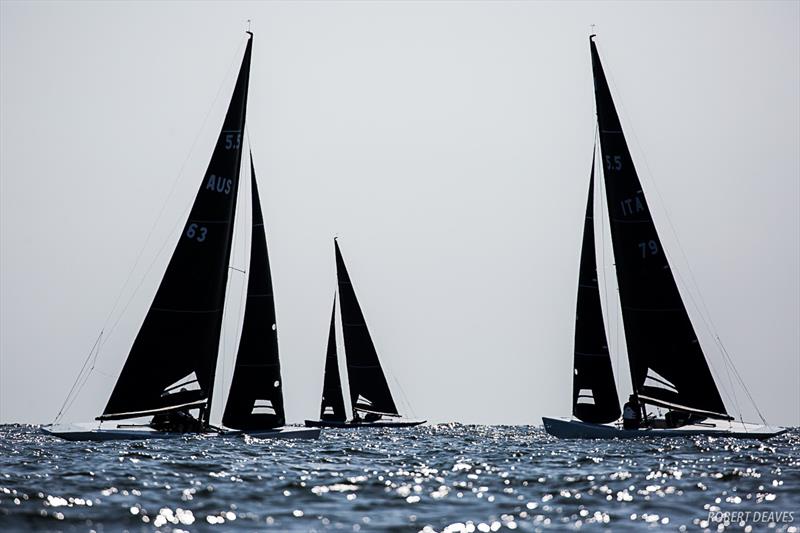 Highlights from Day 1 at the 2019 5.5 Metre World Championship in Helsinki, Finland

The prizegiving for the Scandinavian Gold Cup, the Hankø Evolution Cup and the Royal Kaag Classic Cup took place on Sunday night on the lawn of the Nyländska Jaktklubben overlooking Helsinki. 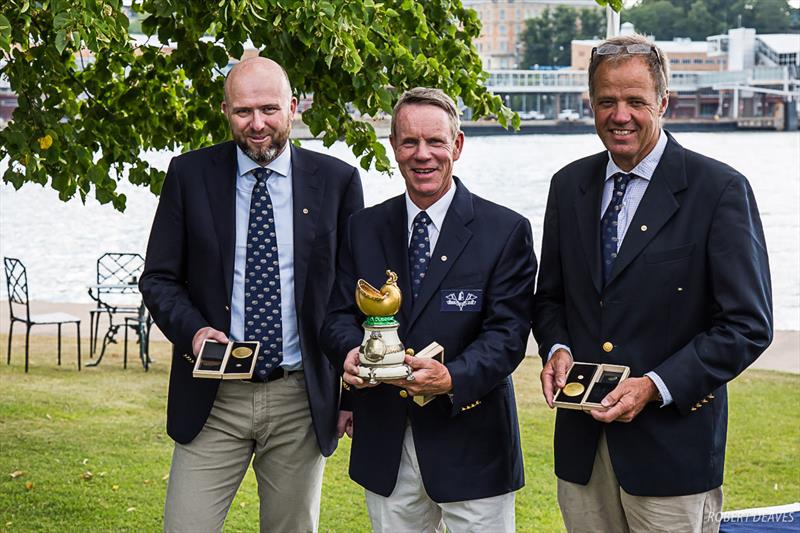 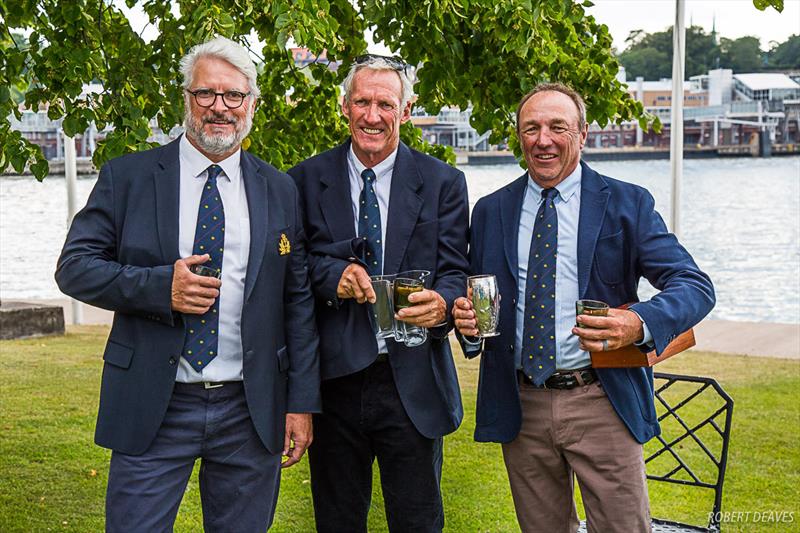 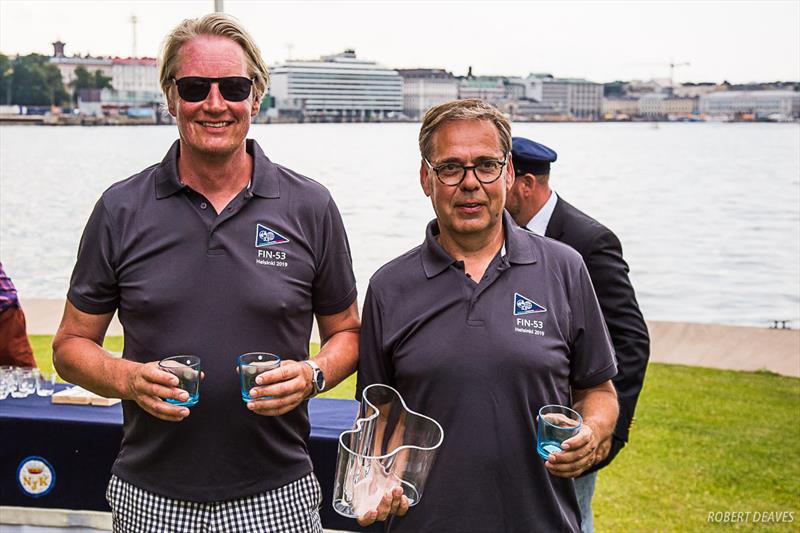 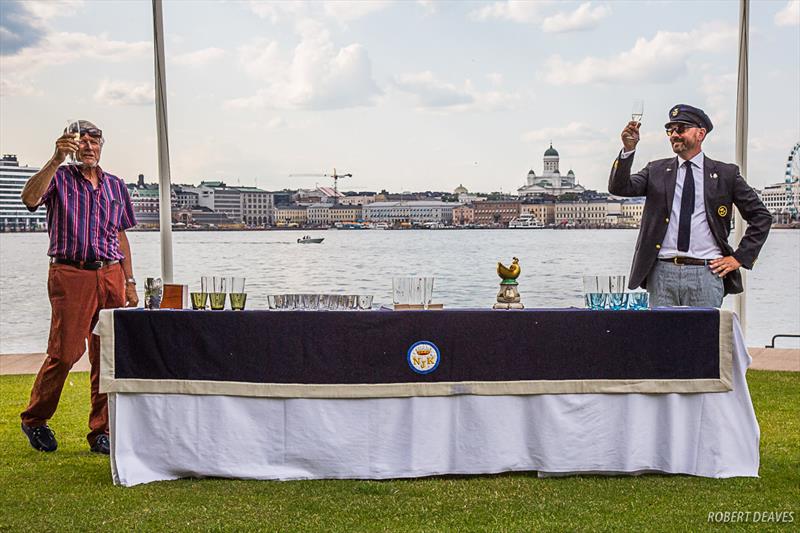