The Doldrums of Bishop Rock may today have slowed and frustrated the fleet racing La Solitaire URGO Le Figaro second stage from Kinsale to Roscoff via the Needles Fairway, but the leading trio look set to be rewarded for their guile and hard work.

The ensuing 200 miles passage up the Channel to the turning mark to the west of The Needles looks set to give an advantage the pacemakers in the long term.

The top group did not get off lightly, slowing as they approached the lighthouse at the Scilly Isles, the first mark of the 535 miles course. They had eked out a decent cushion – some 15miles – on the second group, but half of that was conceded again to the chasers. 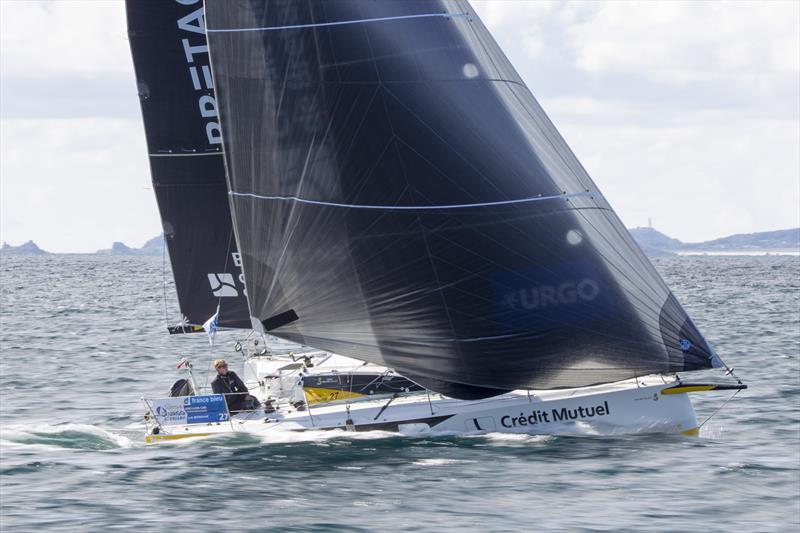 But while the leaders will initially push against the tidal current, they should break in to a stronger, more established northerly wind flow which should propel them all the way along the English coast to the famous Isle of Wight landmark.

Gybing down the rhumb line to Bishop Rock in the small hours of the first night since leaving Kinsale Sunday, the leaders were absolutely locked to inshore regatta mode. Richomme confirmed that any big picture strategy was less important than gybing to be constantly sailing the most direct, profitable angle towards the waypoint.

“We really had not made a gennaker leg like this all together like that and so it was great to see what everyone else was like, sailing different angles,” he said of the express departure from Kinsale yesterday. “But now the problem is that I don’t see anyone. I see Adrien (Hardy) and Alexis (Loison) but I don’t see anyone else and don’t know what my ranking is.”

That became clear as double La Solitaire winner Le Cléac’h led in and out of the eastwards turn at Bishop Rock. This afternoon the leading trio are within a few hundred metres of each other with a gap of over half a mile to fourth place. Between sixth and seventh there is a six-mile margin.

Briton Will Harris (Hive Energy) is well placed in this second group at about 10 miles from the leaders but less than half a mile from seventh placed Xavier Macaire. Harris, in just his second La Solitaire, was going well in the first stage of this race until his wind instruments failed. He made the wrong tactical choice and finished 28th overall, eight and a half hours after the winner.

“I only had a compass and that made it bloody useless for me the whole way when it was shifty. But I am pretty quick I know. I was with good guys all the time like Yann Elies and Jeremie Beyou. When they went west and I had wanted to go west why would I have done anything else?” Harris, who won the top rookie award in 2016, said before leaving Kinsale. “I am a long way out of touch and I just have to refocus and get some good results. I am definitely fast enough, the speed is there. I need to make the right choices.” 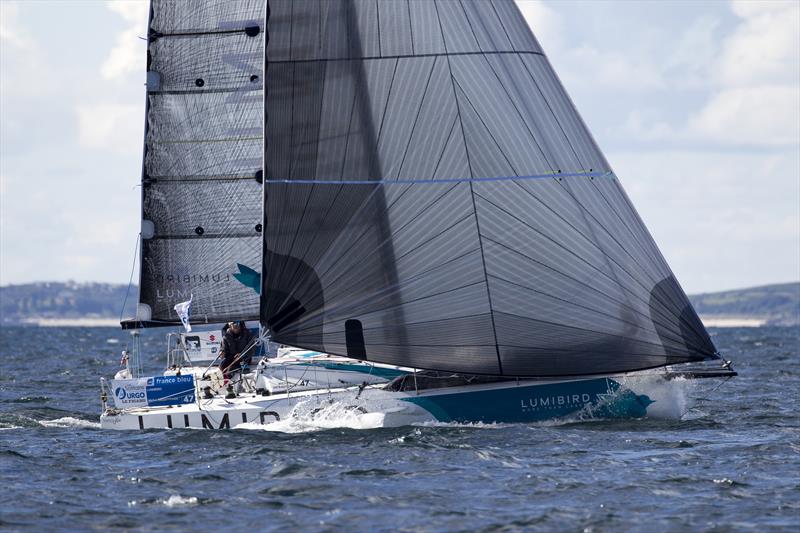 Harris was relishing the chance to race back in the Channel again and this evening was in good company, half a mile behind eighth placed Beyou (Charal) and Michel Desjoyeaux (Lumibird) who was 12th – both three times winners of La Solitaire. Harris’s compatriot Alan Roberts (Sea Cat Services) is 17th.

Alan Roberts said this evening: “It was a tricky start to the race with lots of clouds and rain showers, plus very unstable winds making it very tricky with boats getting ahead. We found ourselves behind a leading pack which has several miles of advantage on the fleet, and so it will be difficult to catch them. But there is a lot of race left.

“There has been no time to sleep really. Last night you had to be on the helm constantly trimming and helming and changing the sails, so it was tricky. So hopefully we will get a sleep before the south coast of England and before a good breeze comes in. It will be a windy beat up to the Isle of Wight, but hopefully quite flat water with a northerly breeze blowing straight off the shore. We will be going in a straight line so not much tactics. There will be the tide at the headlands like The Lizard and maybe a bit in to Weymouth,” Roberts summarised. 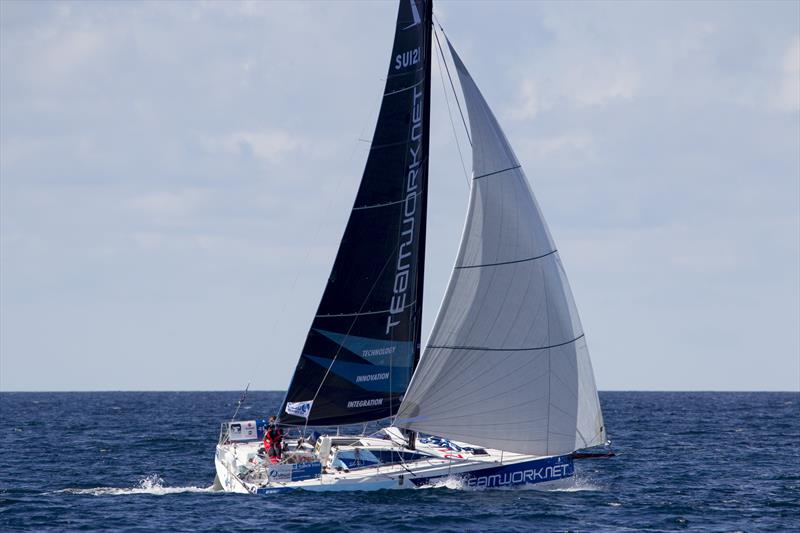 Cassandre Blandin (Klaxoon) and Gildas Morvan (Niji) did not start the second leg. Alain Gautier and Benjamin Schwartz collided on the start line yesterday and both abandoned and are heading to Roscoff.