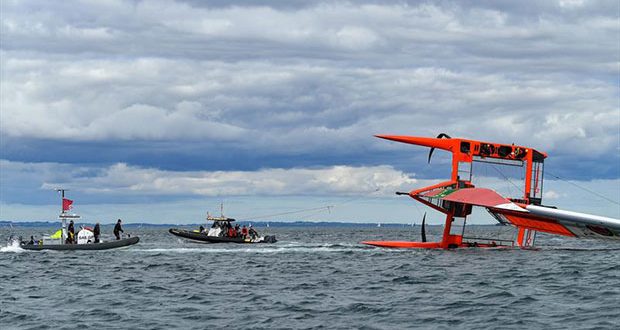 The day got off to an eventful start when Spain SailGP split a foil during practice and possibly damaged a rudder. The damage was unable to be repaired before the start and they say out all three races.

New Zealand’s Peter Burling marked the return to sailGP after the Tokyo2020 Olympic Regatta, getting a good start and leading around Mark 1, sailing in 13kts of breeze.

They dropped a place to Denmark on Leg 2, with Australia hanging around in fourth waiting for an opportunity. The fickle breeze saw Denmark drop from first back to 4th, with the New Zealanders leading on Leg 4 with Japan second and the British in third.

Nathan Outteridge (JPN) got between Burling and Mark 4 claiming the inside berth on Leg 4.

Japan got a favourable shift in the middle of the course getting a good run on New Zealand who were pointing at his transom. 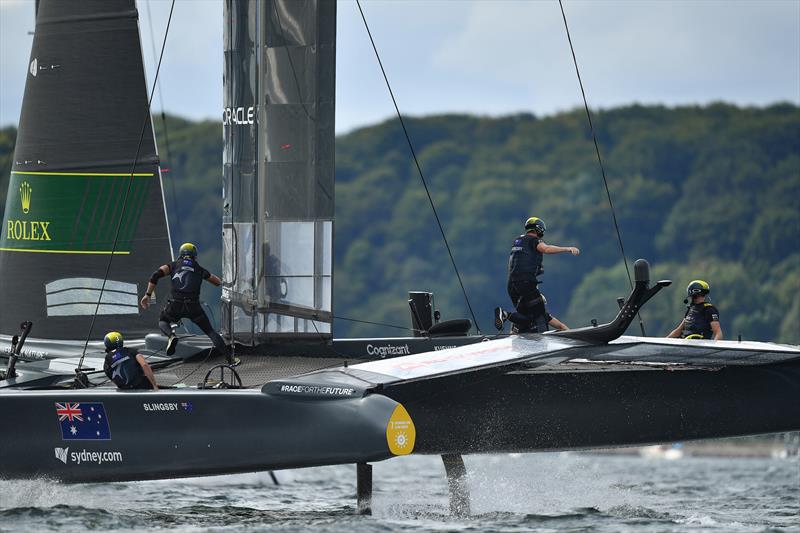 The breeze dropped at the top of the course and while Japan got away onto a good foiling tack they lost the shift, and Burling hit the front for a time before losing the lead to Denmark. Ainslie fluffed a tack, to hand the Danes the lead, and let Australian through into second with the Kiwis third in a jammed finish.

In Race 2, Australia and USA had all the early running after they sandwiched New Zealand at the start landing the Kiwis with a penalty.

At Mark 1 USA led by 3 secs from Australia with France 3 secs back in third. But Billy Besson (FRA) was able to negotiate the marginal foiling breeze to lead by 4 secs at Mark 2. They dropped the lead after being penalised for not allowing USA room to tack at the left hand boundary holding Spithill out for too long. The penalty dropped France back to fourth with Denmark coming through and Australia being a lingering threat.

Spithill defended a comfortable lead for the rest of the race, with Australia and Denmark fighting for second. Slingsby picked the right hand layline approach and cut inside Japan as Outteridge tacked, and dropped off the foils for a moment. USA won by 7 secs, with Japan 13 secs behind at the finish.

In Race 3, Burling and Ainslie avoiding engaging with a group pushing up towards the windward end of the start line, and the Brits led around Mark 1, with the Kiwis second.

The two picked the right angle on the first gybe at the boundary, and the British eased away to a lead of several hundred metres followed by New Zealand. 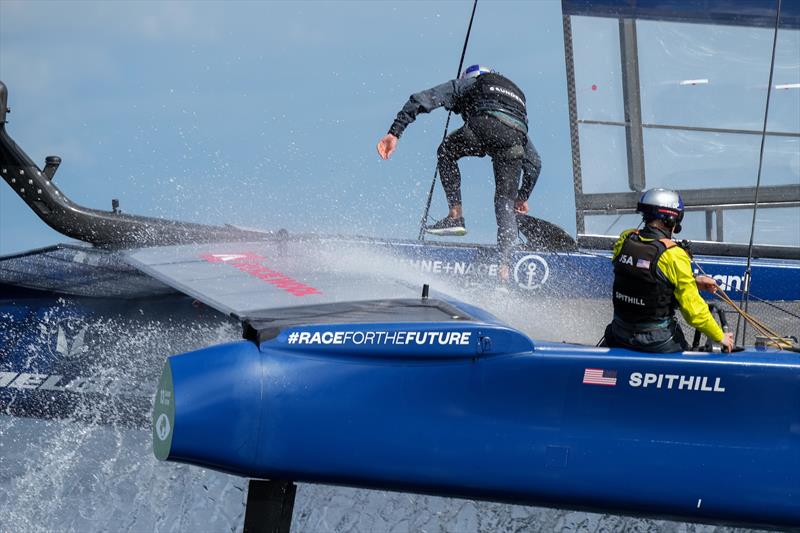 The French caught the Kiwis after Burling dropped off the foils during a tack for Mark 3, but the French were penalised soon afterward for failing to keep clear of New Zealand as they rounded the left hand gate at Mark 3, where the French were the windward and outside boat.

Burling held on to finish second behind the long-gone British, with Spithill finishing fast on the final mark, pulling through from fifth to take third at the finish. At the finish the Brits were 41secs clear of New Zealand, with the USA 7 seconds behind the Kiwis. 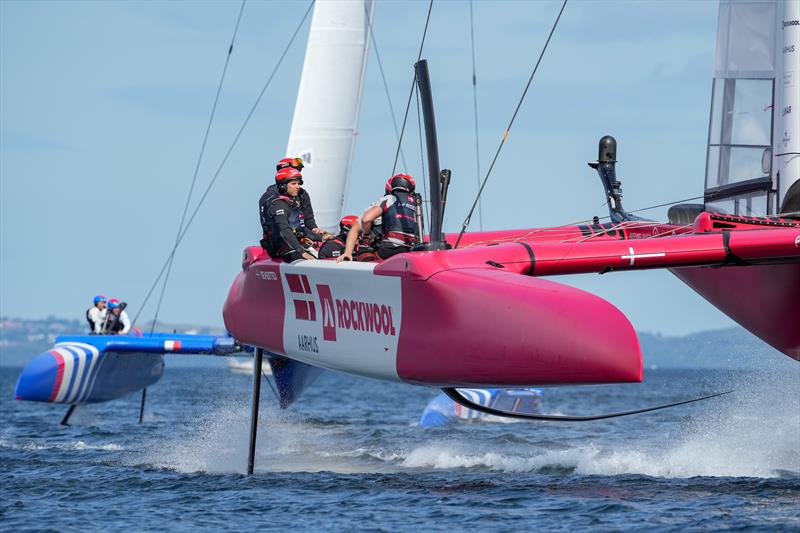 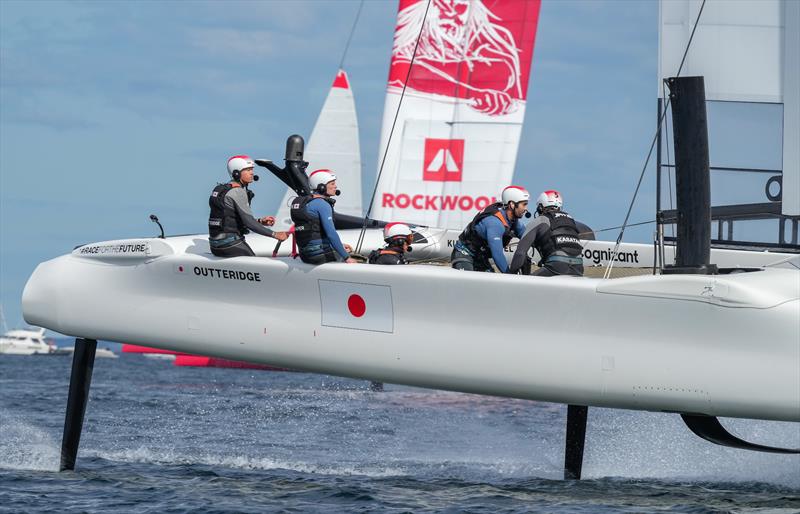 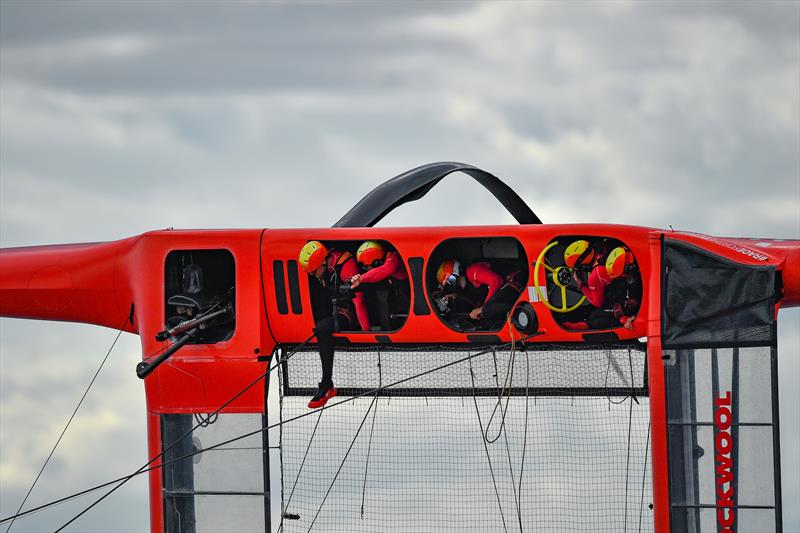 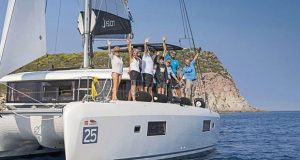 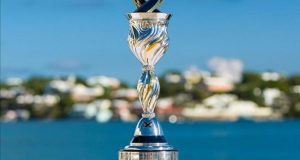 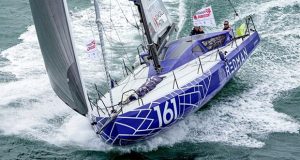 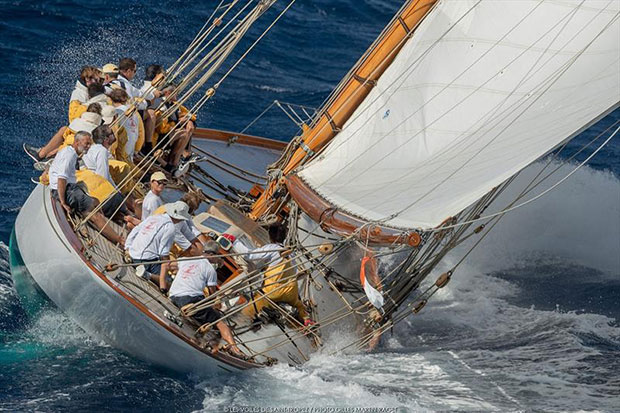