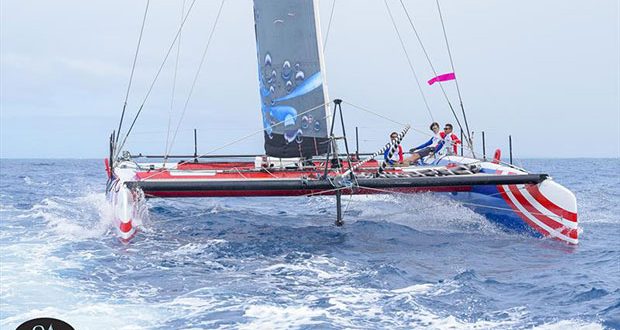 Day 1 of the Caribbean Multihull Challenge, sponsored by Yacht Club Port de Plaisance, is one for the books. Starting with lighter conditions than expected, the second race was sailed in a steady breeze.

While everyone was looking at a win from one of the big and fast racing machines, such as Nemo, Arawak and Jetwave Avalon, it was the smaller local boats that stole the show in the racing class, with Enola taking today’s win. People may think of the cruising class as an afterthought, however Aravilla/Maritime School West Indies and Seaduction proofed everyone wrong today as they battled it out in the crystal-clear waters surrounding Sint Maarten.

The Race Committee decided on courses that kept the participants on the leeward side of the island, sending the 6 racing boats to Marigot Bay and the 2 cruisers to Plum Bay and back for the first race. Beginning in about 12 knots of wind, the racing boats were started first. Le Tri, a 42 ft trimaran, was well positioned and crossed the line first, with Nemo, the HH66, hot on its heels. The boats sailed along Pelican Bay to the first mark where they jibed towards the next mark off Long Bay. At the first mark rounding Nemo had already taken the lead, swiftly followed by Arawak. The second leg of the race towards Plum Bay was a real tug of war between Arawak, Nemo and Jetwave Avalon, as the latter two sailed side by side for a while passing Mullet Bay, only to see Nemo take back the lead when Jetwave Avalon blew its spinnaker. Arawak caught up before the rounding at Plum Bay and was briefly in the lead, when Nemo lost its momentum putting away the screecher. This didn’t last long as Nemo quickly accelerated upwind and got into Marigot Bay way ahead of Arawak and Jetwave Avalon. 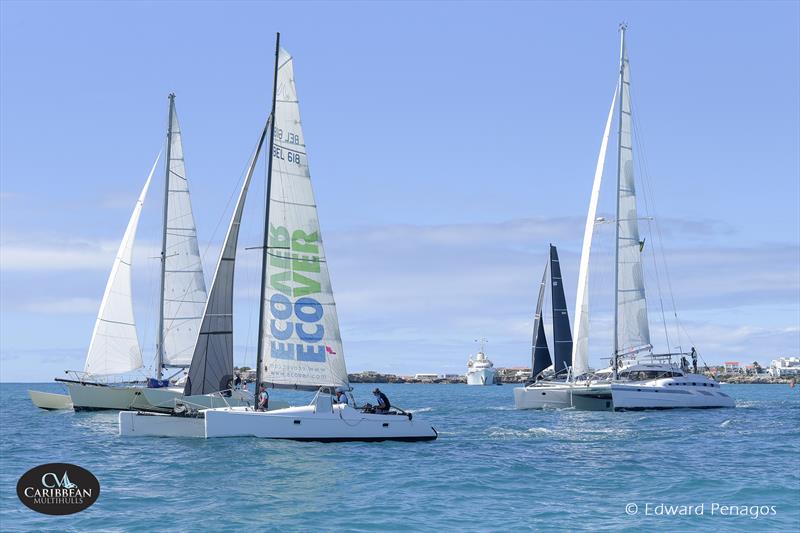 “We were doing fabulous, making excellent speed, even keeping up with Nemo. At one point we were doing 18 knots, which caused for all sorts of mayhem when our feathering prop locked out and caused the engine to start and run into the red, shredding the water pump impeller. To top it off, not much later we blew our spinnaker, right before we were about to drop it and lost any chance to keep up with the fast boats.” Summarized Andy Morgan, owner of Jetwave Avalon when asked about his day. 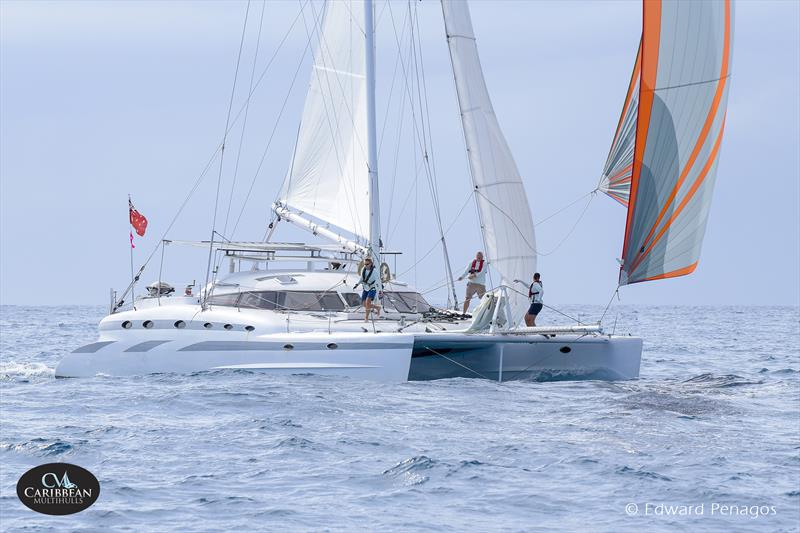 After Plum Bay it was Le Tri who showed true tactics by hugging the coastline closely. Owner Fabrice Maitre had the benefit of local knowledge on board with the experienced local Melges 24 sailors Andrea Scarabelli and Christopher Marshall. The decision to sail close to shore made perfect sense for this 42ft trimaran and it shows in the results. 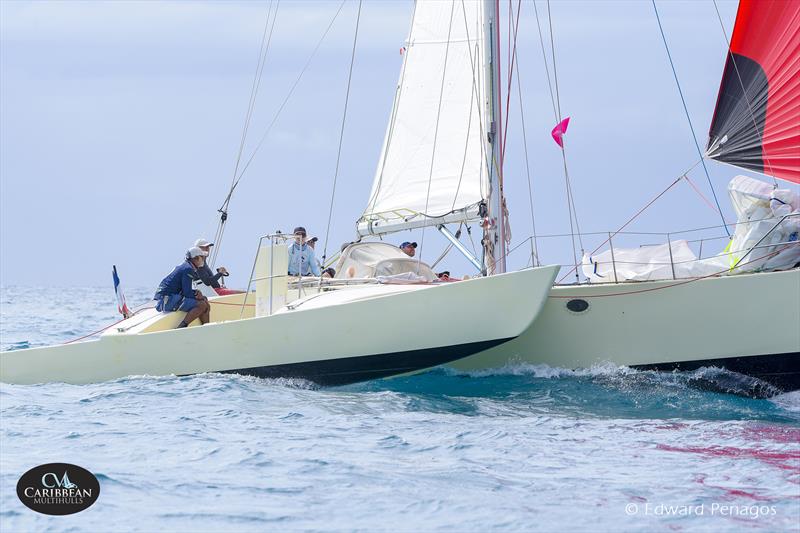 The bigger and faster cats made it back to Simpson Bay in just over 2 hours, with Nemo taking line honours. 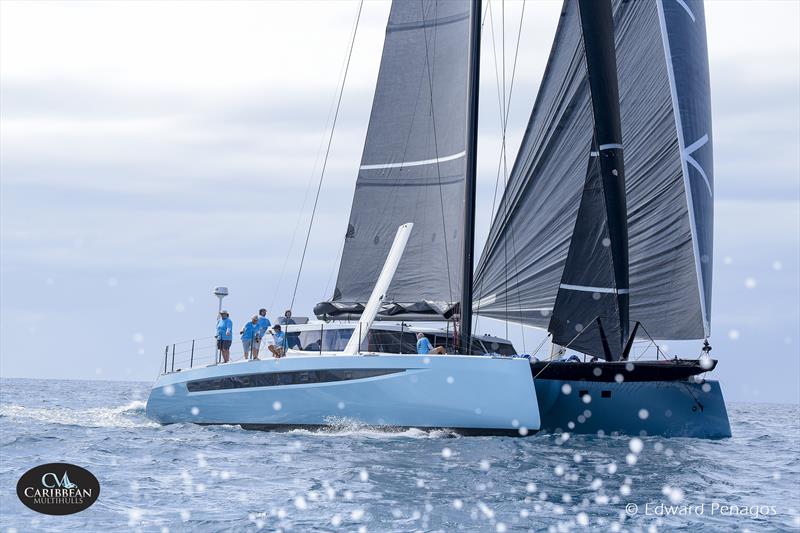 Race two was a much shorter race taking the racing fleet back to Plum Bay, this time the wind picked up and made for some real cat and mouse action between some of the boats. Especially Jetwave Avalon and Le Tri kept the game up, with Jetwave Avalon stealing Le Tri’s wind twice. Le Tri kept the distance using its kite, an option that Jetwave Avalon no longer had after losing it in race 1. Avalon praised the crew of Le Tri on their tactics during race 2.

It was Enola, a KL28, who showed that consistency pays off, with two second places they won the Yacht Club Port de Plaisance Race Day 1 in racing class. “We didn’t expect to win today, but we had a perfect day, the boat ran well, and the crew, consisting of Patrick Moulinneuf, Sebastien Michaux and Sylvain Corroy, did a fantastic job. We have been racing together for many years and with this team it simply works.” Said boat owner Mitch Sylvano. Tryst came in second place, followed by Le Tri in third. 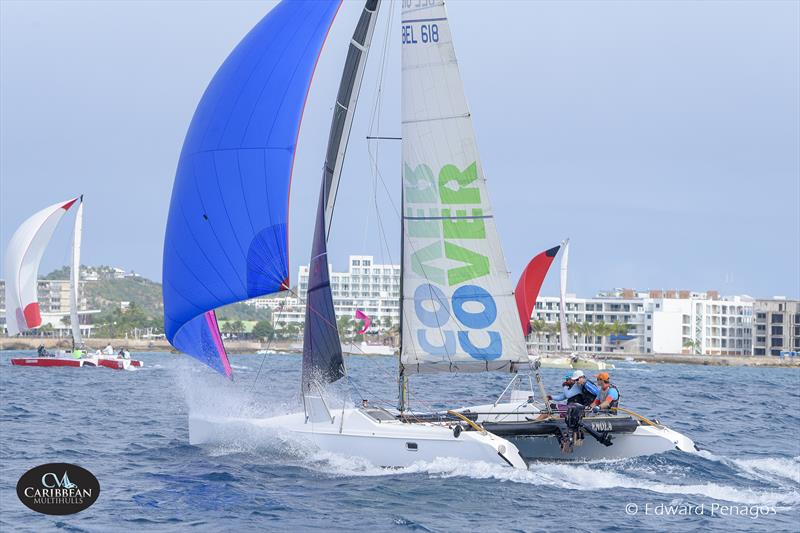 Meanwhile in the cruising class there was spectacularly tight racing between Aravilla/Maritime School West Indies and Seaduction, a Leopard 46 and Leopard 47. On race 1 Aravilla/Maritime School West Indies started off with a reef in the main, allowing Seaduction to get ahead of them. “If it was just a matter of taking the reef out, we would have done it a lot sooner, but when the wind really died down, we realized the halyard was tangled and we had to send someone up the mast before we could shake out the reef. Frisner, from our Kidz at Sea Program was the star today by going up the mast and sorting the problem.” Stated Iain Mobbs, sailing instructor for Maritime School West Indies. Although it made a difference as they gained on Seaduction, they just couldn’t beat them over the line. On race 2 Seaduction encountered a similar challenge when they could not get the spinnaker up and realized the spinnaker halyard was wrapped in the jib halyard. Mario Jonker, son of the owner Petro Jonker, was hoisted in the mast and they managed to sort out the issue, keeping the competition going all the way to the finish, this time Aravilla/Maritime School West took line honours. 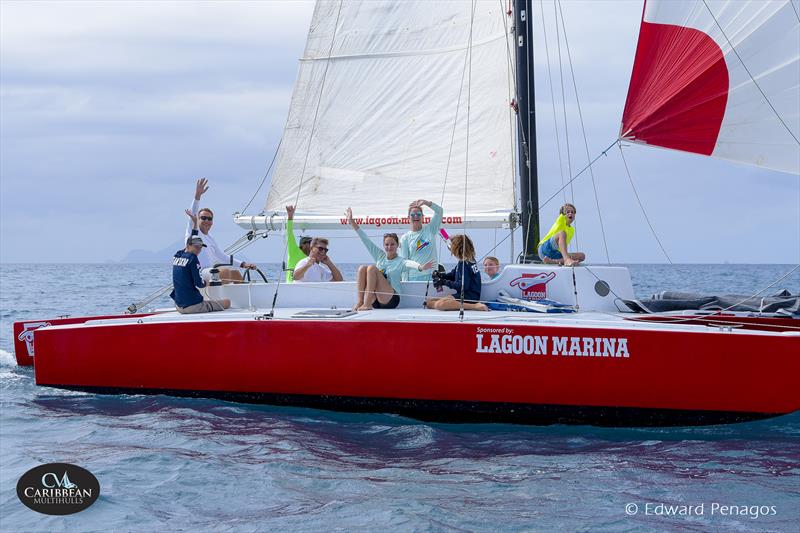 Dana Clark purchased Aravilla/Maritime School West Indies only a month ago and met Garth Steyn, owner of the Maritime School West Indies, who not only convinced him to race in the Caribbean Multihull Challenge, but also offered to sponsor him and help him with crew through his Kidz at Sea Program. 3 newly graduated sailors got the opportunity to race for the very first time on a catamaran and were put hard to work, alongside veterans of the Sint Maarten sailing community, Rien Korteknie and Jon Westmoreland.

“This is the perfect way to learn, I have never sailed a catamaran before, having grown up jumping on a variety of monohulls, I never expected to be racing my own catamaran. I had an amazing crew and that just made my day.” Said owner Dana Clark who was seen on the bow with two thumbs up and a big smile on his face.

With two bullets Aravilla/Maritime School West Indies took the overall win on race day 1, leaving Seaduction in second place. Both crews are looking forward to getting back on the water and see what tomorrow brings.