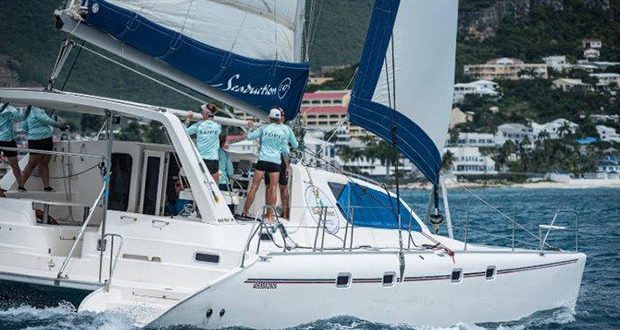 On a gray, squally morning off the lovely French beachfront community of Grand Case, the last boats standing in what has been an extremely eventful second edition of the Caribbean Multihull Challenge set forth on the third and final day of competition.

With punchy, shifty breeze ranging from 10- to 20-knots, and intermittent showers, it was a day that rewarded diligent and efficient boat-handling. And several notable boats put the exclamation points on three days of solid performances to wrap up class victories in convincing fashion.

For the grand finales of the series, principal race officer Marc van Dongen sent the fleet on a trio of different courses. CSA Multihull 1 went on a 27.5 nautical mile race that crisscrossed the Anguilla Channel twice; CSA Multihull 2 and 3, and the Pirate Class, sailed a slightly shorter 16.5 n.m. jaunt with a single dash across the channel; and the MOCRA Multihull class for the division’s two remaining MOD 70s (Shockwave did not compete after breaking its boom on Saturday), sailed a 47-n.m. contest that did a couple of turns off Anguilla before a long leg down the south coast of St. Maarten and around Isle Fourche. Everyone finished off Simpson Bay. 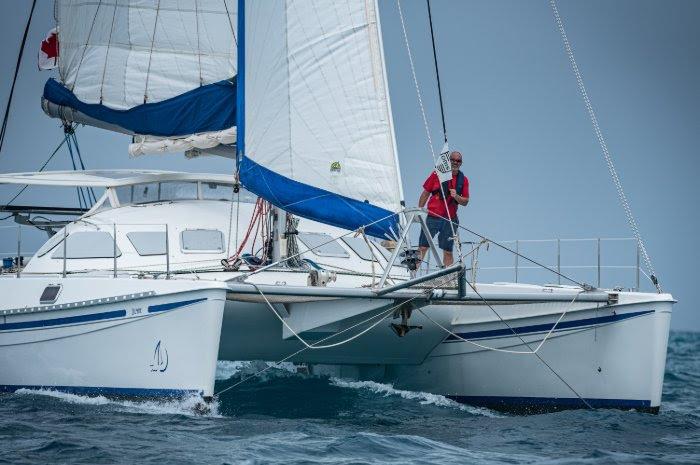 In CSA Multihull 1, Finn, Brett Trevillian’s Banuls 53 tri, continued her dominating ways. With its white hulls, black sails and futuristic dome, to many observers—including this one—Finn is by far the prettiest girl at this dance. Crewed by a team of crazed Aussie cowboys, the 53-footer once again hit the starting line on time and with pace, and immediately put the pedal to the medal. Those dudes can sail.

With the breeze on and whitecaps flecking the waters, CSA Multihull 2 and 3 took the day’s second, combined start with the merged classes well spread out. George Coutu’s extremely well-sailed Leopard 50, La Novia, took the pin and was higher and faster than everyone in the early going, but Ian Martin’s crew aboard the Leopard 45, Spellbound, was the first yacht to bear off and set a kite, and was quickly in business.

Ironically, for the last start, the two Outremer’s in the Pirate Class—an old one, David Slater’s vintage 45-foot Delphine, and a new one, Rüdiger Schiller’s 4X Tortuga—put on some of the best racing in the event, in the division supposedly comprised of more mellow cruisers. The two boats were only a boat length or two apart at the outset, and presented a clear and striking example of French catamaran design over the decades. 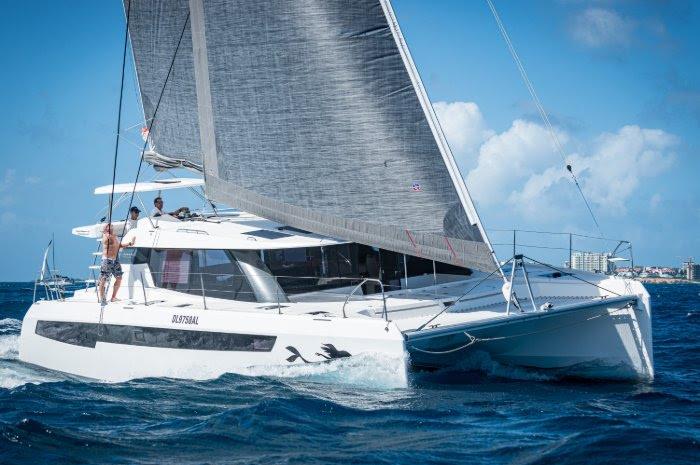 Last but hardly least was the big MOD 70s, Giovanni Soldini’s Maserati and Jason Carroll’s Argo, with the latter crew looking like bumblebees in their matching yellow and black dry suits. Interestingly, Maserati went with a single reef in the main while Argo sported a deeply double-reefed mainsail. Like an America’s Cup match race, the two boats sparred before the start, with Argo the aggressor, working to windward of Maserati and getting a solid start, with Soldini’s mates a solid 10 seconds in arrears. But with more sail area, that all changed quickly. Moments into the race, Maserati changed to a bigger headsail and blasted into the lead with authority. It was a stirring sight watching the two giants slashing across the channel, a pair of rangy water bugs, their amas looking like long tentacles kissing the tops of the seas.

Soon enough, Finn, Maserati and Argo, in that order, re-emerged from the mist at a turning buoy off Marigot on this murky, very uncharacteristic Caribbean day. Finn had changed up to a full main by this point, and continued to look special. Maserati’s lead over Argo had opened up to a good five minutes. It had been an up and down regatta for the Italians, starting on Day 1 when they hit something early in the first race and were forced to retire. But it was definitely all coming together on Day 3. 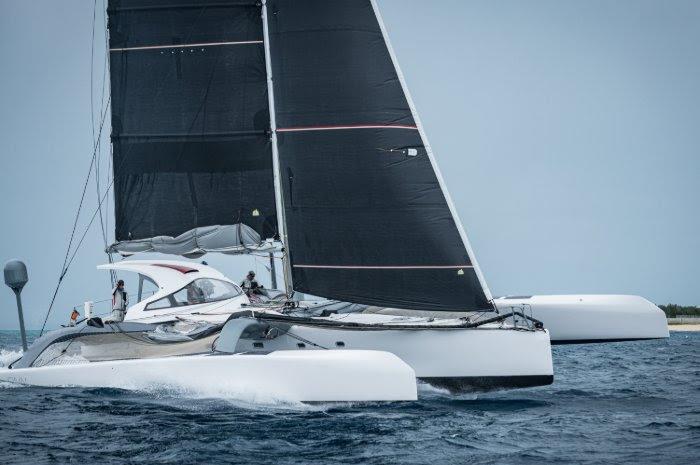 By early afternoon, the entire fleet was approaching the finish line. Fittingly, the rain had stopped and everything else was also becoming crystal clear, especially the final standings. Finn put the capper on an outstanding regatta with its fourth straight victory to win CSA Multihull 1 going away. And while Maserati won the day against Argo, with its second on Day 3 the American boat earned the overall victory in the MOCRA Multihull division. All Argo had to do on the final day was finish, which perhaps explains its conservative tactics.

Tryst won CSA Multihull 2 by virtue of its two firsts on Day 1; beset with various issues, no CSA 2 yachts competed on Days 2 or 3. With three firsts in four races, including on Day 3, La Novia was the clear victor in CSA Multihull 3. The extremely well-sailed Delphine also took three out of four contests in the Pirate Class, including the final one, proving an old cat is certainly capable of tricking the newer ones. 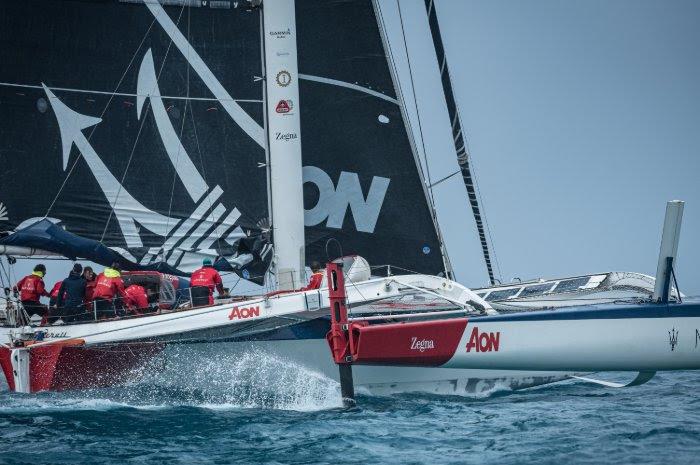