The second event of the 2021 GC32 Racing Tour kicks off next week, once again in Lagos on Portugal’s Algarve.

The first two events of the new season for the World Sailing-approved high performance foiling catamarans are being held in the same venue to limit travel and simplify logistics complicated by the pandemic.

Coming in race fit to the GC32 Lagos Cup 2 will be several skippers and crew who competed last weekend at the British stopover of SailGP in Plymouth. 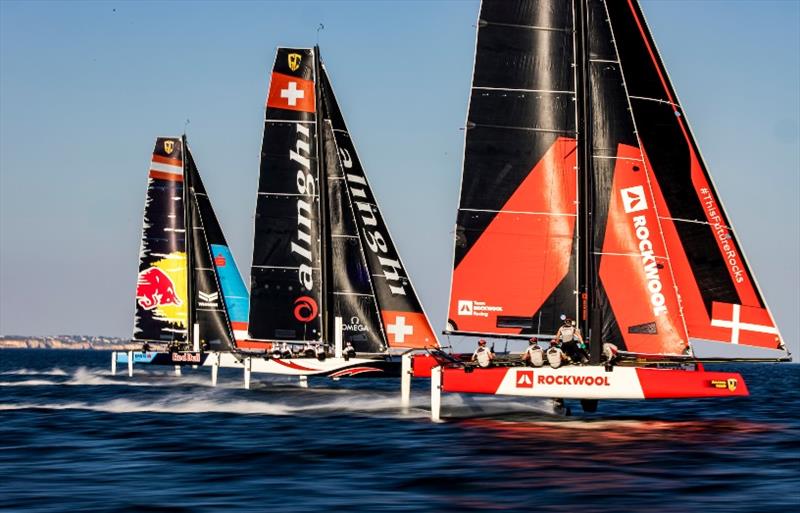 Alinghi’s co-helmsman Arnaud Psarofaghis was standing in for Peter Burling on the helm of the New Zealand boat. Ernesto Bertarelli’s team remains the sure-fire favourite in Lagos: Their line-up is unchanged from when they dominated the GC32 Lagos Cup 1 – out of 16 races they sailed they only finished off the podium once. They also won the 2019 GC32 World Championship on these waters.

Time spent in the faster, wingmasted F50 won’t have hurt Psarofaghis. With a wing and extensive hydraulics (compared to the GC32’s conventional rotating wingmast and softsails, and rope controls), Psarofaghis acknowledges that the F50 is different to the GC32, but “it is not too difficult to make the change. The F50 is faster, so it is a good lesson in anticipation, seeing things coming quickly. Some of the tricky manoeuvres we can do easily on the F50 are a bit less easy on the GC32, but there are some improvements we can all do there with more time on the water.” 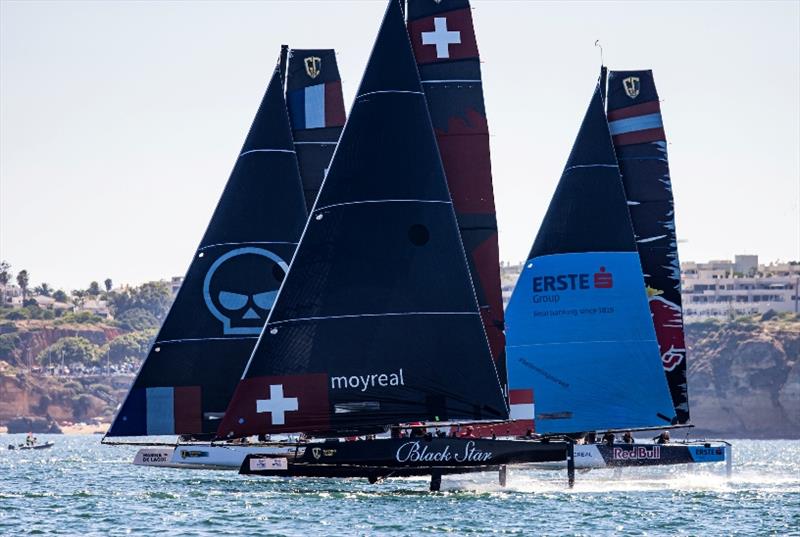 Psarofaghis is certain that as the GC32 Lagos Cup 1 was the first GC32 event raced since November 2019, the level across the fleet is rising rapidly. “I am sure everyone has learned a lot of lessons and will improve a lot on a few details. It will be harder for us to stay ahead.”

Also racing in Plymouth was Team Rockwool Racing. Finishing on the podium and winning two races at GC32 Lagos Cup 1 was an acceptable result for the Danish team’s first ever GC32 competition. The greatest steps forward are likely to come from them. “Throughout the four days we improved – we were finishing second last or last on the first two days and making top twos in the last two days,” says skipper Nicolai Sehested of the first event. “For sure we made some big improvements.” 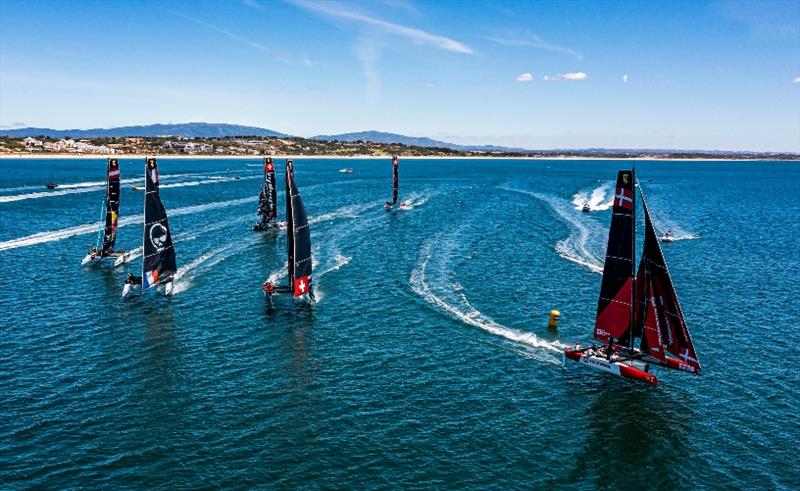 “The way of sailing these fast boats – the decision making, lay lines, starting, etc relate. In Plymouth we didn’t do so well in the starts, so that will be one of our focuses.” In Plymouth the course laying was so accurate that they were called OCS when their weather hull was over by just 15-30cm. “And that was at 50kmh!”

Sehested’s objective is to claim the second step on the podium.

The other GC32 rookies in Lagos were the Swiss Foiling Academy. The team led by Julien Monnier and Loic Forestier will be looking to raise their game for their second ever GC32 event. So too will the French Zoulou team led by Erik Maris, the GC32’s longest standing competitor and currently the sole owner-driver (others will return later in the season as travel restrictions ease). 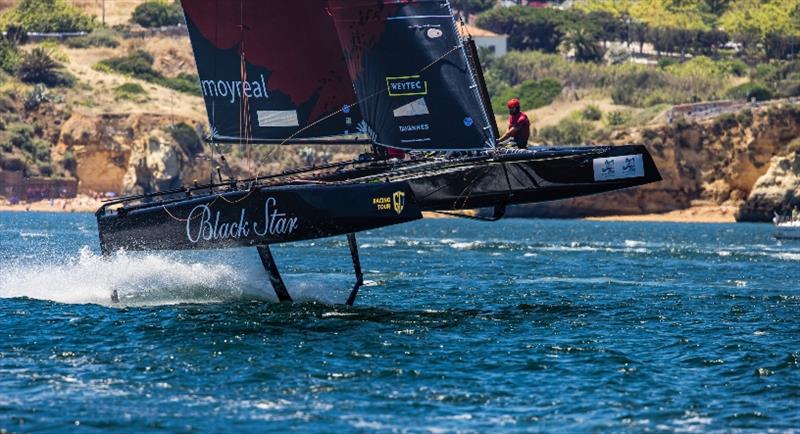 Roman Hagara will not helm Red Bull Sailing Team in Lagos due to his responsibilities as High Performance Coach for the Austrian Nacra 17 and 49er teams. Their aim is to secure Austria a gold medal in Tokyo as the last summer Olympics when Austrians brought home a gold (across all sports) was when Hagara and Hans Peter Steinacher became Olympic champions in the Tornado catamaran at Athens in 2004.

As Hagara says: “I will miss the next GC32 Racing Tour event in Lagos due to my commitments to the Austrian Sailing Federation, so I will be at Enoshima for the Olympic Games. But I have a really good guy standing in for me in Nathan Outteridge, who is a 49er gold medallist and a SailGP skipper and who is highly decorated. So I hope he can set a mark and can beat Alinghi, which is our big goal for this season.” Outteridge is skipper of Japan’s SailGP team. 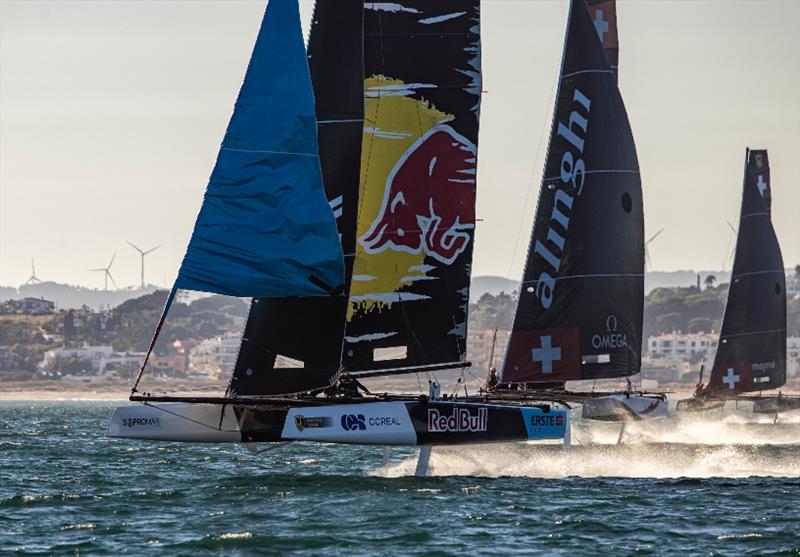 Meanwhile Christian Zuerrer’s Black Star Sailing Team finished the GC32 Lagos Cup 1 one point shy of the podium. This would have been different had they not dismasted on day two (fortunately the GC32 family came to the rescue and Black Star was able to continue racing with a spare bottom mast section kindly provided by Zoulou and shrouds and forestay from Alinghi). “Apart from the mast break, we were playing with the other teams,” says Zuerrer. “It was a bit of a rollercoaster. After one and a half years away, it was not easy for anyone, but the level was quite high between the teams. We have improved a lot and are getting closer. Our comms are better.”

As to the venue, Lagos first timer earlier this month, Nicolai Sehested is looking forward to it: “It is a fantastic place – 20-25 knots and flat water is perfect. It is one of the best venues you can have for GC32 sailing.” 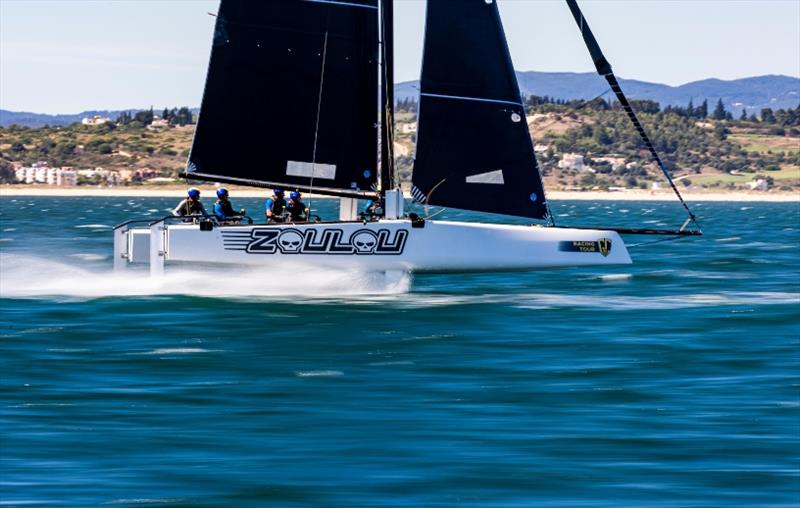