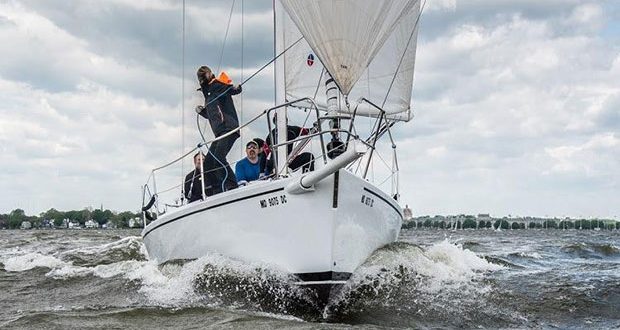 Anticipation was high on the morning of the first day of the Helly Hansen NOOD Regatta Annapolis where 153 teams have assembled to race in the Chesapeake’s first major regatta of the season. With a wind forecast predicting gale force winds, however, the sailors were sent home early to wait it out until tomorrow.

“We were seeing sustained 27 knots at Thomas Point [lighthouse],” said Annapolis YC’s Race Director Kevin Reeds. “The spikes were getting consistently higher and the waves were already 3 to 4 feet.”

While some sailors were disappointed with the day’s cancellation, most were happy to sit out what would surely have been a gear-buster of an outing. With two more race days ahead, the general sentiment was to preserve boats and sailors alike.

“It was definitely the right call,” said Terry Hutchinson, a professional sailor who’s raced in conditions far more extreme over his long career. “If there’s red flags going up everywhere, that’s a good sign to not do it.”

Hutchinson and his teammates, as well as many others at the Annapolis YC sailing center used the opportunity to work on their boat and ensure it was ready for an earlier start time Saturday morning. 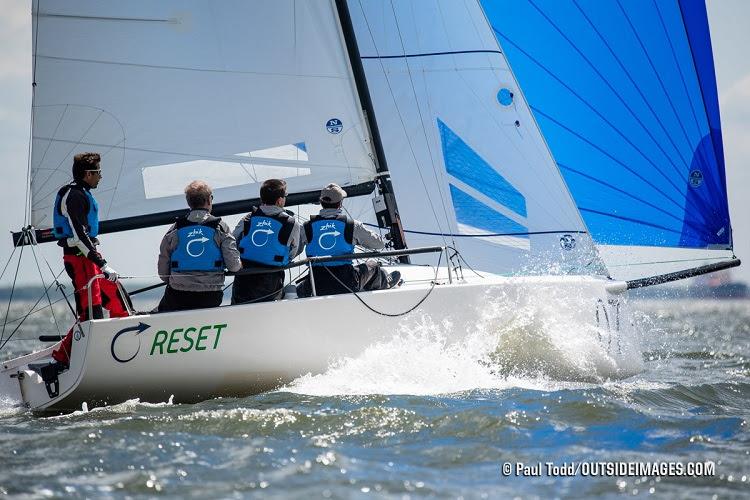 Skipper Peter Barrett and crew of the J/70 “Reset” use the opportunity of a high-wind cancellation on the opening day of the Helly Hansen NOOD Regatta Annapolis to get in some practice. – photo © Paul Todd / www.outsideimages.com

But not all teams stayed ashore. Several took to the harbor to gain some invaluable high-wind sailing experience, including Doug and Amy Stryker, who rallied their teammates onto the bay for a few hours practice in their J/105 Mayhem, which is virtually new to them.

The Strykers recently purchased the used J/105 from the U.S. Naval Academy and have put more than 300 manhours into make the boat race ready. Today’s practice, says Stryker, was about making sure the crew race ready as well.

“This will be our third time sailing it,” says Doug Stryker, “and it was our first time sailing it in that much wind. Half the crew was at our house this morning and I said, “Let’s go practice,’ and they, said ‘absolutely not.'”

Stryker convinced them it would be a good use of their unexpected downtime so they relented and hoisted their sails as the wind whistled through the marina.

“We mainly wanted to make sure all the sails went up and down,” Stryker says, “but it was also about building confidence with the crew. I wanted to show them this boat is easier to sail than the J/30 [their previous boat] and they all came in and said it actually really fun.”

They weren’t out there long—just long enough to build the confidence they need to take on the regatta’s 21-boat fleet. The Strykers, like many others at the Annapolis NOOD are eager for races, but they’ll have to wait until racing kicks off with the first warning signal at 10 a.m. Saturday.